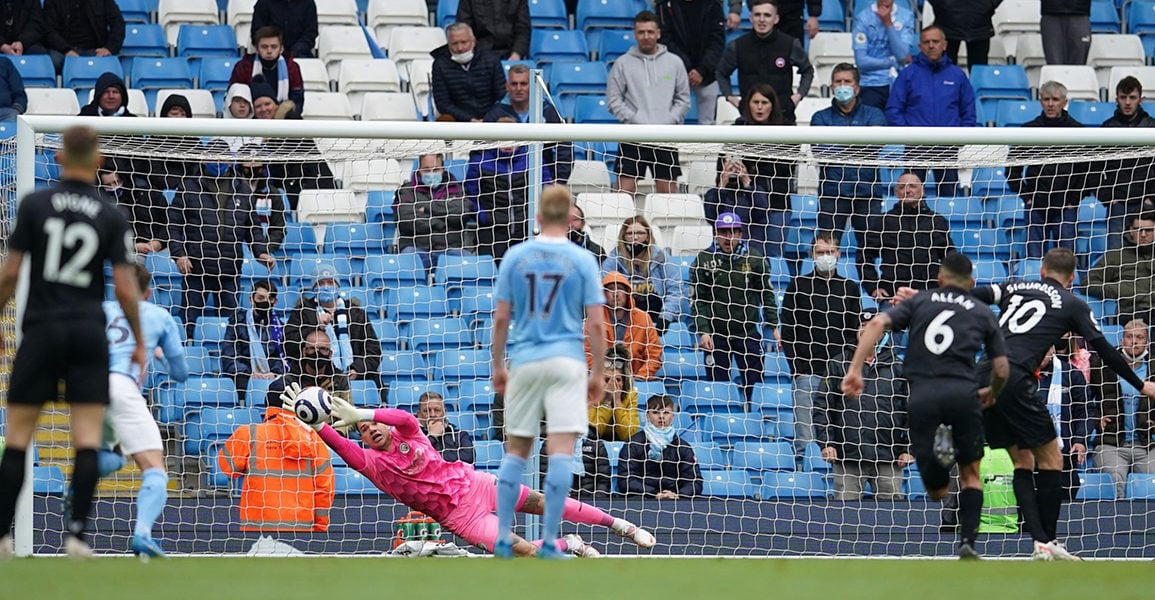 Manchester City warmed up in style for their Champions League Final with a stroll in the park against Everton with Sergio Aguero ending his Etihad career with a brace. Gylfi Sigurdsson spurned a first half penalty as Everton were dismissed with consummate ease by the newly crowned Premier League champions.

Champions Manchester City, hopefully with the Champions League final and a trophy treble on their minds, stood between Everton and a last day of the season European qualification.

With the Carabao Cup and Premier League title already wrapped up, City were expected to roll over Everton en route to Porto and with circa ten thousand fans inside the Etihad, it was down to Carlo Ancelotti and Everton to act as unlikely party-poopers.

Argentinian striker Sergio Aguero will say ‘Adios’ to the Etihad after today’s game, after a stellar career with City that has seen him set a new goalscoring record, and having trained this week, was hoping to play some part in this final game of the domestic season. City, with the Champions League final still to come, had no other injury concerns with Kyle Walker having recovered from and ankle injury playing with his children but, were without the suspended Joao Cancelo following his red card the 3-2 loss at Brighton.

Paying tribute to Aguero City manager Pep Guardiola commented, “First of all I say he’s an incredibly nice and funny person, humble one being the legend he is. Being from Argentina and in this country where it’s so difficult to score goals but he’s done it for many years. I can’t imagine how many more goals he would have scored if he was able to be fitter than he was in some periods. Sunday’s the last game, I’m sure the fans will show for the fans all around the world for City, and will give him a tribute to what he has done so far. His titles, numbers, performances, incredible.”

On Everton being the opposition, Guardiola remarked, “Carlo is someone I admire greatly as a coach and a person, and his team come here still with a chance of qualifying for European football next season. They will not make it easy for us, I’m sure.” Pep also echoed comments from every manager this week when he added, “It is also fantastic to greet City fans back into their home ground after such a long absence. We have missed the supporters so much.”

Would Guardiola play a second string side and save his strongest team for the Champions League Final, we found out at 3pm when he unsurprisingly named a strong starting line-up: Ederson, Walker, Stones, Dias, Zinchenko, De Bruyne, Fernandinho (c), Foden, Mahrez, Jesus and Sterling.

For Carlo Ancelotti and Everton, the task was simple to determine. Beat City, hope Leicester beat Spurs and Brighton take at least a point from Arsenal, and the goal of European football for next season would be achieved, albeit at the 11th hour and 59th minute when it could have been secured weeks ago. All much easier said than than done obviously but, with practically nobody giving Everton a snowballs chance in a furnace of taking anything from the Etihad, Carlo and the team knew exactly what had to be done.

On Friday, Carlo Ancelotti said Everton are “mentally and physically” primed for the “most important” game of their season at Manchester City on Sunday. Speaking to the press he said, “I said we wanted to fight until the last minute of the last game and we are there to fight… with all our motivation and all our energy. We know it will be, maybe, the most difficult game [of the season] against the champions but we are confident because we did really well away.”

He expanded, “We had fantastic results against strong teams. The motivation is really high, the pressure also, but this is absolutely normal. This is the most important game of the season but mentally and physically we are ready. It doesn’t matter who plays for Manchester City, they have a fantastic squad and fantastic idea of football. We expect the best Manchester City possible. I don’t think they will be thinking about the [Champions League] final, it is in one week. They will play this game at their best.”

Everton went to the Etihad without Seamus Coleman who picked up a knock in the victory over Wolves available to start and, James Rodriguez already on his way to represent Colombia in the Copa America in Argentina. Ancelotti said, “James Rodriguez is unfortunately not available for this game. He has not recovered from the problem with his calf. Unfortunately he did not finish the season well. Now he will be focused to prepare for the Copa America with his national team. I hope to have him back next season at his best. “I think the Copa America is in his mind now [his season is over] but he was really disappointed not to be able to help the team in the final part of the season. But he has to be ready for the start of next season and to try to avoid the problem that he’s had. Also, Coleman had a problem during the game against Wolves and will not be available but, he will support the team as a captain.”

On Saturday evening, Rodriguez tweeted a photo from his private plane to South America in which he looked anything but disappointed to be missing the game against City. The photo was probably intended to boost his countrymen and family but, went down like a lead balloon with swathes of Evertonians.

On a cool and breezy afternoon, Michael Oliver was the appointed referee.

Everton, in the new black with salmon slash away kit, gave City a guard of honour onto the pitch and then a special private welcome to the departing Sergio Aguero.

A steady opening to the game saw City with most of the early possession but, Gylfi Sigurdsson having the first effort on target with Ederson gathering easily. An excellent ball down the right wing channel from Sigurdsson then released DCL and Ederson saved low to his right hand side. City countered with De Bruyne finding Jesus and Pickford making the save at the expense of the first corner.

Richarlison was booked inside seven minutes for a foul on Mahrez, the free kick saw Stones head over the bar. As expected, City began to settle and dominate possession, and the opening goal came on eleven minutes as De Bruyne took a pass from Mahrez and from just outside the area, he bent his shot beyond the full stretch dive of Jordan Pickford.

And barely three minutes later, Keane lost possession in midfield, City jumped on it and Jesus was single-minded in ignoring options and duly buried his customary goal against Everton to make it two-nil.

Not that they were unduly worried at the start but City could now totally relax and stroke the ball around almost at will. Richarlison brought down Jesus and needed to be careful having already been booked, City not making the most of the free kick. Allan was caught by De Bruyne who escaped any punishment and inevitably, Holgate was booked for a foul on Foden to give City another free kick that came back to De Bruyne and Pickford made an excellent save low to his left to deny the Belgian a second goal.

A cross from Mahrez saw Holgate concede a corner that was cleared and the next City attack saw Doucoure with a vital interception on a sweet pass from Foden intended for De Bruyne. Everton were struggling to cross the halfway line, while City were in complete control and looking capable of carving them apart at any time, especially with Guardiola on the touchline imploring them to get forward even more.

Everton defended another City corner as we reached the half hour mark and won their first corner as Allan drove forward to find Richarlison who was closed down by Stones to deflect the shot behind. Everton won a penalty on 36 minutes as an excellent through ball from Doucoure saw Dias bring down Richarlison and only get a yellow card, Ederson going to his right saved the Sigurdsson spot kick. Despite the penalty miss, Everton came again with Richarlison seeing a shot from a tight angle blocked and Walker conceding a second corner that led to Digne shooting high and wide.

The sides exchanged attacks with Zinchenko having a shot blocked and then Richarlison likewise before another quick City break saw Sterling feed Mahrez and his shot hit the Everton crossbar.

No changes by either side for the second half and Everton, trailing 2-0 at half time, have never overturned that deficit since the inception of the Premier League in 1992 – another woeful statistic for the club to deal with.

Everton won an early corner that City cleared and then as Digne worked the ball for a cross, De Bruyne closed him down to see the ball out for a goal kick. Sigurdsson put a twenty yard shot over the City bar and Godfrey getting forward won a corner off Zinchenko, Stones clearing the Digne set piece. City responded with some neat passing that ended with Jesus finding Foden and Digne getting a deflection on the shot to send it out for a corner that saw Pickford save from Dias.

Seven minutes into the second half and it was Game Over as Fernandinho got forward to find Sterling and he quickly relayed it right to Foden and his powerful low shot acorss the face of goal gave Pickford no chance.

Doucoure taking a pass from Davies drove a ball into the box and out for a corner off Dias, City again clearing and the first City change came on 56 minutes as Rodri replaced Phil Foden. Everton countered by sending Alex Iwobi on for Abdoulaye Doucoure. After Rodri with his first touch blazed a shot high over the bar, Bernard was the second change replacing Sigurdsson on 58 minutes.

Sterling found by De Bruyne won a corner off Ben Godfrey that was successfully cleared as the home crowd called for Sergio Aguero to make a farewell appearance. Riyahd Mahrez was the City player to make way for Aguero as the change was made on 64 minutes with City impudently putting the ball into touch in order to make the change.

Good work from Iwobi worked the ball forward for Richarlison but Ederson was quick off his line to deny him a shooting opportunity. Sterling was booked for a foul on Godfrey before another sweeping City attack saw Sterling find Jesus who blazed his shot over the bar.

Twenty minutes to play and right on cue, it became 4-0 as Aguero was found by Fernandinho after dispossessing Tom Davies and the Argentinian placed his shot low to Pickfords’ right and inside the far post.

City made their third change when Torres replaced Jesus on 74 minutes and 90 seconds later a long cross from the right flank found Aguero between Keane and Godfrey for a free header and second goal.

Richarlison replaced by Niels Nkounkou was the third change made by Carlo Ancelotti.

City were still hungry for goals and it took an excellent save from Pickford to deny Aguero after Fernandinho and De Bruyne carved the Everton defence open like a knife through hot butter. Holgate with a full length stretch conceded a corner in denying Aguero another chance, Everton surviving a Fernandinho effort.

City, who could have been forgiven for easing up refused to do so and kept coming forward, Zinchenko seeing a shot blocked and Fernandinho firing over the bar and as we hit the 90-minute mark, the only question remaining was whether City could forge a hat-trick for Aguero in the two added-on minutes. Pickford denied Sterling and with City content to play keep-ball, the clock ran down.