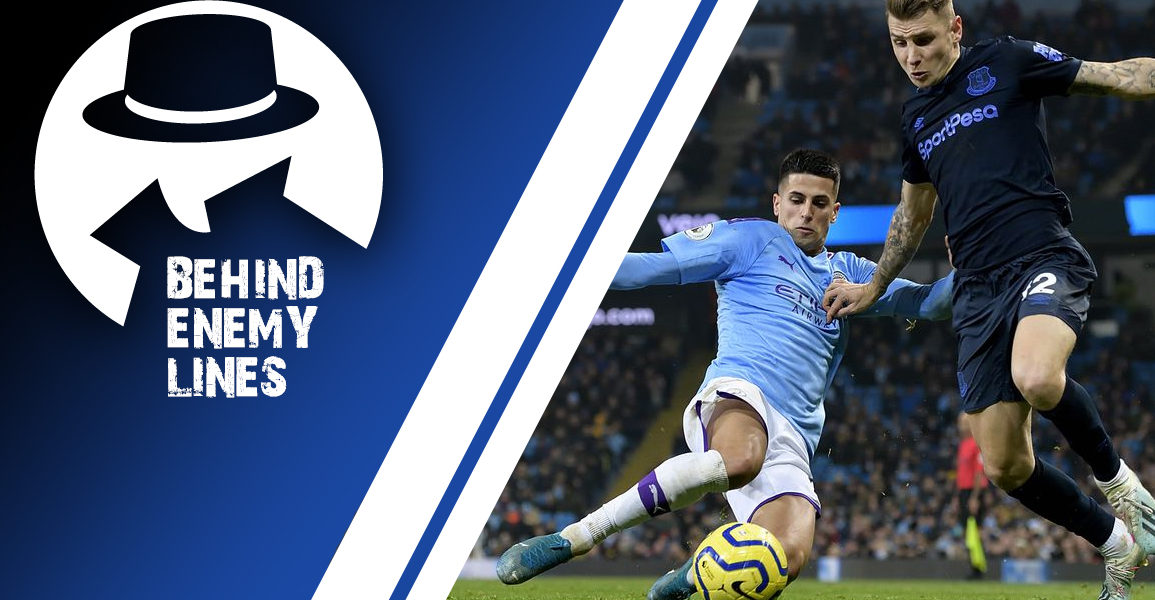 Behind Enemy Lines: Manchester City (A)

You couldn’t have picked a more difficult fixture to hand Everton on Sunday, who travel to the Etihad Stadium to take on the newly crowned Champions of England. With the prospect of European football somehow not yet lost, avoiding defeat could end up being crucial for the Toffees and the realisation of their primary goal for this season.

City, on the other hand, have accomplished all of their objectives in regards to league play, and so it is likely they will rest most of their stars for this match. Everton have done surprisingly well on the road against the Greedy Six, winning at Tottenham, Arsenal, and Liverpool, and drawing at Old Trafford thanks to Calvert-Lewin’s dramatic late equalizer. That leaves only Chelsea, who are in fact the only team in the Top Half who got all three points when hosting Carlo Ancelotti’s side, as Everton also defeated Leicester, West Ham, and Leeds during their travels.

That bodes well for the Toffees, but Manchester City are a much more difficult proposition than any other side in the league. Defeating them at the Etihad is not impossible though, as proven by Leicester, Manchester United, Leeds, and most recently Chelsea. However, none of those games had any attendance, and the Etihad will welcome fans back into the ground for the first time in over a year on Sunday. With all those factors in play, it’s still an opportunity for the Blues, and that is the way Everton must view it in order to achieve the result they so desperately need.

As it is the last Behind Enemy Lines episode of the year, I decided to invite a special guest, my good friend Justin Ruderman. Justin and I played youth football together for 5 years, and I trust his opinion about City more than anyone else’s. Here’s how our conversation went:

Q: Manchester City, although already Premier League and Carabao Cup Champions, have yet to achieve their ultimate goal this season, but will have the opportunity to on May 29th when they face Chelsea in the Champions League Final. How much will the result of that match change your perspective on City’s 2020/21 campaign?

A: Whether we win the Champions League or not, this season has been successful. After all, reclaiming the Premier League title was no small feat, especially with our poor start to the season. Having said that, the result of the UCL Final will largely change my perspective on the season. If we do lose it would be a massive disappointment as most Cityzens believe this is the perfect chance to claim our first Champions League title. Our two trophies would still be cherished, but this season would be remembered as the one that got away. Alternatively, if we are able to lift that beautiful trophy on the 29th I don’t think there is any debating that this would be the best season in the history of Manchester City.

Q: City have been brilliant this season despite not fielding a proper striker for the vast majority of their games this season. With Haaland and Kane potentially available, what does your dream summer window look like?

A: This is a topic of serious debate on City Twitter, so it’s unlikely that any two City supporters will agree, but I will tell you my dream summer window. First, I will say that of course Messi is the dream signing, but I don’t see that as a realistic possibility so I’m not going to include it. Additionally, reports have indicated that even through this pandemic, Pep will be heavily backed in the transfer window this summer to fend off any challengers for next season’s Premier League.

Starting from the back, we obviously don’t need any help at the goalkeeper position with Ederson claiming back-to-back Golden Glove awards. In the back-line, we likely need a new left-back as Cancelo can fill in but is naturally a right-back, leaving Zinchenko as our only real left-back. My pick to fill this absence is Benfica left-back Alex Grimaldo. We have recently been linked with Grimaldo and it seems a perfect fit. We have had great success with Benfica products and he can slot in on the left of Dias, whom he already has a good relationship with, as he obviously just came from Benfica this season. In midfield, I personally don’t believe it is necessary to add anyone with Fernandinho reportedly returning for one more year, but it seems likely we replace him now rather than wait in order to prevent the struggles similar to those we saw early this season with Aguero injured or after losing Kompany last season. My Fernandinho replacement would ideally be Declan Rice.

Now, the Haaland vs. Kane debate. For the past few months I have been wrestling with this conundrum and until recently I thought Haaland had to be the main target because of age and potential. With Kane, we know what we would be missing out on, but on the other hand we also know what we would be getting. We would have one of the top strikers in the world who would thrive in a Pep Guardiola system and produce a minimum of 35 goals per season with double-digit assists and I struggle to see any team in England or even Europe being able to reach a City side with Kane. For these reasons, I think Kane has to be the main target and somewhat controversially, I am in favor of swapping Gabriel Jesus as part of the deal to save money.

Q: What are your thoughts on Everton’s season and the job Carlo Ancelotti has done at the club so far? Do you feel that Everton are progressing as they should be, or do you feel that Farhad Moshiri’s project is stagnating again?

A: Early in the season I was very impressed by Everton. The new look midfield with Allan and Doucoure looked really strong and of course James was a fantastic addition. At that point, I saw Everton finishing in a Europa League spot. Everton have certainly had their share of injury problems, but ultimately after such a glowing start, their season has to be considered a disappointment. I think the true test of whether the project is progressing will be the summer transfer window. While Everton didn’t massively improve in the table this season like West Ham, the squad certainly got an upgrade with the likes of Allan, Doucoure, James, and Godfrey as well as DCL coming into his prime. If Everton can continue to improve the squad I expect a better challenge for Europe next year, but if not, Everton will likely remain European wannabees from my perspective.

Q: Evertonians share a similar sentiment in that Pep’s Guardiola’s squad selection may give the Toffees a lifeline in this fixture considering that the final takes place just 6 days later. What do you expect in terms of City’s lineup?

A: You’re asking me to predict Pep roulette? I’ll give it a shot. While I agree the final will affect Pep’s selection on Sunday, I don’t think there will be as much rotation as Evertonians may be hoping for. Pep confirmed that Ederson will start, so you won’t see Scott Carson again, and the back line is likely to be strong as well. Cancelo is suspended so Walker will start at right-back. I expect Dias to start because he had a rest against Newcastle. Laporte is likely to partner him, giving Stones a rest in preparation for the final, but that isn’t really a downgrade. Zinchenko or Mendy is a toss up but I’ll say Mendy gets the start since I expect Zinchenko to start the final. If Mendy does start, it could be somebody for Everton to exploit. The same can be said for Eric Garcia, whom Evertonians should be hoping starts more than anyone as we are guaranteed to concede goals, something City supporters have started referring to as the Garcia Tax.

In midfield I fully expect Kevin De Bruyne to be rested as he is coming off an injury, which will certainly help Everton. I think it is quite likely we see the same midfield three as we have the past two games with Rodri, Gundogan, and Bernardo, though Pep could give one of these a rest. I don’t expect Fernandinho to start for the same reason as Zinchenko. In attack, I anticipate the most rotation. My predicted front three is Sterling, Jesus, Torres because I don’t believe any of them will start the final, while Foden and Mahrez are likely to be rested, and Aguero is coming back from a minor injury so I expect him to get his final Premier League minutes off the bench.

Q: With all that in mind, who will win on Sunday at the Etihad and why?

A: Despite our recent defensive woes, I still fully expect a City win at the Etihad on Sunday. Pep will have an agenda to sure up the defense to get us back on track before the final. I anticipate a game where we dominate possession as we focus on controlling the game with Everton defending a lot, but I don’t think we will create a ton of chances. It could make for a boring first half and potentially not the most entertaining match overall, as City are likely to be more focused on defensive solidity rather than attacking prowess after conceding three in two consecutive matches. Ultimately, I am predicting a 2-0 City win.

So there we have it! I believe it will be a close game, as Everton have everything to play for and City have next to nothing (not to mention it’s an away game), but even City’s rotated side is likely to be too much for the Toffees, so I’ll say 2-1 to the home side. Subsequently, I think Everton will finish 8th or 9th, depending on results, and will just miss out on European football, which will be a disappointment, but you’d be hard pressed to find an Evertonian who thinks our squad could cope with that anyways. My thanks to Justin for taking the time to answer my questions. He just joined twitter a few weeks ago, so go follow him @JSRFootball and follow me @ParrettGost. It’s been a pleasure producing this series for you all season, and I’m excited to start again in August. Thanks for reading, and as always, Up the Toffees!