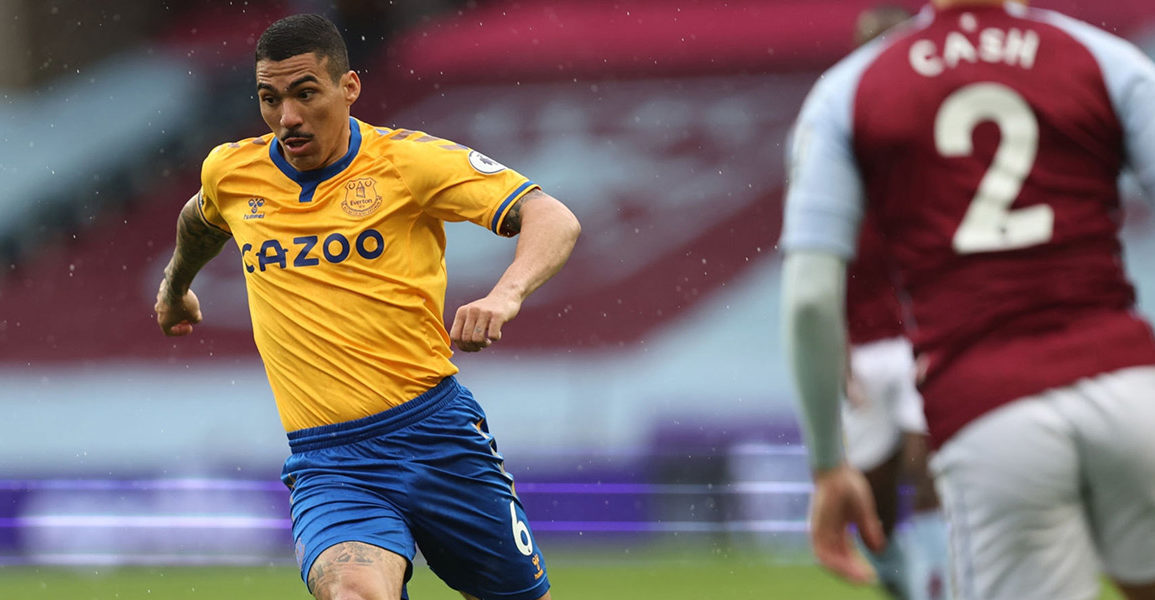 Aston Villa and Everton played out a goalless draw at Villa Park in a game that Everton really needed to win. Villa had more possession but Everton created the better chances without being able to find a way past Martinez in the home goal.

Fresh from a deserved victory at West Ham, the Blues took to the road again on Thursday to Villa Park and a rematch with Dean Smiths’ side, and looking to gain revenge for the loss at Goodison not two weeks ago.

Still seeking a top half of the table finish to their season, Aston Villa saw their cause hampered last weekend when Ollie Watkins marred his impressive debut season in the top flight with a red card for diving against Manchester United. Watkins had caused Everton lots of problems in the game at Goodison, scoring one and making a number of other chances in a 2-1 win for the visitors.

Without Watkins and with Morgan Sansome also out with injury, Dean Smith was pleased to have captain Jack Grealish close to a return and looking to include him on the substitutes bench when he advised on Wednesday, “The latest is he trained with the group yesterday and he trained with the group on Saturday. When he comes in today, I’ll speak to him today and see how he feels. We’ll sit down with the doctor as well and take it from there. I can’t give a positive yes or no. He looked comfortable and he’s a naturally fit player anyway. Is he ready to start games? No, but if he feels pain-free then he’s ready to be a part of the squad.”

And speaking about his sides final run-in Smith added, “We finished last season unbeaten in our last four games, which enabled us to retain our Premier League status. I’d love to go unbeaten again. We’ve got some really good games to play – Everton, Crystal Palace, Tottenham and then Chelsea. They’re ones that the players should be licking their lips for and looking to enjoy. That’s what we aim to do and if we do that, we could end up in the top ten.”

In the other dugout was Carlo Ancelotti and the Everton manager is still focussed on his side being in European competition next season, and knowing that a 12th won on the road would go a long way to securing that possibility.

Looking back at the Goodison loss Ancelotti noted, “We have to play differently, it was one of the worst performances of the season, and we are going to play differently. I counted 10 easy mistakes in the first 10 minutes, easy passes wrong, we lost duels, we were not in position. That is not going to happen tomorrow, for sure. The team has strong motivation for Europe, most of them didn’t play in European competition and they have a desire to be in the competition next season.”

The boss took great heart from the manner of the West Ham win when he added, “The last game was good, it was unpredictable against Aston Villa, it was at home and an important game. We will play differently tomorrow, no doubt. The game is vital, as was the game against West Ham, we know this and, hopefully, the team can repeat the performance from Sunday.”

In injury news, the boss confirmed that Yerry Mina together with James Rodriguez and J-P Gbamin were three definite absentees but was hopeful that Abdoulaye Doucoure might be close to a first team return.

Carlo also took time in his pre-match press conference to praise the efforts of both Tom Davies and Josh King when he said, “Tom is always good defensively, he puts a lot of energy and passion in his play. He is strong in the tackle… a fantastic support for all the team. The next step for Tom is to improve his ability with the ball. Without the ball, he is really good. I am happy with Joshua King… he played parts in important games and did well. He scored a goal and I am really surprised nobody knew this… it was a big mistake.”

On a cool, damp evening in the Midlands, our referee was Martin Atkinson.

Everton in the gold shirts and socks with blue shorts kit looked great but early pressing by Barkley on Seamus Coleman – given no outlet by his team mates – saw a corner conceded, that Villa duly wasted. The home side enjoyed early possession but, the Blues held firm and looked to go forward with Allan playing a ball just behind Richarlison.

A surging run by Godfrey out of defence saw quick passes between Sigurdsson and Richarlison for the latter to feed Coleman on the right for a cross that disappointingly went too close to the goalie and Martinez gathered easily. At the other end, Pickford save easily on a shot from Traore. A cross from Luiz saw Cash flattened after colliding with Lucas Digne, the Villa fullback needing treatment before continuing.

Allan to DCL and onto Digne, and his cross went through to Coleman who chipped it back for DCL but, he couldn’t generate enough power on his header to trouble Martinez. Villa won a second corner as Digne put a cross from Targett behind and it resulted in a low cross from the right by Luiz for Mings to stoop and power his header wide of the goal thanks to DCL being excellently positioned to block had it been on target.

A long ball from Holgate found Coleman and his early cross for DCL saw Villa hurry back to clear and El Ghazi fired high over the bar as Villa got forward again. Twenty minutes gone and with the rain falling, the game needed a spark, preferably an Everton goal, to liven it up.

More Villa possession led to a good break out of defence by Allan saw McGinn foul him and lucky to escape a yellow card ahead of Digne fouling Traore to give the home side a free kick that saw Richarlison head behind for a third Villa corner that they again made a complete mess of. Richarlison ‘bought’ a free kick in shooting territory for Digne and Sigurdsson, the latter taking and not getting enough power or direction on the shot that went straight into the waiting hands of Martinez.

Godfrey played safety first to give away another corner and once again, the home side naused it up and Everton cleared easily. Getting forward, Sigurdsson and Digne worked the ball to Allan who fed Richarlison on the edge of the area but, his fellow Brazilian couldn’t hit the target with his shot. McGinn found Barkley on the edge of the Everton area and his first touch let him down badly and he compounded the situation when found again, and Everton again cleared their lines easily.

Coleman away down the right again sent a crossfield ball to Digne and his cross to the back post was just too far ahead of DCL to get on the end of. Keane to Sigurdsson and a quick ball through the middle for Richarlison saw Mings get in quickly to get the ball back to Martinez. Into the final five minutes of the half and Holgate put a cross from El Ghazi behind for another Villa corner and you guessed it… Villa wasted it.

Digne went down under a challenge from Cash as Villa looked to break away and that ended with Traore diving blatantly and referee Atkinson immediately, and quite rightly, showed him the yellow card. Digne needed some treatment and with half time looming was probably looking forward to the break.

One added minute was signalled and that saw Cash and DCL go down off the ball, DCL clutching his right knee; Villa immediately replacing Cash with Elmohamady. Thankfully DCL carried on for the few seconds remaining before referee Atkinson blew for half time.

No further changes during the interval saw Villa kick off the second half and Barkley find Richarlison to launch an Everton attack that saw a shot from Doucoure blocked and cleared. Another attack saw Everton move the ball well and end with Doucoure looking to thread DCL through, his first touch wasn’t great and Martinez was able to gather the ball.

Good work by Coleman drew a foul from McGinn and Sigurdsson lofted it to the back post where Godfrey arrived and Martinez did well to turn it away for the first Everton corner, that disappointingly saw a free kick awarded against Holgate. There was more purpose about Everton in the early minutes of the second half, Villa being pressured and Martinez beating DCL to a cross from Digne.

Sigurdsson was booked for a pull on Luiz to ease the pressure. El Ghazi on a break got free of Coleman and Holgate, Ben Godfrey arriving to block the cross out for a corner that after a bout of push and shove saw Everton get the ball clear and forward for Mings to clear in hurry to prevent DCL getting on the end of a ball from Sigurdsson.

Pickford punched away a free kick from El Ghazi for a corner after a foul by Keane, Barkley finding Traore and his laughable shot resembled a rugby conversion. Luiz brought down DCL and Villa looked to warm up Grealish as the game clock passed 63 minutes, Holgate heading the free kick straight at Martinez – boy did the game need a goal.

Konsa did well to cut out a ball from Richarlison intended for DCL and when the ball came to Gomes, he junked away from his marker only to bend his shot far too high over the target. At the other end Davis laid a cross from Elmohamady into the path of Ramsey and his shot took a deflection behind for a corner that Everton again dealt with comfortably.

Jack Grealish made his return from injury on 71 minutes replacing Traore and taking the captain’s armband from Mings. And his first involvement saw him find Targett for a cross that led to Keane putting a shot from El Ghazi out for a corner that again produced nothing.

Everton made their second change as Alex Iwobi replaced Seamus Coleman on 74 minutes. The game, which Everton badly needed to win, was nearly opened up as a long ball from Holgate found Richarlison and he found Gomes who struck a decent shot that Elmohamady stuck out a leg to deflect away. El Ghazi found by Grealish ballooned another effort miles over the target and we hit the final ten minutes still goalless.

Could either side find a moment of inspiration or force an error? Iwobi crossed for Richarlison who couldn’t get up high enough to force a meaningful header and a through ball from Doucoure for DCL saw him beat the goalie but run the ball out of play.

Gomes picking up a loose ball found Digne for a high cross where DCL climbed to beat Targett to the header only for Martinez make a fine save and deny the Blues leading scorer. Mings with a nasty challenge on DCL saw VAR review for a possible red car and needless to say, no such decision was taken. McGinn was booked for a professional foul on Gomes, Villa clearing the free kick from Digne and three added minutes being announced.

DCL couldn’t direct his header from a Gomes cross on target and Mings did well to get back and clear a cross from Richarlison aimed towards DCL after a poor clearing header from Elmohamady was picked off by the Brazilian. Mings in the act of clearing collided with Martinez, both needing treatment before the throw-in came to Allan who couldn’t keep his shot down. And that was that, disappointment for Carlo Ancelotti and Everton in their quest for Europe.