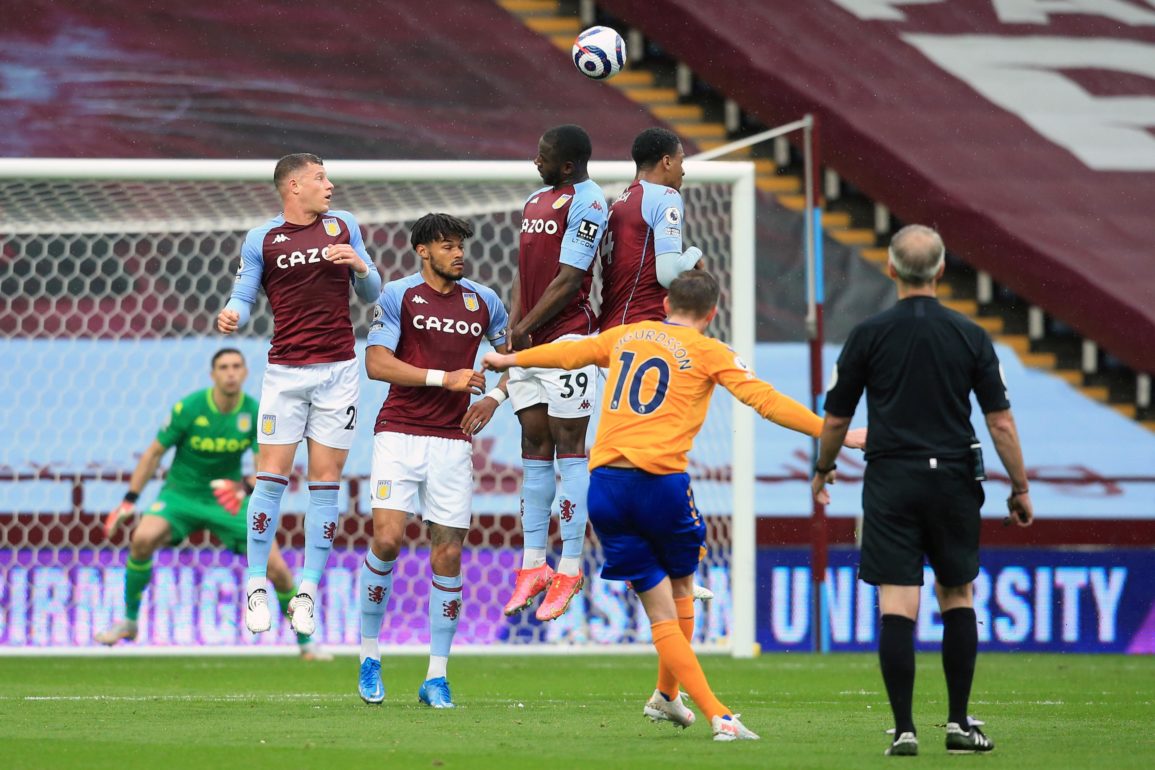 A goalless affair at Villa Park sent Everton back above Arsenal into 8th, now level with Tottenham in 7th, one point behind Liverpool in 6th (United are winning 1-0 as I write this) and two behind West Ham, all teams having played 35 games. Although the point technically keeps Everton alive in the race for Europe, it was a big chance for the Toffees to pick up a vital three points, but alas, it was a chance they did not take. That’s been a familiar theme this season. Villa had the better of the first half, slightly, but Everton were clearly the better side in the second half, and fashioned quite a few opportunities. It wasn’t to be though, and so the run-in becomes even more difficult for Ancelotti’s men, who will likely require a result at the Etihad on Championship Sunday to finish anywhere higher than 7th. Next up for Everton is bottom-dwellers Sheffield United at Goodison, a game which there quite simply is no excuse not to win. But before we turn our focus to that, here are my Player Ratings for Aston Villa 0-0 Everton.

It’s another clean sheet for Jordan Pickford, whose performances have certainly improved over recent months. The questions regarding a new goalkeeper seem to have subsided for now, and I don’t foresee Carlo pursuing that as a priority position in the summer market.

Mason did well enough at right back, but we didn’t see much of him, to be honest. It’s a little concerning to me that he plays better on the right than in the center, which is supposed to be his preferred position.

I thought Michael Keane did well. He’s stepping up admirably in Yerry Mina’s absence, at the moment. Two clean sheets on the bounce will do.

It’s him again. Ben Godfrey was everywhere. What a signing he has been.

I thought Lucas Digne defended well, for the most part, and I was relieved to see him continue on despite picking up a heavy knock on his knee in the first half. His delivery was solid, and he arguably should have had an assist when his deliciously floated cross found DCL’s head, but the England-international was only able to direct it straight at Emi Martinez.

I thought Seamus Coleman’s performance was disappointing, but I can’t be too upset considering he was playing out of position. His attacking ability seems to have dwindled, but I think his defending has been very sound this season. His best position is certainly on the right in a back-four, not as a wing-back or even a right-mid.

I was a bit surprised Abdoulaye Doucoure lasted the full 90 minutes in his first game back since fracturing his foot at Stamford Bridge back on March 8th. He played well, but I would have liked to see him pull the trigger when Richarlison gave him a beautiful lay-off on the top of the box. That was a frustrating moment.

Allan worked his socks off, as always, but I thought his defending was a bit frantic and foolish. He dove in way too often and was spun far too many times. McGinn had the beating of him in the midfield all game, which I don’t think would have been the case had the Brazilian shielded instead of over-committing and leaving himself exposed to be turned or simply sprinted past.

Gylfi Sigurdsson didn’t do anything particularly wrong, but he didn’t provide us with the attacking spark and creative influence we needed. James’ presence was missed today.

I thought Richarlison had another industrious performance. He had the biggest impact going forward of any Everton player, and nearly notched an assist on a few occasions. Unfortunately, Doucoure didn’t shoot, Gomes couldn’t get his shot off the floor, and Tyrone Mings, who probably shouldn’t have been on the pitch, blocked the cross to DCL. Still an encouraging performance, in my opinion.

I was a bit disappointed with DCL’s performance today. I think he easily could have scored in the 87th minute when Lucas Digne’s fantastic cross found him at the back post. We needed that to go in.

Gomes had two big chances, and he didn’t take either. He sent the first one into Row Z on his left foot instead of sliding it to Richarlison who was open in the box for a first time strike on his favored right foot. He then pearolled the second right at Ezri Konsa’s grateful boot after receiving a great pass on the top of the box from Richarlison. Disappointing again.

He did alright, I guess. Didn’t take much to be better than Coleman was at RM.