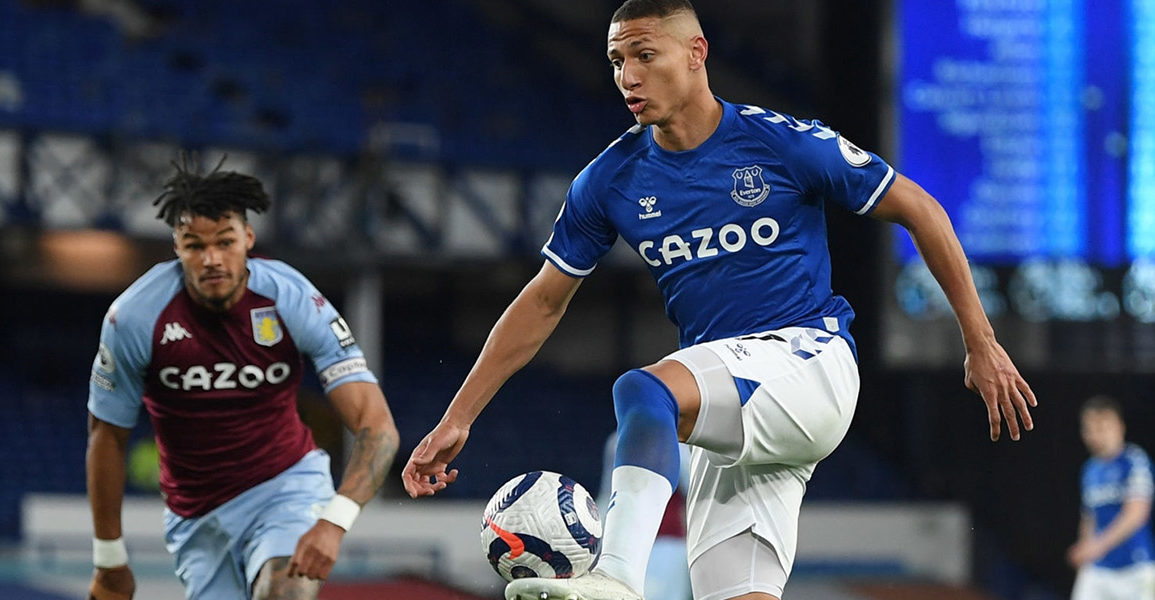 Villa take advantage as Blues rue the loss of Rodriguez.

Evertons’ miserable home form in 2021 continued as Aston Villa, with strikes from Olli Watkins and El Ghazi took the points, and in so doing threw another huge spanner in the works of the Blues hopes of European football next season.

In Friday’s pre-match press gathering, manager Carlo Ancelotti updated on the current injury situation advising that with the exception of J-P Gbamin and Abdoulaye Doucoure, everyone else was available for selection. The boss also mentioned Josh King when he politely refuted claims he doesn’t rate the Norwegian saying, “He had a small problem on his back, he was back today after two days off. His condition was quite good. He didn’t have a lot of chances [to start] which was my decision. He has been good in training and very professional.”

Having dealt with fitness issues, the boss turned his attention to the job in hand saying, “We are still in the fight and that is really good for us. We have good momentum and all the players available. The victory against Arsenal was really important… we didn’t have good results in the previous few games, so to win was important for our mentality and motivation.

He continued adding, “When we want to play more attacking football [at home] we need balance, to avoid counter-attacks and opportunities for the opposition team. We need to play with more ambition, and more focus on the balance of the team. We have to be strong and focused and do our best. Every game is vital for everyone.”

For this first of six games in 23 days of May, Carlo named his starting line-up: Pickford, Coleman (c), Holgate, Godfrey, Digne, Allan, Gomes, Sigurdsson, Iwobi, Richarlison and Calvert-Lewin – after a very late change saw James Rodriguez miss the game after going down with a calf strain in the pre-game warm-up.

Villa under Dean Smith have seen their season somewhat stall in recent weeks leaving them in eleventh place coming in to this Goodison under-the-lights game. Earlier in the campaign, Villa looked like they could make a run at the European places themselves, especially when Jack Grealish was in good form. Of late though and without talisman Grealish, troubled by a shin injury since February, the midlanders have lost their way and were lucky to salvage a point last time out against relegation bound West Brom.

Speaking on Friday, Smith noted, “Jack’s scan came back positive so we’ve gradually started to load him this week, he won’t be available this week. But the loading process has started, which we’re all a little bit tentative, obviously, because of what happened last time. So there’s a softly, softly approach with him. Morgan Sanson is still out as well with a knee injury, I don’t expect that to be too long. And, obviously, Trezeguet has got the long-term injury. Matty Cash is back after suspension after his two silly yellow cards.”

An on the Villains season to date he observed, “I think there’s a bit of both (delight and frustration). Delighted with how we’ve played at times this season, the progression we’re making as a football club. But also frustration that when a few of our key players come out, we haven’t managed to sustain the results. Defensively I think we’ve been great all season, I just feel we’ve dropped off offensively and that’s something we obviously need to improve upon.”

On a pleasant if cool evening, Simon Hooper was our appointed referee.

A decent move almost straight from the kick off saw Alex Iwobi take a pass from Richarlison, step inside his first market and fire a shot that was blocked and cleared, a positive start from the Blues. A collision between Cash and Richarlison saw the Brazilian take a knock, the last thing Everton needed was to lose him having lost Rodriguez in the warm-up thankfully, Richy picked himself up and play resumed. Villa’s first attack saw Everton fail to clear and the ball finally fell to McGinn who hit a powerful, rising shot from outside the box that cleared the crossbar.

The opening twelve minutes were pretty even as the two sides weighed each other up with Everton ponderous at the back, Villa clearly boosted by Everton having lost Rodriguez and Everton clearly missing his invention… and Holgate dallying at the back once too often saw Watkins pick his pocket and out-muscle him to gain control and quickly slide a low shot past Pickford to give the visitors a 14th minute lead.

A long ball over the top from Cash found Watkins again and Pickford was quick to close him down and block the short range effort. Allan, driving forward won the Blues the games first corner and the long, inswinging corner from Digne saw Dominic Calvert-Lewin rise at the back post to head powerfully to beat Martinez and with Mings unable to keep it out, just five minutes after falling behind, the Blues were level.

The game was opening up and a Villa attack saw Pickford save again from Watkins with Traore in support and the Blues smuggled the ball to safety. Everton pressure at the other end saw Gomes spread the ball out to Digne and his first tine cross was met by the diving head of DCL and Martinez reacted well to deny him with Luiz completing the clearance.

Targett needed some treatment after a collision with Richarlison before Digne brought Traore down to give Villa a free kick 30 yards out that Barkley tried to curl around and over the wall only to clear the crossbar comfortably. Villa keeping the pressure on saw McGinn find Traore getting behind Digne with Pickford blocking his first effort, his curling second effort toward the far top corner was palmed behind by Pickford who’d regained his line quickly. Allan put the first corner behind and the second saw Everton force Villa to retreat back into their own half.

Half an hour gone and whilst level, Everton needed to tighten up in both midfield and defence as Villa were finding too many ways through and too easily. Cash from the right flank fired a great cross into the Blues six-yard area and the short range shot from Watkins was blocked by Pickford, the rebound coming out to El Ghazi and his shot cannoned off the crossbar.

At the other end Sigurdsson curled a shot high and wide before a good interchange between Gomes and Digne saw the Icelander try to place a sidefoot shot when a full-blooded blast might have been a better option, Luiz blocking and clearing the effort. Traore latched into a loose ball to then get away from Allan and feed Barkley who took the ball on before firing a low left foot shot that beat Pickford but cannoned back into play off the foot of the post.

Iwobi released Richarlison down the right flank to be brought down by Luiz who was booked for the challenge, Sigurdsson sending the free kick into the Villa area where Martinez punched clear before Richarlison arrived, Coleman on the follow-up firing wide of the target.

Another Villa raid started by Luiz who fed Barkley to then find Watkins and his shot across the face of goal was tipped away for a corner by Pickford – DCL with a clearing header leading to Traore fouling Digne. As three added minutes were announced, Mings cleared a Sigurdsson free kick and Coleman won a corner on the right that again saw Digne trot over to send in another inswinger that El Ghazi turned behind and the second attempt from Digne saw Konsa head clear. Iwobi spread the ball wide to Digne to again cross first time and Konsa getting a vital block on a shot from Sigurdsson and Mings complete the clearance before Richarlison could get a shot away.

Neither manager made any changes in personnel for the start of the second half, Blues fans were certainly hoping for a change of application from the home side and some creativity from somewhere please.

Villa forced an early corner with Watkins pressuring the defence yet again from a long ball by Targett, Everton clearing and Richarlison releasing DCL down the right flank only for the move to break down. Allan with a neat pass found Digne for a cross that was hurriedly cleared by Villa and another swift counter attack saw Godfrey block a Watkins shot.

Iwobi picked up a loose ball to drive forward and then fire a woeful effort wide of the target. Allan trying to inspire his team mates was next to take on a shot that lacked power or direction and when Villa countered, Watkins again caught offside but, the former Brentford striker was causing Everton plenty of problems. A long ball from Pickford saw the ball skid off the head of Konsa and fall to Richarlison, his shot going across the face of goal and well wide.

An hour gone and Everton employing a more effective high press were forcing Villa to go long ball to find Watkins, and it was a long ball from Godfrey that nearly opened up the visitors as Richarlison controlled to feed Sigurdsson who completely lost the plot and failed to make the most of the half chance. Martinez then denied Richarlison after he’s got on the end of another long ball. Villa counted to win a corner that Barkley played short to Watkins and his low ball into the six yard area was eventually cleared by Coleman.

Everton needed to find some creativity in the final 25 minutes to keep their European aspirations alive but, they had to defend a Villa free kick after Godfrey fouled Watkins, Sigurdsson taking a knock from Watkins in the act of clearing the ball. Digne went down after Pickford gathered a left wing cross and carried on after treatment whilst sporting a painful grimace on his face.

Everton made their first change pn 69 minutes with Andre Gomes being replaced by Fabian Delph.

The pace of the game had dropped slightly, neither side wanting to over commit and leave themselves even more open to a quick counter attack of long ball over the top in the final quarter of an hour. Allan with a good turn lost his man to find Sigurdsson and he fed Digne, the ball eventually coming back to Sigurdsson for a shot that Martinez held well.

Everton made a second change bringing Bernard on for Alex Iwobi with 14 minutes to play and in all honesty, the former Arsenal midfielder had been an ineffective replacement for the invention and creativity of the missing Rodriguez.

Allan got back well to dispossess Luiz and launch an Everton counter that ended with DCL firing wide of the target and we hit the 80-minute mark with Villa countering to retake the lead as Traore fed El Ghazi and he curled an excellent right footed shot into the top corner giving Jordan Pickford no chance.

Josh King got the cameo appearance replacing Sigurdsson for the final eight minutes and he fired a low shot wide of the Villa goal with his first involvement. Villa won a free kick as Allan brought down Ross Barkley, tht came to nothing.

Three added minutes were signalled, it was absolutely now or never time for Everton but, Aston Villa remained calm to run down the clock and take the points that certainly, their first half performance, and the quality of the El Ghazi strike deserved.