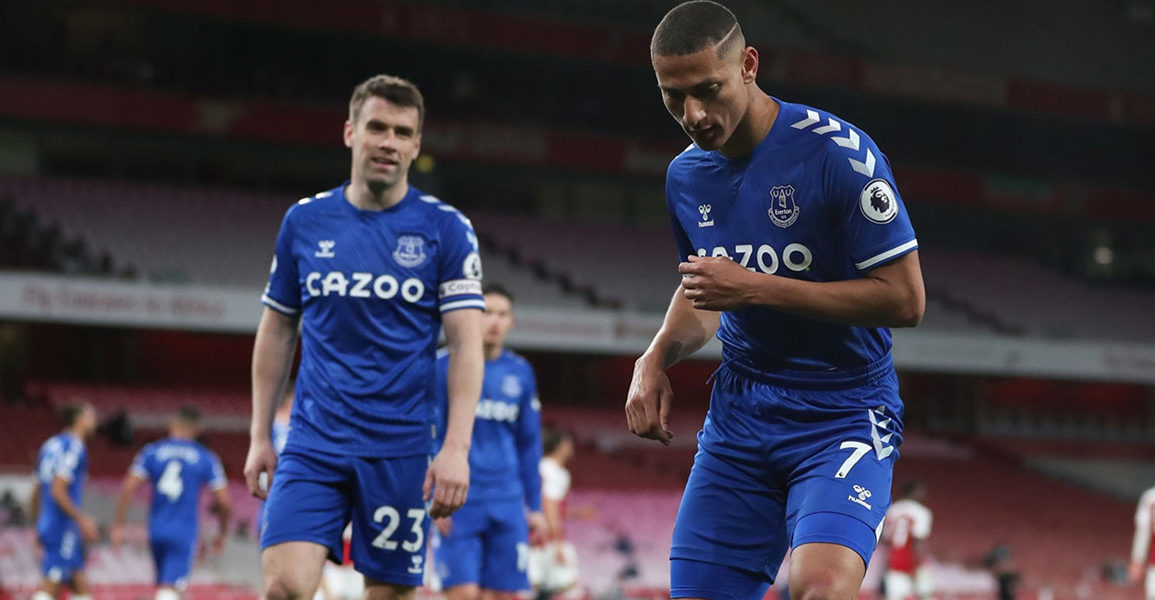 Everton finally overcame their Emirates hoodoo as a Bernd Leno own goal gifted the Blues three points from a game between the teams in 8th and 9th that showed exactly why they were in 8th and 9th as the lack of quality finishing from both sides was glaring.

Friday night footie again for our Mighty Blues and a chance to slap one of the Sleazy Six clubs in the kipper with a first ever win at the Emirates to complete a league double over the Mikel Arteta led Arsenal.

Following the Gunners hierarchy and their short-lived folly with the ill-conceived European Super League, it was back to Premier League for Arteta and his players and his preparations to face Everton were disrupted by a number of injuries to key players. Arteta’s two main goalscoring threats – Pierre-Emerick Aubameyang and Alexandre Lacazette – were both riled out of contention with sickness and injury respectively. And the Gunners were also had defenders David Luiz and Kieran Tierney unavailable for selection to face the Blues. Loanee Martin Odegaard had returned to training following an ankle injury and was expected to face a late fitness test.

Speaking on Thursday Arteta preferred to concentrate on positives when he said, “we still have a lot to play for in the leagueand playing in the semi-finals of the Europa League, so we are all excited about the way we can finish the season.”

Inevitably questioned about the chaos of the past week the Spaniard added, “I am getting used to it, since I joined it has been a rollercoaster and more things have happened in those 18 months than probably in the last 20 years. Dealing with it, trying to maintain the unity and commitment of everybody, trying to be clear and transparent with the news that we have, and trying to move on. It’s been a really challenging week for everybody in world football but we have to move forward. There are a lot of lessons we can take from it and we have to learn and probably reflect and put football in a better position.”

In a somewhat diametrically opposite situation, Everton manager Carlo Ancelotti was delighted to advise his Thursday media gathering of players returning from injury to present him with a different selection than in recent weeks. “We have a lot of players available – almost all the squad, apart from Doucoure and Gbamin who are out. The others are in good condition. Dominic (Calvert-Lewin), Yerry (Mina), Andre (Gomes), Fabian Delph and Bernard are in contention for the game at Emirates Stadium. We are ready to fight for this final part of the season. The squad is now much, much better and I have a lot of options, so I am pleased and confident.”

He continued adding, “Arsenal is a really important game, not decisive but really important. It is a really competitive final period of the season. I think we are ready. It is true we didn’t have a good moment in the past month but now, we have a lot of players available.”

The boss was clearly in confident mood when he stressed, “The squad is much better and I have a lot of options. I think we could have done better [across the season] but, honestly, at the beginning, if they said to me, you will be in the fight seven games from the end, I would have signed. We have to be satisfied where we are – but keep fighting for these seven games. For the future of this club, it [playing in Europe] could be really important. It could be a fantastic step forward in only one year.”

The inordinately rotund Jonathon Moss was the referee.

Good early pressing from the Blues straight from the kick-off saw some uncertainty at the back by the home side but, they recovered to see Chambers get forward, wide and cross for Nketiah with Everton getting the ball away eventually for Arsenal to win the first corner that was defended well.

Sigurdsson and Digne exchanged passes for Lucas to swing a cross to DCL, Holding climbing to head clear as fireworks from the protesting Arsenal fans outside the stadium provided a noisy background to the early exchanges on the pitch.

Both sides were probing at each other without creating too much until just past the ten-minute mark, Sigurdsson and Digne combined again with a super cross from Digne seeing DCL get to it but under pressure from Holding, he was unable to direct his header on target. And on the quarter hour, the same Icelandic and French connection saw another cross from Digne that took a deflection off Chambers causing Leno a moment of concern as he re-adjusted to claim the ball safely.

Partey hit a shot against Andre Gomes and Arsenal kept the ball to eventually find Saka for a shot that Pickford held cleanly with Nketiah looking for a rebound opportunity. Rodriguez with a neat ball through to Sigurdsson wide left but he failed to beat the first man with his attempted cross and the home side worked the ball clear. Everton were pressing aggressively looking to hurry the makeshift Arsenal defence into an error or two.

Another good interchange involving Rodriguez, Sigurdsson and Digne broke down when Digne delayed on a chance to cross and Chambers was able to shepherd the ball out for a goal kick. At the other end a cross saw Chambers head the ball for Nketiah to control, turn and shoot, the shot partially blocked and was easily gathered by Pickford. Twenty-five minutes gone and a reasonable enough effort from both sides but, the respective attacks firing blanks.

Best chance of the first half so far came three minutes later as a ball from Allan found Richarlison and he held off Mari to fire in a low shot that Leno gathered safely. With police helicopters hovering around the Emirates keeping tabs on the revolting Arsenal fans outside the stadium, the atmosphere must have felt strange for the players below.

Everton won a corner when a shot from Gomes was deflected wide after a good run by Coleman saw him too delay a cross and find the Portuguese for the shot, and from the disappointing corner Arsenal mounted a counter attack that duly ran out of steam and ideas. The Blues won a free kick 25 yards out and Partey was booked for bringing down Richarlison as he looked to get forward into a shooting position on a through ball from Sigurdsson, the Icelander firing in a shot that hit the top of the Arsenal crossbar.

Rodriguez was next to hit the grass after a challenge from Partey, referee Moss resisting waving a second yellow card while awarding the free kick that saw Digne shoot and disappointingly hit the wall and the Gunners cleared. The final five minutes of the half saw the huffing and puffing continue but no cutting edge from either side and just one added minute was signalled leading Xhaka winning a goal kick holding off Richarlison to bring up the half time whistle.

Neither manager made changes for the second half and after Arsenal wasted an early corner, Everton broke forward with Coleman crossing for Sigurdsson and Holding again doing enough to concede a corner and the ball go out for a second off Xhaka, and that too was wasted as Arsenal were awarded a free kick for a push in the area.

A long cross saw a half clearance header from Coleman fall to Ceballos and under pressure from Richarlison he went down and referee Moss pointed to the spot – Pepe taking responsibility for the penalty before VAR intervened to rule it offside for what, in all honesty, was a ridiculous millimetre incursion of an Arsenal elbow. And from the restart, Everton got forward only for the attack to flounder as a cross from Richarlison hit Ceballos and when Arsenal countered at speed, Allan was booked for a foul on Partey.

A miskick at the back by Holgate saw the ball hit the side netting and go out for an Arsenal corner and Everton cleared with Allan blocking a shot from Chambers. And reaching the hour mark, it was the home side who were beginning to look the more likely, winning two more corners in quick succession that Everton dealt with satisfactorily.

Mason Holgate was booked for a challenge on Pepe to give the home side a free kick to the left of the penalty area, and after Pepe had received some treatment Xhaka fired a cross that saw Chambers shoot and his effort bounce high over the bar. Meanwhile, there was activity on the Everton as Carlo Ancelotti considered a first change that resulted in Andre Gomes leaving the pitch on 65 minutes to be replaced by Fabian Delph.

A pass from Rodriguez was picked off and it resulted in Pickford turning a powerful shot from Ceballos round the post for a corner that again came to nothing. And Fabian Delph – wearing the wrong colour socks to the rest of the team – saw yellow for his first involvement, an ill-timed challenge on Smith-Rowe.

Into the final twenty minutes and it was still Arsenal showing more intent, Pickford anticipating and holding on to a cross from Saka and prompting questions about how much Everton really wanted to win this game?

Arteta lined up a double change on 74 minutes bringing off Pepe for Odegaard, and Nketiah for Martinelli – clear attacking intent from the Spaniard for the final quarter hour.

Incredibly, Everton took the lead two minutes later as a long ball from Allan found Richarlison and he span away from Xhaka to gain the byline and his low ball hit and went through the legs of Leno into the net for a bizarre own goal for such an experienced ‘keeper.

Allan tried the long ball again to pick out Coleman, Xhaka doing a better job in preventing him from getting away, and Arteta brought on former Chelsea forward Willian to replace Chambers for the final eight minutes.

Everton seemed content to defend and play out time – always a risky tactic with our luck – bringing all ten outfield players back behind the ball and Tom Davies came on for James Rodriguez on 86 minutes to further bolster the defensive midfield. Yerry Mina then came on for a 90-second cameo replacing Richarlison as Carlo confirmed his shut up shop policy for the four added minutes.

Jordan Pickford earned his corn with an added-on time save to deny Martinelli at the expense of a corner and it was all hands to pumps for the Blues as Arsenal strained for a late, late equaliser. And the points were ours !!!!