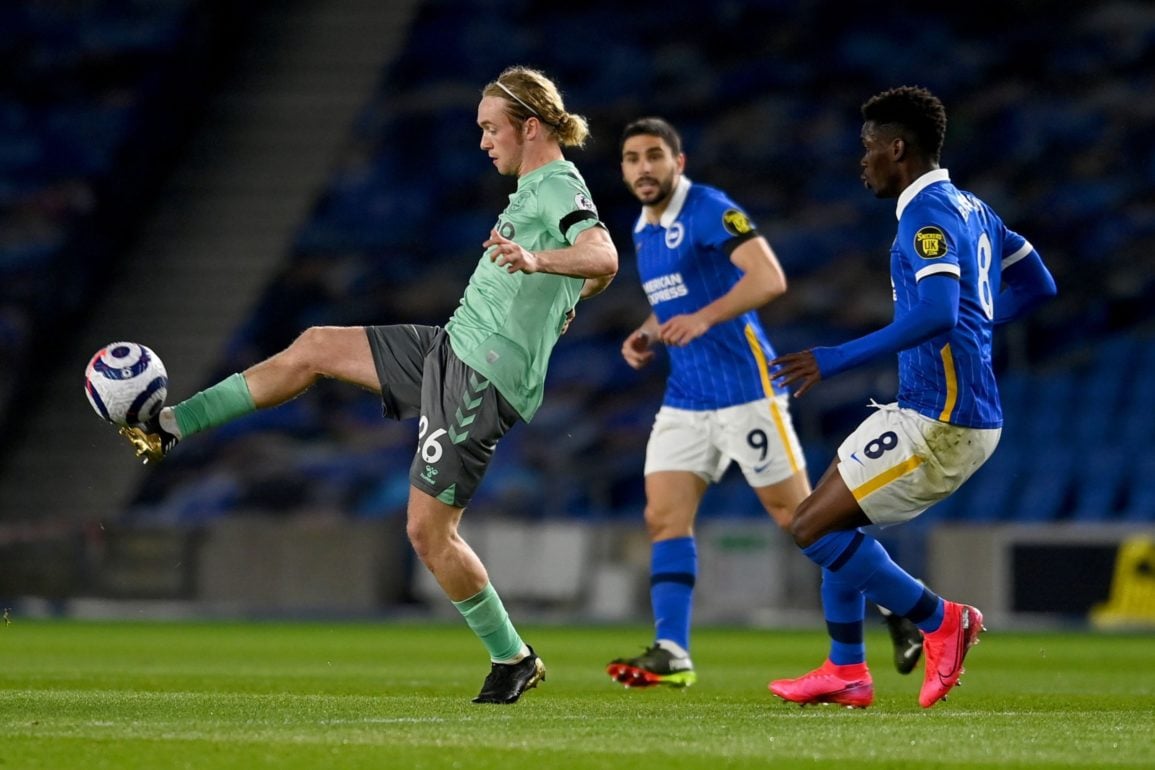 A weakened Everton earned a point from an overly passive display against Brighton, registering just one attempt on target whilst defending stoutly but, failing to enhance their European aspirations.

Crunch time has arrived in the quest for European football next season with West Ham having beaten Leicester, Everton made the long trip south to the Amex Stadium for a Monday evening date with Brighton and Hove Albion knowing only a win keep them in the hunt.

The home side lay 16th in the Premier League table still needing at least six more points from their final eight games to ensure top flight footie again next season. Manager Graham Potter had injury and fitness concerns over a number of players ahead of this clash, most notably being unable to call upon highly rated defender Tariq Lamptey and midfielder Solly March, although defenders Dan Burn and Adam Webster had returned to training and were in contention for selection. Up front, Potter was hoping South African Percy Tau would be fit as he would like be unable to call upon Aaron Connolly to play alongside Danny Welbeck.

In his match programme notes, Potter remarked, “Tonight we face an Everton team who have had an excellent season to date; the fact that they remain very much in the hunt for a European place is an indication of the excellent job Carlo Ancelotti has done this season. He is a man many of us have the utmost respect for, and given his achievements both as a player and manager, we know we will have to be at our best this evening against a team that really impressed me when we met at Goodison Park.”

For Everton and Carlo Ancelotti, after last Monday’s disappointing draw with Crystal Palace, a return to winning ways away from Goodison Park was an absolute must if European football next season is to be realised, no more mistakes and disappointing performances can be countenanced.

Speaking on Friday, the boss updated the media on his injury and fitness concerns advising, “For sure, Andre Gomes, who started to train individually today [Friday], will not be able to play on Monday. He will be able to play in the next game against Tottenham. We are checking on Allan. He trained normally this morning. We have to wait and see how it goes and if he will be available. Alex Iwobi will be available. Jordan Pickford started training this week. He is not 100 per cent and we don’t want to take a risk on him in this game.”

Asked about James Rodriguez who left the Palace game early, Ancelotti added, “James has completely recovered. I think his physical condition is good. There is no doubt about this. He is a player who, by playing, it improves his condition. I think we have to take care for him to recover well after games. It is difficult to say if he is 100 per cent but he has been good every day in training. He is pushing. He is working well and he is motivated.”

Without being critical of DCL and Richarlison, Ancelotti was clearly hoping they’d both return to earlier scoring form when he commented, “In that situation, against Crystal Palace, they were not clinical. This is the truth. After that, what can I say to them? Nothing, because I am really satisfied with their seasons. If the team is able to give them the same chances they had against Crystal Palace, they are going to score.”

On a cool, clear evening, Darren England was our appointed referee for this must win game for the down-to-the-bare-bones Blues perspective.

Everton in their pale green away kit kicked off with Mason Holgate looking to play in midfield alongside Tom Davies and Gylfi Sigurdsson and allowing Rodriguez to be more supportive of Richarlison up front. Lallana with an early shot deflected for a corner off Michael Keane and the England defender headed the first cross from Gross behind for a second corner that Olsen managed to get a decent punch on to clear despite taking a knock from Mina in the process.

The corners apart, it was a quiet start to the game, Brighton slightly the brighter and more attack minded in the early exchanges with the Blues cautious before Sigurdsson found Digne in space and his first cross of the night was headed clear, Everton recovering possession and spreading it wide to Digne again, his cross coming out to Godfrey to shoot well wide of the target.

Just before the quarter hour mark Moder upended Coleman to give the Blues a free kick five yards outside the Brighton area on the right hand side, which Rodriguez took and fired high and wide. Trossard and Lallana worked the ball forward for Welbeck who mishit his shot and Olsen punched clear, and the next Brighton effort saw Moder hit a volley that went wide without troubling Robin Olsen in the Blues net. At the other end, a back pass from Dunk saw Sanchez take a heavy touch and nearly present Richarlison with a chance, the goalie recovering in time to clear.

A nice pass from Rodriguez for Sigurdsson to lay off to Digne saw the Blues win their first corner, Sigurdsson failing to find a team mate from the inswinger and Brighton cleared following a free kick against Davies for a foul on Trossard.

A decent break from Everton saw an injection of pace as Richarlison released Coleman down the right flank to cross for Tom Davies, a shame his header skewed off his head and went to safety – the most adventurous attack so far from the Blues. Brighton responded with Trossard feeding Maupay and his shot going out for a corner off Mina, that Keane headed clear and Bissouma wildly blasted into the empty seats. A partial clearance from Keane fell to Bissouma to try an audacious overhead kick that went just too high with Olsen scrambling to get back.

To say this first half was no classic would be understating the obvious, Everton seemingly not wanting to over commit to attack and Brighton whilst more energetic unable to break down a packed Blues defence. Everton with obvious squad problems but needing to win, they had to somehow find some attacking intent at some point.

Lallana tried to pierce the Blues back line to find Maupay but, Olsen was quick to spot the through ball and gathered easily. A long ball from Holgate found Coleman getting forward but with nobody in support, the move broke down far too easily. Digne went long to find Richarlison in space but, Brighton got back to deny him finding Rodriguez and again defence came out on top.

One added minute was announced and went by aimlessly and the teams retired to their dressing rooms, hopefully for Carlo Ancelotti to implore his side to be more adventurous in the second half.

Unsurprisingly, there were no personnel changes for the second half… a second half in which Everton surely couldn’t be any more passive than they were in the first, they needed pace and intent if they were to get the points needed to maintain European hopes.

Brighton won the first corner of the second half as a Maupay shot was deflected behind after he’d been found by Welbeck. Dunk saw the first yellow card for a challenge on Richarlison as he collected a ball from Holgate and looked to break clear. Bissoua clattered Rodriguez and was lucky not to see a yellow card, and Godfrey got back quickly to draw a foul from Welbeck as Brighton tried to get forward quickly.

Yerry Mina took a tumble and was left holding his left thigh and Everton were forced into a change as the Columbian hobbled off and Alex Iwobi came on in the 58th minute meaning an adjustment at the back to accommodate Iwobi in midfield.

Rodriguez was dropping deeper and deeper to seek out possession to try and launch the team forward, and on the hour, Brighton tried to find Welbeck for a shot but, Godfrey gain was quick to get back and concede another corner that was easily defended. Sigurdsson with a piercing ball for Digne saw Brighton concede a corner that the Icelander swung in from the left, Dunk with a powerful header clearing the danger for the home side.

Rodriguez took a heavy challenge from Veltman with no free kick given and he was responded by biting back at Veltman at the expense of a free kick. Everton were still failing to seize any initiative and a long cross from Lallana aimed for Welbeck saw Holgate head behind for a corner that saw the set piece played to the edge of the area for Moder to shoot just too high.

Approaching the seventy minute mark and Everton were still record an effort on target, a sad indictment of the lack of attacking intent from a team allegedly with dreams of qualifying for Europe whereas Brighton were at least trying to get forward with purpose, winning another corner via a deflection behind off Seamus Coleman. The ball again finding its way to Moder to lash an ugly effort into the empty seats.

Excellent work from Coleman getting forward saw him find Rodriguez getting inside the Brighton area to win a corner off Sanchez, Dunk again with the clearing header. Bissouma played Welbeck into space and Godfrey again got back to block his shot, Brighton recycled the ball to find Maupay and he snatched at a shot, sending it wide when he really should have hit the target at least.

Into the final quarter hour and Trossard worked the ball for a shot that was again deflected behind for a corner that led to Olsen tipping a Dunk header over and behind for another that saw play stopped for a free kick to the Blues. Brighton were looking the more likely to break the deadlock, Everton looked like they’d long settled for a goalless draw. Holgate to Iwobi to Rodriguez and he found Digne to cross leading to a blocked volley from Sigurdsson and Davies then firing just too high from twenty yards – attacking intent at long, long last.

Keane was booked for a tackle that looked like he’d won the ball, but it was from a giveaway of his own making, the free kick just outside the Everton area saw the shot from Trossard deflect behind off the wall, and Everton scramble the resulting corner away.

Nathan Broadhead made his Premier League debut with a three-minute cameo role replacing Tom Davies ahead of Lallana firing over the Everton crossbar. As the ninety minutes expired Seamus Coleman fed Alex Iwobi and he stepped inside to fire a rising shot that just cleared the Brighton bar. Into two minutes added-on time and a foul by Holgate saw him booked and Gross waste the free kick before the final whistle.

A drab game which never got going finally ended with the point shared.