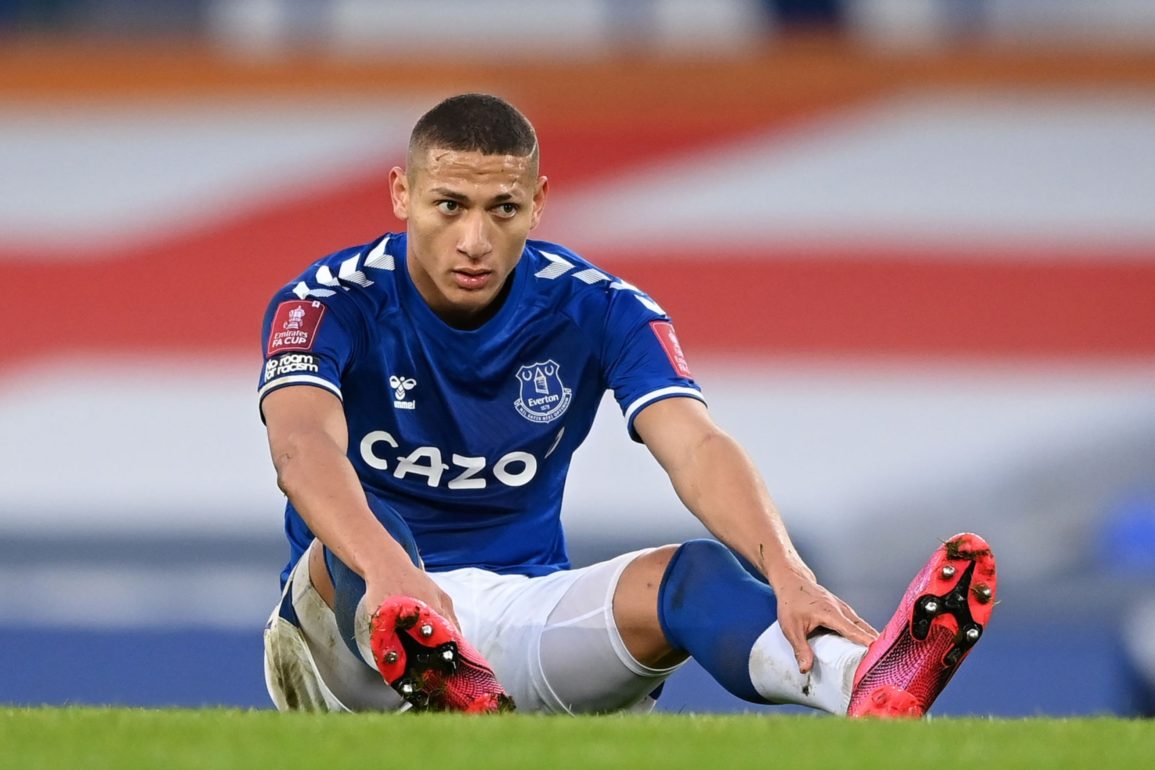 Under strength Everton go out but are not disgraced

Late goals from Ilkay Gundogan and Kevin de Bruyne broke Evertonian resistance and hearts after an injury ravaged Blues had battled so well and for so long against their much-fancied opponents. Defeat it may have been but, this loss bore nothing of the ignominy or shame of earlier home reversals.

FA Cup quarter final action for the Blues saw in-form Manchester City arguably the biggest and toughest hurdle to be overcome if Everton were to reach a Wembley semi-final date for the first time since Roberto “El Bobby Brown Shoes” Martinez was at the helm.

As if the indifferent home form of his side wasn’t a big enough concern for Carlo Ancelotto, the loss of England number one Jordan Pickford to the rib injury exasperated in the loss to Burnley was compounded in Friday’s pre-match press gathering when the manager advised, “The two goalkeepers are out, Robin Olsen and Jordan Pickford. Jean-Philippe Gbamin is out but we have good news about him. He will start training with the team next week. James (Rodriguez) is out but he will start to train with the team next week, also. Doucoure and Delph will be unavailable.”

Having confirmed that Portuguese Joao Virginia would continue in goal for what will only be his third game for Everton, Ancelotti commented, “Joao is young, a goalkeeper without experience, but he has a lot of quality.” And turning his attention to the game ahead he added, “I don’t think it’s an easy game for City. They have better quality than us, but I’m sure they will have a difficult game. It’s a knockout, a really important game. We have a big desire to go forward in this competition. I have confidence as usual, above all in this type of game. We are focused, we are concentrated.”

With practically all the media and football pundits, many fans and definitely the bookmakers making City the overwhelming favourites to stay on course for an unprecedented four trophy haul with a victory over a down-to-the-bare-bones Everton, Ancelotti selected his starting eleven thus: Virginia, Coleman (c), Holgate, Mina, Godfrey, Digne, Allan, Gomes, Sigurdsson, Richarlison and Calvert-Lewin.

Opponents Manchester City are chasing an unprecedented clean sweep of trophies – 14 points clear in the Premier League, facing floundering Tottenham in the Carabao Cup Final and having drawn German opposition in Borussia Dortmund in the last 16 of the Champions League but, facing an Everton desperate to win the FA Cup for themselves.

They might have been in devastating form since the turn of the year, but manager Pep Guardiola was taking nothing for granted when he commented, “It is a final tomorrow, away, the quality of their players is there, no doubt about it. But, it is another incredible opportunity in a competition. It is the last game before the international break. Hopefully we can finish well and when we come back the important part of the season starts.”

Guardiola admires Toffees manager Ancelotti, who replaced him as Bayern Munich boss in 2016. “He has been manager of the best clubs in Europe – Milan, Juventus, Napoli, PSG, Madrid. All places he had success. I know people talk about him as a manager and a person. He took care of me when I started. I visited him when he was at Milan. He allowed me to see one or two training sessions as well. We spoke a little bit about football and life. Always off the pitch he is so gentle. I admire him a lot.”

With a vast array of stellar talent to choose from, Guardiola entrusted the continuation of his quadruple aims to a starting line-up of: Steffen, Walker, Laporte, Dias, Zinchenko, Silva, Fernandinho (c), Gundogan, Sterling, Foden and Jesus.

Our referee at a damp and uncomfortably cool Goodison was Michael Oliver.

Allan with a rash challenge on Fernandinho conceded a free kick that saw a long range shot from Foden deflected over for a corner off Mina, DCL getting the set piece clear. City keeping the early pressure on with Foden seeing anther shot blocked. Gomes with a timely clearance as Sterling tried to feed Zinchenko for a shot, City having settled quickly into the game and moving the ball around confidently.

Dias floored Richarlison trying to get to a long throw in from Digne, the free kick swung in Digne for Steffen to nervously get clear as referee Oliver penalised Mina for his challenge on the American keeper. Gomes to DCL and onto Richarlison to feed Digne for a cross that Walker blocked and cleverly won the ball in the corner to clear. City knocking the ball around before a cross from Sterling was confidently held by Virginia.

A quarter of an hour played, City massively dominating the possession and Foden won a second City corner off Digne that Holgate easily cleared. Everton were sitting deep, seemingly content to let City have the ball and hit them on the break the assumed gameplan.

Sterling played a one-two with Gundogan to fire a shot that Virginia saw all the way and held easily. Everton responded with Allan swinging in a cross for Godfrey and Richarlison seeing a speculative overhead shot just clear the crossbar. Richarlison was caught by a flailing arm of Fernandinho, earning a short break while he received some treatment and the first booking went to Allan for a rash challenge on Gundogan.

A sudden increase in pace by Everton saw Walker play an errant pass and leading to a cross from Gomes that momentarily worried the City defence. Gomes broke up another City move to release DCL and he was fouled by Dias 30 yards out. Digne floated the ball towards Mina at the back post and Fernandinho conceded the first Everton corner and promptly headed the Digne inswinger to safety.

Fernandinho drew a free kick from a challenge by Richarlison, and Sterling sent the set piece miles over the bar. The game was nicely poised and warming up with Everton competing better as the half wore on and affording Joao Virginia good protection and beginning to put one or two moves of their own together. Good work by Allan and Gomes saw Sigurdsson thread a ball through for DCL that Laporte hurriedly put behind for a second Everton corner, Gundogan happy to clear long downfield.

City still on the front foot were finding Everton tough to break down and they wasted a corner won by Foden off Mina. Everton were mixing things up, playing short passes when able to and not adversed to going long when closed down by the visitors. Allan to Gomes and onto Richarlison who stepped in off the left to cross just too strongly for DCL to have any chance of getting on the end of.

Good play by Sigurdsson and Richarlison saw another right wing corner won and the flicked-on header from Mina saw Zinchenko head off the line at the back post. One added minute was signalled and City won a late corner as a shot from Foden was again deflected behind off Ben Godfrey, and the teams retired to their dressing rooms level.

Everton out early for the second half, with neither manager having made any changes, and looking to maintain a record of never having lost a semi-final when 0-0 at half time. City won an early corner that the Blues worked clear until Gomes impeded Sterling to give City a free kick wide left that came to nothing. A stray header from Coleman was Sterling volley miles over the bar again.

The second half had begun in similar fashion to that of the first with City looking to dominate possession but, they overworked a decent move with Fernandinho spurning the chance to shoot to find Sterling for a cross that Virginia dealt with easily. Mina was having an old-fashioned battle with Jesus, plenty of physical contact between the two which the big Colombian looked to be enjoying. Everton looked to be quicker into the tackle since the break and it resulted in some errant passes from City, encouraging signs for the Blues.

Fernandinho was rightly booked for a clear foul on Richarlison, Sigurdsson sending the free kick for Mina to nod down for Richarlison to volley wide of the target. Virginia with an excellent fingertip save to deny Sterling on the end of a cross from Fernandinho and the resulting corner kick was completely wasted by City.

An hour gone and Everton, contrary to most pre-game predictions, were giving City something of a game and plenty to think about resulting in Pep Guardiola being the first to make a change on 63 minutes, Riyahd Mahrez replacing Bernardo Silva.

Walker and Mahrez worked an opening for Foden to shoot but, his effort sliced wide of the target and the stalemate continued. Digne in a foot race with Walker forced the City defender into conceding a corner, the set piece coming out to Gomes who hit a fierce volley that disappointingly was also off target and no trouble for Steffen in the visitors goal. A lovely piece of close control by DCL saw him then feed Richarlison, his resulting cross hit the arm of Dias but, half hearted appeals for a penalty were waved away.

Passing the seventy minute mark and Everton were still looking solid and resolute in their defending and trying to stretch City when they got the chance to go forward. Gomes was belatedly booked for a foul on Foden after DCL put Dias under pressure to win a throw-in that Digne launched into the City area only to be easily cleared.

Everton were working hard and it was City who were beginning to get a bit frustrated as Sterling clearly tried to ‘buy’ a free kick and should have been booked for a dive. City made their second change on 79 minutes, De Bruyne replacing Sterling who had largely been very ineffective.

Laporte with a decent run gained the Everton penalty area but the Blues didn’t panic and worked the ball clear through DCL and Coleman. Ten minutes from extra time and a possible penalty shoot-out and Everton’s dogged gameplan was working well as Foden again saw a shot saved confidently by Virginia.

City though broke the deadlock on 84 minutes as Gundogan dived to head home into an empty net after Virginia had tipped a De Bruyne shot onto the crossbar and the City forward reacted quickly to score.

Alex Iwobi replaced Mason Holgate on 86 minutes, the Blues needing to throw the kitchen sink at City and a free kick from Sigurdsson found the head of DCL but his header wasn’t powerful enough to overly trouble Steffen.

De Bruyne crashed home a second in the final minute, as the Blues appealed for a high boot from Jesus on Yerry Mina, to rub salt into the Everton wounds. City through to the FA Cup semi-finals but, nothing for Everton to recriminate themselves for against a side of the quality of City and the odds against them on the day.