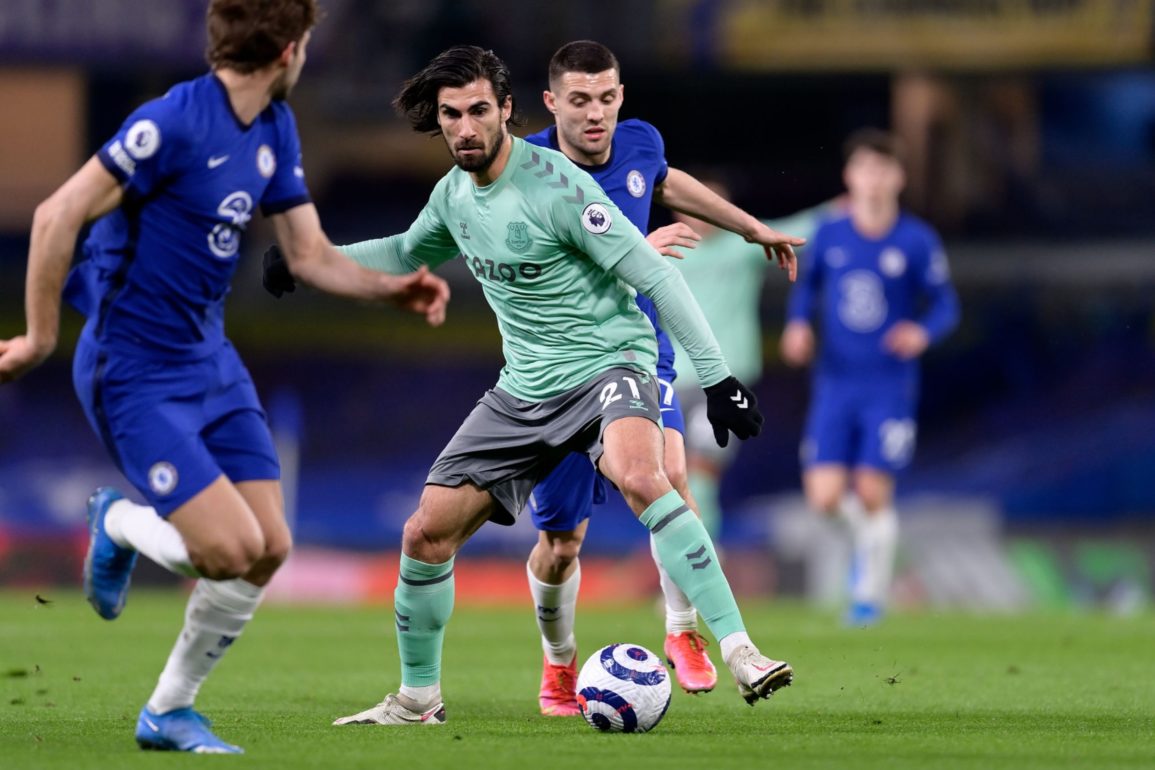 Three straight wins, two away and one at home and three clean sheets saw Everton, in fifth place, arrive at Stamford Bridge to take on Chelsea lying in fourth just one point ahead. And with new Chelsea manager Thomas Tuchel yet to lose and Carlo Ancelotti keen to reverse the result of last seasons fixture, the scene was set for an enthralling encounter in this tea-time game.

Tuchel has settled well into the Chelsea hot seat, after replacing the sacked Frank Lampard, where any poor performance or loss leads to immediate scrutiny from owner Roman Abramovich. And since arriving from PSG, Tuchel has addressed the defensive frailties that hampered Lampard, conceding just two goals in ten games and he’s beginning to get much more from fellow German Timo Werner who struggled in the early part of the season following his near £48 million transfer from RB Leipzig where he notched 78 goals in 127 appearances.

Tuchel acknowledged this game wouldn’t be easy when he said, “They have a very strong squad, very physical and full of talent. They have got strong strikers and a dangerous number ten with James (Rodriguez), strong experienced players and a super, strong manager on the sidelines.”

The German manager had almost a full squad to select from, the only doubts being over the availability of veteran defender Thiago Silva still recovering from a thigh strain that’s accounted for him having missed the previous seven games, and striker Tammy Abrahams who has a minor knock that saw him miss the victory at Anfield last time out.

Everton boss Carlo Ancelotti added to the growing feeling of love towards him this week when he declared “Everton is my team,” a phrase that immediately saw Blues fans adopting this as their Twitter header picture. Expanding what the Don had said, “First of all, I am really happy to be the manager of this team and these players, this is my team. Everton is my team. I feel these players follow me. They have a lot of respect for my idea. Of course, we would like to play better – I am not the only one who would like to play better, also the players want to play better.”

And looking forward to his second return to Stamford Bridge he noted, “The win against Liverpool gave us more confidence and belief. We have a lot of confidence because, away from home, I think we have done a run that is unexpected for everyone. I think the key was we were more focused defensively away. Our results away were helped by a really good defence. And when you put this strength along with the quality we have in counter-attack and on set-pieces [then we can achieve good results].

With a number of injury concerns affecting his team selection process, not restricted to long-term absentees Fabian Delph, J-P Gbamin and Yerry Mina and including skipper Seamus Coleman and midfielders Tom Davies and James Rodriguez, and the weekend rumour mill regarding an injury to Abdoulaye Doucoure appeared to get confirmation when The Don announced am unchanged back four in a starting eleven of: Pickford, Holgate, Keane, Godfrey, Digne, Allan, Gomes, Sigurdsson (c), Iwobi, Richarlison and Calvert-Lewin.

David Coote was the referee entrusted with keeping order.

Chelsea on the front foot from the kick off with Everton closing them down and not giving them room to play until Werner won a fifth minute corner and then skied a shot miles high and wide after the ball found its way to him on the edge of the area.

Everton looked composed and content in allowing Chelsea lots of the early possession, with the early indication seeming like Carlo Ancelotti was happy for his side to soak up the pressure and play on the counter attack. James got away from Allan and went on a charge only to see his shot ricochet off Godfrey for a second corner that saw Jorginho shoot wide through a forest of legs.

Holgate was booked on 16 minutes for a foul on Werner looking to get onto a ball from Kovacic, the free kick swung in by Alonso and the punch from Pickford saw Jorginho fail to keep his shot down and it sailed harmlessly over the bar. The home side were dominating the possession and even after twenty minutes it appeared clear that Everton would need to be clinical when they did get the chance to get forward.

Sigurdsson to Richarlison and back to Digne for the cross that DCL couldn’t get a decent header on, but an encouraging move from the Blues in the pale green kit. And at the midway point in the half, Carlo Ancelotti looked calm on the touchline while his opposite number was showing Teutonic tendencies similar to others we’ve encountered recently, yelling and gesticulating at his players.

Richarlison was fouled just outside the Chelsea area, Jorginho catching his left foot and giving Everton a great opportunity for a shot which Digne took to hit the wall and cannon behind for a corner from the right. Digne with the inswinger that Chelsea struggled to clear at first before working away for a throw-in.

Chelsea took a somewhat fortuitous lead just past the half hour as Hudson-Odoi found Alonso and his cross found Havertz and his shot – that was going wide – cruelly deflected off Godfrey to give Pickford no chance.

Having fallen behind, Everton needed to stay calm and keep Chelsea at bay while they gathered their thoughts and adjusted to having to be more offensive to get back into the game. A nice takeaway by Allan found Sigurdsson to immediately release Richarlison but Christensen won the ball back before the Brazilian could get into his stride. Hudson-Odoi cutting in off the left flank saw his shot blocked by Keane and the next Chelsea attack saw an excellent fingertip save by Pickford deny Alonso slightly deflected by Michael Keane at the expense of a corner.

Iwobi did well to get away from the Chelsea midfield to find Digne wide left for a cross that Mendy punched clear and he had to recover his line quickly to gather a low shot from Gomes, the last meaningful moment of the first half.

Neither manager made personnel changes during the interval so it was up to the starting eleven to try and get back into the game before Carlo Ancelotti was made to think about tactical changes. Chelsea won a free kick and Lucas Digne was yellow carded for a foul on James that saw Alonso take on the shot towards the top corner, Pickford making sure it went behind for a corner that was cleared comfortably.

Chelsea had the ball in the Everton net, on 54 minutes, through Havertz latching onto a ball from Hudson-Odoi to turn and shoot, but VAR checked and ruled the effort out, and Everton breathed a sigh of relief. Everton made their first chance just over a minute later, Tom Davies replacing Alex Iwobi and moments later Sigurdsson found Richarlison and he snatched at the shot, the ball skewing off his right foot and going well wide, best chance so far one he will be annoyed at not having made the most of.

Hudson-Odoi again cut in off the left flank to fire a shot that Pickford took no chances with by tipping it over for a corner that was defended well enough. An hour gone and Everton needed to be doing more offensively and a decent break from Holgate sent Richarlison away on the right only for his cross to be far too strong for DCL to try and reach.

Chelsea were awarded a penalty in the 64 the minute as a through ball for Havertz saw Pickfrod race off his line and miss time his challenge and bring the German down. Jorginho netted the spot kick, the hop, ski and a jump sending Pickford the wrong way.

Hudson-Odoi made way for Mason Mount before the restart with Everton now needing to throw caution to the wind if they were going to get anything from the game in the remaining 25 minutes. Kurt Zouma went down off the ball appearing to hyper-extend his right knee and Everton used the stoppage in play to replace Gylfi Sigurdsson with Josh King before Zouma was ready to continue.

Good play by Godfrey released Richarlison first touch let him down and James got back hammer the ball behind for a corner that came to nothing. King, found by Davies, won a corner off Zouma and the inswinger from Digne saw a free kick given for an infringement on Mendy… and Bernard was the third change replacing Andre Gomes with a quarter of an hour to play.

Allan and Davies snuffed out a break by Mount and the game looked like opening up as Everton tried to find ways to get forward and trouble Chelsea but, leaving gaps for the home side to exploit. Kante came on for Kovacic with just over ten minutes to play and from the restart a long ball from Azpilicueta found Werner who got away from Godfrey, Pickford with a good stop low to his left to concede a corner that saw Werner head straight at Pickford.

Godfrey defended well to deny Werner as Kante found the German in the penalty area as Chelsea kept the ball in the Everton half of the field. A nice turn from Richarlison saw him spread the ball wide right for Holgate who overhit his cross as DCL and King headed into the Chelsea area. A tremendous double save by Pickford saw him deny Werner after Tom Davies had lost the ball and the England keeper recovered quickly to deflect a Kante shot away for a corner.

Into the final five minutes and Everton needed something of a miracle but, it was still Chelsea looking the more likely to extend their lead. A nice move involving Richarlison, Digne and Davies ended with Bernard lashing a poor shot miles high and wide. Tom Davies saw yellow for a wild kick that caught Alonso and we went into four added minutes.

Kante put a late header from a cross from Alonso wide of the target and in the dying seconds, Pickford made another decent save to deny Mount from distance.