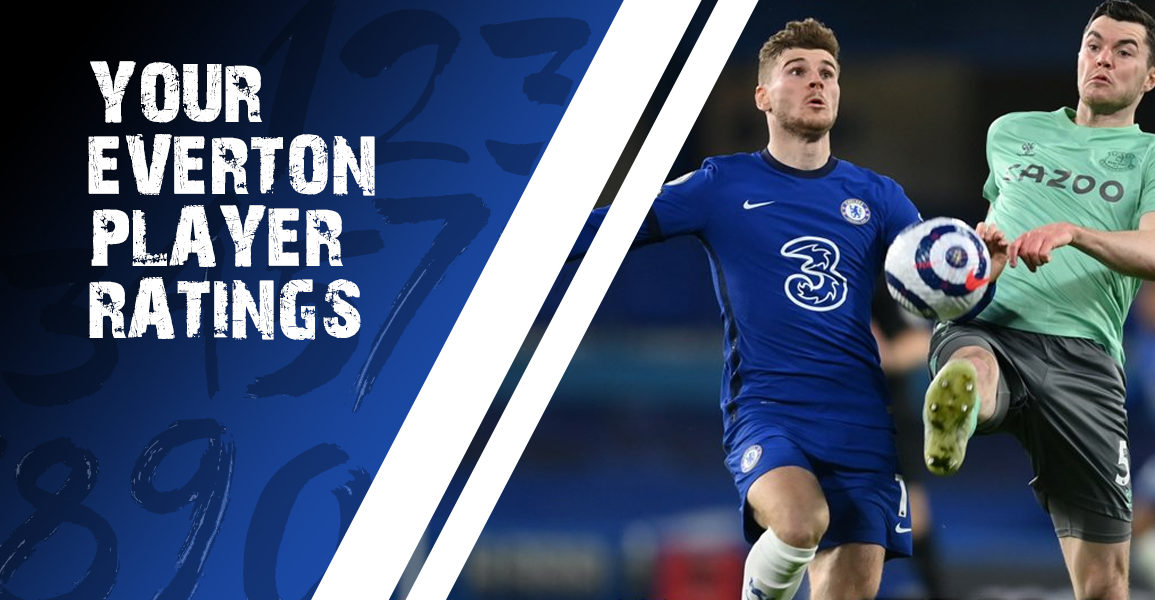 Everton’s hope of a top four finish were dealt a blow in a 2-0 defeat at Stamford Bridge.

Ben Godfrey put the ball in his own net to give Chelsea 1-0 lead on 31 minutes, before Jorginho scored from the penalty spot on 65 minutes.

The defeat saw the end of Everton’s three-game winning run and saw Chelsea open up a four-point lead over fifth-placed Everton, though Everton do have a game in hand.

Everton’s remarkable away unbeaten record finally came to an end at the hands of Chelsea, who were simply too much for the Toffees to handle at the bridge. Unsurprisingly, Ancelotti’s side was happy to sit deep and soak up pressure in the early stages and were quite effective in doing so until Kai Havertz’s shot deflected off of a hopeless Ben Godfrey and nestled itself in Pickford’s net, who was already diving in the opposite direction. Chelsea made it two in the second half when a fantastic through ball from Kovacic put Havertz in again, and after making the decision to try and cut off the German, Pickford was just unable to get a touch on the ball and subsequently conceded a penalty, which Jorginho cooly slotted away. It was a well-deserved victory for Chelsea, and just one of those games for Everton, as they came up against a better and deeper side with fresher legs and a fantastic record under their new manager. It’s a big dent in the Toffees’ Top 4 hopes, but a home match against Burnley on Saturday is a great opportunity for the Blues to bounce back against a struggling side. Without further ado, here are my player ratings for Chelsea 2-0 Everton.

Yes, I’m well aware that Jordan Pickford gave away a penalty which effectively sealed the game, but he was put in an awkward position with a fast attacker running through, and he decided to come out and try to cut him off. He was half a step late. It was a mistake, yes, but a minor one in my eyes and the fact remains that he made 8 saves in this game, none of which were particularly easy, and Chelsea likely would have won by 4 or 5 if it weren’t for his fantastic performance for the other 93 minutes and 55 seconds of the match. Pickford was Everton’s best player, and I don’t think there’s much of an argument for anything else.

I’ve been repeating myself all season it seems, but I’m not a fan of Holgate at right back. He’s too susceptible to being beaten 1 on 1 in wide areas and he offers next to nothing going forward. He was caught ball watching for Chelsea’s first goal. It was a poor night for Holgate overall.

Not much to say about Michael Keane. I thought he defended well mostly but obviously was caught out a few times at the end of the match when we were pushing men forward. Luckily Pickford was on hand to spare the backline’s blushes, well, all but once.

I don’t think it’s harsh to say this was very possibly Ben Godfrey’s worst game for Everton thus far. He used his pace and strength to good effect as always, but he showed some defensive naivety in his positioning and shepherding. The own goal was not his fault whatsoever, but he was desperately lucky not to be the cause of the third when he was far too easily turned by Timo Werner, but a combination of Pickford’s leg and Werner’s poor finishing let him off the hook. He was also breezed past by Havertz’s run which would end up winning the penalty.

Not a good night for Lucas Digne. His delivery was disappointing when it did come in, and half the time he seemed almost hesitant to deliver in the first place; not something we’re accustomed to seeing from the Frenchman. His mix-up with Gylfi Sigurdsson on the left-hand side during the second half was a pretty fitting representation of the match overall from Everton’s point of view.

I thought Allan did his job adequately, but there was a very obvious Doucoure-sized hole in the midfield next to him. Allan is an aggressive presser in the midfield and often relies on Abdoulaye’s legs to cover, but Gomes and Sigurdsson quite obviously can’t offer that safety blanket. Allan seemed to tire quickly, but that’s understandable given his extended period on the treatment table.

If I could give Gomes a 5.75, I would, as I don’t think he was as poor as Godfrey, but he wasn’t anywhere near his sparkling best either. His passing was sufficient, but he was dispossessed four times; at least only one of them was in our own half, an improvement over his game at the Hawthorns in which he was seemingly addicted to giving it away in dangerous positions.

The Icelander was likely Everton’s best player on the ball, and he had a substantial amount of success holding up the ball and finding little pockets of space in between Chelsea’s midfielder and their back three. He couldn’t quite create any real chances, but he was tidy and precise most of the time. Not one of our bigger problems today.

It was yet another disappointing performance from Alex Iwobi, who Carlo Ancelotti hooked off before the hour mark for the second consecutive match. His delivery, simply put, is horrific, and not good enough for an attacking player of any kind. He can’t seem to be effective at one thing or another at the moment, whether that be crossing early into the box, or driving past defenders towards the byline. He’s not had any impact on the games he’s played in recently, and that certainly didn’t change tonight.

Richarlison was Everton’s most dangerous player tonight, but he couldn’t quite get the final decision right. He had a few opportunities on the counter where good tackles halted his progress, and he of course had Everton’s best chance to equalize in the second half, but he was off balance and sliced his shot badly wide from a promising position. With that said, he was really the only player threatening at all and was the center of most of Everton’s few attacking forays.

I can’t really fault DCL for his lack of involvement today. He had quite literally zero service. Calvert-Lewin is not a striker who can readily create his own chances, and today he received no help. It’s disappointing to see him enter a dry spell again, but when you compare the service he was receiving early in the season compared to now, it’s pretty easy to see why he hasn’t been on the scoresheet as of late (West Brom sitter aside).

I thought Everton looked a lot better after Tom Davies’ introduction, at least going forward, but I think you have to attribute the defensive openness to the fact that we were chasing the game by that point. The diamond in midfield was effective, and Davies had some joy on the ball in Chelsea’s third, helping Everton keep some of their only sustained pressure in the game.

We didn’t see much of Josh King with the ball, but he had a few tidy turns and used his body well to shrug off defenders and win a few corners down the right-hand side.

It was too-little-too-late by the time of Bernard’s introduction, but he provided the most entertaining moment of the match from an Evertonian perspective when he turned Jorginho into a human traffic cone on the counter-attack.