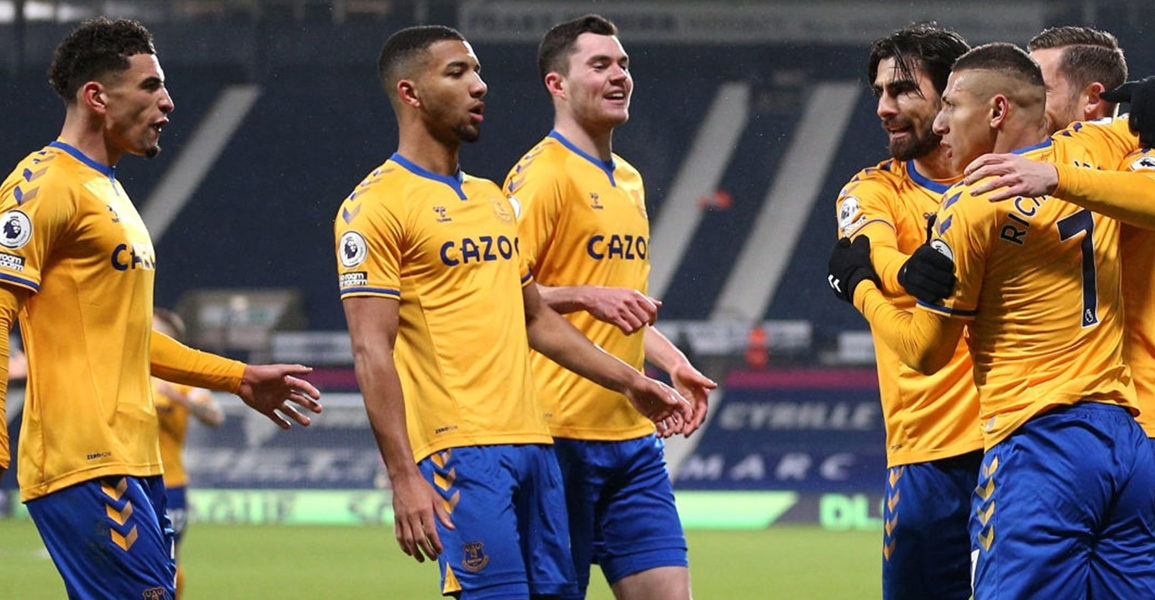 In-form Brazilian Richarlison netted for the fourth game on the trot as Everton overcame a stubborn West Brom, heading home from close range a Gylfi Sigurdsson cross seconds after the Icelander had come on, to lift the Blues into fourth place, even if only for a couple of hours.

Thursday early evening footie saw a clash of styles and football philosophy as Carlo Ancelotti took his Everton side to the Hawthorns to take on relegation haunted West Brom managed by Sam Allardyce.

The Baggies have been odds-on to be relegated since the very start of the season, when under then manager Slaven Bilic, the club chose not to go crazy in the transfer market, choosing to rely predominantly on the players who’d served them well in getting promoted from the Championship along with Leeds and Fulham.

They provided our first home opposition of the season but after their bare-faced cheek in opening the scoring, they lost Kieran Gibbs and Bilic to red cards and were soundly thrashed as the Blues on the back of a hat-trick for DCL cruised to a 5-2 victory.

Bilic lasted as manager until late December when with Albion lying 19th in the table, he was removed and eventually replaced by former West Ham, Sunderland and Everton boss Sam Allardyce, the club hoping that he could continue his record of never managing a club that got relegated.

Three months in and their situation is no less precarious as with only three league wins to their name, the least of any Premier League side and the worst goal difference in the Premier League, only Sheffield United are below them.

Allardyce commented on the challenge facing his side saying, “We have to keep getting better and better. We’ve got to get better defensively because we gave away two penalties last weekend. I’m not 100% sure if they were penalties, but we shouldn’t have put ourselves in that position for the referee to make a decision. We have to improve passing accuracy, our flow, our movement and when we get to the final third, we need to improve our delivery and end product. We’re happy to have won the last game against Brighton, but we still need to improve. Clean sheets are the backbone of us trying to scrape our way out of the position we are in.”

In desperate need of points in their fight to avoid the drop, he selected his starting line-up: Johnstone, Furlong, O’Shea, Bartley (c), Townsend, Yokuslu, Pereira, Gallagher, Maitland-Niles, Phillips and Diagne.

Everton under Carlo Ancelotti arrived at the Hawthorns in good heart following a second successive clean sheet win having disposed of Southampton on a lovely strike from Richarlison on Monday evening. And with the Blues already having recorded eight victories away from Goodison, the form book at least suggested that a ninth was very much on the cards.

Looking at the challenge and the rewards another victory could bring, Carlo Ancelotti noted, “We have a great opportunity to be in the top four and we would like to touch that position. We have to put all our effort into the game on Thursday to try to be there, it is a real possibility. It doesn’t matter how long we can be there but, just to see how we feel if we are there.”

The desire the managers expresses is clear to hear and he added, “There will be a big fight until the end of the season and we have to be pleased we can fight for that position. But it doesn’t change our target, which is to be in Europe next season. To fight for the European places, we need to improve the home form. It was not good and this performance and victory [over Southampton] can help us have a better run at home. It will be a dream to be in the top four, we are quite close… but the season is long.”

At the highest altitude ground in the UK, our referee was Darren England.

Everton looked resplendent in the amber and blue away strip against the candy-striped Albion side and Johnstone was quick off his line to clear upfield where Albion saw a cross from Gallagher find the head of Diagne and his looping header was pawed to safety by in-the-pink Jordan Pickford. The offside flag brought a nice move from the Blues to an end as Richarlison went too soon to get on the end of a through ball from Bernard after Gomes had found Digne to find the diminutive Brazilian. Godfrey with a good header cleared a cross from Phillips as the Baggies started brightly in the opening ten minutes.

Richarlison caught offside again getting on the end of another pass from Bernard halted another Blues attack and Phillips latching onto a loose ball shot from distance, an effort well gathered by Pickford. Lucas Digne was looking to get forward on the left with both Bernard and Gomes trying to be the supplier but it was Albion with another half chance as Townsend picked off a pass to burst forward and cross for Diagne who couldn’t direct his header on target.

West Brom were looking nothing like a relegation haunted side, competing well in midfield and looking to spread the ball wide to create crossing opportunities, a lofted ball from Townsend seeing Pickford spill the catch but gather at the second attempt. At the other end a cross from Digne was played to Richarlison by DCL, the shot partially blocked and falling nicely for Johnstone to gather easily.

Twenty five minutes gone and Everton whilst enjoying possession were not creating anything of any note, far too many backwards and sideways passes, and precious little in the way of invention.

A charge forward by Ben Godfrey saw him run fifty yards unchallenged and his shot was deflected behind for the first corner that was completely wasted by a poor delivery and Holgate holding a defender to concede a free kick. Digne hurt himself tackling Furlong and walked away rather gingerly rubbing his left knee. Another decent passing move by Albion saw Furlong win a corner off Digne, Keane first and then Bernard with an overhead kick clearing the set piece.

Holgate was booked for a poor challenge on Diagne ahead of the best effort of the half from Everton as Bernard found Doucoure and onto DCL who laid it off to Richarlison whose shot from a tight angle was deflected over for a corner that came to nothing.

A good run by Bernard saw the ball break nicely into the path of DCL and he went for power over placement and Johnstone stood firm to make the save on the best chance of the first half. As half time loomed, Everton were looking slightly better and a cross from Digne found Richarlison whose low shot was blocked and cleared. Just one added minute was signalled and West Brom snuffed out another Everton move to send the teams to their half time slice of orange and cup of tea level at null.

No changes at the start of the second half was something of a surprise for many watching at home and wanting to see Everton be more aggressive and incisive from the outset. Furlong fed Pereira who moved to his left before taking a shot that Pickford saw all the way and held comfortably. A long throw then from Furlong was flicked on by Bartley for Diagne who couldn’t react quickly enough to direct his header anywhere than over the crossbar.

Furlong again got forward to find Gallagher in the area and some tricky footwork from the Chelsea loanee led to his shot going across the face of goal where Phillips at the back post couldn’t reach it – a lucky escape for Everton if truth be told.

Gomes from distance saw Johnstone go low to his right to make the save as Carlo Ancelotti mused over a first change with Allan warming up on the sideline. Alex Iwobi made way for Allan on 58 minutes, to anchor the midfield and allow Gomes to push further forward. O’Shea was booked for a blatant push on Richarlison as the Brazilian skipped away from him. The free kick from the left swung in by Digne and came out to Allan whose cross was easily claimed by Johnstone.

Pereira conceded a corner as Holgate tried to find Digne and Carlo made a second change, Gylfi Sigurdsson replacing Abdoulaye Doucoure on 64 minutes. And the Icelanders first involvement was, after the corner had come back out to him, to play a peach of a cross to find the head of Richarlison who climbed to head home from five yards.

Furlong was booked for a rash challenge on Digne right on the edge of the penalty area on the left, the Frenchman needing treatment before the free kick was taken and punched clear by Johnstone in the Albion goal. A sweeping move by the Blues saw good control by DCL and a great cross aimed towards Gomes, Maitland-Niles getting back to deny the Everton midfielder.

Maitland Niles then got forward to win a corner off Digne, the ball coming out to Gallagher whose shot was blocked and a second cross from Pereira easily claimed by Pickford. Bernard to Richarlison and a nice ball inside the defender towards DCL saw the ball hacked away for a throw-in by O’Shea. Into the final quarter of an hour and Everton were looking for a second, Digne getting from on the left to cross inside for DCL whose first time effort would have made a decent conversion attempt in either code of rugby.

Holgate headed a Pereira cross behind for a corner as West Brom strained for an equaliser, DCL with a good clearing header. Yokuslu was booked for barging over Bernard as Everton considered a late cameo role for Josh King, and the Norwegian replaced Bernard on 83 minutes.

The Baggies to their credit weren’t going route one, trying to work an opening rather than hoping for an Everton blunder on a long ball but, this allowed Everton to slow things down when in possession eating valuable seconds off the clock as the Blues sought a ninth away win of the campaign.

Holgate went down pointing to his left hamstring and after brief treatment was okay to carry on for the last few minutes. Holgate then stood form as West Brom tried to work the ball past him after Keane had slipped, and incredibly, five added minutes were signalled.

Incredibly West Brom had the ball into the net as Diagne was ruled offside after a lovely piece of control and a terrific finish saw the equaliser ruled out and the Blues saw time out to go fourth in the table – woo-hoo.