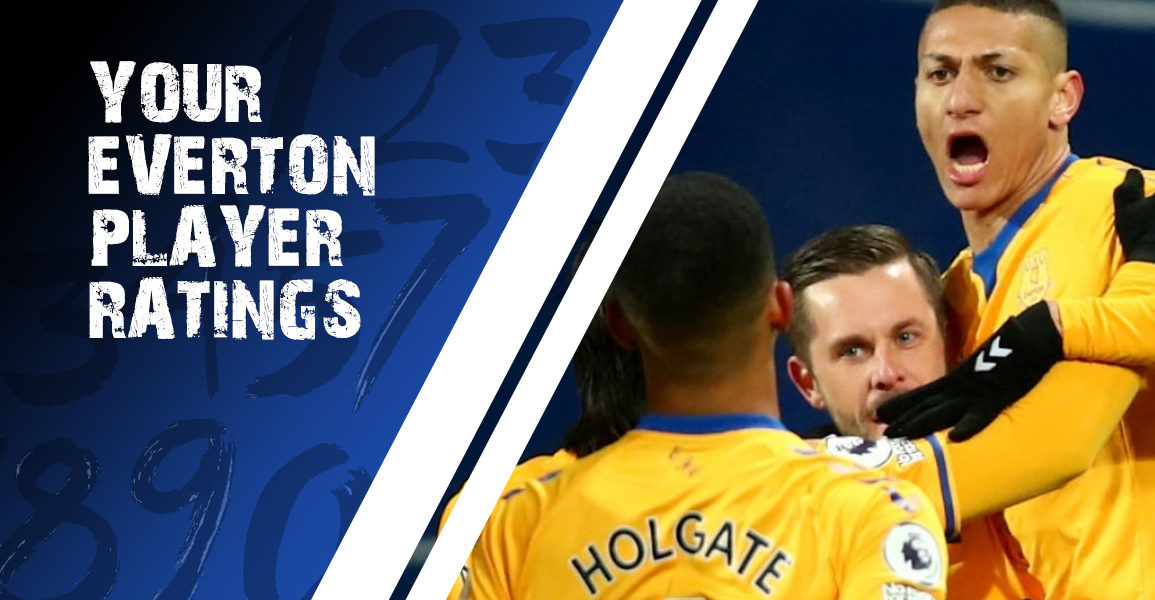 Richarlison‘s second half goal give Everton three valuable points in the pursuit of European qualification at The Hawthorns.

Gylfi Sigurdsson whipped in a superb cross and the Brazilian directed a header past the keeper in the 65th minute to send Everton temporarily into 4th place.

The Amber away kit remains unbeaten, as today Everton limped across the finish line with all three points after a very hard-fought game at the Hawthorns. Yet again, it was Richarlison who found the breakthrough and ultimately delivered another crucial victory for the Toffees. West Brom were certainly up for the game and caused Everton quite a few problems, but in the end, Ancelotti’s men were able to secure their third consecutive clean sheet after Mbaye Diagne’s dramatic equalizer was rightly chalked off, as the Senegalese was offside. It was not a convincing display from the Toffees at all, but the results are there to be seen, and Everton have now equaled their Premier League record for away wins in a season with 9. They are also now unbeaten in 9 consecutive away matches, last losing on November 1st at St. James’ Park, which is their longest unbeaten streak on the road since 1984/85 when they managed 10. That record will be under a lot of pressure when Everton travel to Stamford Bridge to face an in-form Chelsea side, but for now, it’s another three points for the Blue half of Merseyside, who now find themselves in the Top 4 for the time being.

I thought Jordan Pickford had a good game, yet again. He made a great save to deny Diagne’s looping header in the first half and seemed to control his penalty box well enough. His hands looked assured as he didn’t spill any of the multiple low crosses and shots that came his way. Perhaps he should have come out and claimed the cross that led to Diagne’s disallowed goal, but we’ll give him the benefit of the doubt and say he knew the striker was offside.

Mason Holgate scares me with the ball sometimes, especially when he nearly played a perfect through ball for Diagne in the second half, but I thought he handled his defensive duties quite admirably. He certainly needs to improve his passing and ball control, as he gives me a slight heart attack any time he’s put under pressure with the ball at his feet.

Shocker, Big Mick Kegger is very good in the air, and he showed it today. He didn’t do anything particularly wrong, but his center-back partner will take the plaudits because of his countless last-ditch tackles and blocked crosses.

Everton were one Ben Godfrey away from conceding for most of the game, and he is probably the only thing that kept us from going behind and inevitably losing the game. He had so many crucial touches, interceptions, and tackles, and was by the far the outstanding defender for the Toffees. We can thank him for our third consecutive clean sheet.

I thought Lucas Digne’s delivery was poor again today, which is quite unlike him, but he defended well. We know how good he is in the air, and that did not change today. He got into some good positions down the left-hand side, as always, but either his crosses weren’t quite right or he was fouled. He seemed to take a few blows throughout the match, so hopefully, he is fully fit for the huge game at Stamford Bridge on Monday.

I probably sound like a broken record every week when I talk about Abdoulaye Doucoure. Yes, he works really hard. Yes, he runs his socks off every game. But his passing today was quite simply awful, and he needs to be better on the ball going forward, especially if we’re only playing with 2 central midfielders.

Andre Gomes is such a frustrating player to watch. We know he has quality and ability, but today his decision-making was just horrific. He gave away the ball so many times, and at the end of the game, he continually dribbled into culdesacs or failed to get the ball out like we needed. We were very lucky to get away with the number of times we conceded possession in our own half, and Gomes was to blame for most of those instances.

Oh, dear. What a poor game from Alex Iwobi. His delivery was brutally deficient yet again. He wasn’t involved in the game at all essentially. There were a few occasions in which he had space or a one v one situation against one of West Brom’s much slower defenders, but he always made the wrong decision or put in a cross that never had a chance. For the life of me, I don’t understand why he is so allergic to driving towards the end-line, especially when his service from deep is so consistently mediocre. Carlo was right to hook him off before the hour mark.

I’m really not sure this was the right game for Bernard to be starting in. He got bullied for large portions of the match and didn’t have the time or space on the ball that he needs to be effective. He had a few nice moments, most poignantly when he played a clever disguised pass to Calvert-Lewin who set up Richarlison for one of Everton’s better chances during the game. That being said, he also was a culprit of losing possession in dangerous areas a few too many times and didn’t have much of an impact overall.

Today, Richarlison became the first Brazilian to ever score in 4 consecutive Premier League matches. The man is bang in form, and it’s great to see him consistently scoring again. It’s a bit of a shame that we haven’t had both DCL and Richarlison in goal-scoring form at the same time this season, but it’s been great to have the Brazilian to fall back on during DCL’s relative dry spell. As I said in my Southampton player ratings, the Pigeon we know and love is finally back, and maybe even better!

It’s not been fun to watch DCL’s goals dry up, especially when he’s had good enough opportunities to get on the scoresheet. He missed an absolute sitter today, as he waited too long for the ball to come across to his right foot, and by the time it did, his angle had decreased substantially and he ended up hitting it right at Johnstone. Calvert-Lewin at his best would have stroked that into the bottom corner with his left peg, but this out-of-form version spurned the chance. Although it’s great to have Richarlison in top form, we need both the Brazilian and Englishman to be finding the net in concurrently order to achieve our lofty goals.

I thought Allan did his job very admirably after coming off the bench, and I’m excited to see him playing week-in week-out once he’s fully regained his fitness. He was composed on the ball and made himself a nuisance as always, and helped us regain control of the match for the period before we resorted to soaking up West Brom’s pressure at the end of the match.

It only took Gylfi Sigurdsson 43 seconds to stamp his mark on the match, as he whipped in a great ball that Richarlison beat Sam Johnstone to and nodded home. That goal would of course be the winner, and it was the result of the quality delivery that we had lacked all game to that point and desperately needed. I don’t want to toot my own horn, but I did tweet during the match that we needed to bring on Sigurdsson, as he has been the only one capable of breaking down defences at the moment due to James’ absence. He now has 8 goal contributions in his last 8 games, which is quite encouraging considering how awful he was last season.

I personally thought Josh King should have been introduced 5-10 minutes before he was, as we had a few opportunities on the counter in which he would have been very useful before his entrance to the game, but we didn’t really have any opportunities for him to break for the 11 odd minutes he was on the pitch considering we were holding on for dear life.