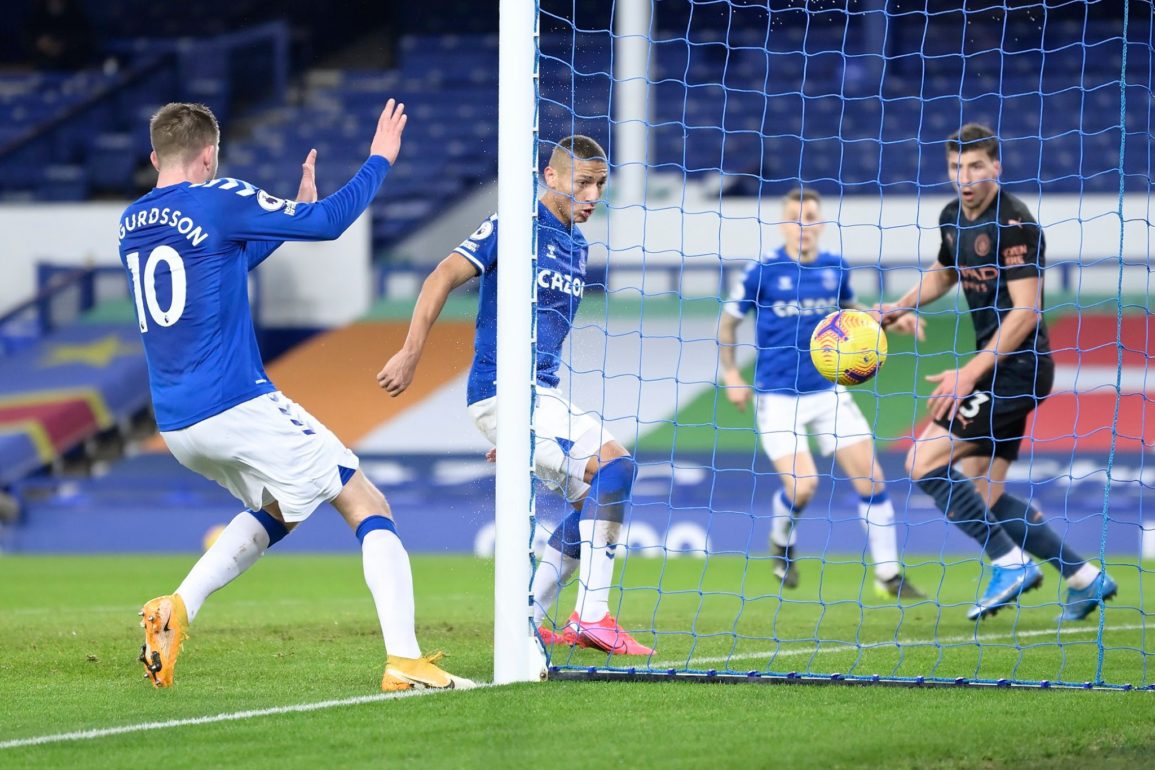 Phil Foden (32′) gave the visitors the lead before Richarlison (37′) equalised, but Riyad Mahrez (67′) put Pep Guardiola’s men back in front and Bernardo Silva’s (77′) strike put the game beyond any doubt.

You can rate each Everton player’s performance out of 10 below.

It was a valiant effort from Carlo Ancelotti’s makeshift Everton side, but in the end, it was the Champions-Elect who took home the points. Manchester City simply had too much quality for Everton and the manner of the winning goal was proof enough of that. Considering the absences of Allan and Dominic Calvert-Lewin, it’s hard to criticize the Toffees’ performance considering it wasn’t until the 77th minute that the game was truly lost. The scoring was opened by young starlet Phil Foden in the 32nd minute when a half-blocked clearance fell perfectly to him in the box and his subsequent shot ricocheted off Seamus Coleman and left Jordan Pickford helpless. However, City’s lead wouldn’t last long as kist 5 minutes later Everton strung together what was by far their best move of the game. It started with Alex Iwobi wide on the right flank who played a lovely pass into the feet of the substitute Seamus Coleman in the box. The Captain chipped the ball across the box and found the left boot of Lucas Digne on the half-volley, whose shot cannoned off the post, onto the thigh of Richarlison, and into the net. The scoreline remained 1-1 into the second half until a moment of pure ruthlessness from Riyad Mahrez restored the league leaders’ advantage. The Algerian received a lovely layoff from Bernardo Silva and lashed home a trademark effort from his left-peg off the post and in. The most disappointing part of the match for me was Carlo Ancelotti’s subsequent substitutions in the wake of Mahrez’s goal, as I think he got it wrong yet again, but we’ll discuss that later on. Eventually, City put it to bed through Bernardo Silva, who received a similar layoff to the one he provided Mahrez with, before dancing past a defender and rifling a shot into the back of the net via Jordan Pickford’s wrists. Sure, the strike had plenty of power behind it, but Pickford should do better in mine and basically everyone else’s opinion. That would be the end of the scoring, leaving Manchester City 10 points clear at the top of the Premier League and Everton in 7th, with both teams still possessing a game in hand. Without further ado, here are my player ratings for Everton 1-3 Manchester City.

Look, Pickford was solid for most of the match. He had no chance of stopping either of the first two goals he conceded. That being said, he has to do better on the third. He returned the side just to make yet another mistake in his first game back. How many times can he get away with it? He’d have already been sold if he was anyone else at any other club. Can we please just get a good #1 in the summer? I’m begging, Marcel.

Well, Mason Holgate wasn’t anywhere near as shocking as he was against Fulham, so that’s a positive I guess. Firstly, I don’t understand why he kept his place considering how awful he was at the weekend, and my fear only grew greater when Yerry Mina’s injury forced Holgate to move to center-back. He didn’t end up being too bad, but Jesus and Silva definitely had the beating of him a few times. I still think Godfrey and Keane/Mina should be the center-back pairing going forward, but we’ll see how bad the Colombian’s injury turns out to be.

Michael Keane was great in the air today, and we needed him to be considering the amount of crosses City were swinging into dangerous areas. To be fair, it’s not like the Mancunians have many aerial targets, but the quality of their balls into the box cannot be underestimated. I thought Keane did well defensively for the most part, but in possession, he was very wasteful, pumping the ball up to absolutely no one many times and ending many Everton possessions that were hard to come by in the first place.

I can’t grade Yerry. I hope his injury isn’t serious and that he will be back match-fit in no time!

I still consider Ben Godfrey to be our most consistent defender, and today didn’t change that. He’s been a class signing, and I thought he did relatively well at LB today, but in the end, Bernardo Silva and Riyad Mahrez overran him and their quality in the final third was too much for the young defender to handle. However, you can’t criticize the effort. Godfrey gives 100% every game and that’s just one of the things I love about him.

I thought Lucas Digne did relatively well playing out of position again as a sort of LW/LM. His shot which led to Richarlison’s goal was lovely, and he was the catalyst of many of Everton’s attacking forays in the first half. He was quiet in the second period, however, and his crossing was sub-par. Still, I don’t think you can ask a ton more from him playing out of position.

Everything didn’t quite come off for Doucoure today, but I did think he did well, particularly in the first half. I think he and Tom Davies are a good partnership, and Doucoure’s game visibly suffered when Carlo made the absurd decision to hook off the Scouser. Doucoure continues to be one of the first names on the team sheet and I don’t see that changing any time soon.

Tom Davies was good, again. Meanwhile, Sigurdsson did nothing, again. So, tell me why Carlo decided to take Davies off and leave Sigurdsson on? Is it because Gylfi offers some “attacking threat” and we’re chasing the game? That’s illogical. Gylfi, firstly, had done next to nothing all match, and shouldn’t even have been starting in the first place considering his performance on Sunday. Secondly, taking off Davies effectively removed any sort of structure and control that we had in the midfield and instead sacrificed it for Sigurdsson’s “creativity” which doesn’t exist in 9 matches out of 10. Just nonsensical.

The same goes here! I thought Iwobi was good today. We know that his crossing from deep leaves some to be desired, to say the least, but City are a pressing team and Iwobi is arguably our best player in tight spaces due to his close control, agility, and quickness. Our best opportunities all came through Iwobi, but when we go behind and need more of that, Carlo decides to take Iwobi off. I don’t get it.

I think I’ve made my feelings perfectly clear about Gylfi Sigurdsson. He had no right starting today after how pathetic he was on Sunday and how apathetic he looked about it. He had even less of a right to somehow play the full 90 minutes, and even less of a right to be the bloody Captain for heaven’s sake! I am truly baffled by Carlo’s apparent love affair with Gylfi Sigurdsson, and it’s now becoming a real problem. The Icelander should be sold in the summer while he’s still worth anything at all.

Today Richarlison got the bit of luck he deserved. I thought he did a MUCH better job of getting involved in the game than he did on Sunday, and he won countless fouls through solid hold-up play and some tidy turns with his back to a defender that drew contact and won some much-needed respite for the Toffees. It was nice to see him finally score again in the Premier League, and we’ll need him to kick on from here during the rest of the season.

Seamus Coleman was Everton’s best player on the pitch. He should have started from the off, in my opinion, as not only did he impress when coming on against Spurs a week ago, but Mason Holgate also had an absolute stinker on Sunday. Unfortunately, Coleman entered the fray due to Yerry Mina’s early injury, but I thought he did brilliantly well to essentially keep Raheem Sterling completely quiet throughout the match. He made some great tackles and also provided the beautiful chip ball that led to Richarlison’s goal. Well done, skipper.

King did next to nothing, to be honest. I barely even remember him touching the ball…

James didn’t have an impact on the game either, unfortunately, but I suspect he would have been much more likely to if he had Alex Iwobi making runs beyond him to pass to and not Gylfi Sigurdsson standing still and pointing.