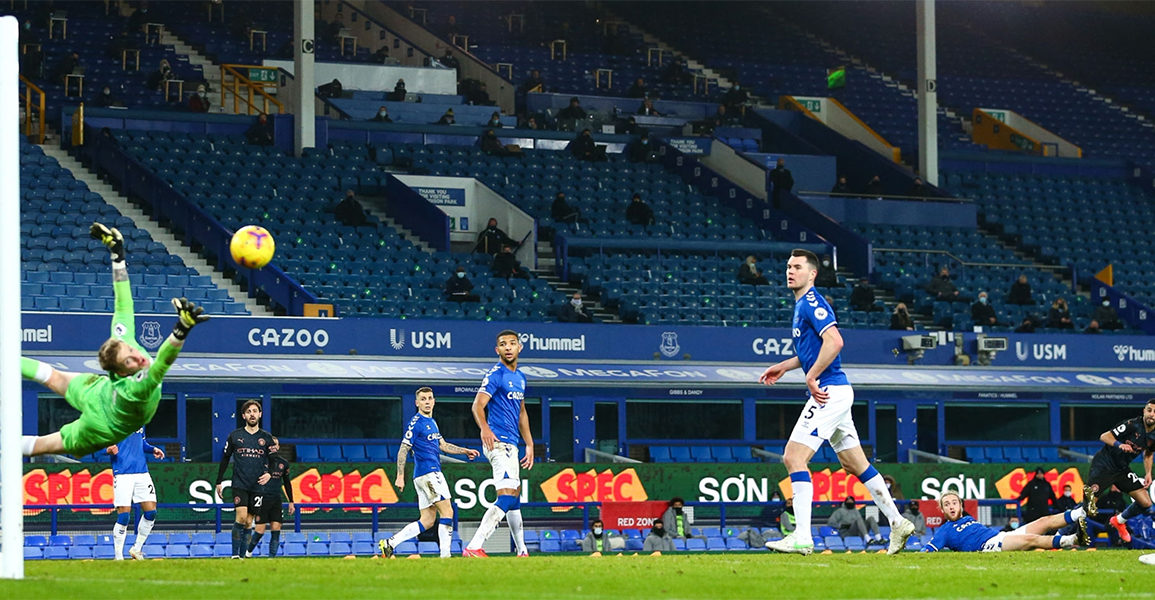 Slick City too good for Everton

Everton were improved effortwise than they were against Fulham but, were not good enough to live with a Manchester City side hellbent and seemingly destined again for a multi-trophy season.

After the embarrassing and shambolic performance in losing to Fulham on Sunday, Everton took on the opposite end of the Premier League table on Wednesday night when four-trophy chasing Manchester City tipped up at Goodison.

Blues boss Carlo Ancelotti took some flak for his team selection and tactics versus Fulham, against City there was likely to be very, very little margin of any for error. And he was upbeat in his looking forward to the game saying, “I don’t know how much chance we have to win against Manchester City – but we have a chance. Usually, in this kind of game, we did really well, so I have confidence. Yesterday [Monday] was not a good day because we were disappointed and frustrated. Today is the day of confidence and belief. I believe we can play a completely different game.”

Updating the media on player availability he advised, “Dominic Calvert-Lewin and Jean-Philippe Gbamin will not be available, for sure. For Dominic, I think it is a matter of days [before he is fit again], we hope he will be available on Saturday. The others are all okay. Pickford trained yesterday [Monday] and he was okay. We will check again today and if he is available, he is going to play. Allan is in contention. He is fit. He is good.”

Keen to avoid a third home loss on the bounce against a side looking to stretch their winning streak to an unprecedented 17 games, Ancelotti added, “We have to find a solution to try to prepare the right strategy to play against City. Most of the time, City will have the ball but we have to use our quality and play with efficiency when we have the ball.”

Premier League leaders Manchester City are in incredible form and looking for even more landmarks including a fourth win on the bounce against Everton at Goodison; become the first team to win their opening eleven games in a calendar year and stretch their current unbeaten run to 24 games. On a personal front, if selected to play, Gabriel Jesus will be looking to become the first player at any club to score in six successive Premier League matches against Everton. He has seven goals in his past five top-flight fixtures versus the Toffees.

City – like they needed it – were boosted by Kevin de Bruyne injured against Aston Villa in January returning to full training this week as manager Pep Guardiola advised, “He’s getting better, really getting better. Today he did all training with the group, with all of us. He’s much better.” On the fitness of German international Ilkay Gundogan he added, “Gundo is much better, but I don’t think is available for tomorrow.” City could be set to welcome back Fernandinho from a two-match absence due to a thigh problem and Guardiola confirmed summer signing Nathan Ake is his only other injury concern.

And on the fantastic form his team have been showing Guardiola noted, “You never get perfection. What we have done winning 16 in a row is a consequence of preparing as best as possible for the next game. Two months ago we were not in the thoughts of any person in world football about winning the Premier League. A lot of things can still happen. All that is in my head is Everton.”

And for the Goodison clash, he shuffled his considerable deck of cards and named a starting line up of: Ederson, Walker, Dias, Laporte, Cancelo, Silva, Rodri, Foden, Mahrez, Jesus and Sterling (c).

Our referee was Andre Marriner.

Jordan Pickford into the action early on his return to the side, pushing a shot from Cancelo behind for a corner that Everton cleared after Jesus saw a shot blocked; Iwobi on a ball from Richarlison held things up to give Holgate the chance to cross, City getting it clear and straight down the other end to win a second corner that Everton defended well. An Everton counter started by Doucoure saw him then get on the end of a cross from Digne, his volley blocked by Laporte and cleared.

City won a third corner when Sterling drove hard to the byline, Mina blocking his cross behind, the set piece headed clear by Godfrey. Jesus skipped away from Digne, Mina again with the corner conceding block on the attempted cross. Keane headed another Foden corner to safety as City kept the early pressure on in an entertaining opening ten minutes.

Davies robbed Silva to find Richarlison only for Rodri to get back very smartly to dispossess the Brazilian before he could get into his stride. Silva got away from Keane and went down under a second challenge, no penalty, before Mina went down with a right leg problem that saw Seamus Coleman immediately get ready to take his place with only a quarter hour played. The change was delayed as the Blues carried on with ten men and Jesus onto a through ball lofted his shot over the bar before the change was completed, Coleman to right back with Holgate replacing Mina in the back three with Keane and Godfrey.

City playing some nice one touch passing but the final ball from Foden was poor and Pickford gathered easily. Jesus played Walker in on the overlap, Godfrey back quickly to concede the umpteenth corner that again came to nothing. A long ball from Holgate found Digne but again, City in the shape of Walker closed him down quickly to win the ball back and clear.

Doucoure saw the first yellow card of the game for a foul on Jesus after a couple of minutes of Everton ball possession, City quickly back at it but for all their possession and territorial advantage, Jordan Pickford had only had the early save from Cancelo to make. Mahrez jinked into the box to cross towards Jesus at the back post, Keane heading it behind. Everton couldn’t get it successfully away and another cross from Mahrez saw the ball eventually fall to Foden to smash a deflected shot that Pickford couldn’t adjust to save.

Doucoure latched onto a loose ball to find Sigurdsson who played Iwobi into space for a cross that was overhit and sailed behind. Doucoure with another burst forward and now it was City’s turn to struggle to clear the ball as a cross from Digne was only partially cleared out to Iwobi and he found Coleman, his chipped cross was met by Digne first time and the ball came back off the far post to hit Richarlison on the thigh and into the net – who cares how it goes in?

The equaliser coming just five minutes after going behind clearly boosted Everton whose energy levels were much better than against Fulham. Laporte went down after a bump from Richarlison, the City player feigning an arm to his face, the referee not having any of it. Richarlison was booked for kicking the ball away as two added minutes were signalled and played out with Tom Davies in the thick of things right to the whistle for the interval.

No half time changes by either manager and City settled quickly again into their possession and passing game to win the first corner of the half off Davies, the Foden corner saw Pickford with a good punch get the ball away. Pickford with a good save low to his left denied Silva as he latched onto a loose clearance from Holgate before a nice Everton move involving Richarlison and Iwobi led to a Sigurdsson shot being deflected comfortably for Ederson to claim.

Sterling sprayed a ball out to Mahrez and his low cross was well gathered by Pickford, looking calm and collected this evening. Walker with a cross field ball picked out Jesus who’d got behind Michael Keane and he blasted his effort wide of the target. City were having much more of the ball, as we all expected but the Blues were working hard to keep them at bay. Approaching the hour mark, the game was still nicely poised, Coleman with a good tackle on Cancelo to launch a Blues counter that ended with a poor cross from Digne, most unlike him.

Digne back defensively conceded a corner preventing a ball from Jesus reaching Mahrez, Foden swung it in and Rodri climbed but directed his header beyond the far post. Pickford with another good punch cleared a chipped ball from Rodri aimed towards Jesus. The City pressure eventually tolled on 63 minutes as Mahrez took a short ball from Silva to hit an excellent shot beyond the dive of Pickford and in off the far post. Could Everton come back a second time?

City were piling forward and Pickford did well to prevent a cross from Cancelo reaching Jesus before Sterling was booked for bringing down Coleman. A double change for the Blues on 68 minutes saw Josh King and James Rodriguez replace Tom Davies and Alex Iwobi respectively.

Dias climbed on Richarlison to give the Blues a free kick that Rodriguez flighted but City cleared without too much trouble and we hit the 75 minute mark with Everton needed something special. Coleman did well to take the ball off Foden and look to counter but his ball for Richarlison didn’t match the quality of the tackle and when City counted themselves, they struck with deadly effect, Mahrez to Jesus and a layoff for Silva to take one step inside and crash home a shot that Jordan Pickford will probably think he could have done better with.

Kevin de Bruyne then appeared on the touchline and came on for Sterling with ten minutes to play.

Rodriguez set King away on the left to cross and the ball fell for Doucoure who couldn’t get set for the shot and that allowed Foden to nip in and take the ball away. Digne conceded another corner as City kept coming forward, Sigurdsson tidying up with the help of Pickford. Doucoure with a late run played a lazy ball forward that City dealt with easily, the difference in the quality of the passing and support play clear to see, City playing on a much higher level to that of Everton, a level the Blues need to aspire to in the coming seasons ahead.

Three added minutes were indicated and City sent on Fernandinho for a cameo role replacing Rodri. Cancelo went down after he was caught on the knee by Rodriguez and Mahrez pushed a late effort wide of the post.