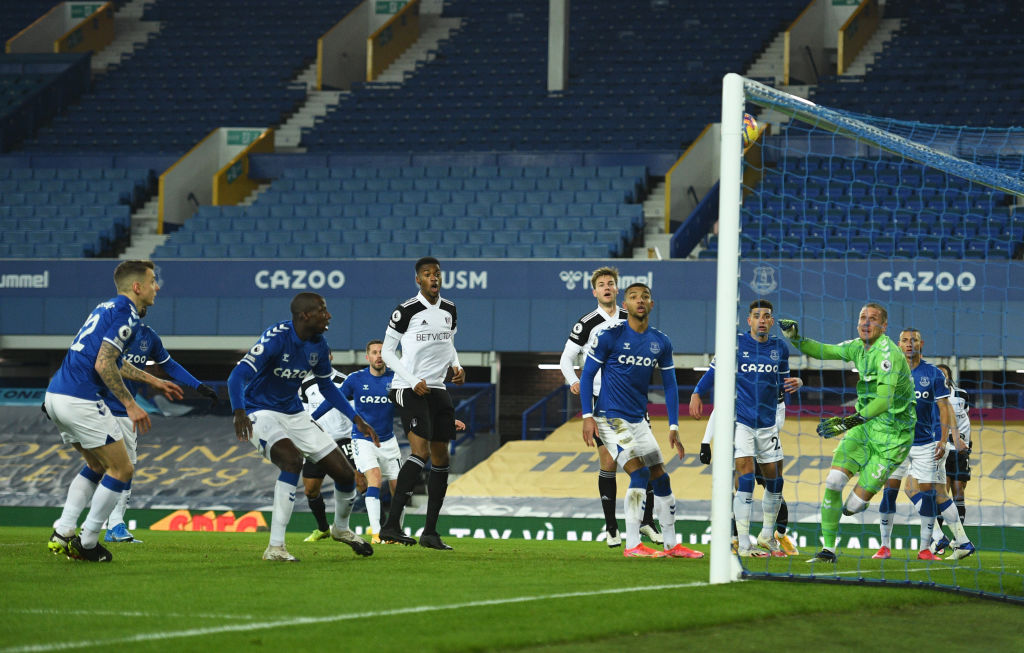 Everton’s poor form at Goodison Park continues with an embarrassing 2-0 defeat to Fulham.

Everton put in a desperately poor performance and Maja’s second half double give Fulham a deserved victory.

You can rate each Everton player’s performance out of 10 below.

I’d like to start this with a disclaimer that I am absolutely livid at the moment, and that will be reflected not only in my ratings but my comments as a whole. If you are reading this, you already know what happened on Sunday night at Goodison, so I’ll spare you my normal game description and instead move on to why this happened. None of my previous player ratings articles have included a grade for the manager, until today, because Carlo Ancelotti deserves nothing more than a 2/10. This was by far his worst game as Everton boss, as some of his decisions were absolutely horrific. Firstly, he got the Starting XI and system all wrong. I’m still confused as to what Sigurdsson’s instructions were at the beginning of the game. He was absolutely useless in whatever role he was supposed to have. Carlo changed the backline yet again, playing Holgate at CB for the first time in months, and he had an absolute shocker. Secondly, substitutions should have been made at half-time, which was very clearly shown at the beginning of the second-half which started how the first half ended, leading to Josh Maja’s first goal. Only then did Carlo make a single change in terms of personnel or system, and when he did he brought off Seamus Coleman who was the only player showing any sort of fight or even that he cared at all during the game. He also decided to take Davies off and leave on Sigurdsson and Gomes even though both of them had absolutely shrunk under pressure and had provided next to nothing for the team, Sigurdsson especially. The build-up play in the second half was just as bad, if not worse, than the first despite being behind for the vast majority of it. Everton resorted to hit-and-hope long balls which had zero chance of coming off. There was no game plan, cohesion, ball progression, breaking through the lines, or chance creation at all. It was absolutely pathetic. And on top of all this, it came against a team who had not won at Goodison Park in 27 years since before the Premier League’s existence, that had not won a league game since November (12 matches), and that had only won 2 out of 22 games in the Premier League this season. This was a complete and utter embarrassment and I fully expect the players and manager to take responsibility on social media. Every single Evertonian deserves an apology for that horror show of a performance. Had fans been in attendance, I would have demanded a refund be given for every last ticket. That’s how poor this was. Now that I’ve gotten that out of my system, let’s get on to my player ratings for Everton 0-2 Fulham.

He didn’t really have many saves to make, but the Swede proved yet again that he is a liability from defensive set-pieces by flapping at an early corner which should have been put home by the visitors but luckily wasn’t.

Everton’s captain was the ONLY player that showed any sort of drive, grit, or commitment in this game. He came close to scoring when he drove through the midfield and hit the outside of the post with his weak foot. After the first goal, he was screaming at James and Richarlison to fix their body language because the two South-Americans had dropped their shoulders and had given up just 50 minutes into the game. He did what a captain should do, and he defended well for the most part. What did Coleman get in return for this? Stuffed back onto the bench for some reason by Carlo Ancelotti. Shambles.

Oh, dear Lord, I don’t even want to get started on this. Holgate was SHOCKING. I think I’d rather have pulled Ashley Williams out of retirement and stuck him at left center-back today. Holgate was truly awful in possession, making a number of extremely sloppy passes that nearly led to goals. He decided to break away from Josh Maja to mark absolutely no one, leaving the Nigerian wide open to tap home his first Fulham goal. What a horrible performance from Holgate today.

Ben Godfrey is one of the only players who should leave Goodison today with any ounce of pride. He wasn’t awful, which is an accomplishment I suppose considering how poor those around him were.

Digne was absent. Not sure what else to say. He wasn’t involved at all going forward until the closing stages when he was hitting hopeful crosses into the box, none of which were of any quality or threat to Fulham. Poor from him.

Has Doucoure been less involved in any game for Everton? You could have easily convinced me he didn’t play today if I hadn’t already written out the names of our starting XI before writing this article. He had no impact, but I suppose he was tasked with covering 3 players’ worth of ground considering how lazy Sigurdsson and Gomes were, the former specifically.

I mean it’s not like Tom Davies was good, but he in no way deserved to be taken off instead of Sigurdsson. The fact Gylfi stayed on the pitch after an hour of nothing is mind-blowing. Davies had at least some fight in him, right? He made a few good tackles, he covered ground. He played football, which is something you can barely say about the Icelandic. I don’t get it.

Gomes was poor, yes, but at least he tried? He played a great ball to Lucas Digne over the top just like the one that led to Sigurdsson’s goal at Elland Road, but it only led to a corner this time, and his only other contribution was a great ball in which found the back of the net via an offside Josh King. Otherwise, not good enough at all.

Poor is far too kind a word to describe that performance. Far too kind. Sigurdsson was utterly useless. He provided nothing. He didn’t work hard, nor did he provide any attacking influence, nor ball progression, nor defending in general, and so on. He was horrific. The fact he played the full 90 minutes is a disgrace, in my opinion. He should have been hooked at half time.

Not sure what to say about James. He shrinks when faced with physicality. Fulham didn’t make life easy for him and he didn’t rise to meet that challenge but instead limped off after a hearty slide tackle was left on him. This was a game where he did look like a “luxury player”.

I mean, Richy had nothing to do, but can you blame him? He had only 4 first-half touches, as Everton couldn’t even get close to progressing the ball far enough forward for him to receive any sort of pass. He got no service. He didn’t even have a shot which makes sense considering no one gave him the ball, like ever. We really needed DCL today and I’m sure if he were playing, Richy could have made a much bigger impact playing off of an actual striker and not a piece of Icelandic compost.

King looked to have scored his first Everton goal, but he strayed offside. There’s not much else to say. He didn’t have the impact on the game that we needed, but it wasn’t particularly his fault, as we didn’t even sniff the ball while he was on until we started our hit-and-hope phase with 10 minutes to go.

Why did Michael Keane come on? Why? It did nothing except move Holgate from having a shocker at center back to having a shocker at right back. Sure, had you left the much more offensively capable Seamus Coleman on the pitch or had brought on Iwobi to play RWB or something, it may have made at least some sense, but how does moving Mason Holgate to right-back give us any more chance of getting back into the game? All this substitution did was take off our only leader on the pitch and hand the armband to someone who should’ve been left on the team bus. I just don’t get Ancelotti’s thought process.

No super-sub triumph for Bernard this time. He didn’t do anything wrong, per se, but he provided little attacking spark off the bench.