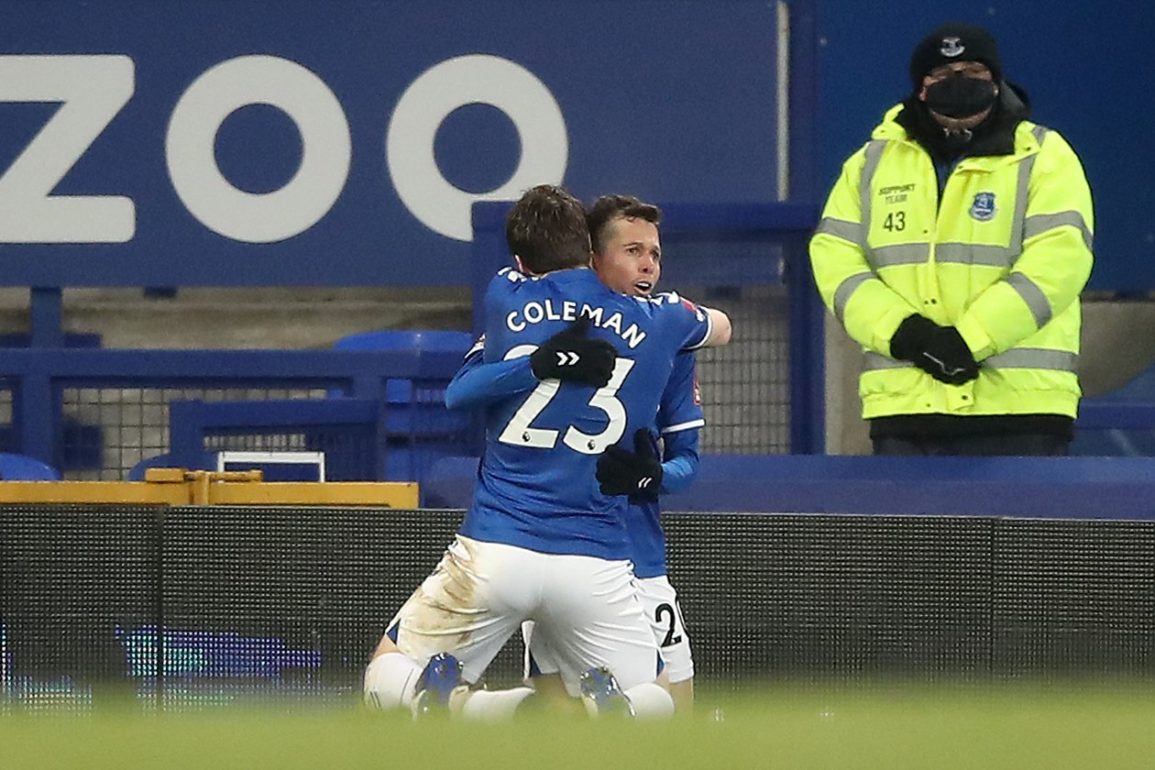 Everton progress to the quarter-final of the FA Cup after an absolute classic of a game at Goodison Park.

It was an instant classic as Everton met Tottenham Hotspur in the 5th Round of the FA Cup at Goodison Park on Wednesday night. The Toffees just squeaked out a win in a 9-goal thriller which wasn’t decided until over 120 minutes of football had been played. Spurs took the lead in the 3rd minute through a Davinson Sanchez header from a corner and were dominant for most of the first half until an Everton offensive explosion took them by surprise. Goals from Calvert-Lewin in the 36th minute, Richarlison in the 38th, and a penalty from Sigurdsson in the 43rd gave the Toffees a 3-1 lead that they expected to take into the half-time break, but Erik Lamela pulled one back for Spurs with one of the last kicks of the half after a defensive error from Yerry Mina. Just 10 minutes into the second half, Dominic Calvert-Lewin seemed to injure his hamstring and was replaced, and things went from bad to worse for Everton when just 2 minutes later, Davinson Sanchez scored again from a corner. It seemed as if Ancelotti’s side were about to give as Spurs piled on the pressure until Richarlison scored a brilliant goal from an acute angle off the post and in. However, the introduction of Harry Kane to the match proved to be significant, as the Spurs #10 latched onto Heung-Min Son’s cross to equalize in the 82nd. The game went to extra-time and the Toffees looked nearly dead on their feet, but the moment of inspiration in the extra 30 minutes would not come from a Spurs player, but rather an unlikely source for Everton. Little Bernard scored a wonderful volley on his weaker foot and sent the Toffees through by a final score of 5-4. Here are my player ratings for Everton 5-4 Spurs.

I mean, you can’t concede 4 goals and expect a high match-rating, but to be fair to him, Olsen made quite a few good saves including ones from Lamela, Son, and Kane, most notably. However, he definitely played his part in the calamity that was Everton’s set-piece defending, and so he averages out at a 6.

Ben Godfrey found himself employed at right-back, a position he hasn’t played since coming off the bench in the Merseyside Derby, and I think you could tell he prefers the left for one reason or another. That being said, Godfrey is a supreme athlete and put in a real shift for the team.

I thought Yerry Mina was very poor today. To start, Tottenham’s second goal which came in first-half stoppage time was almost entirely the Colombian’s fault, as he somehow failed to cut out the through ball to Lamela, which was played right at him. Secondly, even if he wasn’t the one marking Davinson Sanchez, I can’t help but place blame on a center back who is 6’5” when we concede two goals from corners. He also should have gotten his head on Kane’s equalizer, in my opinion, as it was right above his head, but it looked like his legs were made of cement when he jumped for it.

The same goes for Keane. Allowing two goals off corners is simply unacceptable, and he was very much involved in those lapses of concentration. I can’t remember any other particular errors that he committed other than a few poorly executed passes, so I’ll rank him just above Mina.

Lucas Digne didn’t have his usual effect going forward, but he certainly didn’t have a bag game. In fact, he led the Everton team in Key Passes, Tackles Won, Aerials Won, and Interceptions, and so it wouldn’t be foolish to say he didn’t put in a defensive shift. That being said, he was very much part of the blame for Sanchez’s second goal, and so a 6.5 will do.

I don’t even want to know how much ground Abdoulaye Doucoure covered today. It looked like he was running a half-marathon out there. He was absolutely everywhere. I don’t even want to imagine what our season would be looking like without him. His running alone provides us with something we haven’t had in a long time, but when he’s flying around making tackles and dictating play? Wow, it’s a sight to behold.

Was this Tom Davies’ best performance in an Everton shirt? Very possibly. It’s a toss-up between today and that 4-0 battering of City when he Ronaldo chopped Yaya Toure and Gael Clichy into the next week. Davies, like Doucoure, covered an obscene amount of ground, and he progressed the ball forward extremely well, which isn’t something we see from him too often. Sure, he played a few poor passes which almost led to trouble, but overall I thought he was much better on the ball than usual, and his seemingly endless stamina played a huge part in closing out the game after Bernard’s winner.

Gylfi Sigurdsson had 1 goal and 3 assists, so a 7 might seem harsh, but he was marking Davinson Sanchez on both corners from which he scored. Sanchez had 1 Tottenham goal in 92 appearances before being marked by Sigurdsson, and that quickly tripled. That being said, Sigurdsson was the best offensively that he’s been since the 2018/19 season. That chip through ball for Bernard was simply genius, and he did an admirable job filling in for James in the chance creation department. I hope we see this Sigurdsson more this season, well, minus the defensive bits.

Finally! I’ve been saying for weeks that Richarlison would get his scoring touch and his quality on the ball back, and today was the day. The Brazilian scored two fantastic goals, particularly his second which still baffles me to how he was able to sneak that in from such a horrid angle. Outside of those two goals, he was much better on the dribble and coughed up possession a lot less than he has been so far this season. I will be shocked if he doesn’t kick on from here as he should have his confidence back after bagging twice against a Top 6 team. If DCL is out for a few games, we’ll need him to!

Iwobi had no real impact on the game. He was the only Everton attacker that played who didn’t contribute to a goal, and he didn’t look like he would at all. His delivery was spotty at best, and he never really got into the dangerous areas that Richarlison was.

God, I hope DCL is okay. He was fantastic before being replaced after what seemed to be a hamstring tweak. He, of course, scored Everton’s first when he hit a volley with too much power for Hugo Lloris to keep out, and then he assisted Richarlison’s first with a beautiful little flick which found the Brazilian one on one with his man. DCL also won the penalty just a few minutes later. It’s great to see the English International back in goal-scoring form and doing much more for the team on top of that. Let’s hope he’s back in a flash.

I thought the Everton Club Captain did a very admirable job playing in an unfamiliar position at right-midfielder after coming on. He had a few good runs down that flank and was very helpful in winning and keeping the ball to help kill off the game, especially in extra time. A good shift from the skipper.

Bernard was a non-entity for most of his appearance up until he made a darting run into the box, was found by Sigurdsson’s floated pass, and lashed it home with his left foot to win a completely insane cup tie for Everton. Bernard’s future is very much in doubt at the moment, but you can’t deny that he made the impact we needed him to off the bench. What a goal.

Not really much to say about Holgate. I guess we didn’t concede after he came on, so that’s good!