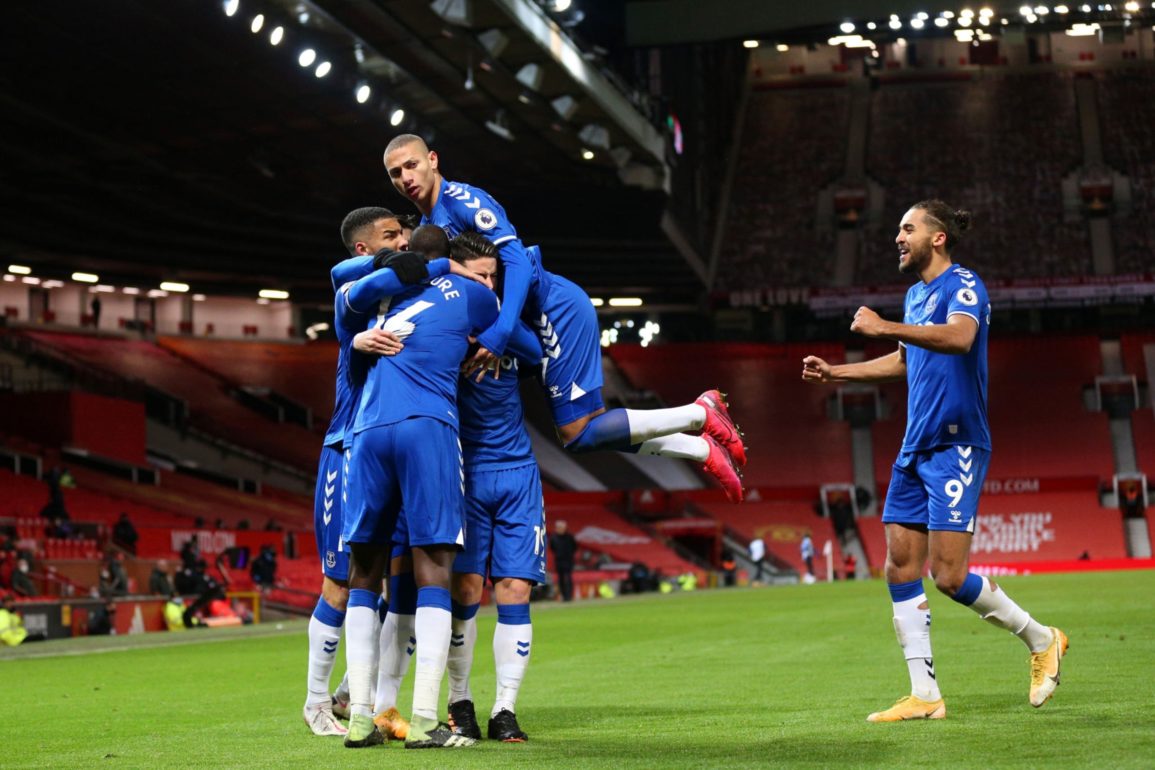 A spirited second-half fight back earned Everton a valuable point at Old Trafford.

Scott McTominay (70′) header looked to have sealed the win for Manchester United, but Dominic Calvert-Lewin (95′) rescued a point for Everton in the last few seconds.

A draw has never felt more like a win! It was a truly remarkable match at Old Trafford, as Everton’s last-gasp equalizer snatched two points out of the hands of title contenders Manchester United, sending Duncan Ferguson into rapturous celebrations in Ole Gunnar Solksjaer’s technical area. It was a tale of two halves, as United scored twice in the first period through a headed goal from Edinson Cavani and a piece of brilliance from the Red Devils’ star man, Bruno Fernandes, gave them a commanding 2-0 lead at the break. However, whatever Carlo Ancelotti said in the dressing room worked a treat, as Everton pegged United back almost immediately through goals in the 49th and 52nd minutes from Abdoulay Doucoure and James Rodriguez respectively. However, all that good work seemed to be undone when Robin Olsen lost his footing and let an otherwise weak Scott McTominay header creep into the corner of his goal. Fortunately, the Scotsman would not have the final say, as the ever-prolific Dominic Calvert-Lewin atoned for his first-half miss by scoring past David De Gea and rescuing an undeserved point for the Merseysiders. Here are my player ratings for Manchester United 3-3 Everton.

Don’t get me wrong, there is no excuse for letting McTominay’s muted effort into the back of the net, but it’s clear that Robin Olsen’s footing let him down. That being said, his footwork needs to be better because it’s not like today’s match took place on the Elland Road pitch that could have doubled as a slip and slide. The Swede’s kicking was also poor, but he had a few decent saves, I suppose.

It’s not hard to imagine Yerry Mina thundering Marcus Rashford’s cross away instead of letting it slip over his head for Cavani to tap home, like Keane did today. Sure, Holgate should have been helping out rather than marking Casper the friendly ghost on the back post, but it doesn’t change the fact that Keane’s only job was to stay on his man and win the header. That being said, Big Mick Kegger continues to be an absolute weapon on attacking set pieces, as it was his flick-on that rescued a point for the Toffees in the 95th minute via the left boot of DCL.

Despite conceding three, I actually thought Ben Godfrey did relatively well, as none of the goals were particularly his fault. One moment in the second half that made me chuckle was when a flick-on resulted in a foot race between the young center-half and the veteran Uruguayan Edinson Cavani, and there was only ever one winner. The kid is a unit. I don’t see him being dropped from Ancelotti’s XI any time soon.

I’ll tell you what, it may have not been Lucas Digne’s best game, as shown by the state of his ankles after Greenwood left him in the dust, but the Frenchman sure knows how to whip in a free-kick. It was his delivery that led to the game-salvaging goal, and so I can’t be too harsh about his defensive… shortcomings, as I’ll put it.

I’m not the biggest fan of Tom Davies, at least in a footballing sense, but I thought he did well today. Despite being understandably overrun for extending periods of the game, when Everton have little to no way to escape their own half, I thought Tom was composed on the ball, and for once was able to break through the lines with a few through balls, two of which led to Doucoure and James’ goals.

Is it a stretch to say Doucoure was Everton’s best player today? I think not. The man does not stop running, and that paid off when he busted a 50-yard sprint to catch up with DCL and eventually tap home De Gea’s rather untidy parry. The same happened when he, for some reason, found himself all the way on the right-wing, collecting Lucas Digne’s deflecting cross and playing a precise ball to the foot of James Rodriguez, who made no mistake in finding De Gea’s bottom left-hand corner. A goal and an assist is fantastic production from the Duke, and I hope to see more attacking output from him going forward as well the continuation of his solid defensive performances as of late.

I may be getting ahead of myself a little bit, but Andre Gomes has now found himself in a good bit of form. Since the new year, he has provided two lovely assists and, Newcastle match aside, has been very good at controlling the tempo of play and pulling the strings in midfield. During the periods of the game in which Everton were totally penned in their own half, the Portuguese seemed to be the only player who could come up with a turn or a bit of footwork that could get Everton out. Let’s hope he can keep this up.

Although his overall performance was disappointing, James came up with the goods when we needed him to, expertly controlling a rifled pass from Abdoulay Doucoure and finished with aplomb. It seemed as though he may have picked up a slight knock, shocker, and was withdrawn as a result. I surely hope he will be fit for Wednesday because we will need him.

Coming into this game, I knew it would be a tough test for Richarlison today, who found himself isolated against Aaron Wan-Bissaka many a time, who is one of the best 1v1 defenders in the Premier League. The defender’s pace and strength seemed to be too much for Richarlison at times, who was forced to lay the ball off or try to find some other route around AWB, which is shorthand for saying that he was unable to provide much of an impact going forward.

Despite dragging a golden opportunity wide with what was just about the last kick of the first half, Dominic Calvert-Lewin did not make the same mistake with the last kick of the second. All was forgiven when Everton’s #9 found the goal that somehow scraped a point out of a game that Everton had no business of taking anything out of. That’s now 13 Premier League goals on the season for DCL, equalling his total from last season. Let’s hope he can break through the 20 goal mark for the first time in his ever-advancing career.

I don’t really have anything to say about Gylfi Sigurdsson. He didn’t do anything wrong, I suppose. That’s an improvement.

I actually thought King did alright. He won the free-kick in the 95th minute, and the rest is history, so I guess so-far so-good for the Norwegian.