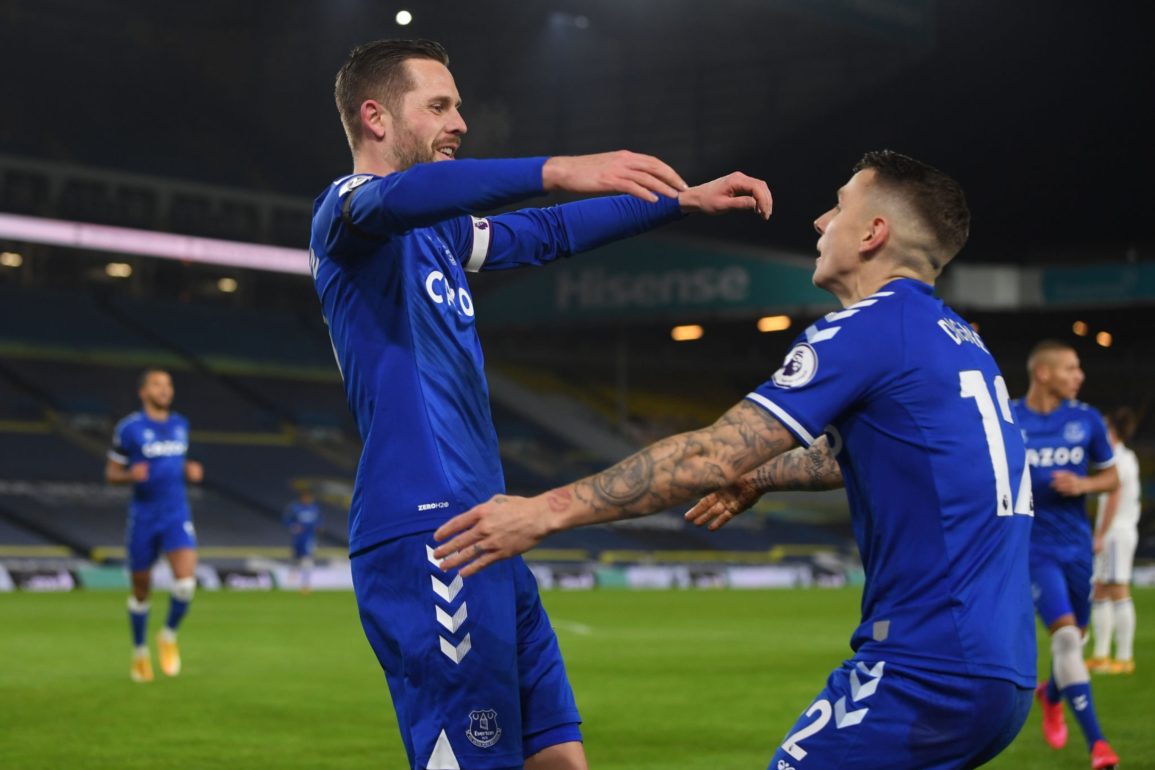 Everton reacted perfectly to a bad performance against Newcastle with a 2-1 victory at Elland Road.

First-half goals by Gylfi Sigurdsson and Dominic Calvert-Lewin secured Everton’s fourth straight away win and sent them fifth with a pulsating 2-1 victory at Leeds United.

I’ve emerged from behind my couch to write this article with my fingertips still bleeding due to that nailbiting finish at Elland Road in which Everton picked up a priceless three points on the road after falling to a more than disappointing defeat to Newcastle. Gylfi Sigurdsson opened the scoring in the 9th minute when the Icelander latched onto a quite literally inch-perfect cross from Lucas Digne, and Dominic Calvert-Lewin was on hand to double the Toffees’ lead when he nodded home Ben Godfrey’s flick-on from a Sigurdsson corner in the 41st minute. Leeds wouldn’t make it easy though, as Raphina scored yet again against Everton, this time right after half time in the 48th minute. Despite a flurry of chances for both teams in the second half, there would be no further scoring and Carlo Ancelotti’s side would go on to win their fourth away match in a row, a feat Everton have not accomplished since the glory days of 1985. On top of that, Carlo Ancelotti has now won more Premier League road games with Everton than Marco Silva and Ronald Koeman combined in 30 less matches with 11. Here are my player ratings for Leeds United 1-2 Everton.

Surely Pickford won’t get his spot back. Right? Robin Olsen was simply spectacular tonight. Despite failing to keep a clean sheet, the big Swede proved to be just as much a match-winner as goal-scorer Dominic Calvert-Lewin, as he managed to turn aside an absolute barrage of Leeds shots in the second half, most notably when he made essentially a quadruple save during one passage of play about 10 minutes into the second half. I’d have absolutely no problem with making Olsen’s transfer a permanent one in the summer, as I do honestly think he’s good enough to be our #1 based on that performance, but if we do decide to find a longer-term option, I’d be more than happy to have him as the backup again next season.

For most of the game, Holgate did well. He was full of running and was as physical as you’d expect a center back playing right back to be. However, he had his moments, the most salient of which was when he failed to clear the ball out of the Everton box, letting Bamford lay off Raphinha for Leeds’ only goal early in the second half. That nightmare start to the half was the last thing we needed, and it was simply schoolboy defending from Holgate. He also was beaten by Raphina and/or Harrison multiple times down Leeds’ left side, and you could tell he much prefers defending deeper as a center back than coming out to close down tricky wingers such as the aforementioned two.

Yerry Mina also had some sketchy moments in the second half, but he was brilliant in the first half and was consistently dominant in the air. I honestly love the fact that we have four center backs that I’d be comfortable seeing in the starting XI at any given moment. Mina has been a rock this year, and the Colombian didn’t seem too short of legs today despite a fast, high-intensity match which felt more like a track meet in typical Leeds fashion.

I mean, I feel like I constantly go on about this lad, but Ben Godfrey has been absolutely outstanding this season. He’s played out of position at left back for the majority of the season, but he stepped back into a familiar center back role today and delivered what could only be described as a sensational performance. The man is an absolute machine. He never stops running, as shown by ridiculous sprint 50 yards up the pitch with the ball, and he defended superbly, shepherding the ball out brilliantly multiple times as well as winning many headers from set-pieces and open play crosses alike. On top of all that, he picked up an assist on the game-winning goal when he rose highest to flick Gylfi Sigurdsson’s corner onto the head of a grateful Dominic Calvert-Lewin. What a signing Ben Godfrey has been. Amazing piece of business.

Lucas Digne’s cross to set up Gylfi Sigurdsson for a tap-in just 9 minutes in was nothing short of world-class. He did not have a good angle, as he was penned in at the corner flag essentially and was off-balance when he swung that ball in, but his cross was inch-perfect and gave the Leeds backline absolutely no chance. It’s now 6 assists in 12 Premier League appearances for the left-back, which is an absolutely absurd sentence to mutter. Digne also defended brilliantly today and had some great link-up play with Richarlison down the left-hand side. A great performance from the Frenchman overall.

We would have been utterly screwed without Abdoulay Doucoure in this game. He seemed to be everywhere, which shouldn’t be a shocking revelation considering what we’ve seen from him nearly every game this season, but today his performance was particularly impressive. He had countless interceptions and made a few rampaging runs with the ball through the midfield, and he should have had an assist towards the end of the match when Calvert-Lewin’s finish was easily read by Meslier after a great break that was instigated by the Everton midfielder. His presence was exactly what we needed to keep up with Leeds’ quick passing and numerical superiority in the midfield, and I can’t wait to watch him rekindle his relationship with Allan in the midfield when the Brazilian returns.

I thought Andre Gomes was really good today, especially in the first half. He was very composed on the ball and played almost a Kalvin Phillips type role, dropping in deep to pick up the ball and spray passes out to the attack. That worked best when he sent a beautiful diagonal to Lucas Digne, and you already know what happened next. Gomes also seemed the most confident in his body that we’ve seen him in quite some time, as he didn’t seem to struggle with the pace and physicality of the game and put in a lot of mileage throughout the 95 minutes. Much improved from Andre as of late, in my opinion.

Sigurdsson scored one of the easiest goals of his career when he strolled onto Lucas Digne’s flawless cross, but the Icelander had a good game overall. He of course had a few misplaced passes and lost the ball a reasonable amount, but he also was much more involved in Everton’s build-up today and whipped in a great cross which led to the winner on top of his own strike, so it would be a bit harsh to give him anything less than this. I was expecting much, much worse if I’m being honest.

The goals haven’t been coming for Richarlison recently, but I’ll tell you what, he did not have a bad game today at all. He was fantastic on the ball, spinning Luke Ayling multiple times as well as engaging in some lovely interchange with Lucas Digne. The only real opportunity that fell to him was when he drove in from the flank and attempted what would have been an absolute worldie of a strike, but he, unfortunately, couldn’t quite get the bend on the ball that he needed. Either way, he put in an absolute shift tonight and is well-deserving of this rating.

Alex Iwobi just wasn’t that involved today, and he didn’t quite have the pace to beat his man and make something happen. We know that the Nigerian is great on the ball, but he seemed to be lacking the dynamism that Richarlison was showing today, and never really created any separation from his marker. He wasn’t particularly poor by any means, but he just couldn’t make anything happen. I personally thought Josh King should have replaced him significantly earlier than the 87th minute. Not Alex’s game today.

It was fantastic to see DCL finally get his name on the scoresheet after his longest goal drought since failing to bag during Project Restart, although he really should have had two and an assist. Twitter was not happy with the English international when he decided not to reward Richarlison’s 60-yard lung-busting run into the penalty area with the lay off he deserved, but rather used the Brazilian as a decoy and cut inside, only to send his shot well wide. He also should have scored late on to put the final nail in Leeds’ coffin, only to telegraph what he was trying to do, leading to a comfortable kick save from young Meslier in goal. He was dangerous today, though, and that was great to see. Hopefully, he can kick on from here and regain his talismanic form from the early season. We’ll need him to if we want our European dreams to come true.

I talked earlier about the incredible depth we have at center-back, and nothing illustrates that more than the ability to bring someone off the bench who has arguably been one of the best central defenders in the whole league this season in Michael Keane. He did what he needed to do for Everton to hold onto all three points.

I personally found it hilarious that Josh King made his Everton debut before the club had even released a single photo of him in an Everton shirt. It was great to see our new #11 make his first appearance in the Royal Blue, and he looked real good in it if I do say so myself. I’m looking forward to seeing what he can do going forward, maybe even against his former club at the weekend.