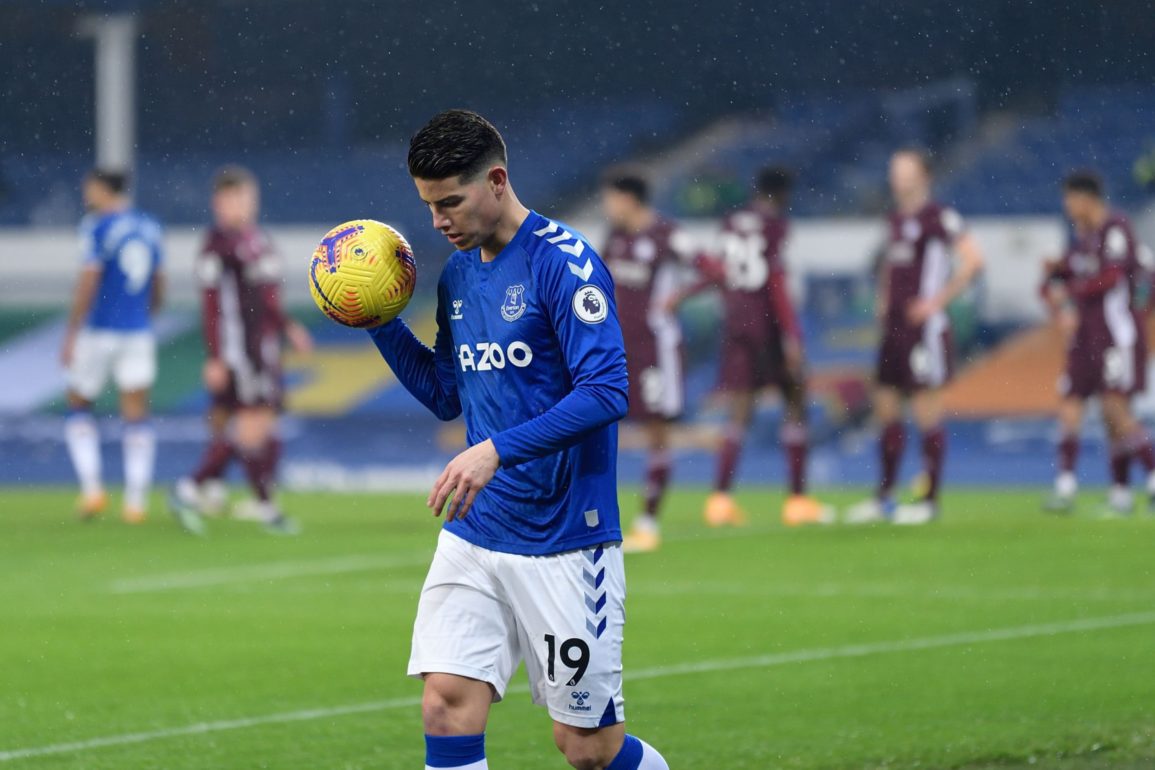 A sublime first half strike from James Rodriguez that would have been owrth the entrance money wasn’t enough to see Everton past a Leicester City side who dominated possession throughout almost the entire game.

After successfully and comfortably negotiating their way past Sheffield Wednesday in the FA Cup at the weekend, it was back to Premier League action on Wednesday with a visit to Goodison Park of Leicester City.

Everton went into the game knowing there would be changes to the side as influential midfielder Abdoulaye Doucoure was suspended having accumulated five yellow cards and with Allan still not back in full training, places in the engine room of the side were up for grabs. Manager Carlo Ancelotti commented wryly that, “a midfield role for Mason Holgagte is an option. Tom Davies will play after doing really well starting in the previous for (Premier League) matches.”

He went to confirm the current availability and injury status when he advised, “We have Digne and Iwobi back, and we have out Delph, Allan, Gbamin and Nkounkou. The others are all good. We don’t have a lot of injuries at this moment because Delph has started to train with us, so practically he is back. We have only Allan, Gbamin and Nkounkou that can recover soon. The squad are all in good condition.”

Ancelotti is fully aware that Leicester will offer stiff competition as they too are in the hunt for European qualification come the season end. He noted, “The games against Leicester and Newcastle will be important for us to understand where we want to be and would like to be in the future. We want to fight for the top four, top six. The fact we are going to play at home in our next two games [means that] after Saturday we know where we are going to be in the future. I hope it will be a nice future. To take Everton to the Champions League is a fantastic motivation for me. It is a great, great desire. This is the target we have for the future.”

The Foxes arrived on Merseyside six points ahead of their hosts but knowing they’d already lost to the Toffees on their own patch back in mid-December when strikes from Richarlison and Mason Holgate saw Everton take the points.

Leicester manager Brendan Rogers was without his main striker Jamie Vardy for this vital fixture, the Albert Steptoe lookalike currently recovering from a hernia operation. Other absentees were Dennis Praet and veteran defender Wes Morgan but the former RS boss was hopeful Ricardo Pereira might be ready to return to first team action having not featured since last March.

Rogers advised at his press conference, “Christian Fuchs has been training. He’s played a great part for us in this first part of the season. He’s not been involved so much of late because of the other players returning.” He continued adding, “But he’s fit and training well and he always makes himself available if he’s required. I’ve said it many times, (picking a starting XI) is the most difficult job, especially when you have top-class professionals and I’m just thankful, with all the injuries we’ve had, that they are back and available and getting game time. They all know that all of them are required. The same XI won’t play in every single game between now and the end of the season. The players respect the spirit of the team.”

On a cool, damp evening under the Goodison lights, our referee was Mike Dean.

A steady opening saw the Blues looking to build down their left flank through Gomes and Digne, Leicester countering with Barnes pulled up for a foul whilst turning to shoot. A Richarlison foul on Barnes gave the Foxes an early free kick and Richarlison redeemed his error with a powerful clearing header. The visitors with more possession in the opening exchanges and Barnes showing his pace getting away from Holgate and cutting in from the left flank before the move broke down.

Barnes was causing problems and he drew another free kick from a foul by Mina to set up a clear shooting opportunity, Maddison seeing his shot hit the wall and the Blues clear easily but, the visitors were quickly back on the front foot as they settled into their work. And another flowing move ended with Maddison curling a shot from outside the area just over the bar – the opening quarter hour dominated by Leicester.

Everton won the first corner as Davies threaded a ball into the path of Digne and his cross aimed toward Richarlison and DCL saw Justin happy to put the ball behind. Schmeichel punched the cross away and Tom Davies lashed a first time shot from just outside the area wide of the target.

Castagne under pressure from Digne conceded a second corner, this time from the left that the Frenchman swung in, Mina unable to get a telling header and the Foxes were able to clear. Michael Keane took a knock in the face that drew blood but, he was okay to carry on before Davies went down as Perez got his boot up high, Everton getting a free kick that Rodriguez lofted forward and Mina was pulled up for shirt tug. Evans was cool under pressure, turning to clear a cross from Gomes aimed towards Richarlison as Everton enjoyed some better possession.

Just before the half hour mark, Davies and Gomes worked the ball wide for Digne to then set up James Rodriguez for a cross that was blocked and he picked up the loose ball to ghost past Fofana and curl a delicious right footed shot in off the far post – a simply stunning strike from a world class player.

Leicester won a corner on their right and the Blues dealt with it nonchalantly with Rodriguez impudently involved to work the ball away from any potential danger. Ndidi went down five minutes before the break and needed treatment on his left thigh before being replaced by Mendy. In similar fashion to the game at the King Power Stadium, Everton appeared happy to concede possession, confident in their ability to defend and hit Leicester on the break. As three added minutes were signalled, Justin saw a yellow for a foul on Richarlison after he’d been found by Tom Davies who was having a good game in midfield, repaying the faith shown in him by manager Carlo Ancelotti. A late shot by Albrighton didn’t present Jordan Pickford with any problems and the Blues took their lead, courtesy of that sublime James strike, to the dressing room.

No further changes of personnel by either manager for the second half that saw the Blues attacking the Gwladys Street End, as the rain continued to fall. Leicester with an early free kick saw the ball into the box skid off the head of DCL to give the visitors a corner that DCL cleared better. Ben Godfrey took a tumble shepherding the ball away from Maddison and needed a moment of treatment before carrying on. Leicester won a second of the half and from it, Pickford saved well from Barnes and Justin put a side footed second effort wide of the goal.

The second half began in very similar fashion to first with Leicester seeing much more of the ball but not finding it easy to break down the Everton rearguard, and when Perez did work a half opening, excellent defending by Michael Keane saw the threat averted. Tielemans with a teasing cross aimed for Perez saw Pickford quickly off his line to punch the ball clear. Holgate with a timely challenge on Barnes conceded another corner that Maddison took short to Albrighton, his cross headed clear by Richarlison.

Perez won a free kick dead centre just outside the penalty area D, Maddison seeing his shot hit Richarlison in the face. The Brazilian doing his fair share of defending, along with DCL working for the team cause at both ends of the field.

An hour gone, the Blues ahead on their only shot on target of the game and defending as a unit denying Leicester. Godfrey denied Castagne to give Leicester another corner and again, the Blues worked well, DCL with the final clearance. James Rodriguez picked up a yellow card for clipping the ankle of Maddison, the free kick headed clear by Tom Davies, having an excellent game in front of England manager Gareth Southgate. Albrighton with a cross from the right to the near post was well gathered by Pickford as Leicester kept coming forward, probing for an equaliser. A great ball into the box for Maddison saw Godfrey, Mina and Keane converge to deny him a shot at the expense of a corner.

The visitors pressure tolled in 67 minutes as from quick corner Tielemans fired a low shot through a forest of legs and Jordan Pickford couldn’t hold it, the ball squirming away from him and in off the post.

Rogers made his second change sending Under on to replace Albrighton for the restart, the Blues trying to get forward on a long throw-in from Holgate that didn’t reach DCL.

Gomes spread a ball wide for DCL to find Rodriguez but when the Colombian played the ball into the area, DCL and Richarlison got in each others way and the ball went out of play for a goal kick. Another corner went the Foxes way with Pickford not troubled by the ball into the box from Under. Everton needed to get forward and a quick throw out from Pickford saw Rodriguez release Gomes for a surging run that should have earned a free kick, referee Dean playing on and the chance was lost as DCL couldn’t control a cross from Richarlison.

Pickford saved well from Maddison to concede and other corner and Leicester replaced Evans with Soyuncu on 76 minutes as the corner was easily cleared. Davies played the ball wide for Holgate to hang a deep cross towards DCL who won the header but couldn’t find the power or direction to beat Schmeichel.

Leicester got forward quickly again to win their tenth corner of the game but wasted the set piece opportunity. Everton made their first change, Mason Holgate replaced by Alex Iwobi for the final ten minutes. Rodriguez chipped a ball towards Iwobi, Justin conceding a corner that saw Maddison block a shot from Digne and a follow up cross reach Rodriguez who couldn’t get enough curl on his shot.

Gylfi Sigurdsson replaced James Rodriguez with five minutes left in normal time. A long ball out of defence from Mina found Richarlison, Castagne doing enough to concede a corner that the Icelander took, Richarlison climbing but unable to direct his header on target.

A late cross from Lucas Digne was met by DCL, his first clear header of the night and he put it wide, and was immediately replaced for the final minute by Seamus Coleman. Keane with an important block denied Maddison a last minute winner, the resulting corner cleared.

Three more minutes were signalled and Coleman won a late corner for the Blues. Digne took and it came through to Gomes whose initial control let him down and the chance was lost.