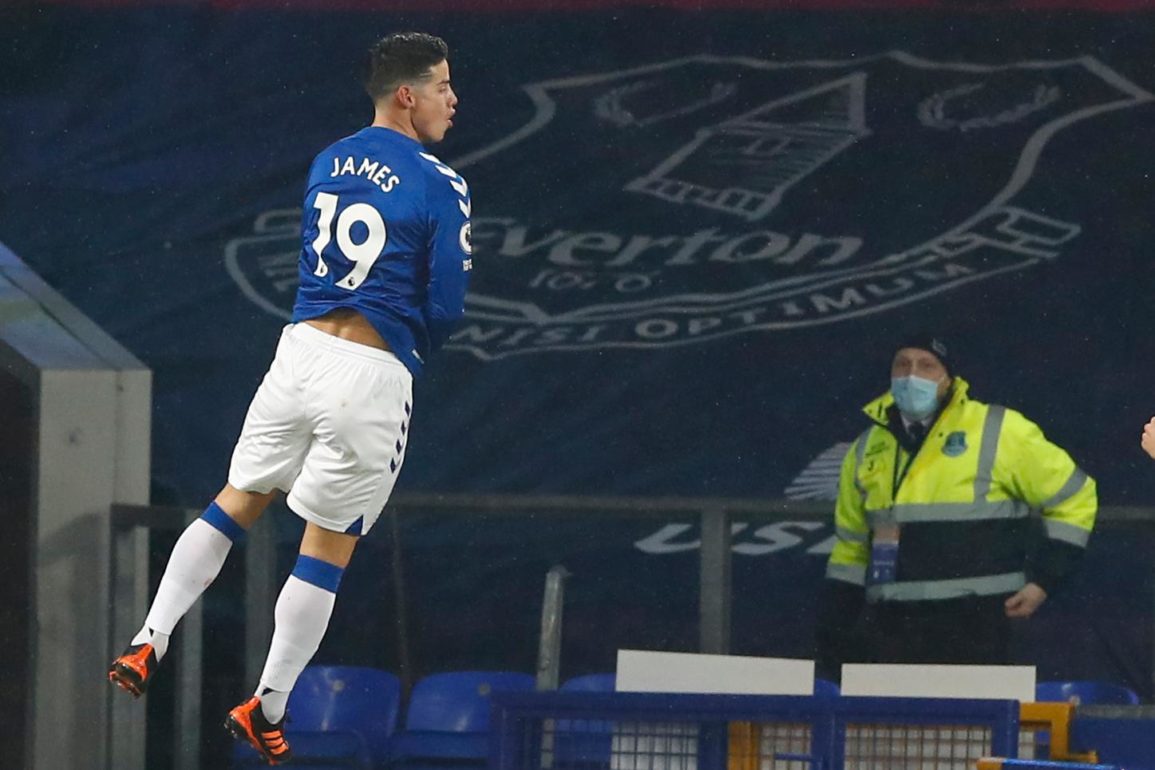 Clinging to the first half lead given to them by James Rodriguez, Everton were denied three points when Jordan Pickford let Youri Tielemans shot squirm into the net to rescue a point for the visitors.

You can rate each Everton player’s performance below and get involved in the post match discussion in our forum, where you can also vote for your Everton man of the match.

At the end of the day, a point at home against a very talented Leicester City side isn’t anything to scoff at, but the manner in which the three points were lost was very frustrating. Without Doucoure and Allan, we all knew Everton would not win the midfield battle today, but even after Wilfried Ndidi went off injured just before halftime, the Toffees couldn’t even get close to Leicester City in the middle of the park. James Rodriguez opened the scoring with an absolute blinder off his weak foot, but Youri Tielemans deflected effort somehow beat Jordan Pickford and recovered a point for the Foxes. After the Belgian’s goal, Everton seemed to show up for the first time in the second half, but chances for Richarlison, Calvert-Lewin, and Andre Gomes went begging, and the game ended in what was most likely the fairest result. Everton remain in 7th but are now just 1 point behind their Merseyside rivals with a game in hand, while Leicester City sit in 3rd on 39 points. Here are my player ratings for Everton 1-1 Leicester City.

Simply put, I am done with Jordan Pickford. This was the last straw. I think Robin Olsen should be starting from now on, and I strongly believe that Everton’s first priority in the summer should be to find a new first-choice goalkeeper. It’s as simple as that. Jordan Pickford has cost us so many points in the past few seasons. He’s not good enough. Time to cut our losses and move on.

We got what we expected from Mason Holgate. Solid defensive display, pretty toothless going forward. I was hoping we might see him in midfield today, but he continues to do a decent enough job at RB. I think we need to bring in a natural RB to succeed the aging Seamus Coleman despite the fact Holgate has filled in admirably, but it’s just clearly not his best position.

I thought Yerry Mina was commanding today, as ever. He won lots of aerial balls, shocker, and defended soundly overall. He didn’t really show up on attacking set-pieces today, which was disappointing considering how poor Leicester have been defending them so far this season.

Michael Keane yet again proved himself to be an elite center-back in this division, and I’d be shocked if Gareth Southgate didn’t notice his stellar performance from the Goodison Road Stand. His performance level has remained consistently high all season, and today was no different. He saved a point for Everton late in the second half when he managed to block James Maddison’s effort on the swivel which was surely going to make its way past Jordan Pickford given the velocity it left the midfielder’s boot with. Big Mick Kegger is here to stay and dare I say it, I think he should become Club Captain upon Seamus Coleman’s departure.

Ben Godfrey is similar to Holgate in the fact that he clearly has not developed the attacking side of his game, but my word is that man a unit. He’s faster, stronger, more dedicated, and more tireless than anyone else on that pitch. The man is a freak of nature. He defended really well again today, and his impressive work rate was on full display when he made a lung-busting 40-yard run to overlap Alex Iwobi in the dying stages of the match. I can’t help but love the way he plays. He gives his all for the badge, and I deeply appreciate that.

On the ball, Tom Davies wasn’t awful today. He controlled his body well and had some nice passes, but he clearly is not a defensive midfielder. Often times I saw him pointing a la Gylfi Sigurdsson while standing in place, leaving Maddison to roam free just behind Ayoze Perez and the occupied Everton backline. He was chasing shadows for the vast majority of the game and was nowhere to be found for the first 20 minutes of the second half. I will not be sad to see Abdoulay Doucoure drop him right back out of the starting XI on Saturday.

Gomes suffers from the same problem as his younger counterpart. He’s pretty useless defensively, but at least he progresses the ball well. His crossfield diagonal led to James’ sublime opener, and he had quite a few good runs up the pitch before passing at what seemed to be the last possible moment before he would lose the ball. He had a chance off Everton’s 93rd-minute corner, but his touch betrayed him when he tried to bring the ball down on his chest, and the chance was lost.

I thought Lucas Digne played alright considering he was occupying a new position at LW, which he very much isn’t used to. He has some of the qualities needed to play there, such as his quality of delivery, which was very much still on display today. I’m not quite sure why Carlo Ancelotti decided to start him there, as I would have much preferred he played his natural position at LB, while Godfrey could have easily slotted into RB instead of Mason Holgate. I think Iwobi on the right and Richarlison on the left would have been a better set-up and I expect Carlo to decide on something similar to that on Saturday. Also, Lucas Digne is really good in the air, if you didn’t notice.

I mean… Like… There’s not much to say. I think I summed up how I feel about James Rodriguez pretty well in my Sheffield Wednesday player ratings, but here’s a brief summary: James Rodriguez is an outstanding footballer and it is an absolute privilege to have him here at Everton. I mean that goal… my word. On his weak foot nonetheless. Just brilliant. And it’s not like that was his only contribution to the match. His range of passing continues to amaze, and his close control is unwavering. I think it’s clear to see that he is better playing as a 10 than he is floating in off the right flank, and so I hope we continue to see him employed in that area. What a player.

Yet again, there’s not much for me to say that I didn’t already cover in the last edition of this series. Richarlison’s lethal touch is not there at the moment. His work rate? Never left. But he can’t seem to beat defenders on the dribble at the moment, and he headed what was a great chance from a beautiful Lucas Digne delivery well over the crossbar despite being completely unmarked and about 10 yards from Kaspar Schmeichel’s goal. We need him to get back to his best very soon if we want to compete for the Champions League places.

It’s now 6 league games without a goal for DCL, who has seemed to have lost his finishing touch as of late, at least in the Premier League. His best chance of the match came from, shocker, a Lucas Digne cross, which he was unable to steer on target. Let’s be honest, he should do better. When I saw him rising to meet it, I was expecting the net to bulge, but unfortunately, the ball slipped past the wrong side of Kaspar Schmeichel’s post. That just seems to be how it’s going for Everton’s lethal strike partnership at the moment. I hope both of them can get on the scoresheet on Saturday against what is at the moment a horrendous Newcastle side.