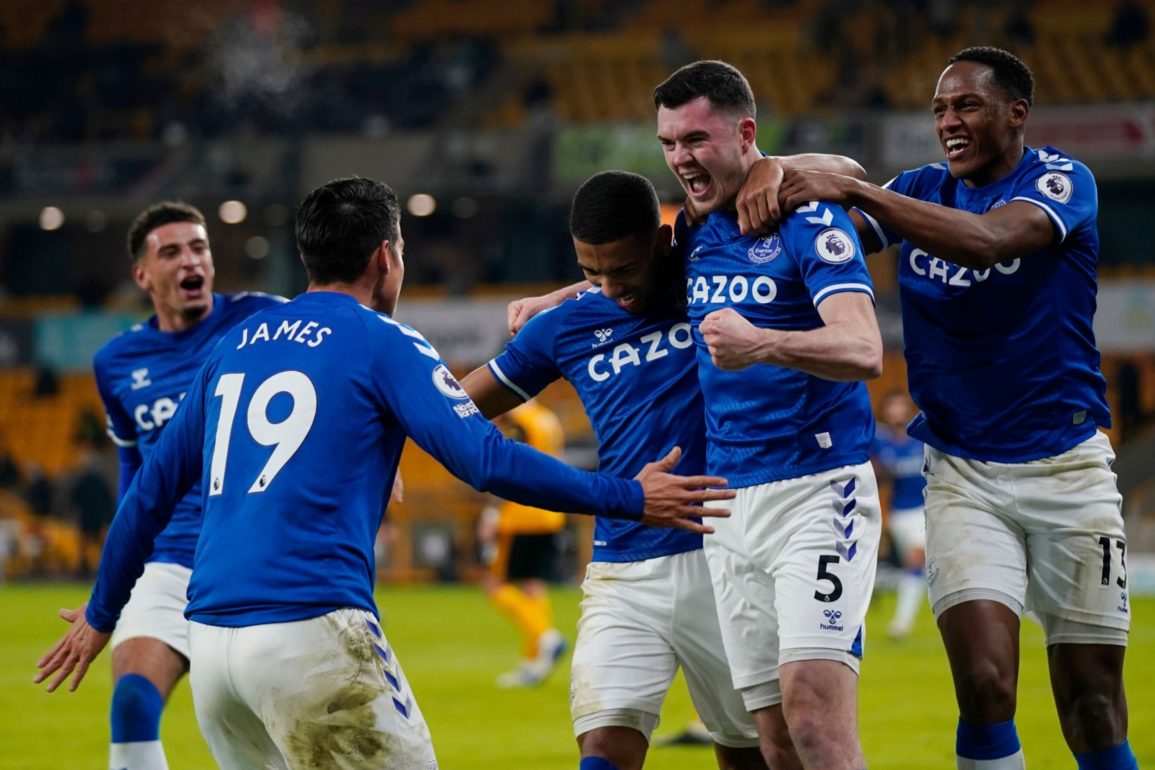 Alex Iwobi with an ice cool side foot finish and a thumping header late on from Michael Keane drove Everton up to fourth with an excellent result, avenging the disappoint,emt of last seasons visit to Molyneux.

After the exertions of extra time in the FA Cup barely eighty hours later, Everton were back in Premier League action with a visit to Molyneux to take on Wolverhampton Wanderers. In comparison, Wolves are a little off the pace they set last season sitting in 13th place in the table while Everton have reversed their fortunes to sit seven points and six places better off than their hosts.

Wolves, having successfully progressed past Crystal Palace in the FA Cup, had no new injury concerns and manager Nuno Espirito Santo updated the media on his injury situation saying, “We have Boly out, we have Marcal out, we have problems, and we will try to find solutions for them. Jonny is improving, he’s doing very well, but he still has time to rejoin us again. It’s very good to have Raul [Jimenez] around. It’s very good to see him improve. It’s very nice to see him smile and already doing some exercising in the gym and having the positive thought that he’s going to continue and rejoin us. This is what pleases me and everybody around the club more, that we’re going to have Raul back.”

Hoping to be involved against the Blues, 20-year old Portuguese midfielder Vitinha signed on loan from Porto said, “I’ve personally seen a few games of Everton and I think they’re a pretty good team, like almost every team in this league. They have some very good players and some high-level players. But I think we’re ready for it. We have trained all week for it and will prepare the game as well as we can until it’s game time, but we are ready for the match and to try to take the win.” And leaving his homeland to join many of his countrymen in the Black Country he added, “It’s a new country, a new challenge for me. It’s the first time I’ve left my home country and my teammates have been great, the club is amazing, it’s huge and I’m very happy to be here. I still have to learn much about the city of Wolverhampton and the rest of England, but I’m sure I will eventually get the opportunity.”

Looking ahead to two tough away games for Everton in the week ahead, Carlo Ancelotti commented, “We are going to play away games against tough teams, we need to get results to stay in that position. It will be difficult, we have players out – but we have the squad to manage these kinds of games. Without an important player like Dominic, we have to be able to replace him in a different way. A player with different characteristics will play and we have to adapt for this. We will be less dangerous on crosses, for sure, but maybe we can be more dangerous on the final pass.”

Momentarily referring to the corresponding fixture last season, he noted, “We don’t have a good memory of the last game we played there – it was one of the worst games we played. But now we have more consistency and knowledge. Defensively, we are better compared with six months ago and I hope we can show that on Tuesday.”

And briefing the media on squad availability the boss advised, “Jordan Pickford is okay, for Richarlison, we have to wait until after training today [Monday] to make a decision. Calvert-Lewin is not available because he has a hamstring problem. I think he can recover soon. He had a little problem during the week before the West Ham game but, because of the fact he has not had this type of injury before, he was not able to judge his fitness with 100 per cent [accuracy]. He played all the game against West Ham, which means this is not a really important injury. But we want to keep him safe and, when he comes back, to be 100 per cent fit. For Allan, I think he will be able to return in around 10 to 15 days.”

Our referee in the Black Country was the ever unpopular Martin Atkinson.

Ben Godfrey with an early interchange with Sigurdsson got into the box but couldn’t find a fellow Blues shirt and Wolves worked the ball clear. Everton with the lions share of possession in the opening five minutes with Lucas Digne playing ahead of Ben Godfrey and they ploy worked a treat in the sixth minute as Rodriguez took a short ball from Iwobi to spread it wide left to Digne and his ball into the box was met sweetly by Alex Iwobi to side foot the Blues ahead from fifteen yards.

Wolves tried to respond and it was Iwobi getting back who saw the ball back to Holgate for him to clear, a rare incursion by the home side into Everton territory in the opening ten minutes that had seen the Blues passing the ball around comfortably, looking to work another opening.

Wolves won a corner as Semedo got past Digne, Tom Davies putting the ball behind and on the second attempt from the set piece Wolves levelled, Ait-Nouri getting beyond Doucoure to cross for Neves to volley home just before the quarter hour mark.

Pickford came off his line to punch away a deflected shot and as Wolves came again, the England keeper saved well low to his right from Silva. A good move saw Iwobi cut in off the right flank, play a one-two with Rodriguez and gain the area but his shot lacked the power and direction to beat Patricio for a second time. An entertaining opening twenty minutes had flown by with chances at both ends of the pitch.

Keane to Rodriguez and a good turn by the Columbian saw him find Iwobi down the right flank and his cross intended for Sigurdsson was hurriedly cleared by Wolves. Wolves won a second corner as a wayward shot from Neves was pushed behind by Pickford, Mina and then Holgate with clearing headers and then a cross from the right by Neto was too strong for Silva at the back post.

Doucoure linking with Iwobi crossed towards Sigurdsson, Wolves conceding the first Everton corner that Rodriguez took and Wolves cleared. A harsh hand ball against Digne gave Wolves a free kick that saw Pickford easily claim the deflected cross. Davies to Iwobi to Doucoure and Wolves got it into touch before Rodriguez could get to the cross as the play quickly switched to the other end of Molyneux.

Half an hour gone, one-one, and a game being played at a decent pace was nicely poised.

Wolves were looking the more fluent side now and seemingly targetting the left side of the Blues defence, Everton more passive before a flowing move started by Iwobi and involving Rodriguez, Sigurdsson and Digne disappointingly broke down as Wolves got back in numbers.

With no out and out striker on the field, it was vital that the Blues made their possession count, not give the ball away cheaply and most of all, support each other when going forward. Ait-Nouri broke down the left and fed Dendoncker who pushed his shot miles wide and the inexplicably tried to claim it was deflected away for a corner. Lucas Digne got forward on the left and put a superb cross into the box that Saiss was happy to turn behind for a corner that saw Mina head well over the bar.

One added minute was signalled and the teams retired for a slice of orange level at one-one.

Neither manager made any half time changes for the second half, Everton with a more experienced bench of substitute options would surely introduce Richarlison at some point to add a more natural focal point to the front line. Wolves won an early corner and Michael Keane got an excellent clearing header away.

Doucoure was rightly booked for a poor challenge on Neto after Semedo had broken clear of three tackles to feed him threateningly into the Everton half. Neto needed treatment on his right knee ahead of the free kick after he’d limped off. Moutinho lifted the free kick towards Dendoncker but under pressure from Keane, he headed well wide of the target.

Rodriguez with a good tackle and turn earned a clattering from Neto who’d returned to the pitch seemingly none the worse for the challenge by Doucoure. Approaching the hour mark and with Gylfi Sigurdsson looking like a fish out of water as the alleged number 9, surely an appearance from Richarlison was on the cards?

Changes by both managers in the 64th minute saw Andre Gomes replace Tom Davies for Everton and Gibbs-White replaced by Hoever for the home side. Another good cross from Iwobi was turned behind for a corner but Wolves were alert to it and cleared without too much trouble.

Cemedo forced Digne into conceding a corner, Mina with the clearing header and Iwobi back to clear the next ball into the Everton area. Holgate was booked for a foul on Neves, thirty yards out, slightly left of centre and eventually Neves shooting from distance and wide of the target.

Into the final twenty minutes, come on Carlo, we need some dynamism up front… send Richarlison on to win it… please.

A good move saw Gomes find Rodriguez who instead of shooting fed Iwobi and his shot was deflected away for a corner. Before the set piece, Everton made their second change on 76 minutes, Richarlison replacing Sigurdsson and from the second effort, a great cross from the left by Gomes found Michael Keane and his powerful header back across goal gave Patricio no chance.

Cutrone for Silva was the Wolves response for the final 13 minutes as they tried to come from behind for a second time. Keane at the back cleared a cross from Hoever and then headed a cross from Moutinho clear. Gomes appeared fouled but ref Atkinson unsurprisingly played on and a shot was turned behind for a Wolves corner much to the Blues anger. Composure was retained and the set piece was cleared and the clock hit 83 minutes.

A free kick for hand ball against Doucoure dead centre was lined up by Neves as the wall was formed inside the Everton penalty area, and Neves saw his shot shave the outside of the woodwork. Moutinho was the third change for Wolvesm replaced by Vitinha and Carlo Ancelotti responded sending Seamus Coleman on for James Rodriguez to strengthen the defence for the final minutes.

Richarlison drew a foul from Semedo who saw yellow, Digne forcing Coady into a hurried clearance from the free kick. A one-two then with Richarlison saw Digne win another corner to eat up some more valuable time ahead of five added minutes being signalled.

It was do or die now for Wolves as the Blues looked to record their sixth win on the road this season and move up to fourth in the table. Neto won a corner off Holgate, Hoever unable to direct his header on target under pressure from Yerry Mina. Ninety seconds to go and Gomes fed Richarlison into space only for him to mis-control and the chance of the insurance goal was lost. Richarlison drew another free kick and a booking for Hoever and that was that. A game played with no recognised striker had been won with two clinical finishes.

Vote for your Everton MOTM and get involved in the post match discussion in our Everton forum.

You can also rate each players performance out of 10 below. Can’t see the below widget? Try clicking here.