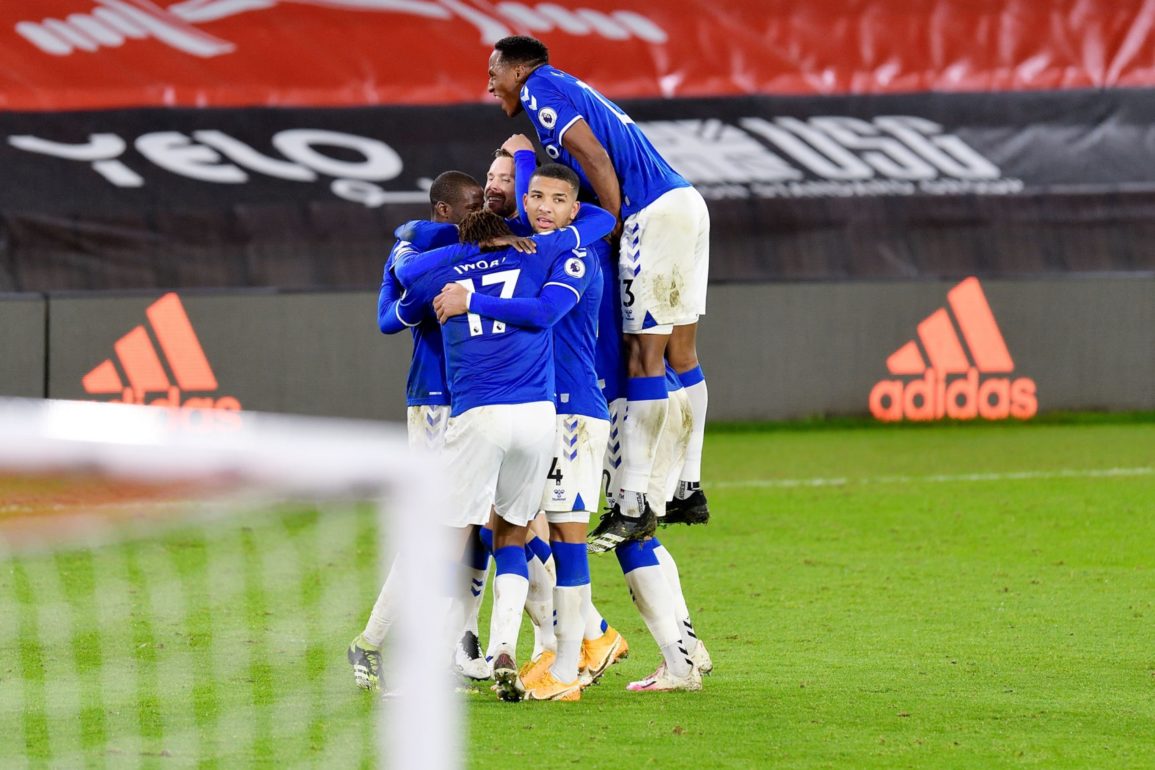 Rate them below and get involved in the post match discussion in our forum, where you can vote for your Everton man of the match.

Carlo Ancelotti’s Everton made it four league victories on the trot after grinding out a 1-0 win at Bramall Lane against bottom-dwellers Sheffield United on Boxing Day. The Toffees have now won on Boxing Day for the third consecutive season for the first time since they won 7 in a row from 1984 to 1990 (Thanks to @EFC_Statto for that). The win put Everton up to 2nd prior to Sunday’s fixtures and Everton have now won 5 of their first 8 away games of the season. The Toffees have not won more than 5 away games in an entire season since 2013/14 when Roberto Martinez’s side won 8 road matches en route to a 5th place finish. The Blues are currently on pace to smash that record. Victory over the Blades did not come easy, however, as injuries to both sides combined with horrible conditions in Sheffield made for a scrappy game which was ultimately won by a singular moment of quality that came from the right boot of Gylfi Sigurdsson, who seems to have finally reclaimed some form after a run of 5 consecutive starts in the team in all competitions. After keeping just one clean sheet in the first 11 Premier League matches of the season, Ancelotti’s “Four center-back” defensive unit has now kept 3 in 4 and has not allowed a goal from open play since the 1-1 stalemate at Turf Moor. Despite missing 4 of their 5 most important players, Everton found a way to win, which was most important. I seriously doubt that any of the Everton teams of the recent past would be walking out of Bramall Lane with all three points, but this team has all because of Carlo Ancelotti and the revival he has sparked at this historic football club. Here are my Player Ratings for Sheffield 0-1 Everton.

Pickford really didn’t have much to do today, but everything he did, distribution aside, he did quite well. He commanded his box when he needed to, but his best moment of the match was certainly in first-half stoppage time when he got the slightest of touches on Oliver Norwood’s curling effort from inside the box. Other than one brief scare when he booted the ball off the back of Rhian Brewster, he didn’t mess around with the ball at his feet, and he didn’t repeat the Origi crossbar error when Basham’s cross-turned-shot troubled him during the closing stages of the match. Job done.

I think today showed us that Mason Holgate is certainly a defender in every definition of the word. Although he can do a job at right-back helping to keep teams out, he offers little to nothing going forward, and it seemed like Sheffield United were aware of that considering the amount of space they were affording him in the first half. Holgate was poor on the ball, but when Seamus Coleman replaced Michael Keane, the young Englishman moved back into his preferred position in the center of defense and played considerably better to close out the match.

I thought Yerry Mina was superb today. He won essentially everything in the air defensively, and his positioning was spot on throughout the whole match. He was very calm in what could have been nervy situations, and he showed real poise on the ball. He placed all his passes well and even showed a few clever bits of footwork to make the onrushing Oli McBurnie look a fool. The big Colombian was an instrumental part of yet another clean sheet for Everton, and his upturn in form has coincided with Everton’s recent surge up the table. It was a fantastic performance today from Mina, who had 9 recoveries, 8 clearances, and a colossal 8 aerial duels won. That says it all.

I was a bit confused as to why Micheal Keane was withdrawn for Seamus Coleman instead of Mason Holgate considering that Keane was playing very well next to his familiar Colombian partner, whilst Holgate was playing poorly. It didn’t end up mattering, but I thought Keane did well in marshaling the backline. His defending may not have been as eye-catching or last-ditch as Yerry Mina’s, but I thought he was solid yet again in his hour or so on the pitch.

Ben Godfrey has similar limitations to Mason Holgate while playing as an unconventional fullback, but I thought he was tidier on the ball than Everton’s reigning Young Player of the Year. He also possesses a turn of pace that Holgate does not, which helped him to not only get much further up the pitch but to also track back and recover well. He clearly does not have the range of passing and creativity that the absent Lucas Digne does, but he continues to do a job defensively which is all we can really ask of the young center-back.

Abdoulay Doucoure has put in an absurd amount of mileage this season. He never stops running, and he gets involved in everything offensively and defensively. He won countless second balls, particularly in the air, and got forward enough to ultimately have a definitive impact on the game when he teed up Gylfi Sigurdsson to slot home the winner. Doucoure is one of the first names on the team sheet for Carlo Ancelotti, as shown by the fact that he has been in the Italian’s starting XI in every single Premier League match so far this campaign. It’s easy to see why he is becoming such an important piece of this Everton squad.

It’s clear to see why Tom Davies came into today’s lineup, as his energy in the midfield was essential to acquiring all three points. He was seemingly everywhere, and he had one of his best performances on the ball in many years. Other than a few misplaced passes, he was the only Everton player who seemed to really show up for the first half of the game. He was very effective playing as the deepest in the midfield picking up loose balls and making tackles before proceeding to progress the ball forward into either Sigurdsson or to Gordon/Iwobi in the wide areas. I was a bit confused as to why Carlo chose to replace him with Andre Gomes with 15 minutes remaining, but the Portuguese did well in his place, so no harm no foul.

Gylfi Sigurdsson’s overall performance was… a bit lacklustre. I thought he had quite a few poor giveaways in the first half, most notably when he tried to direct a cute little flick to DCL who wasn’t even in the area, which led to David McGoldrick being played through on goal. Luckily Ben Godfrey was there to clear off the line and the offside flag would have gone up anyway. I also thought Sigurdsson’s free-kick delivery was very disappointing, as most of his deliveries were comfortably caught by Aaron Ramsdale, who is not the most assertive of keepers in the Premier League. That being said, Gylfi Sigurdsson was the one to come up with the moment of quality that the game was crying out for. He made absolutely no mistake when Abdoulay Doucoure rolled the ball into his path in the 80th minute, and the Icelander cleanly hit the ball straight into the bottom left-hand corner and claimed all three points for the Toffees. He also worked hard defensively, making 7 recoveries throughout 90+ minutes. Sure, he did not have an amazing all-around game, but he came up with the goods when we needed it most.

I, like many Evertonians, was very excited to see Anthony Gordon finally named to the starting XI for the first time in the Premier League this season. Unfortunately, the 19-year old academy product did not have a real impact on the game, but I didn’t think he was particularly poor. He was relatively tidy on the ball apart from a few miscontrols that were more a result of his teammate’s questionable passing than personal error. He clearly still possesses heapings of pace, but he was unable to fully utilize it as he was replaced just before the game started to finally open up. If Richarlison misses a few more games due to his concussion, I would not mind seeing Gordon get some more playing time, but that may be difficult considering the performance of the man who replaced him today.

For a large portion of the game, Alex Iwobi provided the only real attacking impetus for Everton. He showcased some real individual skill when he weaved through multiple defenders before attempting to lay the ball off for Anthony Gordon, but his impressive run, unfortunately, led to nothing. He also had a brilliant passage of footwork and ball control at the end of the game when he somehow kept the ball in play at the corner flag and somehow beat a few defenders before winning a corner kick. Although it would be nice for him to get his goal, I thought Iwobi did what he needed to do today, and continues to improve under Carlo Ancelotti.

It was not a very notable performance for Everton’s number 9 against his boyhood club, as he was unable to make a real impact on the match. He had one chance in the first half when he beat a defender to a long ball, controlled it with his chest, and fired just wide on the full volley. It would have been a simply spectacular goal, but it wasn’t to be. After that, there wasn’t much to take note of from DCL, who has now failed to score in his last 5 games in all competitions, which is by far his longest goal drought of the season. Most of that has been down to a lack of service, to be honest, and he has still been very involved in almost every Everton goal during that stretch. I hope to see him back on the scoresheet very soon.

As much as they confused me at the time, I think Carlo Ancelotti really got his substitutions right today, and there is no better example of that than Bernard. The little Brazilian was very good on the ball and significantly improved Everton’s threat going forward in the last half-hour of the game. His work led directly to Sigurdsson’s winner, as he was the one who knocked the ball down to Doucoure in the box, who then put the ball on a plate for Everton’s number 10. After a poor showing midweek, it was great to see Bernard make such an impact from the left-hand side in Richarlison’s absence. Speaking of, Everton have finally won a game in which Richarlison didn’t play! Consider the curse broken.

It’s been great to see Everton’s Club Captain slowly return to the team, and he provided the legs and defensive stability required of him when he replaced Michael Keane just after the hour mark. Hopefully, he will reach full fitness soon and can return to the starting XI week in, week out.

Another player who really disappointed in Everton’s midweek Quarterfinal defeat was Andre Gomes, who, like Bernard, played really well against the Blades after coming off the bench. He was good on the ball and showed off some great agility and footwork, as well as some rare physical prowess when he bodied Ethan Ampadu into 2021 at the end of the game. He also drew what should have been a penalty when he broke forward and was fouled in the box after dribbling past a Sheffield United defender. It was nice to see Gomes play that well after what has been a disappointing start to the season for the Portuguese.