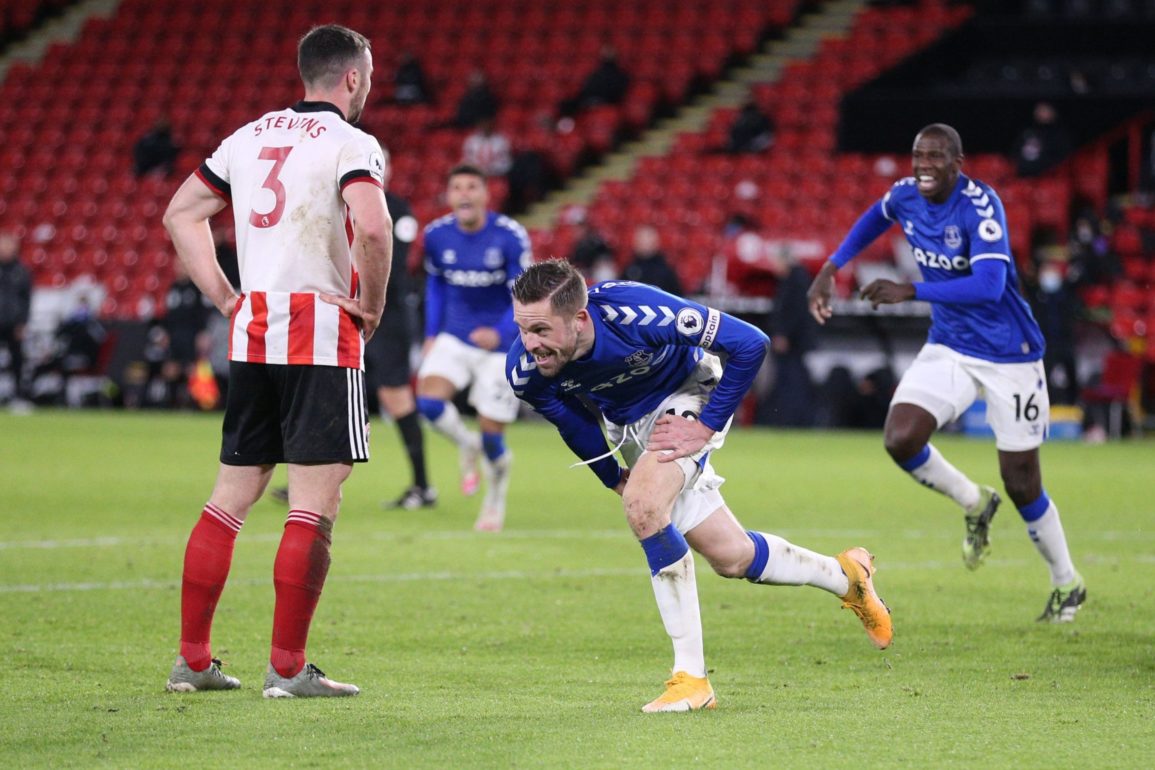 A tight game that Everton had the better of territorially was finally broken open with ten minutes to play as Icelander Gylfi Sigurdsson stayed cool to find the bottom corner and win the points to send the Blues up to second place.

After the disappointing exit from the Carabao Cup, it was back to Premier League action for the Blues on Boxing Day with a trip across the Pennine hills to the badlands of South Yorkshire to take on the massively struggling Sheffield United, and in the knowledge that a win would see second place in the table reclaimed.

Blades boss Chris Wilder has endeared himself to many by inadvertently winding Klippetty Klopp into a right owld lather over the non-use of five substitutes, so for that we doff our caps and thank him.

The hosts, after an impressive season last year on their return to the ‘top table’, are suffering badly from second season syndrome having taken just two points from their opening 14 fixtures to leave them rooted at the bottom of the table, and are the only club in the league without a win. And heading into this crunch fixture, Wilder had a number of selection issues to contend with, not least being the suspension of midfielder and former Blue John Lundstram, and injuries to record signing Sander Berge and forwards Oli McBurnie and Lys Mousset.

Speaking about the injuries his squad have incurred, Wilder admitted to being dismayed that, “From my point of view and I’ve told the players, I just want somebody to grab the shirt and say ‘it’s mine’ and not let go of it. I think the criticism of the players from me is that not enough of them have done that this season, there’s not been enough of players taking the shirt and making themselves a definite selection. Whoever train well and plays well, I’m not going to leave them out and now is the time for them to hit the level of form I expect of them, that they’ve shown in the past and they should expect of themselves.”

On the Boxing Day opponents, Wilder commented, “They’re a huge club, always in the top ten and keep adding quality players; an established Premier League club who’ve attracted one of the best managers in world football. He’s not gone there to mess about, they had a fabulous start, lost a couple of games and they’ve come roaring back. We need to put in a big performance to get a result from this game.”

Looking to bounce back from the cup exit and strengthen claims for a top four place heading into the New Year, the major concern for Carlo Ancelotti and Everton was over Brazilian forward Richarlison and whether would recover from the nasty knock and possible concussion he took from colliding with Eric Bailly thanks to the dangerous push from the snide Bruno Fernandes on Wednesday night. The boss also had to think about returning to the all centre halves back four that has done so well in the last three PL outings but, ruled out a return for James Rodriguez until possibly the game against West Ham on New Years Day.

In the injuries he noted, “If he [Richarlison] has a concussion, he has to stay out, we have to follow the protocols and we have to be able to replace him better than when he was not here [before]. Also, for the next two games James will not be available. If Richarlison is not there it will be a great opportunity for the players that didn’t play a lot, and for this game they can show their qualities.”

On facing a side still looking for their first win of the campaign, Carlo observed, “We have to be able to recover the energy that we need to play against Sheffield United because it will be a tough match, an important match and we want to keep the position in the league that is a good position. Sheffield United did a fantastic game against Brighton. Also, because they were with 10 men, they performed really well. It will be an important game. They need the points, we need the points – all the teams need the points. As usual, it will be a tough game because the Premier League is like this. Every game you have to fight to have a result.”

Entrusted with keeping order at a blustery, cool and raining Bramall Lane was referee David Coote.

A heavy pass from Gordon presented the Blades with an early corner that the Blues defended easily enough to get forward pressing higher up the pitch and noticeably quicker than last time out. Everton looking comfortable in possession in the opening exchanges before a cross from Iwobi was too long for DCL but won a corner as Ampadu took no chances – Ramsdale claimed the set piece and looked to get his side moving quickly.

A scare for the Blues on the quarter hour as McGoldrick was found in the Everton area and he rounded Pickford to slide the ball towards goal, Ben Godfrey getting back to cover as the offside flag was raised. Everton were enjoying more of the ball without putting the home side under any real pressure. DCL took a tumble under a good tackle from Egan as the Blues looked to get the leading scorer into the game as Sigurdsson found Iwobi and he fired in a powerful shot that Ramsdale held well.

The rain was still coming down heavily making as Michael Keane made two telling headers to clear a cross from Stevens as the home side made space wide right for him to try and exploit. Twenty-five minutes gone and the game hadn’t come to life, the home side huffing and puffing with Everton looking slightly better on the ball. A long ball from Keane saw DCL climb to win it on his chest and then crash an instant volley just wide of the far post – best chance of the game so far by a country mile.

Ramsdale spilled a free kick from Sigurdsson and was somewhat fortunate to deflect a shot from Godfrey into the legs of Mina, and Robinson cleared the danger while he recovered his line. Everton were still having lots of the ball without finding the killer pass or pace to trouble the Blades rearguard. An excellent jinking run from Iwobi saw him beat three players and unable to get a shot away, he fed Gordon who was quickly closed down and the opportunity was lost.

Sigurdsson, found by Gordon cutting in off the left flank, bent a long range shot wide of the far post – Everton making chances but needing to hit the target. Davies with a lofted ball down the middle was just too strong for DCL who again, was running himself into the ground looking to cause trouble and get on the scoresheet. Approaching the interval, a foul by Davies on Brewster gave the home side anotger half chance as Burke managed to wriggle away from Doucoure to try and bend the ball beyond Pickford into the far corner, the ball going wide.

McBurnie replaced Burke for the Blades to start the second half, no changes by Carlo Ancelotti as the Blues attacked the end of Bramall Lane where travelling fans would, in normal times, have been encamped in numbers.

DCL picked up a needless booking for knocking the ball away after being penalised for a push, ahead of Davies having his ankles taken by McGoldrick. Everton made an early change with Bernard replacing Anthony Gordon with only ten minutes of the second half played. Another nervy moment for the Blues as Sheffield got forward in numbers and McBurnie went down in the area, VAR looked at it, no penalty ensued.

Everton worked the ball out to Holgate to win a corner with a cross being booted behind, Sigurdsson to the near post with the set piece for Holgate to flick on, DCL unable to get to it. An hour gone and this game was looking like one moment of divine intervention or a mistake could prove crucial.

A decent attack down the left involving Sigurdsson, Bernard and Godfrey ended disappointingly with Holgate blazing a shot high and wide. Norwood replaced McGoldrick as the Blades second change. Sigurdsson chipped a free kick too long for Yerry Mina and Seamus Coleman came on to give Michael Keane an early finish on 65 minutes.

Davies with a good tackle set Everton moving forward for Coleman to find Sigurdsson, his cross into the box cleared easily by the home side. Bernard was brought down by Norwood as he looked to break into the Sheffield half, and we hit the 70-minute mark with the game still crying out for some real quality and goalscoring opportunity. Baldock was booked from bringing down Ben Godfrey on a charge, Sigurdsson again putting the free kick straight into the goalies hands, chance wasted. Ramsdale spilled a cross from Coleman but with no Blue nearby, had no trouble gathering the loose ball.

Andre Gomes was the final change for Everton replacing Tom Davies in the 74th minute hopefully to inject a moment of class and quality to unlock the Sheffield defence. Mousset replaced the blank firing ex-RS Brewster for the final quarter of an hour, so with both sides having made their three changes, could the deadlock be broken?

Iwobi and Doucoure broke away for Iwobi to cross to DCL to lay back for Bernard to see his shot blocked, Everton kept the pressure on with Coleman chipping the ball into the box where it fell to Bernard to find Doucoure for a deft touch on to Gylfi Sigurdsson and his shot across the face of Ramsdale arrowed into the far bottom corner.

Ten minutes to play and the Blues had the lead their possession deserved and a desperate Sheffield United tried to throw the literal kitchen sink at them in search of an equaliser. But it was the Blues who got forward, Gomes and Bernard releasing Godfrey into space on the left for a cross that DCL couldn’t reach and he was adjudged to have fouled a defender anyway.

Basham won a late corner off Godfrey who again had had an excellent game, Norwood putting it long where Stevens fired his shot way over the bar under pressure from Holgate. Bernard, Godfrey and Gomes getting forward ate up some valuable seconds, Godfrey then picking up a yellow card for delaying the game. Two good defensive headers from Mason Holgate in midfield prevented United getting going and more good work from Iwobi on the right used up more time in winning a late corner.

Five added minutes were signalled to give the home side a fillip of late hope. Everton put eleven men behind the ball with Bernard again helping the ball clear and then combining with Gomes to clear from the corner. Mousset forced another late corner from their left, Norwood swung it in but McBurnie couldn’t get to it under pressure from Mina.

McBurnie fired a late chance narrowly wide and that was that. It wasn’t pretty but, four wins from the last four games in the Premier League sees Everton as genuine challengers for a top four finish.