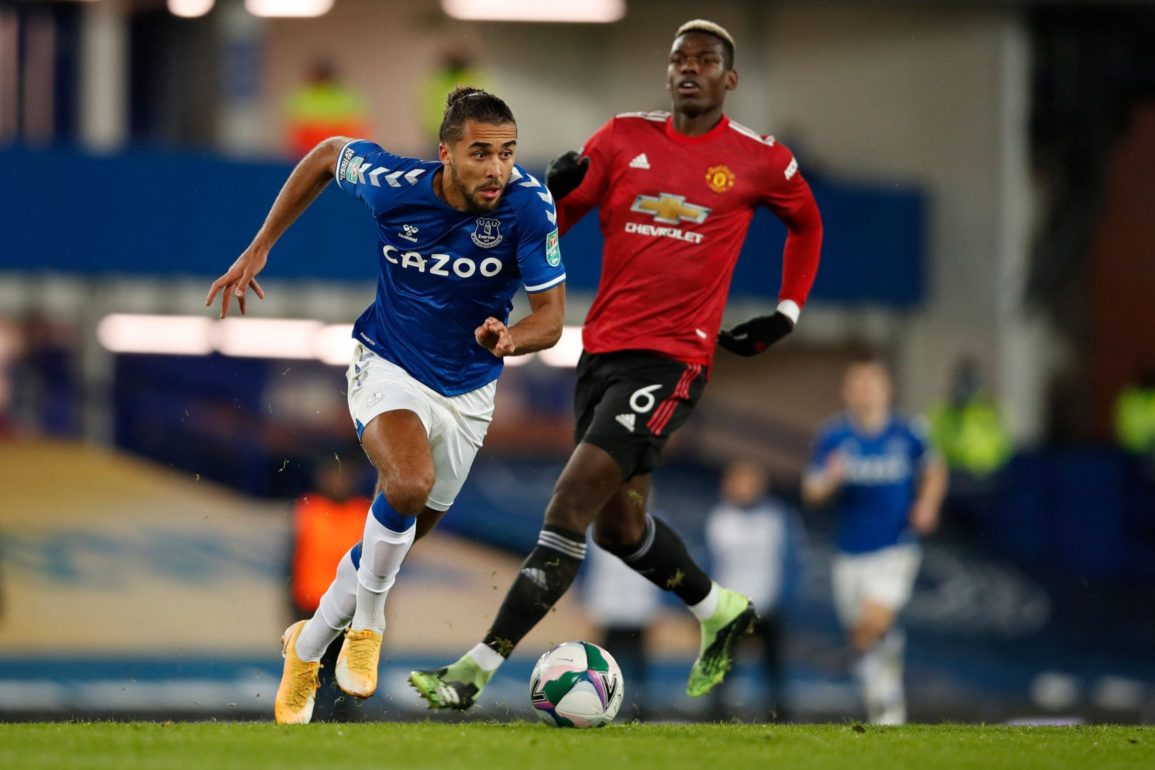 A late, late winner from Edison Cavani sent Manchester United into the final four of the Carabao Cup from a game that in all honesty, Everton were second best throughout. A disappointing end to the Blues cup run.

The fifth game in just eighteen days for the Mighty Blues, and arguably the most important game of the season to date, pitched a resurgent Everton against an equally resurgent Manchester United in the quarter-final of the Carabao Cup.

Three straight victories even without key players had lifted Everton into fourth place in the Premier League table for Christmas with the opposition narrowly ahead after a 6-2 demolition of Leeds, so Wednesday’s encounter had all the makings of a classic cup tie.

Reflecting after the victory over Arsenal, Blues boss Carlo Ancelotti said, “The project is quite clear – to compete as we are at this moment, it is a long season, we want to compete until the end and I think we can. I think we’re doing really well this season. We are in a good position in the table. We have shown in the past three games a lot of consistency and a lot of spirit, so you have to be pleased with what we are doing now. This was a great result in a difficult game. Arsenal played better than us in the second half, we were 2-1 up and wanted to defend properly. It is true we defended but the first half was good, and at the end of that half the score was fair. But we got the final result and this is the most important thing.”

Turning his attention to the cup challenge, in the first game of his second year in charge at Goodison, Ancelotti noted, “We are here [quarter-final] and want to fight for this, it is an important game in the quarter-final of an important competition Everton never won. We are not so far from achieving this [claiming silverware] and are in a good moment. But, we are going to play against a really tough opponent who beat us here a few weeks ago. It is a great opportunity to show the momentum we have.”

On fans being back in the Grand Old Lady, he added, “Also, because we are going to play against a strong opponent, if we can win, it will give us more confidence. The fact we are playing at Goodison Park can be an advantage, for sure. The past two home games [Chelsea and Arsenal]… the performance of the team was really good, partly because we had this support.”

For the opposition, manager Ole Gunnar Solskjaer who saw his side three semi-finals last season, noted, “We want to improve and we’re expected to win trophies. To improve on last year is to get to the final – and when you get there, there’s only one thing that matters: to lift the trophy. It’s really important we try to get our hands on silverware. We haven’t won in the last two or three years now and it’s important. We are desperate to get our hands on a trophy; these players are desperate to learn how to win.”

Midfielder Jesse Lingard, who hasn’t played since September, was available to return to the squad, while forward Mason Greenwood was also in contention for a recall. “Jesse’s been working hard in training,” added Solskjaer. “He’s been unfortunate with having to isolate a few times, been in contact, or close contact with Covid, not even having it himself. He’s been very unlucky being away from the training ground a few times. He works really hard and he’ll be involved in the squad, definitely. Mason’s fit to play. He was on the bench [against Leeds] – he’ll be involved in the squad unless something happens.”

With the final semi-final place up for grabs, overseeing events at a damp and cold Goodison Park was referee Andy Madley.

A quiet opening to the game saw United force two corners and Yerry Mina go off for treatment to a blow to the face. Pogba with a backheel set up vdBeek for a shot that was deflected behind, the Blues defence coming out quick to catch Cavani offside from the set piece.

The visitors has settled much the quicker and on the front foot forced Coleman into conceding another corner that Richarlison headed clear before Doucoure put a Telles cross behind for a fifth. Olsen nearly gave the ball away to Cavani, the Swede very lucky not to concede a giveaway goal. Tuanzebe dispossessed Godfrey to find Fernandes, his shot partially blocked and Olsen again a tad lucky to get to the loose ball before Cavani could control and shoot. An opening quarter hour that would not have pleased Carlo Ancelotti.

Cavani on the end of a cross from the left saw his point blank range shot hit Olsen as the visitors continued to dominate the game, Everton finally getting forward with Sigurdsson jinking into the United box for Maguire to block his shot. United were much more confident with their passing and another Fernandes ball into the box almost found Tuanzebe, Keane clearing in a hurry. A Telles cross from the left found Greenwood, his stooping header going across the face of goal and just wide of the far post.

Mina got a telling header to a Fernandes cross to concede yet another corner that Telles swung through the defence for Pogba to head straight at Olsen. Some good work by DCL, latching onto an errant ball from Fernandes, came to nothing as Iwobi looking for Doucoure saw his pass intercepted and the Frenchman having to give a free kick away.

Half an hour gone and the Blues were still looking a pale shadow of the side that have won three tough Premier League games on the bounce, the midfield simply not doing enough to put United under any pressure. Finally, on 34 minutes, Everton won their first corner off Matic, the ball from Sigurdsson finding the head of DCL but his effort went straight into the waiting hands of Henderson.

A good run from Godfrey saw his swap passes with Richarlison and Sigurdsson to get into the box where he took a tumble, but it was a vain attempt to win a penalty and United cleared. Everton won a free kick 25 yards out and Sigurdsson bent it over the wall only for Henderson to make an acrobatic leap to palm the ball behind for a corner that was played too strongly. Coleman won a third corner as Everton finally began to settle into the game, Maguire hoofing it clear ahead of Godfrey getting to a loose ball.

Sigurdsson tried a cheeky backheel, the ball rebounding to him off a United defender and the resulting shot having neither the power nor direction to trouble Henderson. At the other end Mina stretched well to deny Cavani getting on the end of a cross from Fernandes and when Gomes gave away a needless free kick, Olson had to go low to his left to save from Fernandes.

One added minute was signalled and at the break, Everton were probably grateful to still be on level terms.

As you were for the second half as neither manager made any changes. Doucoure won the ball off Pogba to release Richarlison but he lost possession as he gained the United area. At the other end, Cavani seemed to win the ball with his arm but won a corner that Mina defended well to clear and release Iwobi, his cross from the left was too long and strong for Sigurdsson to keep in play.

Mina and Cavani clashed in the centre circle, Mina going down and Cavani maybe a tad fortunate VAR wasn’t in operation as he’d clearly raised his hands into the face of the Columbian. Richarlison and Bailly both needed treatment after coming together after Fernandes snidely barged into the back of the Everton player who was helped from the field and taken to the dressing room and replaced by fellow Brazilian Bernard on 56 minutes.

The game was becoming a little fractious and Pogba saw the first yellow for a foul on the galloping Godfrey as Everton looked to counter attack down their left. Everton made a second change as Tom Davies replaced the sadly ineffective Andre Gomes, who continues to look less than 100% match fit.

An hour gone and this cup quarter final was delicately poised as Olsen made a good catch to a cross from the right by Cavani. Cavani again down the right fed Pogba to find Fernandes and he blazed his first time effort high over the bar as United continued to have slightly the better of the second half.

The visitors made a double change on 67 minutes with Martial and Rashford replacing vdBeek and Greenwood respectively. Coleman showed great determination to get passed Telles and gaining the United area his reverse pass for DCL saw the Blues number nine stray offside.

Into the final twenty minutes and with penalties looming unless either side could make the breakthrough, the home crowd were trying to lift the men in blue for a big finish but, some more defensive work from Keane and Godfrey was needed to clear a cross from Telles.

Neither side were now producing much of any real attacking quality, Godfrey stopping Cavani in his tracks and forcing the Uruguayan to retreat and go backwards. And the sloppy play continued with Bernard and then Pogba losing the ball cheaply, and Rashford completely failing to anticipate a through ball from Matic. Pogba went down theatrically on the edge of the box as Bernard protested his innocence over the challenge – Telles firing the free kick comfortably over the bar.

With less than seven minutes to go before the lottery of penalties, United made their final change, Shaw replacing Telles. Matic and Bailly closed the door on DCL as he tried to get on the end of a ball from Sigurdsson who’d dispossessed Maguire in midfield. Pogba and Fernandes worked the ball towards Martial but he made a hash of the chance and time continued to tick away.

Sigurdsson threw himself full length to try and get on the end of a cross from Iwobi, the ball going wide and United worked the ball forward through Maguire and Martial for Cavani to hit a powerful low shot from the corner of the area beyond the diving Olsen on 88 minutes.

Cenk Tosun replaced Doucoure for the final moments and Bernard was fouled by Tuanzebe just outside the area and was rightly booked – a late chance for the Blues to save the game. Sigurdsson sent it over and Godfrey climbed but couldn’t direct his header on target.

Five added minutes were announced and Everton won a corner as Tuanzebe blocked a Godfrey shot behind for a corner that Henderson held well under pressure from Coleman. Fernandes fed by Matic hit the crossbar and United sealed the win as an Everton counter broke down and Martial fed by Rashford slid home the second.

Vote for your Everton man of the match and get involved in the match discussion on GrandOldTeam’s forum!