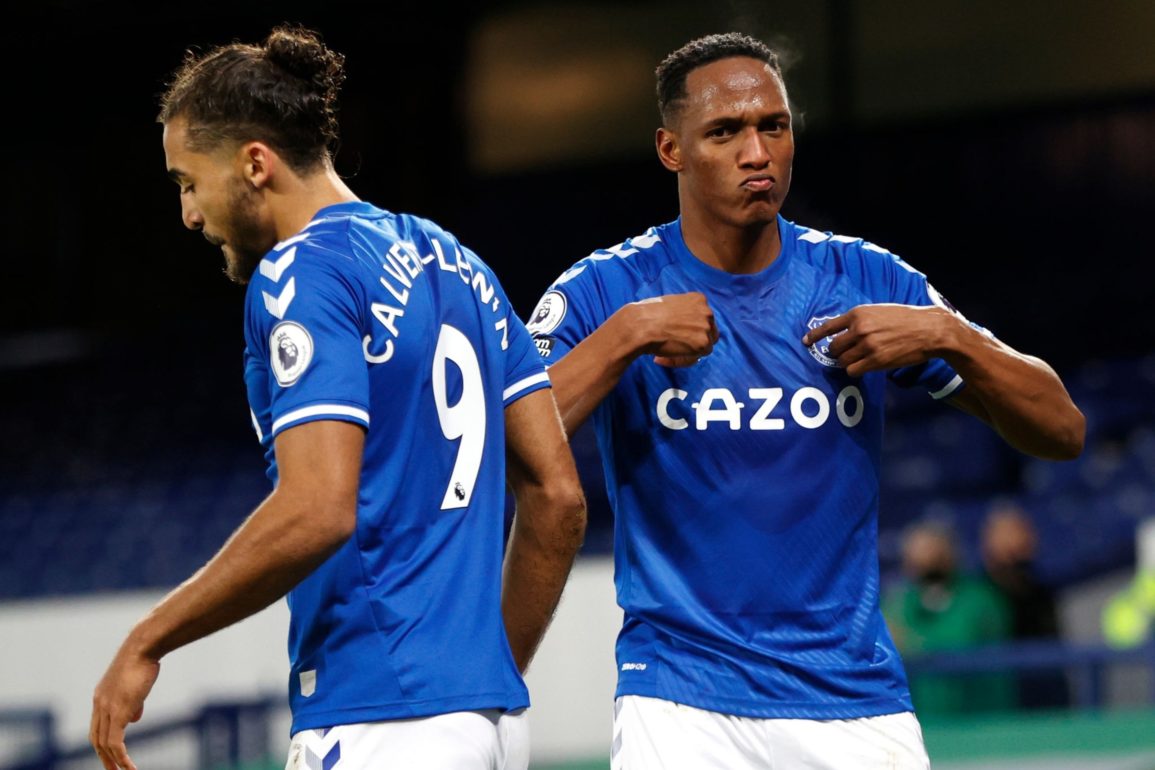 Everton moved up to second in the Premier League with a 2-1 victory over Arsenal at Goodison Park.

Everton took the lead when Dominic Calvert-Lewin‘s flicked header from Alex Iwobi‘s cross deflected off Gunners captain Rob Holding and into his own net on 22 minutes, but Arsenal levelled with Nicolas Pepe’s penalty after Tom Davies‘ foul on Ainsley Maitland-Niles on 35 minutes.

Rate each Everton players performance below.

It was another huge three points for Everton, who have guaranteed a spot in the Top 4 on Christmas Day for the first time since 2004/05. It’s now three consecutive victories for Carlo Ancelotti’s Toffees, who have won 4 of the last 6 in the Premier League despite the absences of James Rodriguez, Lucas Digne, Seamus Coleman, and now Allan. It’s safe to say that Everton’s season is back on track after a temporary dip in form and the Blues now face a tough home cup tie with Manchester United on Wednesday followed by a considerably easier boxing day match-up with bottom dwellers Sheffield United, who have made the worst start by any team in the English top-flight since 1888 before the Football League was founded. Everton opened the scoring against Arsenal when Calvert-Lewin’s off-target header deflected off Rob Holding and nestled into Leno’s net, but Arsenal equalized just over 10 minutes earlier when Tom Davies fouled Maitland-Niles in the box and Nicolas Pepe converted the subsequent spot-kick. However, it would be Everton who took the lead into halftime, as Yerry Mina rose to send a Sigurdsson corner-kick past Leno at the near post, and it would be enough for Everton to take all three points. Everton have now defeated every single top-flight club in London this season, beating Spurs, Chelsea, Arsenal, Palace, and Fulham in the league, as well as West Ham in the Carabao Cup. Carlo Ancelotti’s one-year anniversary as Everton manager was one to celebrate. Here are my player ratings for Everton 2-1 Arsenal.

It’s kind of mad how different our two keepers make you feel. Robin Olsen is a calming influence at the back and doesn’t make you worry at all. Jordan Pickford makes you on the verge of soiling your pants at any moment. So why is Pickford still starting? He has one of these moments every game, but since he’s currently getting away with them there are no consequences. Everton were desperately lucky not to concede a second-half equalizer when Pickford inexplicably tried to catch a cross under extreme pressure instead of assuredly punching the ball clear, and when he inevitably flapped at the ball, David Luiz volleyed the ball off the floor and up off the inside of the post. Can we please see Robin Olsen back soon?

Ben Godfrey’s performances at left-back continue to be absolutely outstanding, and he was spectacular yet again today. 6 recoveries, 4 interceptions, 4 clearances, 2 tackles won, and 89% pass accuracy from left-back while Everton were under the cosh for nearly the entire second half. It’s almost unbelievable how well he’s playing in a position he’s completely unfamiliar with. He is proving to be a simply sensational deadline day acquisition, and long may this rich vein of form continue! Man of the Match yet again for the young Englishman.

Everton’s big Colombian center half is unlucky to miss out on MOTM today. I thought he was very solid defensively, and of course, he scored what would be the winner with a glancing header in first-half stoppage time that Leno was unable to keep out. He and Micheal Keane continue to be colossal at the back every match. Mina is such a threat from set-pieces and so it was great to see him on the scoresheet for the second time this season. Hopefully, there will be many more to come this season. Fun fact: Yerry Mina’s last 4 goals have all come in the 45th minute, which is the first time a player has scored four consecutive goals in the same minute since 2011. Yerry Christmas everyone!

Michael Keane has come out of nowhere to become a top quality Premier League center back under Carlo Ancelotti. He won a further 5 clearances, 3 aerial duels, and 2 tackles today. Everton conceded 0 shots on target in the second half for the third consecutive game, which is an incredibly impressive figure considering all three of those halves saw Everton defending leads. Micheal Keane’s resurgence has been incredible in the past year or so, and he is certainly one of the most in-form defenders in the entire league.

Mason Holgate certainly doesn’t have the attacking quality of a marauding full-back like Seamus Coleman, and that was apparent today, but he put in yet another defensive shift for the Toffees. His numbers were the least impressive of the backline, with just 1 aerial win and 1 tackle, but he was up and down the pitch and put in the hard yards for the team. It may be harsh to give him a 6.5, but I don’t think he really did anything to merit a score as high as his defensive partners.

As I predicted after the Leicester match, the defensive responsibilities left behind by Allan were a bit too much for Abdoulay Doucoure today. He was not able to stamp his impact on the game to anywhere near the same degree as he did on Wednesday and the reckless presence of Tom Davies next to him probably did not help with that. After today’s match, I hope Carlo Ancelotti recognizes that Doucoure can’t shoulder all the defensive responsibilities himself and that he needs a more solid midfield partner next to him going forward. Whether that could be Holgate or Godfrey is yet to be seen, but hopefully, it will be Gbamin or a recovered Allan sooner than later.

It was such an encouraging start for academy graduate Tom Davies today, but he let his performance levels massively drop after Everton’s opening goal. In the first 20 minutes or so, he was regaining possession all across the midfield and made quite a few tackles and recoveries. However, he seemed to go missing after Rob Holding’s own-goal and but he, unfortunately, re-appeared when he gave away a horrifically stupid penalty kick with a clumsy kick on Ainsley Maitland-Niles. In the second half, Davies was almost entirely absent, and I don’t remember his name being called during the final 45 minutes at all. Everton did not have any central midfielders on the bench due to Andre Gomes missing out due to tightness, and so there wasn’t much that Carlo could do about Davies’ alarming final 70 minutes of the game.

Gylfi Sigurdsson wasn’t bad today at all, and he had a few nice passes and through balls. He had the assist on Yerry Mina’s header, which is unsurprising considering the quality of his corner deliveries as of late. However, his shooting from set-pieces continues to be abysmal, as he still hasn’t scored a free-kick for Everton in 113 competitive appearances. He had a golden chance from about 21 yards or so in the first half, but instead of delicately floating the ball over the wall and back under the bar past a hopeless Leno, he idiotically slammed the ball straight into the wall with the entirely wrong technique for such an opportunity. I was very frustrated at that moment. He has been playing much better in the 10 than in any other position he’s been forced into over the past season or so, but he needs to offer more than just quality crosses from corner-kicks and half-hearted pressing to retain his spot when James Rodriguez imminently returns from injury.

It was great to see another “assist” from Alex Iwobi today, who swung in an inch-perfect cross that led to the Holding OG in the 22nd minute. Otherwise, his delivery was a bit disappointing. He was crowded out of large parts of the game, as he seemed to always have 2 defenders shepherding him and forcing him to try and cross the ball from unadvantageous positions. Even so, Iwobi is certainly Everton’s best option at right-wing at the moment, and I hope we see him keep his spot there when James returns and hopefully replaces Sigurdsson in the midfield.

It didn’t quite come together for Richarlison today going forward, but as always, he covered a ton of ground and put in a shift up and down the pitch. It’s fantastic to have a player that guarantees you that every game. I would’ve hoped that the Brazilian could have offered more of a threat on the counter-attack, but other than a few forays forward in the second half, he didn’t have much influence on any of Everton’s best chances. He didn’t have much service today to be fair, but hopefully, that will improve in games going forward when Everton have more of the ball, especially in the second half.

It’s a third consecutive game without a goal for Dominic Calvert-Lewin, but that is misleading in regards to the form he is in. It’s a third consecutive game where he has been majorly responsible for or involved in an Everton goal but just hasn’t been the one to get the final touch. He met Alex Iwobi’s curling cross in the 22nd minute and would have seen his header go wide if it weren’t for the thigh of Rob Holding which took his ball past the onlooking Bernt Leno. He was very isolated for most of the game, but still managed to win some flick-ons and get involved in nice link-up play with Richarlison and Iwobi on the counter. Despite falling back in the Golden Boot race, DCL’s form and influence certainly haven’t dipped, as he continues the best season of his career.

It was great to see Everton’s club captain back today, although it was determined that taking the risk to put him in the starting XI today wasn’t worth it. Hopefully, we will see him donning the armband for a full 90 minutes soon, and it will certainly be great to have his leadership and character back in the side.

That one passage of play Kenny had at the end of the game was great work, but it was yet another cameo appearance at the closing stage of a big win.

Should I even bother? His biggest contribution to the game was the fact his substitution added an extra minute to second-half stoppage time.