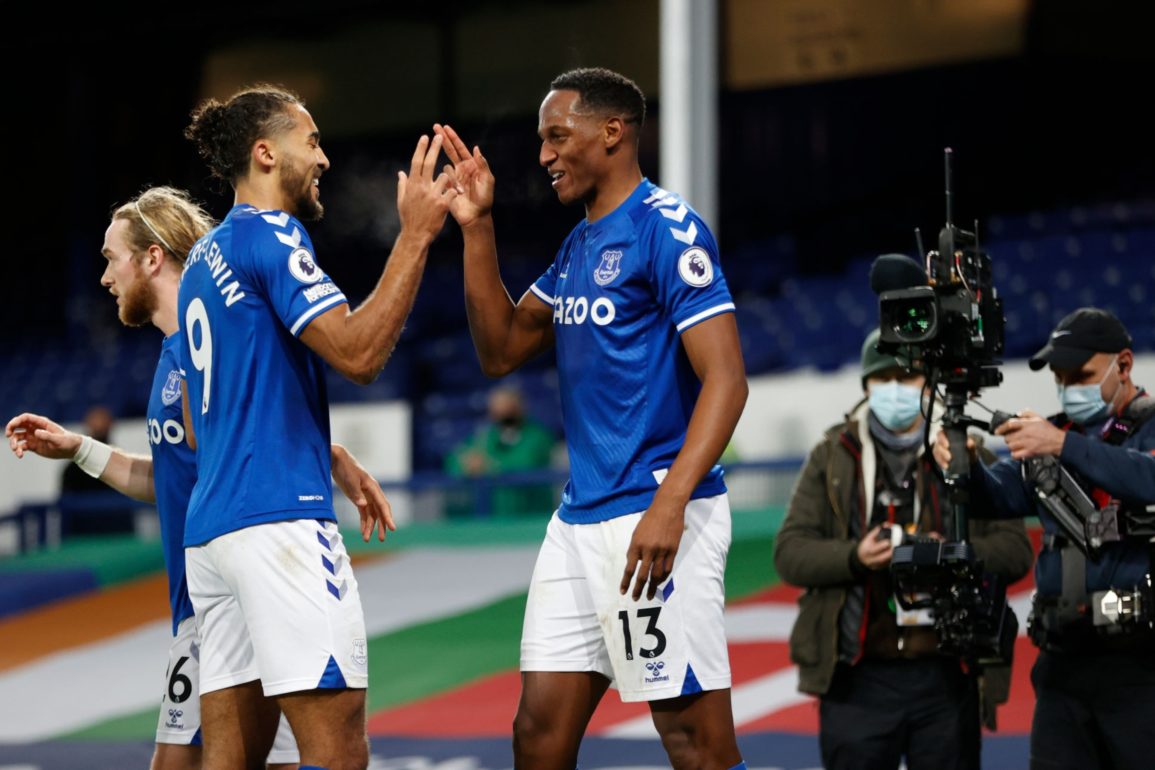 Three from three sends Blues up to second.

Everton made it three wins from three in December and in so doing climbed to second place in the Premier League table in a game that was far from a classic and won by a fine Yerry Mina header.

Victories over Chelsea and Leicester, achieved with grit and determination in spite of the absence of key players, saw Everton welcome Arsenal to Goodison Park with Blues fans in good heart. Another two thousand lucky souls relished the opportunity to get behind a team that has confounded pundits and journalists with the nature of two clean sheets, two wins and two highly fancied opponents put back in their boxes. Two results that have re-kindled hopes of qualifying European football this season.

Victory at Leicester on Wednesday evening came at the price as Brazilian midfielder Allan suffered a hamstring injury that saw him join Lucas Digne, Fabian Delph and J-P Gbamin on the ‘not sure when they’ll be ready to play’ list. In his Friday press briefing, manager Carlo Ancelotti did impart some encouraging news as he advised, “Seamus Coleman is available. Seamus has a strong desire to play. He is a fantastic captain for us and it is really important he is back. James is not ready yet. I think it is too soon to put him at risk. He is working and I hope he can be ready for the game against United. Fabian Delph is doing individual treatment. It is too soon to talk about how long it will be before he comes back.”

Returning to the form showed and the impetus gained from beating Chelsea and Leicester, The Don noted pointedly, “We have progressed. The position in the table is good now compared to when I arrived but we need another six months to reach our target which is to reach a European position. The top of the table is really compressed. We don’t want to look too far. At this moment we have an important game against Arsenal, who are a strong team, and we prepare to do our best. Our momentum is good and we want to keep this.”

A point at the Emirates against high-flying Southampton on Wednesday gave Gunners boss and former Blues favourite Mikel Arteta some welcome respite after a run of disappointing results that have seen Arsenal record just one win in their last nine outings.

Arteta, like Ancelotti, had selection problems to deal with, primarily as summer signing Gabriel and loose cannon Granit Xhaka were both suspended for the Goodison trip following red cards in their most recent games. The north London club were somewhat guarded in confirming injury concerns although their official website listed defender David Luiz as doubtful with a head injury from the game against Wolves; summer signing Thomas Partey with a thigh strain and Brazilian forward Gabriel Martinelli improving but still not ready for a first team return.

Addressing his media gathering the best little Spaniard we used to know commented on the draw with Southampton, “We had a disappointment of not winning the game, but at the same time I think the players realise that with the difficulty of playing 35 minutes with 10 men, a draw was probably a result we had to take.”

And on facing a resurgent Everton and his time as a Blue, he said, “It is always really tough to go to Goodison, I played there and know them really well. They are a team in two different moments but we are preparing to go there and beat them, because we need a result. I had seven incredible years there, they treated me incredibly well, and I still have a lot of love, admiration and friends there because I am grateful they treated me really well. I really enjoyed being part of their family.”

Languishing in the bottom half of the table, Arteta entrusted the task to this starting line-up: Leno, Holding (c), Luiz, Tierney, Maitland-Niles, Elney, Ceballos, Saka, Pepe, Nketiah and Willian.

Holgate spread an early ball wide left for Richarlison who exchanged a couple of passes with Sigurdsson before the Icelander overhit his cross. Good possession by the Blues saw them happy to knock the ball around looking for the opening to hurt the visitors before a foul by Davies gave Arsenal a free kick. Excellent work a the back by Richarlison launched an Everton attack that came to nothing, but it was great to see the commitment of Richarlison to play at both ends of the pitch.

A fairly steady opening ten minutes saw the Blues enjoy more of the ball, Nketiah making the best run for the visitors before Michael Keane cleared his cross comfortably. Sigurdsson was hurt by a challenge in midfield but, picked himself up to carry on with a bit of a limp. Davies to Michael Keane and the England centre back strode forward purposefully to fire in a long range shot that curled away from the target. Pickford claimed a high cross from Tierney confidently, his first handling of the ball on 16 minutes. And the Everton dominance of possession led to the opening goal on 21 minutes, Tom Davies getting forward to find Iwobi and his cross was met by the head of Dominic Calvert-Lewin, but beating Leno with a big deflection off Holding for it to be officially recorded as an own goal.

Arsenal tried to respond as Tierney got forward down their left to find Nketiah who snatched at his shot and sent it wide across the face of goal. Tierney to Saka saw Arsenal win a corner off Mina, DCL with a clearing header, eventually leading to Ben Godfrey making a full-blooded challenge on Ceballos saw the visitors win a second corner that Mina headed clear.

Tom Davies was enjoying his chance to shine, taking up the Allan role, winning tackles and setting the tone with good movement and passing to bring others into the game, as shown by him feeding Godfrey to break, find Sigurdsson and onto Richarlison whose cross was headed clear, but another promising move from the Blues.

Disappointingly when a clearing header from Mina fell toward Maitland-Niles, it was Davies who made contact with the Arsenal player and referee Marriner instantly blew for the penalty – Pepe sending Pickford the wrong way in stroking home the 35th minute equaliser.

Tierney was the second Arsenal booking when he clattered into DCL to give the Blues a free kick, almost dead centre just outside the penalty area – Sigurdsson hitting the wall and poking the rebound effort well wide of the target. The last five minutes of the half saw Arsenal looking more confident, another effort from Nketiah being partially blocked on its way through to Pickford.

Everton responded with Holgate finding DCL and he turned away from his marker to curl a powerful shot that Leno tipped away for a corner. Gylfi Sigurdsson fired the set piece to the near post where Yerry Mina rose well to plant a perfectly placed header that Leno couldn’t keep out to give the Blues the half time lead.

No changes by either manager for the second half with Everton attacking the populated Gwladys Street. A promising break started by Iwobi and involving Sigurdsson and Richarlison came to nothing as the eventual cross from Iwobi was far too close to Leno. Nketiah was looking to cause problems down the right but twice in quick succession, Michael Keane snuffed out his threat.

Tierney offered a threat down the left and put into space by Willian created a chance for Saka and then won a corner off Holgate. Pickford didn’t hold a speculative cross and it fell to Luiz, his shot deflected onto the woodwork and hastily cleared by Alex Iwobi. The visitors were playing with some spirit and Everton needed to stay alert, Keane again heading clear from another Tierney cross before DCL drew a foul from Holding to break the Arsenal rhythm. Richarlison then brought down Ceballos to give Arsenal a free kick wide right, Saka went for goal and put his effort well over the bar.

Approaching the hour mark, Everton needed to re-impose themselves on the game, win some tackles and retain some possession to take the game to Arsenal. When Davies robbed Pepe, Ben Godfrey was off down the left flank at full speed, his cross going just behind DCL. A great leap by DCL to flick on a long ball from Pickford for Richarlison saw the Brazilian gain the area before unselfishly looking to feed Iwobi, Arsenal clearing in a hurry.

Arsenal made the first change, the anonymous Elneny replaced by Willock on 64 minutes. Arsenal were still looking to force the pace but, finding Everton stubborn defensively and seemingly happy to soak up the pressure and hit back on the counter attack. A second Gunners change on 71 minutes saw Martinelli replace Pepe to give them more of a goal threat.

Into the last quarter of an hour and Arsenal were still dominating the possession and made their final change with Lacazette replacing Nketiah. A Sigurdsson free kick to the back post was just too strong for Michael Keane as Everton got forward for a rare second half chance. Maitland-Niles did well to concede a corner from Richarlison after he’d been found with a peach of a through ball from DCL. From the set piece, the ball came out to Alex Iwobi and his shot was deflected out for a corner from the right, that was delayed due to Luiz whinging about Holgate standing in front of Leno, the corner coming to nothing.

Seamus Coleman made his return in the 83rd minute, replacing Alex Iwobi, to add a bit more to the rearguard for the dying minutes. Willock climbed well to reach a cross from Saka on the right only for his header to slide wide of the target as the visitors continued to force the pace with time running out.

Everton won a late corner to eat up some valuable time, Sigurdsson and DCL playing it short to use up more seconds ahead of five added minutes being announced. Godfrey at full speed was upended by Willock who picked up a yellow card for his troubles and the Blues made a double chance, Jonjoe Kenny and Cenk Tosun making cameo appearances for Richarlison and DCL respectively, DCL picking up a yellow card for delaying the change.

Tierney with a late chance saw Jordan Pickford make a good save, and the Blues held on to climb into second place at Christmas.

Vote for your Everton man of the match and get involved in the match discussion on GrandOldTeam’s forum!