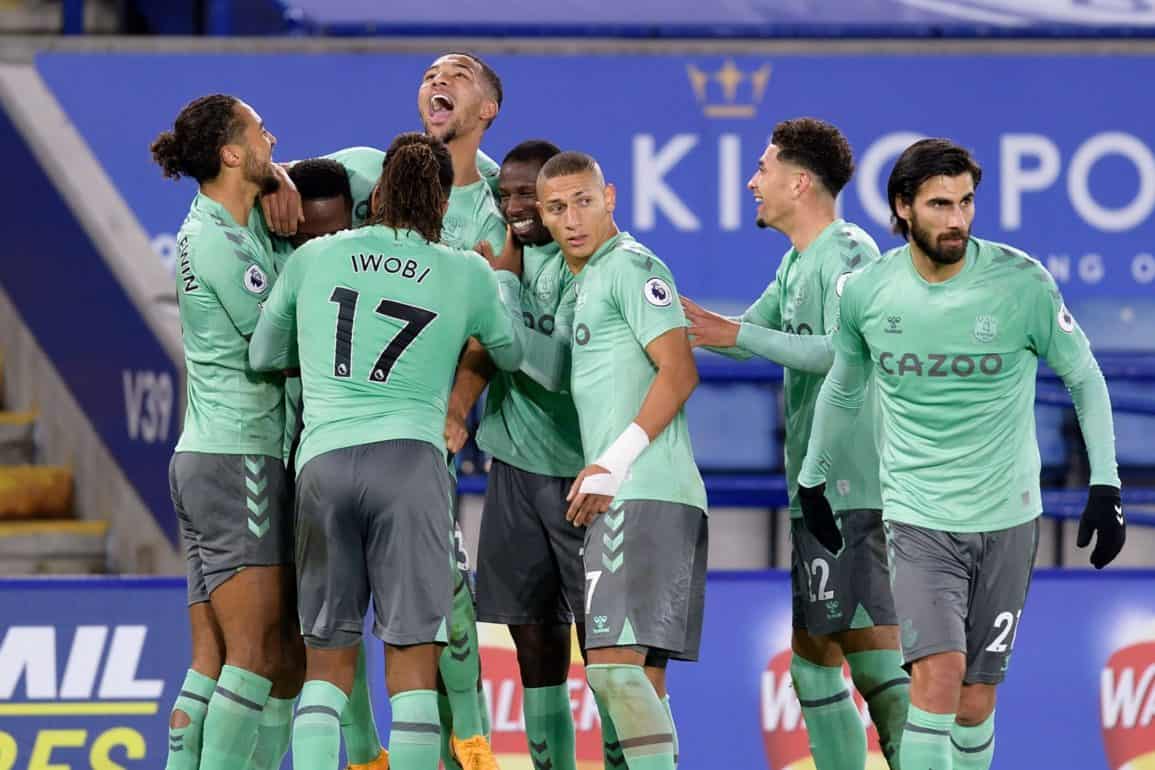 Goals from Richarlison and Mason Holgate secure a big 2-0 victory at The King Power Stadium.

Everton took the lead on 21 minutes when Richarlison cut in from the left and unleashed a powerful right-footed drive from the edge of the area beating Kasper Schmeichel.

Mason Holgate made it 2-0 on 72 minutes, stabbing home a rebound after Schmeichel made a fine double-save.

Rate each Everton players performance below.

It was another massive victory for Everton who took down European rivals Leicester City on the road for the second time in three years. The scoring was opened by Richarlison, who picked up his first goal from open play in the Premier League this season, and then the result was sealed in the second half thanks to Mason Holgate’s first Premier League goal. Everton were incredibly solid defensively, keeping another clean sheet against a squad with last season’s Golden Boot winner and the second-most goals scored in the league entering the game. After failing to keep a single clean sheet in the 10 games after the 1-0 away win against Tottenham on the opening day of the season, Everton have now kept two clean sheets in a row for only the second time under Carlo Ancelotti, the first time being the first two games of “Project Restart”. Everton now sit 5th on 23 points, just one behind 3rd place Southampton and 3 behind top spot in the league. Carlo Ancelotti’s men have returned to their early-season form which they failed to replicate after the Merseyside Derby, and now look to carry their momentum into their matchup with Arsenal on Saturday and a Carabao Cup Quarterfinal meeting with Manchester United in a week’s time. Here are my player ratings for Leicester 0-2 Everton.

The biggest pre-match shock today was the inclusion of Robin Olsen, meaning Jordan Pickford was dropped to the bench. Ancelotti claims it was simply rotation, just like he did for the Newcastle game. Olsen didn’t have too much to do really, but comfortably saved Jamie Vardy’s point-blank header that was powered right at him. He did not mess around at the back and got plenty behind all of his clearances and long balls. Overall, I think from his two appearances thus far he has proven to be a solid back-up option and a shrewd deadline day loan signing for Everton.

Ben Godfrey continues to impress playing at left-back. Although Lucas Digne’s attacking abilities are definitely missed while he is out with an ankle injury, Everton haven’t needed him defensively, as Ben Godfrey has slotted in brilliantly and has played a big part in keeping consecutive clean sheets against two Top 6 clubs. Godfrey was very sound again today and barely gave Cengiz Under a sniff down Leicester’s right side. It’s so far so good for Godfrey at left-back, and unless Carlo calls on him to step into the midfield in Allan’s absence, I expect him to keep that spot in the starting XI until Digne’s return.

It was another impressive display for Yerry Mina, who has now put in two consecutive performances of this caliber for the first time this season. Other than one headed chance that Olsen comfortably saved, Jamie Vardy did not have a sniff all game long and the tight marking of Yerry Mina was a big factor in that. I think that Mina could have been more impactful from attacking set-pieces, however, as Everton had a huge height advantage across the whole pitch, but in the end, it was Michael Keane who rose to head the initial effort that after a few saves from Kaspar Schmeichel was finally turned home by Mason Holgate. Overall, a job well done from Yerry Mina, and I hope he can keep defending in this manner for the months to come.

I thought Michael Keane was excellent tonight. He made a variety of blocks, especially on Vardy, and massively helped to essentially nullify the reigning Golden Boot winner. He also rose the highest on that second-half corner and headed an effort on goal which Schmeichel saved, but it fell to Calvert-Lewin, who’s effort was then saved onto the bar. Fortunately for Everton, Schmeichel didn’t get lucky for a third time, as Mason Holgate turned it home. That whole sequence was started by Big Mick Kegger’s leap and effort on target. Keane has just played potentially his two best games in an Everton shirt within 4 days of each other, and he is staking his claim to be in Ancelotti’s XI every week for the rest of the season, even when Holgate and Godfrey won’t be required to play as fullbacks.

Today Mason Holgate scored his first goal in 69 Premier League appearances, which was a lovely reward for another great display playing at right-back. Although he did get beat a few times by the very lively Harvey Barnes, I thought he defended soundly overall and helped restrict Leicester from crossing into the area. He was also instrumental in limiting Leciester to just two shots on target across the entire match. Mason Holgate’s experience playing right-back both for Everton and West Brom has been apparent since he assumed the position, and he will be very unlucky to be replaced by Seamus Coleman on Saturday if that is the decision Ancelotti makes.

Allan, as usual, was all over the pitch before his unfortunate injury in the closing stages of the first half. He has had a huge impact on this Everton team, and I don’t even want to imagine what Everton’s defensive numbers would look like without him this season. In the 40th minute, he pulled up during a recovery sprint down Everton’s left-hand side and seemed to do significant damage to his hamstring. He immediately waved to the bench and called for a sub, and was eventually stretchered off. Weirdly enough, he got out of the stretcher and gingerly walked down the tunnel on his own power. Hopefully, he won’t be out for too long, but the imminent return of Jean-Phillipe Gbamin could be a big boost for Everton to help negate some of the negatives of Allan’s injury. The Ivorian probably won’t be ready for the next few games, however, so I wouldn’t be surprised to see Mason Holgate slot into midfield upon the return of Seamus Coleman to the lineup.

Abdoulay Doucoure was having a solid game before Allan’s injury, but afterward, he truly took the game by the scruff of the neck. When Andre Gomes was subbed on to replace the diminutive Brazilian, all Evertonians were fearing that the Toffees would be very defensively vulnerable, but the big Frenchman did an absolutely superb job filling in defensively. He also totally dictated play from holding midfield having the most touches (60), most passes completed (43), most ball recoveries (13), and most interceptions (2) of any player on the pitch. Couple that with a 100% take-on completed rate and a 100% tackle success rate, and it’s clear to see that Abdoulay Doucoure is most certainly the Man of the Match and that this was his best performance in an Everton shirt by far. What a sensational performance.

Although he wasn’t a standout performer like he was on Saturday, it was another solid performance from Gylfi Sigurdsson. He did not have a huge impact on the game, but he worked hard in the press yet again and fashioned a few good through balls. I thought he played decently enough and is proving that he can be useful as the 10 in a 4231, but is essentially useless anywhere else as we have learned over the past season and a half or so.

It was about time Richarlison got a bit of luck in front of goal, and that came in the 21st minute when he dropped his shoulder and cut inside of James Justin onto his right foot to strike from about 20 yards, and Kaspar Schmeichel was unable to keep his low driven shot from finding the bottom right-hand corner. On top of finding what would be the winning goal, he worked his socks off yet again and was being kicked left, right, and center for seemingly the entire match. I think it took about 5 clear fouls for Lee Mason to finally award one in favor of the Brazilian, but it was a vintage performance from him anyway. He proved again to be a defensive asset just as much as an offensive one as he leads all Premier League forwards in tackles despite being suspended for 3 games. It was great to see Richarlison back close to his best, and I expect his to continue finding the net from now on.

Iwobi continues to impress during his first consistent run of starts since moving to Everton. His ability on the ball is more than apparent, and he was the one who provided the assist for Richarlison’s winning goal. He cut in from the right well and was giving Fuchs a lot of trouble before Carlo Ancelotti gave the order for him and Richarlison to switch sides. I don’t think he was quite as involved in the second half, but he was composed on the ball and carried it out of the Everton defensive third well to relieve some of the pressure Leicester were putting on the backline.

I think this may have been Dominic Calvert-Lewin’s worst performance of the season, which is saying something because it’s not like he played particularly poorly today. I just don’t think he was involved very much due to the nature of the game, but also because he was unable to hold up the ball against Fofana and Ndidi. He also somehow had his effort from 4 yards saved by Kaspar Schmeichel but had his blushes spared by Mason Holgate, but you’d really expect him to be putting the ball in the net in the first place. Despite that, Calvert-Lewin still leads the Golden Boot race, and I’d be shocked if he is held off the scoresheet for a third consecutive game when Everton take on Arsenal at Goodison Park on Saturday.

Although he was calm on the ball and sprayed some good lofted balls across the pitch, it was clear to see that Abdoulay Doucoure’s incredible performance salvaged what was a poor defensive display from Andre Gomes. He was getting beaten in 1v1 scenarios far too much in the heart of midfield and nearly gave away a penalty in the second half that was rightfully overturned by VAR. Although it was revoked, that scenario was all too familiar, as Gomes let a player get the wrong side of him in a defensive situation and had to make a risky challenge from behind. This time he got away with it, but he won’t be so fortunate in the future. On the ball, however, I thought Gomes had a good game, but in a match where Everton only have 39% possession, his defensive performance is much more important, and that wasn’t up to scratch.

It was nice to see Anthony Gordon play today, although for such a short amount of time. I obviously won’t be grading him today, but I still think he could be a major part of Everton’s future.

I’m not sure if Jonjoe Kenny had a touch, to be honest. He once again was a last-minute substitute called on by Carlo to see out a win.