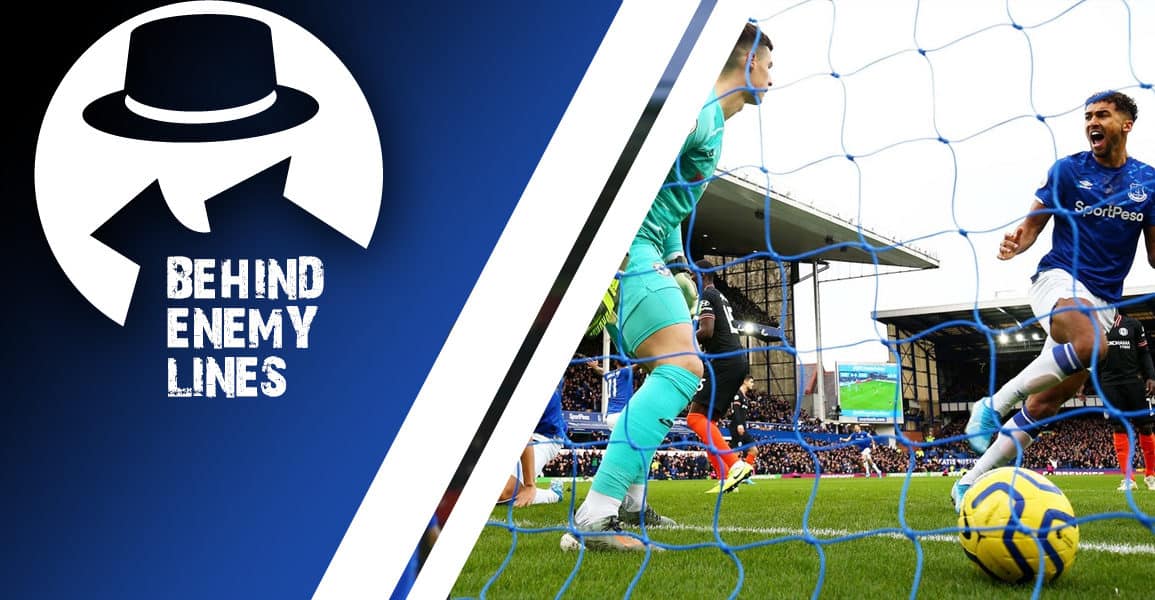 Everton’s skid down the table continued after a disappointing 1-1 draw at Turf Moor in a game that Everton really should have won. The Toffees have now slid all the way down to 9th, with 17 points from 11 games. Now they face by far the toughest month of their season, with consecutive games against Chelsea, Leicester, and Arsenal, followed by a Carabao Cup Quarter Final against Manchester United, Sheffield United on Boxing Day, and Manchester City just two days later. This incredibly congested list of very difficult fixtures will have to be traversed without Lucas Digne, who will be out for 2-3 months after undergoing successful surgery on his ankle.

Everton’s first test of the Holiday Season comes on Saturday at home, where 2,000 fans will finally return to Goodison Park for a matchup against Chelsea. Everton have actually won this fixture two years in a row, including last year when Duncan Ferguson led the Toffees to a 3-1 win off the back of Marco Silva’s sacking. This year, however, it seems to be a tougher task. Chelsea are in a very good run of form and have real star-power with the likes of Timo Werner, Christian Pulisic, Kai Havertz, Ben Chilwell, and more. They spent a huge amount of money in the summer, and the results are already coming. It’s safe to say that this will be a real challenge for Carlo Ancelotti’s men.

On this week’s edition of Behind Enemy Lines, I spoke to a huge Chelsea supporter by the name of Zac Djellab. I suspect a good amount of you have heard of him, as he is a presenter for Football Daily, Sky Sports, and Chelsea FC itself. I myself am a big fan of his content, and so it is quite a pleasure to have him with us this week. Without further ado, here was our conversation:

Q: After a bit of a shaky start, Chelsea have certainly found some form and now sit 3rd on 22 points having gone unbeaten in the last 9 while winning 4 of the last 5. What has Lampard done to steady the ship and do you feel Chelsea have a real shot at the title?

A: To be honest, it was always going to take time to adapt to the new players in the squad, signing so many players who enter the starting 11 was never going to see them meshing together instantly. But over the past month or so we’ve really started to see them all come into their own and Lampard has also played a big part in that. Last season we normally played a 4231, whereas this year 433 fits our system and players well. It also helps in having the best DM in the world in N’golo Kante. As for a title shot, I think I’ll be able to give a more confident answer come January, but I’d be lying if I said that what I’ve seen (especially the last 2 months) hasn’t excited me. We definitely have the capability to challenge for it!

Q: Chelsea were the biggest spenders during this summer’s transfer window, making up for the transfer ban that hindered them the year prior. Out of all the new big-money signings, who do you think has had the biggest impact and who has had the least? Is there a certain player that Chelsea need more from?

A: The biggest impact is probably split between Mendy, Ben Chilwell, and Thiago Silva but it’s so hard to pick one, that’s also not to say our attacking signings haven’t made an impact, but Chelsea last season didn’t necessarily struggle for goals, whereas defensively at times we were shaky. If I had to pick one, it’d probably be Mendy. From what I had read, Mendy was a decent keeper, good in the air, and a really good shot-stopper, but from what I’ve seen he’s fantastic! He reads the game so well, always makes the right decisions, brilliant in the air, and to my surprise, as I hadn’t really seen much of him beforehand, awesome with his feet, his distribution is really good. As for least, I don’t really have one, we’re only a quarter of the way through the season, and for many players moving to a new league is tough on its own, let alone during a pandemic. I’m honestly really happy with everyone!

Q: As an American myself, I always root for Christian Pulisic to shine. How important do you think he is and can be for Chelsea and how big of a boost is it for him to be back from the injury he suffered in the FA Cup Final?

A: As we’ve already said Chelsea made a lot of signings in attack this season, but I still think if he reaches his potential, Christian Pulisic could be the best player at the club (and that’s saying a lot with the potential of everyone else!) The left flank (much like Hazard over the past decade) could be his for years to come. When he’s on form and running at attackers at full sprint with the ability to take it either way and shoot well with either foot, he’s lethal and has a massive future at Chelsea. Seeing him play excites me so much and having him back from the injury is so good! My one worry is that hamstring, it’s played up a couple of times and Chelsea are in a fortunate position where we don’t have to rush him back, so I’d love to make sure he’s 100% fit!

Q: Most believe, including me, that it was quite an accomplishment for Frank Lampard to get the squad he had into the Champions League places. Now that he has been able to spend, and spend he did, what do you think are Abramovich’s expectations for Lampard, and how tight of a leash do you think he will have in comparison to Chelsea managers of the past?

A: Frank will mostly be in a more fortunate position than maybe other managers, but I don’t think it’s everything. If results go downhill or negatives start happening Chelsea expects the best and he knows that, plus he has shown and spoke about that before and knows the expectations. In my opinion, it is a 3-year project (realistically starting this year) whereby the end of it, Chelsea won’t only be the dominant team in England, but also in Europe much like how Liverpool and City have been in recent years. Chelsea definitely have all the tools to do that and it’s going to be an exciting time, especially seeing as half the squad is from Cobham and more and more players are coming through!

Q: Fans are finally back at Goodison Park this week. How do you think that may impact the game and who do you think will win the match on Saturday?

A: Seeing the fans back is brilliant! Chelsea had fans at the Leeds and CL fixtures and it was just like a bit of normality was returning! It was very funny to see the Stamford Bridge faithful “oooing” Diego Llorente for the rest of the match after he dived. So little things like that definitely play an impact, but more so, players react better to situations. If you’re 1-0 behind and you hear the fans cheering you on, it’s only going to push you and make the opposition warier than if not. It’s a staple of football and hopefully, we’ll see the numbers increase over the coming months. As for the game, it’s going to be very different from the last time we played you. Calvert-Lewin is a man on fire at the moment and we’ll have to limit his chances. James Rodriguez is always lethal and your midfield is Champions League standard! But I do think if Chelsea field a fully fit side we’ll come away with 3 points, 3-1 is the scoreline I’m thinking!

So there we have it! I honestly think Zac’s score prediction is quite a good one. I’ll say 3-2 to Chelsea, as I think they have too much quality and depth for Carlo Ancelotti’s depleted squad. My thanks again to Zac Djellab for joining me. You can find him on Twitter @ZacDjellab and also on the @FootballDaily Youtube Channel. You can find me on Twitter @ParrettGost and I would love to hear some feedback about the series or your general thoughts on the season. Thank you all for reading, and as always, Up the Toffees.