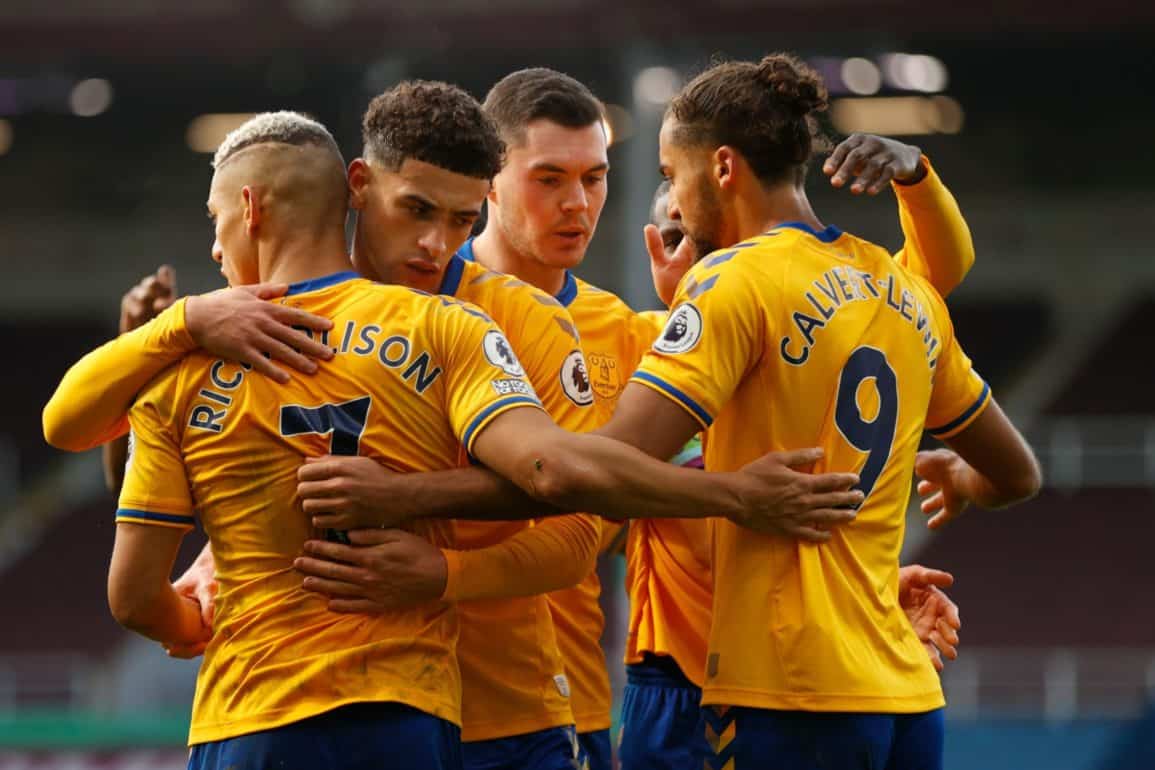 Blues miss chance to go fourth as the points are shared.

Another clinical finish to a Richarlison cross by Dominic Calvert-Lewin saw Everton take poiint from Turf Moor having fallen behind to an early strike from distance by Robbie Brady.

A busy December schedule for Everton began with this visit to Turf Moor to face a Burnley side languishing in the bottom three of the Premier League table.

Burnley boss Sean Dyche was overseeing his 200th Premier League game in charge of the Clarets and with just one win – over Crystal Palace – so far this campaign, he was desperate for his side to show more of the form they’ve showed in the two previous seasons. A five-nil thrashing by Manchester City last weekend was a setback after that one win and taking a point at Brighton, and ahead of this clash with the Blues, Dyche had injury concerns. Summer signing Dale Stephens has resumed training, along with Robbie Brady, so both were expected to feature however, Phil Bardsley and Johan Berg Gudmundsson were doubts. Major positives for Dyche were number one goalie Nick Pope being available having missed the game at the Etihad with a concussion, and midfielder Josh Brownhill also ready to return.

Speaking about his time at Burnley, Sean Dyche commented, “I’ve become rounded about what football is and how it works behind the pitch, as a manager and managing many different things. And then on the pitch, you try and learn as you go. It’s always tough in the Premier League, it has been historically for us and I don’t think that’s going to change – certainly not at the minute. It’s a tough place to be, but it’s a very enjoyable place to be. It’s a top division and most people suggest one of the most competitive in the world. It’s a good place to be and I think 200 games is pretty decent, because I don’t think it’s easy for English/British managers to get games in the Premier League now. So, 200 is a pretty good marker.” Burnley have beaten Everton more times at Turf Moor than any other club in the Premier League, with four home wins against the Toffees, and not one of the twelve previous meetings between the clubs in the Premier League has ended in a draw.

On the back of four losses in the last five games, Everton were in dire need of both a performance and the points to get the season back on track. Carlo Ancelotti still had defensive worries in terms of the number of goals being conceded and with Seamus Coleman still out with a hamstring injury and Lucas Digne a long-term absentee, many Blues fans were expecting a repeat of the back three formation that featured against Leeds, something the manager confirmed in his pre-match press briefing. “We are without two important players in Coleman and Digne. It is for this reason [we have played with three at the back]. I think we have the quality in the squad to play with three centre-backs. We have a lot of good central defenders. The fact we can play with three or four [at the back] is good for us.”

The Italian was clearly aware of the expectation following last weeks home loss to Leeds as turning his attention to the schedule facing the club, he said, “It will be important to have a positive result against Burnley because we want to stay in touch at the top of the table. We are starting a very important period, we have a lot of games around Christmas… it is true there is a lot of competition at the top but we want to be there. It is important to have consistency in our results. In this period, we want to stay in touch and prepare well for the second part of the season.”

And looking to the first hurdle to be overcome he added, “Burnley have a strong identity and strong organisation. It will be a tough game, they are better now compared to the start of the season. We know what kind of game to expect. We haven’t found balance yet; we are really good offensively but had problems defensively. We have tried to solve this problem and every game is a test to see how we are.”

Having weighed up the opposition and conditions at Turf Moor, he made two changes to the side that started against Leeds and again went 3-4-3 in naming his starting eleven: Pickford, Godfrey, Mina, Keane (c), Iwobi, Doucoure, Allan, Delph, Rodriguez, Richarlison and Calvert-Lewin.

On a cold, sunny early afternoon in the snowy East Lancashire hills, our referee was Anthony Taylor.

A disastrous start for the Blues as a careless giveaway saw Westwood find Robbie Brady and he struck a powerful shot low from outside the penalty area to the right of the diving Pickford and the home side opened their account inside two minutes.

Pope punched away a deflected James shot as Everton tried to hit back but, there was a lack of pace and penetration from the visitors in the opening exchanges in contrast to the more energetic approach of the home side. Godfrey defended well as Lowton picked off a throw-out from Pickford intended to set Delph free, Lowton crossing for Wood and the former Norwich centre-back clearing positively.

Iwobi got free on the right to send a tantalising cross to the near post where it was met be Calvert-Lewin, Pope making an instinctive save and Mee hoofing the loose ball to safety. Richarlison and James worked the ball wide again for Iwobi and his low cross-shot was well gathered by Pope as the Blues – in the amber away strip – finally got forward meaningfully.

James with a terrific crossfield ball found Richarlison who skipped away from Lowton to gain the area and fire in a shot that Pope was pleased to gather cleanly. Everton though were struggling to maintain possession in midfield, both Allan and Doucoure guilty of losing the ball too easily. Brady again worked the ball well to evade both Allan and Doucoure and set up another shooting chance for Brownhill who screwed his effort wide.

On 26 minutes, Fabian Delph pulled up holding his right thigh, another hamstring injury to blight his time with Everton. Tom Davies Mason Holgate and Andre Gomes all began to warm up as Delph gingerly limped off – Andre Gomes his replacement and a change of formation to a back four.

A good break from his own half by Doucoure saw him feed DCL to win a corner that James swung in, Mee with the first header and Burnley cleared. Another good tackle and surge forward by Iwobi saw him play a through ball just too far ahead of DCL, the former Arsenal man looking much happier on the right compared to his left sided role against Leeds.

Doucoure and Allan, slowly getting into the game, worked the ball to Richarlison and his direct running led to a shot that was disappointingly wide of the target. Burnley won a 38th minute corner off the head of Keane, Pickford effectively punching the McNeil set piece clear. An excellent cross from the left by Richarlison saw Tarkowski concede a corner before DCL could get to it. Burnley cleared and a long ball down the centre of the field reached Wood in space and Pickford was quick off his line to make a very good stop with his knees.

Gomes and Brownhill collided in midfield, the Burnley player hurt by the left elbow of the Portuguese in a clearly accidental coming together. Three added-on minutes were signalled and Everton used the extra time perfectly – Allan winning the ball and playing a great ball to find Richarlison on the left and his low cross into the six-yard area was met perfectly by Dominic Calvert-Lewin to level the score at the break.

No further changes for the second half as the shadows lengthened in the wintry sunshine, and a good ball from Iwobi found DCL wide right and his cross saw both Richarlison and Gomes have shots blocked as the Blues looked for an early breakthrough.

Everton put together their best move of the match so far with James, Gomes, Richarlison, and Doucoure all involved before Iwobi fed James to curl a shot that Pope acrobatically turned around the post for a corner that was well defended.

Approaching the hour mark and Burnley were making Everton work hard in looking for whatever openings they could force. Richarlison won a corner off a hurried attempted clearance by Brownhill but again, the set piece execution was poor. Everton were still being sloppy in possession, too many easy passes going astray and limiting any chance of building momentum to keep Burnley under pressure.

Good determination from Gomes saw him find James and he played Iwobi unto space only for his cross to elude both DCL and Richarlison arriving into the Burnley penalty area. McNeil did well to turn away from both Iwobi and Allan to win a corner off Mina that saw Allan get an important block to a volley from Brady.

Three good pieces of defending by Mee prevented James, DCL and James again getting on the end of crosses ahead of Chris wood going down and needing attention after an awkward fall. This game was still very much up for grabs as neither side seemed capable of taking full control.

Into the final quarter of an hour and Burnley made a change bringing Ashley Barnes on for Jay Rodriguez. James with a searching ball found Doucoure in a forward position but nobody was there to take advantage of his knockdown. A clumsy challenge by Doucoure on Taylor gave the home side a free kick wide on the left, swung in by Westwood and the ball fell for McNeil whose shot was deflected behind for a well defended corner. Mina conceded another corner preventing Wood from getting to a cross from Barnes, Pickford with a good punch to launch a counter attack that ended with Gomes firing high and wide – another disappointing finish.

Gylfi Sigurdsson came on with ten minutes to play, replacing Abdoulaye Doucoure, Carlo Ancelotti looking for something inspirational from the Icelander. Pope was quick to stop DCL getting to a ball from Richarlison. A free kick for Burnley saw Allan concede another and Jordan Pickford made an excellent reflex save to deny a close range header from Wood. Burnley made their second change on 85 minutes, Josh Benson replacing Brady who’d gone down with cramp.

Burnley calmly defended another Everton attack ahead of Cenk Tosun replacing Allan on 88 minutes. Mina conceded another corner that saw Keane get a fine clearing header. Richarlison to James and a precise through ball to Sigurdsson saw Pope save well with his legs and four added minutes were signalled, could Everton do again what they’d done in first half added time?

Sadly not, and Everton spurned the chance to go back into the top four – another somewhat disappointing outcome.