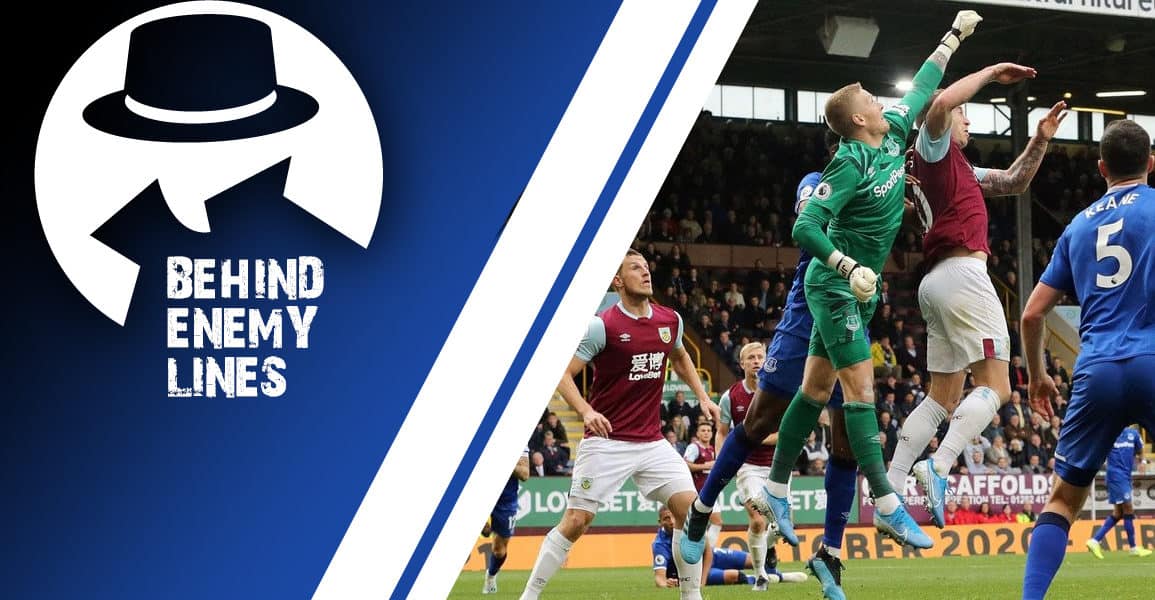 Behind Enemy Lines: Burnley (A)

It’s a must-win game for Everton as the Toffees meet relegation candidates Burnley at Turf Moor on Saturday. On the back of a disappointing home defeat to Leeds, which was Everton’s fourth loss in five, the Blues come into the early kickoff desperately needing three points in order to stay on track for their European aspirations.

Burnley are also coming off a tough defeat, but it’s a different situation as they were pummelled 5-0 by Manchester City for the fourth consecutive time at the Etihad. This season looks to be a real uphill battle for Dyche’s men, who are seemingly caught right in the middle of a relegation battle. Picking up points in home games such as this will be crucially important for Burnley if they want to stand any chance of staying in the top flight. So, yet again, it is a vital game for both teams and should be a hotly contested match at Turf Moor. For Toffees like myself who live on the West Coast of the United States, it’s yet another 4:30 AM kickoff, but you best believe I’ll be up and raring to go because a win is absolutely essential for Carlo Ancelotti & Co.

On this week’s edition of Behind Enemy Lines, I spoke to a notorious Burnley fan named Liam, also known as Vizeh to his 225,000 YouTube subscribers. He has gained notoriety making football, FIFA, and Football Manager content for a number of years. Let’s see what he has to say about Burnley’s season and this weekend’s match.

Q: It’s been a very poor start for Sean Dyche’s Burnley, who sit in 19th with 5 points from 9 games. What do you feel has been the biggest problem for the Clarets?

A: Injuries have hit us hard, the most important of which was the loss of our captain Ben Mee. Since he’s been back, we beat Palace and got a needed point away at Brighton, and I believe we wouldn’t have won either without him. He brings an obvious calmness and self-belief to the group. We’ve looked more ourselves since he’s come back, forgetting the annual 5-0 loss to City, of course.

Q: There’s been no lack of coverage concerning Burnley’s lack of investment in the squad. What position do you feel need’s strengthening the most in Dyche’s squad and why?

A: We’ve been in need of a right-back for 2 years, but still none have come in. We’ve needed actual wingers for 3 years, but instead, we play the most injury-prone players in world football otherwise known as Robbie Brady and Johan Berg Gudmundsson. They can only play about 2 seconds before collapsing on the floor. We are subsequently forced to play full-backs and central midfielders as wingers, which is confusing and blatantly insulting to Sean Dyche, as he is not being backed enough to bring the players needed to the club.

Q: Burnley have only scored 5 goals this season, and only Chris Wood has scored more than once. Why is Burnley’s attack so blunt this season and how can that be fixed?

A: Sadly other than crosses, long balls, and set-pieces, we have no other method of scoring goals. We’re incredibly reliant on young Dwight McNeil, who’s been found to be our only real form of creativity. Teams double press him at all times because if you can stop him from supplying crosses in the box, we have no real hope of scoring other than a freakish rebound or a header.

Q: Most consider Dwight McNeil to be the most exciting player at the club. What are his best qualities?

A: Most? If you don’t, then you’re crazy. His ability to run wide with the ball, do 15 faints at once, and still get a quality delivery into the box is incredible, hence why so many teams try to stop it. Due to our system, he’s got incredible work-rate to drop back and fight for the ball if need be.

Q: Who do you think will win the match at Turf Moor on Saturday and why?

A: Despite the City game, I personally don’t believe we’ve been awful in recent games. Defensively, we’ve looked good since Ben Mee has come back in. I still get nightmares of the 5-1 loss to Everton on Boxing Day, potentially the worst evening in my life. It’s a tough one, as Everton are in poor form, and Turf Moor is never a good place to go to while in poor form, but our attack may struggle. I’ll genuinely say 0-0 and take that.

So there we have it! I personally think that Carlo Ancelotti’s Everton will find a way to win this very important game on the road, and I’ll throw out 2-0 as a guess for the scoreline. If the Toffees do fail to win, however, expect quite a bit of ranting in my player ratings on Saturday. My thanks to Liam, who you can find on Twitter @OfficialVizeh or on his YouTube channel “Vizeh”. Thank you for reading, and I’ll see you directly after kickoff for what will hopefully be a very positive set of player ratings. And as always, Up the Toffees.