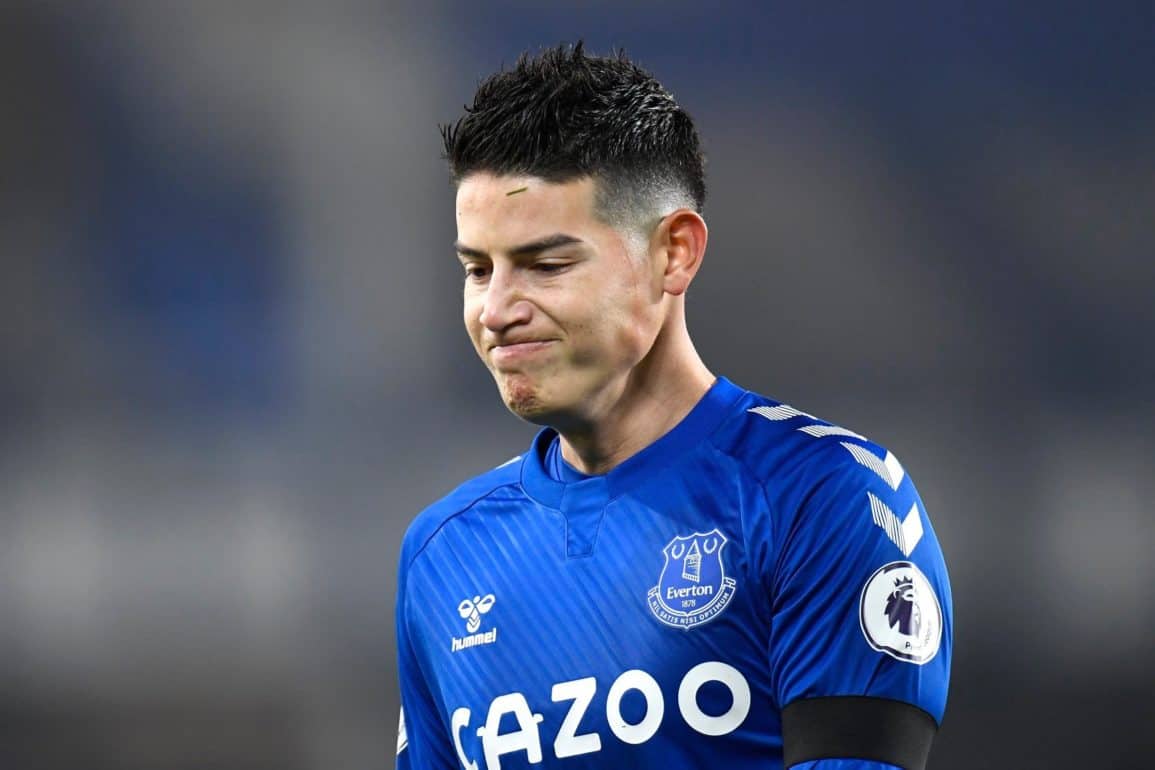 One moment of quality was the difference in a hotly contested bout at Goodison Park on Saturday. Leeds new boy Raphina opened his account with the Yorkshire club with a goal eerily similar to that scored by James Rodriguez at the same goal against West Brom. It was a lovely strike into the bottom right-hand corner which Jordan Pickford could do nothing about. It’s a damaging blow to Everton’s European title hopes, and Carlo Ancelotti will be bitterly disappointed with the fact that his team were unable to score against a team who had conceded 17 goals in the league thus far, including 4 to Crystal Palace just two matchweeks ago. The return of Kalvin Phillips to full fitness was huge for the Whites, who funneled nearly attack through the Leeds born midfielder. His range of passing was on full display. Everton have now lost 3 home games against newly-promoted sides since the beginning of last season, which simply is not good enough. They will look to bounce back against Burnley in a weeks time with an early kick-off at Turf Moor, which after this defeat, appears to be a must-win game for the Toffees. Without any further adieu, here are my player ratings for Everton 0-1 Leeds.

This was probably Jordan Pickford’s best performance of the season potentially alongside the game at Tottenham Hotspur Stadium. He made a few fantastic saves, including a kick save on Bamford in the first half which denied a sure goal, a fantastic fingertip deflection on Raphina’s looping header, and a smothering of Helder Costa’s late chance at the Park End. He also claimed the ball well, aside from one ball which he dropped but regained without pressure. Leeds had an xG of 3.05, and it looked like Pickford might have stopped them from bagging any until the match-winner which the England Number 1 had no chance of stopping.

It was an up and down performance from Everton’s newest player. He had a crucial goal line clearance in the first half and looked solid defensively, but his decision making while attempting to progress the ball seemed a bit lackluster. The goal came from a shot that went through the young English defender’s legs, but that was more unlucky than any fault of Godfrey himself, Overall, it was a decent enough performance from Ben, and he was certainly not the most of our problems.

I thought Mason Holgate was a bit poor again today, as he still seems to be just short of full fitness and certainly short of match sharpness, in FM terms. I think Ancelotti dragging him off after the goal was the correct decision, but I honestly wouldn’t have minded seeing him exit the fray even beforehand. I still remain hopeful that Mason can regain his form from last season with a solid run of games, and I do believe that when he is at his best, he is the best center back in this Everton team. He has not confirmed those beliefs to be true just yet this season, but I have reason to be optimistic that he can turn it around.

I honestly can’t remember much from Michael Keane’s performance, but I am confident in the fact that Ben Godfrey was our best defender and that Mason Holgate was our worst, so I guess I’ll put Micheal Keane right in the middle. Other than one header from a free-kick delivery which he sent well over the bar, there wasn’t much to note from the English international’s night. With all the frenzy of activity in tonight’s match, I seemed to lose Michael Keane in the fray, so that is all the reason I have to work with here. All I can remember is the missed header and the one very poor giveaway which Leeds didn’t punish him for.

The academy product had a very bright start to the game, bombing down the right-hand side before delivering an inch-perfect cross for Abdoulay Doucoure, who someone managed not to score. Davies should’ve had an assist within the first 10 minutes, but it wasn’t to be. He played well for the first half of the half, if you will, but completely tapered off as the match continued, and was rightfully hooked off after 61 minutes by Carlo Ancelotti. His engine is certainly still there, but he doesn’t have the quality attacking down the right flank that Iwobi does.

Speaking of the Nigerian, it was yet another position change today for Alex Iwobi, who started at LWB in place of the seriously injured Lucas Digne. We can’t expect Iwobi to fill the shoes of one of the best left-backs in Europe, and I think he was adequate today. He is definitely more effective playing down the right, in my opinion, which we saw for the final half-hour after Fabian Delph’s introduction. I honestly think Iwobi should have started on the right with Niels Nkounkou down the left. There are two fit natural full-backs left in the squad now in Jonjoe Kenny and the aforementioned Nkounkou, but Ancelotti decided to include neither. It doesn’t make much sense to me. Nkounkou on the left and Iwobi on the right will hopefully be what we see in the pivotal match against Dyche’s Burnley next week.

I saw some Man of the Match shouts for Allan on Twitter, but I think that may be rating him too highly. Although the poor performance of Doucoure left the Brazilian exposed yet again in the midfield, it doesn’t change the fact that Allan was a step behind many times, allowing Kalvin Phillips far too much time on the ball in the Everton half to ping diagonals and incisive passes into Raphina, Harrison, Klich, and the like. Going forward, he carried the ball really well and was not afraid to drive into the space left in front of him, but he mostly failed to pick the right pass after getting himself into those positions. Allan was certainly one of our better performers, but that isn’t really saying a ton and I don’t think he did enough to put himself up there with Jordan Pickford for Man of the Match.

This may seem harsh, but I really wasn’t impressed with Doucoure today. As I previously said, he left Allan very exposed yet again for seemingly the umpteenth time this season and failed to really make any impact going forward. He also missed an absolute guilt-edged chance which you’d expect a professional footballer to finish ten times out of ten, but somehow kept it within the reach of young goalkeeper Meslier. Doucoure remains our best secondary option in the midfield, but he needs to put out a better performance against the Clarets in a week’s time.

This was Richarlison’s worst game in an Everton shirt in quite some time, honestly. He lacked any bit of quality in the final third and made some very poor decisions from promising positions. He pea-rolled two incredibly tame shots on the floor straight into Meslier’s grateful gloves, as well as hitting a few puzzling attempted passes in and around the box, including one that he almost shot at Calvert-Lewin in the first half which really frustrated me. At the end of the game, he had one run where he tried driving toward the endline but his touch was so poor that he had to slide just to keep it in play. The worst of his moments attacking the Leeds goal came when James’ dinked pass came perfectly to his left foot to strike on the volley, but he sliced it significantly high and wide into the empty Gwladys Street End. It was an uncharacteristically bad performance from Everton’s industrious Brazilian, and he remains on just one Premier League goal so far this season. I expect him to get on the scoresheet next week.

Everton’s Colombian superstar was the best creative outlet yet again today, but he found it difficult to carry the team’s artistic workload in the absence of Lucas Digne. He was one of the only sparks going forward for Everton and had an absolutely spectacular goal correctly ruled out for offside. His delivery into the box from set-pieces was fantastic yet again but disappointingly failed to lead to a goal. He whipped in most likely his first poor corner in a blue jersey. Although he didn’t get much love and failed to produce a much-needed goal for Everton, I think James still performed at a good level and was not to blame for the lack of clinical finishing upfront.

Today’s game wasn’t really one that suited Dominic Calvert-Lewin’s newfound abilities. Everton lacked possession for most of the game, finishing with just 41% at home, and Calvert-Lewin’s greatest moments of freedom came on the counter-attack when he picked up the ball in the channels like in years gone by. We have learned, however, that those scenarios do not bring out the best of DCL, and he was unable to conjure anything while running at Leeds’ stretched backline. Dom’s performance next week will be another crucial one, and hopefully, he can get back on the scoresheet in Lancashire next week. He hasn’t failed to score in consecutive games all season and I expect him to keep it that way next Saturday.

Don’t hate me, but I do think Delph did well today. He offered defensive stability at LWB and made a few good recoveries, including one on Poveda deep into the second half. He had one poignant giveaway, which ultimately led to nothing. He wasn’t bad today, but maybe that’s just our low expectations talking.

I don’t really know what to rate Andre Gomes, so I’ll just leave him blank. Was he good or was he bad? I have no clue. He had a few nice interchanges after coming on, but couldn’t come up with anything game-changing, so I guess I’ll leave him alone for the time being.

Bernard touched the ball maybe 4 times, so I’ll leave him blank as well.