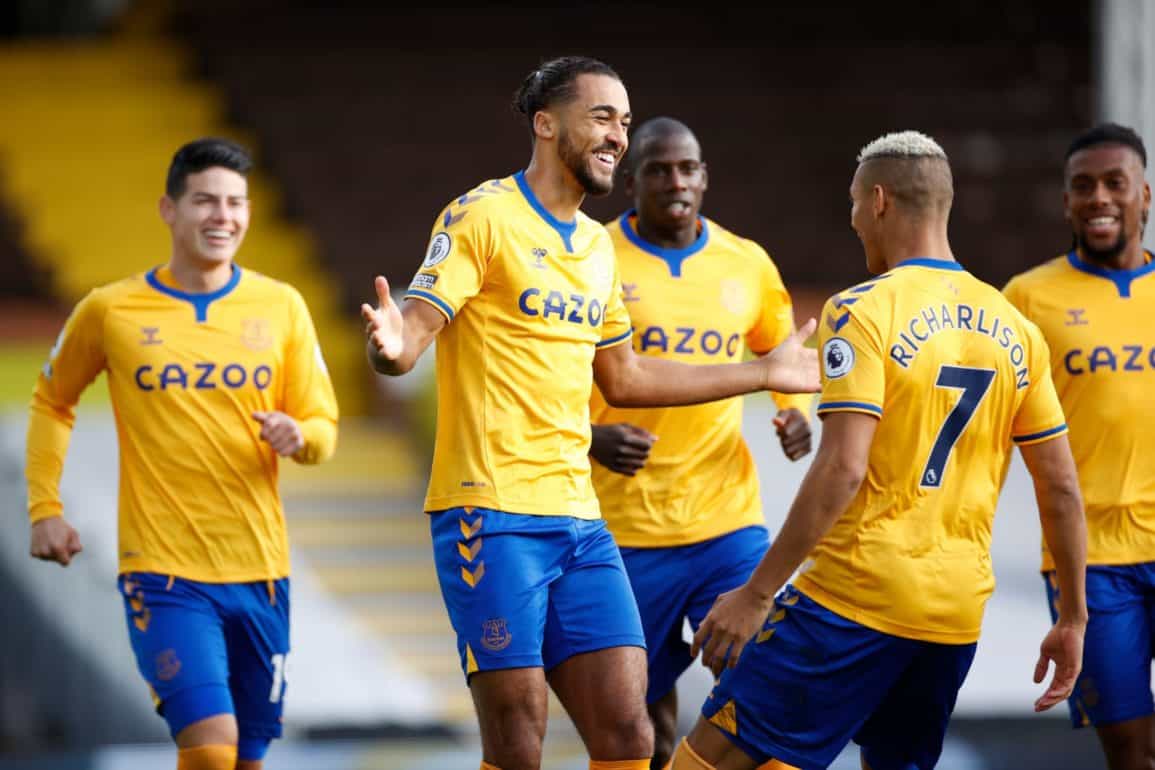 A game of two halves as Everton dominated the first and Fulham the second, thankfully the first being the better from the Blues perspective as it produced a double from DCL and a lovely header from Doucoure.

Midday Sunday, Craven Cottage the venue and in the eyes of many Evertonians an absolute must-win game as the Blues faced a Fulham side with only one win and one draw from their eight games so far. Everton’s fine start to the season has stalled since the three game suspension of influential Brazilian forward Richarlison but with his return, expectation levels were restored for an immediate return to winning ways after three straight losses.

Fulham are finding it a difficult transition from the Championship to the Premier League and in many peoples eyes, are one of the favourites for the dreaded drop back to the second level. And manager Scott Parker was under no illusion of the size of the challenge his side would face when the Blues arrived on the banks of the Thames when he said, “Carlo Ancelotti is an incredible coach, his CV and what he’s done in the game as a manager speaks for itself, so it’s not a surprise in any way that he’s gone in at Everton and is doing as well as they are. They’ve got a manager there who’s world class. Likewise with their squad of players, there’s some fantastic football players. I think they’ve invested and bought very well in the summer. They’ve got a real good strength and balance in terms of what they’re about.”

Last time out, Fulham lost narrowly at West Ham with former Everton striker Ademola Lookman lamentably missing a late penalty but Parker believes the player will learn and grow from that experience. “As you can imagine, Ade was bitterly disappointed, like we all were. There’s no hiding from that. But, like most things in life and certainly in football, you need to learn from those mistakes and move on. We move on very quickly, practise, get better. Like I said after the game, Ade’s going to be vitally important for us this year. He’s going to be a big player for us, which we’re going to need, and I’ve got no doubt from what I’ve seen from him in a short space of time that he wants to get better, he wants to improve.”

With three straight losses to Southampton, Newcastle and Manchester United to bite back from, Carlo Ancelotti also was under no illusion of the expectation of the Everton support. And with his South American contingent safely back from their international duties with Brazil and Colombia, the Italian was delighted to advise, “The players from South America came back yesterday [Thursday]. They were okay, they tested negative [for COVID-19]. They trained on Friday. It seems they don’t have problems. They are quite fit, a little bit tired from the travel, but we have time to recover until Sunday. To have one more day to recover is really important, especially for the players who only arrived back [from international duty] on Thursday.”

In terms of the rest of the squad, he confirmed that Fabian Delph had recovered from a minor injury and was available but, “We have Seamus Coleman unavailable for this game and Gbamin, but the others are in good condition.” The Everton manager added midfielder Jean-Philippe Gbamin is “in the last part of his recovery” from an Achilles injury and “will be ready in two or three weeks to train and play.”

Needing a win to get back in touch with the top places in the table, Ancelotti made four changes in naming this starting line-up: Pickford, Godfrey. Mina, Keane, Digne (c), Doucoure, Allan, Iwobi, Rodriguez, Richarlison and Calvert-Lewin.,

Our referee at a Craven Cottage under re-development and bathed in autumnal sunshine was Andy Madley.

Everton in their gold shirts defended the end where the travelling fans should have been in their thousands in the first half, and got off to a dream start as inside a minute Fulham panicked attempting to play out from the back, Richarlison capitalised to get into the box and cross for Dominic Calvert-Lewin to tap home his 12th of the season from less than two yards.

A wayward pass from Iwobi saw Pickford hoist a high clearance that hit Keane on the arm to give Fulham a free kick that saw Richarlison back to defend well. Digne conceded another free kick by the right wing corner flag but the Everton defence played Fulham offside to avert any possible danger. Everton nearly doubled the lead in the 12th minute as Godfrey released Iwobi to play a one-two with Rodriguez before crossing towards DCL, Fulham scrambled the ball clear.

Fulham responded with former Everton player Robinson crossing from the left and Pickford tipping a short range effort from De Cordova Reid away for a corner that came to nothing. However, the home side struck back on the quarter hour mark as sharp passes between De Cordova Reid and Cairney saw the former into space in the Everton area for an easy finish.

DCL got a great finish to a cross from the right but his ‘second goal’ was ruled out for him having strayed marginally offside as the ball from Iwobi was played. Areola in the home goal produced a super save to deny Richarlison who jinked his way past a defender after a neat build up involving DCL. It had been an entertaining opening twenty minutes with both sides looking somewhat suspect in their defensive capabilities producing no shortage of scoring opportunities.

Good work from Lookman and De Cordova Reid set up a shooting chance from Aina but he blazed wide of the target, Everton responded with DCL and Iwobi finding Rodriguez to cross towards Richarlison, the goalie claiming too easily.

Everton scored an absolute peach of a second goal in the 29th minute as Iwobi went on a mazy run down the right flank, beating three Fulham players, to feed Rodriguez in the centre who relayed the ball left to Digne and his low cross was superbly finished by Dominic Calvert-Lewin for his second of the game.

Everton were enjoying great possession with Alex Iwobi seeing plenty of the ball on the right, and it culminated in a third goal as he found Doucoure, he fed Rodriguez spread the ball wide left for Digne and his excellent cross to the near post saw Abdoulaye Doucoure arriving to rise and plant a firm header beyond the reach of Areola – great move and finish.

Fulham were really struggling to contain Everton and another period of possession ended with another cross from Digne on the left seeing an air-shot from Richarlison before being smuggled away to safety by the home side. Into the final minute of the first half and whilst Carlo Ancelotti will have been delighted with his sides offensive work, he will have wanted his defence to tighten up for the second session.

Two added minutes were signalled and Everton laid siege to the Fulham goal with Areola saving well from Rodriguez to end an enjoyable half of open, expansive football.

No changes by either manager for the second half and Everton went straight on the attack winning a free kick that Digne played in for Richarlison to bring another save from Areola. Fulham responded with Lookman crossing from the right with nobody there to get on the end of it – end to end footie as per lots of the first half.

DCL turned a defender well to try a speculative shot from all of forty yards as Fulham warmed Mitrovic up on the touchline. The opening ten minutes hadn’t produced quite the same level of intensity from Everton and another cross from Lookman saw Allan get the ball away. Good work from Godfrey saw him deny Cairney to find Iwobi and Robinson was booked for an overly strong challenge on the Nigerian.

Fulham were pressing and Mina blocked a shot from Cairney and when the ball went out of play, Scott Parker made a double change; Mitrovic and Loftus-Cheek replacing Cairney and De Cordova Reid respectively. Cavaliero tried his luck from 25 yards, Pickford saving and castigating his central defenders for allowing the shot in the first place.

Fulham were having the better of the second half without overly troubling Everton, the gold-shirts having relaxed a tad and it led to a Fulham penalty as Loftus-Cheek went down over the trailing leg of Godfrey in 67 minutes. Cavaliero stepped up, slipped as he shot and the ball spooned up and over the bar. Lemina immediately gave way for Anguissa as Fulham made their third change and Fulham did reduce the arrears as Lookman again caused problems for Digne and his pull back from the byline saw the shot from Loftus-Cheek deflect off Mina to loop over Pickford – wake-up time Blues !!!!

Fulham were now bossing proceedings in search of an equaliser and Everton looked nervous and at times ragged leading to Tom Davies replacing James Rodriguez in the 74th minute to add a bit of bite to the midfield. A quarter of an hour to play and a quarter hour Everton needed to do much more in than the previous one.

Gylfi Sigurdsson was the second change, two minutes after Davies, replacing Richarlison for the latter stages of a game that appeared won at half time but was decidely up for grabs with Fulham still working hard.

Davies with a fine block denied Lookman who had been a threat all game against his former employers as Fulham kept coming forward in search of a third marker. Digne found by Allan won a corner to bring some relief to the Blues defence, Sigurdsson wasting the set piece planting the ball straight into the waiting gloves of Areola.

Everton eased the pressure in the final five minutes but when five added on minutes were signalled, they knew Fulham would gain fresh heart for one final push. Davies did well to waste some valuable time but more defending was needed to keep the home side at bay and at times, anywhere was good in terms of clearing the ball to safety. Lookman switched wings to fire a cross too long from the left and Everton breathed a sigh of relief as the final whistle finally came.