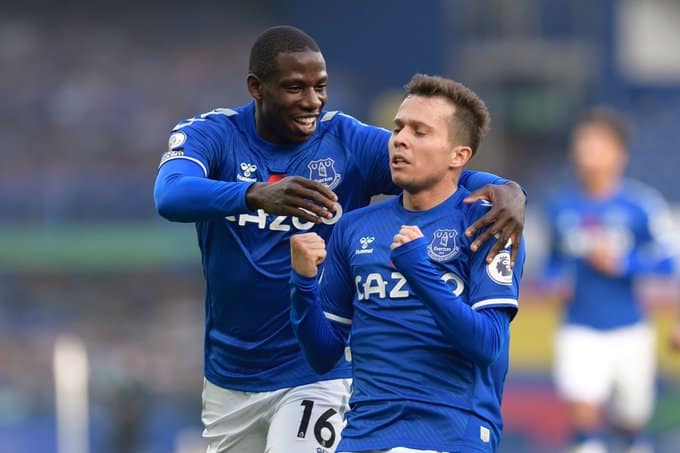 Everton’s hot start has well and truly gone. It’s now three consecutive defeats for the Toffees, who have yet again proved that they cannot win without Richarlison in the team. I fear for when the Brazilian finally moves on. Without further ado, let’s get this over with.

There’s nothing Pickford can do about the goals, but the incident with Harry Maguire in the second half was truly horrendous. Instead of just letting the ball sail behind for a goal kick, Pickford decided to catch it and then started falling out of bounds, and so he dropped it back in play right at the feet of the English center half and then nearly gave away a penalty trying to make up for his mistake. Please play Olsen again, Carlo.

I thought the Everton skipper did alright and held his own in the lightweight UFC match he was having with Bruno Fernandes all game, who by the way, should have been sent off about 3 times over. He had a few moments of quality and turned in behind well, but it wasn’t to be.

It was a very poor return for Mason Holgate, as Everton’s defense looked very leaky in the first half. Holgate and Keane let Bruno Fernandes have an unmarked header in the box and made the same mistake with Rashford, who ended up missing the ball, but Fernandes’ cross went in off the post anyways. This was not the Holgate we were used to seeing last season.

The same thing goes for Michael Keane. The two goals were the result of inexcusably poor defending. I wouldn’t be surprised to see Carlo drop one if not both of the center backs from today for Fulham in a few weeks.

Back from his one-game suspension, Lucas Digne had another uncharacteristically bad game in terms of delivery. He overhit many crosses throughout the game and his quality just wasn’t there today. I expect more from him as we move forward.

I thought Allan played alright today, but it was the same problem as the Southampton game in Everton’s midfield. Gylfi Sigurdsson’s complete lack of mobility left Allan very exposed in the center of the park, and although the problem wasn’t such an issue in the second half, Everton were being overrun in midfield during large portions of the first half.

Abdoulay Doucoure has offered very little going forward for Everton in his brief time in the blue shirt, and in the second half, he spurned the two best opportunities for an equalizer. On the first go-round, the big Frenchman sent a perfect cut-back well over, and deep into stoppage time, he completely missed the ball that was sent in by Iwobi, leading to a United counter-attack and Edinson Cavani’s first goal in red.

At the moment, Gylfi Sigurdsson and Andre Gomes are having a competition to see who can get dropped from the starting XI more this season. Sigurdsson’s delivery from set-pieces today was awful, and I don’t understand why he was taking them when Digne and James were both on the pitch. His lack of mobility exposed the midfield yet again, and he offered nothing in attack or defense. I don’t think anyone will be too fussed when he inevitably leaves the club next summer.

It was not the Colombian Superstar’s best game today, and he struggled to have any influence on the game in the first half. In the second half, he dropped deeper and looked to get on the ball more, but he failed to produce anything of note. His connection with Richarlison was blatantly absent, and I look forward to seeing the pair linking up again at Craven Cottage. It was interesting to see Carlo move James into the midfield for his final 20 minutes on the pitch, and I don’t quite understand why the playmaker was dragged off for the final 10 minutes or so.

I think Bernard was probably the best player on the pitch today for Everton. He was lively all game and took his goal very well indeed. His performance dropped significantly in the second half, however, and he was wasteful with his delivery. Although he scored and played pretty well, he is not the same kind of player as Richarlison, who is a huge part of why Carlo Ancelotti’s system works. Calvert-Lewin was very isolated because Bernard cannot play like a second striker in the way Richarlison does. That being said, Bernard filling in was the least of our issues today.

It was another difficult day for Everton’s number 9, who yet again was starved of any real service. He held the ball up well and had some good touches and made some good runs, but nothing came off for him today. His progression as an Everton player has been truly outstanding, and even when he isn’t on the scoresheet, his all-around play has improved dramatically. More good things to come.

I thought Alex Iwobi was alright after coming on for Gylfi Sigurdsson, but almost anyone is an improvement in that situation. He played on the right-hand side, as James Rodriguez moved into the midfield three, and the Nigerian looked lively.

I usually don’t grade players who play for such a small amount of time, but Cenk Tosun was truly awful after coming on late in the match. He replaced James, who could probably have one of his legs amputated and still be a better passer of the ball. I think this is all summed up by the text my friend sent me, which read “Has Tosun had a single touch since coming on that wasn’t shit?”. Enough said.