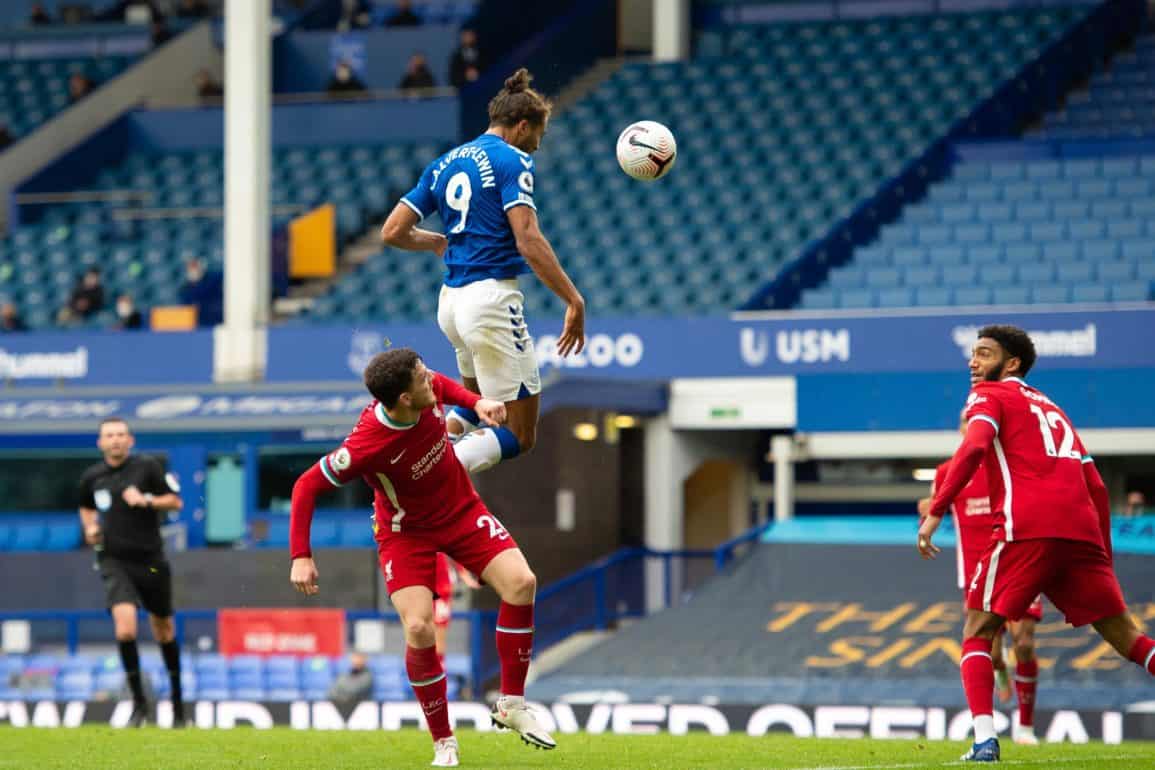 Beating Liverpool? It feels like it’s been longer than a decade, if I’m being honest.

A squall of three letter words came out of Saturday’s derby. Some prompting a tearful stream of four letter words from our red friends.

I was listening to a podcast last week and the Blue Room’s Matt Jones said that he feels like Liverpool get write the script to derby games. It’s true. Last minute winners, rank humiliation, total dominance, even their kids have beaten us.

This time we took that script, and made some last minute edits.

Is there anything better than watching Dominic Calvert-Lewin soaring over defenders’ heads? Saturday saw another skyscraping header from Dominic Calvert-Lewin as he dunked (or should it be Dunc-ed) on the Liverpool defence. Comparisons with Big Dunc abound, but DCL is a different beast. We’re only five games into the season, and he’s already outscored Duncan Ferguson in all but two of the seasons that he played for us.

We don’t really know who to compare him to, because just like our league position right now, this is quite an unusual experience. The last time a striker of ours scored in their first five league games it was 1938…

Underneath the centre parting and lashings of Brylcreem, lay an instinctive goalscorer. So prolific was Lawton that it seemed as if he had dipped his feet in gunpowder; including war fixtures, Lawton scored a ridiculous 222 goals in 209 first team games. Tommy refused to be bowed by the pressure of filling Dixie’s boots, and is only bettered by Dean as Everton’s greatest striker.

To have DCL even mentioned in the same sentence as Lawton is remarkable.

We already know that VAR, and its implementation, is a joke. We’ve been screaming this until our faces are as blue as our shirts… More often than not the joke has been on us.

Only now though, is VAR truly a joke. Now that the champions have seen the champagne dashed from their lips. Now, finally, we can all agree that VAR needs to be changed, now that it ruined the reds’ day.

It was fine when they were LiVARpool. Funny that. One game, and now we’re EVARton…

Last season they basked in the bullshit of VAR decisions. VVD’s hand during the build-up to a goal? Nah, forget about it. Salah diving like it was going out of fashion? Totally fine. Last season they were wind assisted by the hot air coming from every commentator and pundit.

Us? Dele Alli’s handball, Michel Keane treading on a heel, goals bouncing in off defenders but being ruled offside.

Only now, now that the champions have been on the receiving end, do the pundits really care. Funny that.

And Saturday was funny. Exceedingly funny. Funny, that their last minute winner was chalked off and I still don’t really understand why. Funny, that the man who they wrote songs about, after his flap and Origi’s excruciating winner, is now the lad they want to have banned.

(And can Liverpool ever get into a “who was harder done by” argument with Everton regarding bans?)

D’you think Liverpool fans were tempting fate JUST a tad when they gloated, sang, and guffawed about that Origi winner against Pickford?

They even wrote an extra few lines to Merry Christmas Everton, just to commemorate it… Do you think Karma was woken from its slumber by that catchy number?

(Speaking of songs, didn’t they once sing about Seamus Coleman’s broken leg?)

Now, thanks to more wind assistance from the tv pundits, Jordan Pickford is a devious and violent mastermind who wanted to end VVD’s career. VVD, by contrast is a saint.

Nope. Not having it.

There’s little forethought in anything Jordan Pickford does. He’s a CatDog. His feline reflexes – swatting at everything that comes near him (that save from Matip almost turned me into a believer again) – combine with the fact that he charges after balls like a dog who’s sprung his leash. No, premeditation isn’t something Jordan Pickford is capable of.

Jordan Pickford is a big tub of Mackem Marmite at the best of times, and I think he needs to be replaced, but he’s no psycho killer whose horrific behaviour needs to be punished. He went for the ball and missed it. You can’t say that he doesn’t have an extensive list of mishaps in that department.

And what of Saint Virgil? He was smashing Everton players all over Goodison Park in the first few minutes, a fact acknowledged but shrugged off with a chuckle by commentators. “Ho ho ho, it’s the derby after all!”

Liverpool and their acolytes can’t do nuance. The fact that VVD has been known to do a passable JCVD impression himself in past matches is now instantly forgotten.

It’s sad that a professional will be out for 8 months. But you’re not getting an apology out of us. We took a point from the champions. We got lucky with decisions. But to say that Liverpool haven’t been the recipients of luck in the past would be a lie. I can’t be arsed to type, and you can’t be arsed to read the exhaustive list of the times Liverpool players have got away with dodgy tackles, or the multiple occasions that Liverpool have been helped out by the ref. It’s pointless to list them, it won’t snap the reds out of their collective amnesia, nor will it make them see sense. (If I had to pick one from each category it would be Dirk Kuyt’s “tackle” on Phil Neville and when Graham Poll disallowed Don Hutchison’s goal and claimed he blew for full time…)

They’re angry because, to them, this draw feels like a defeat. A defeat worse than last week’s spanking by Villa, with long lasting consequences.

VVD’s injury was unfortunate. Pickford’s tackle was reckless. But getting lucky? Taking advantage of poor VAR implementation? No apologies for that. It’s done. Looking forward to Southampton. COYB.