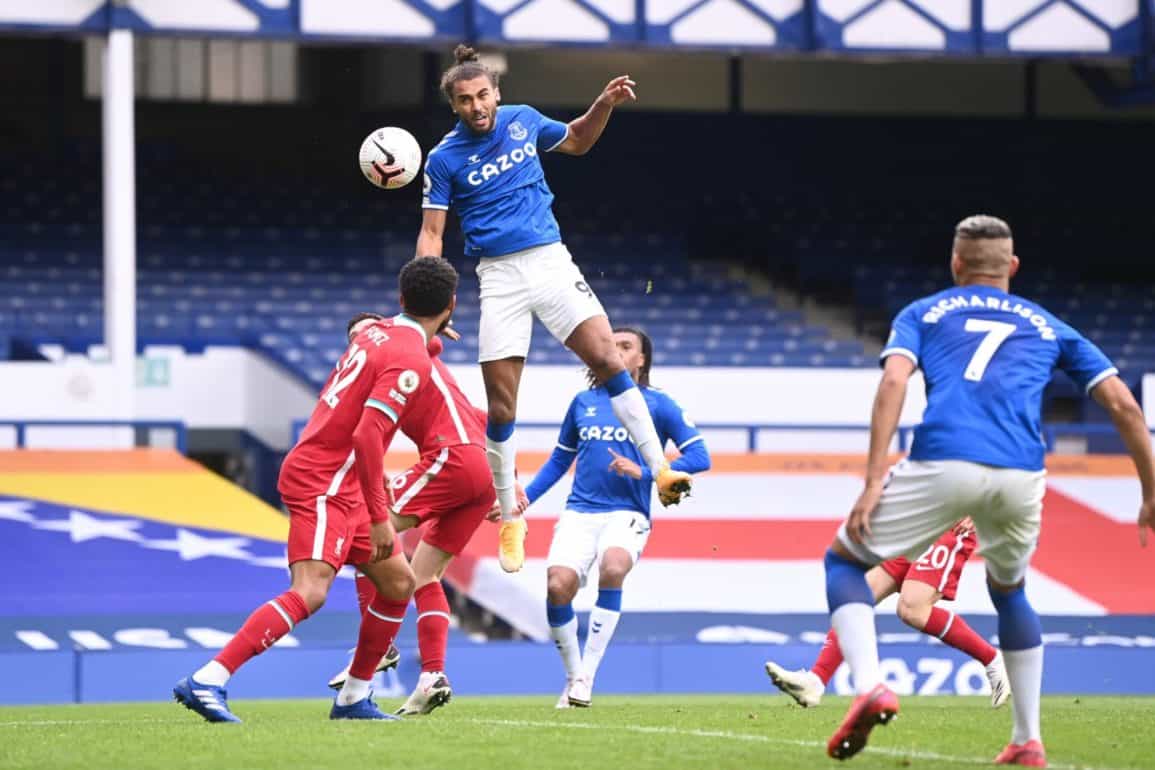 Richarlison sees red as Blues fightback twice for a point

A less than convincing showing from the Blues in a fiercely contested ‘derby’ saw them fight back twice from a goal deficit in headers from Michael Keane and Dominic Calvert-Lewin however the game was blighted for a red card for Richarlison in the dying minutes.

Two weeks have passed since the Blues opened up a three-point lead over the Premier League pack, two weeks that have seen Dominic Calvert-Lewin make an impressive, scoring debut for England but, now we’re back to the main event and a ‘derby’ the world of football was eager to witness as the leaders hosted the defending champions.

Blues boss Carlo Ancelotti looked forward to the encounter in a positive frame of mind when he noted, “We have to be focused to do our best, excited and happy to play our game, we don’t need to have pressure, we want to play the best game we can play. All the games are difficult. This is more difficult because we are going to play against the team that won the Premier League last season. It is a derby, and they are a quality team.”

With many of his squad having been on international duty this week, the Godfather briefed the media as to the availability of playing saying, “Andre Gomes is available for Saturday, no problem. Allan started to train with the team this week. If nothing happens in the next few days he will be available to play against Liverpool. I think Seamus is going to be good, too, because he started to train with us on Monday.”

As to the long-term injuries he added, “Holgate and Branthwaite are working individually. Branthwaite is closer to returning. They have no problems [in their recovery programmes] but we have to wait a little bit. Gbamin is working individually, he is not here [at USM Finch Farm] yet. I think he is going to be here in 15 days and start to work apart from the team in the beginning, and then with the team. At the end of the November, I think he can be fit to play.”

For the visitors, manager Jurgen Klopp admitted the aftermath of the drubbing his team endured at Aston Villa gave him ‘a very unpleasant evening’ and he advised having waited till the following morning before sending all his players a ‘long, long text message’ upon which to reflect.

Klopp was magnanimous when he spoke about going up against Carlo Ancelotti again saying, “Top team, top manager. What I think about Carlo Ancelotti was never a secret,” Klopp continued. “I couldn’t respect him more as a person and as a coach. He’s a wonderful human being, to be honest. I knew from the first day when I heard that he will sign for Everton, I thought, ‘Ah, the next proper challenger in line.’ Now I think they did perfect business in the summer. They found pretty much exactly the players they needed to improve an already pretty good football team. Together with being more used to what Carlo wants them to do makes them a pretty strong team. I’m really not surprised about the way they play.”

On the injury and illness front, the German was again unable to call upon his number one goalie Alisson so former West Ham keeper Adrian was the first name on team sheet. Matip was due to return from injury while Sadio Mane and Thiago were expected to return following ten days of self-isolating due to testing positive for coronavirus.

For this televised lunchtime kick-off, our referee was Michael Oliver.

An early bodycheck from van Dijk on James inside 60 seconds would have had a full house Goodison baying for blood had we been there and just over a minute later, the ball was spread wide left to Robertson and his ball into the area saw Mane give Pickford no chance with the crunching finish into the roof of the net.

Excellent defending from Digne to deny Henderson getting on the end of a ball from Mane conceded a corner that saw Pickford clatter into van Dijk. VAR reviewed the incident looking for offside or a penalty, the decision going the Blues way while van Dijk received treatment. Liverpool were forced into an early change, Gomez replacing van Dijk on 11 minutes.

The Blues first real attempt came from a super cross from the left by Digne that DCL got on the end of but couldn’t get his header down and on target. Pickford with a decisive punch to clear a deflected Firmino shot as the visitors looked to add to their lead.

Everton hadn’t really got going in the opening quarter hour, the midfield not as involved (yet) as in earlier games this season. Rodriguez threaded a ball through the Liverpool back line but it was too close to Adrian. Everton won a corner as DCL fired in a shot from a tight angle that Adrian pushed behind and from the corner, the ball was swung in by Rodriguez and Michael Keane rose to power his header through the hands of Adrian for a 19th minute equaliser.

Mane went down feigning injury from a high boot from Andre Gomes that clearly didn’t connect, the free kick went the RS way and Pickford made a fine save to turn a shot from Alexander-Arnold away for a corner that was easily dealt with.

The Blues still weren’t playing with any real rhythm in their game, Richarlison seeing very little of the ball on the left and Rodriguez firing on all cylinders. Seamus Coleman went down on the half hour mark with what appeared to be a recurrence of a hamstring strain and reluctantly left the game to be replaced by debutant Ben Godfrey.

Henderson spread the ball wide for Mane and he fed Thiago for a shot that flew wide of the target. The RS carved out another opening down the left again, Firmino finding Robertson to cross into the path of Mane who saw his side foot shot slide across the face of goal and wide.

A free kick against Allan for a foul on Mane saw Mina block a Salah shot away for a corner that was defended well, Robertson clearly pulling the shirt of Rodriguez as he looked to break away. Disappointingly, it was still Liverpool enjoying the better and more productive possession, Carlo Ancelotti would surely have been preparing his half time team talk to address the midfield not competing and giving the ball away far too easily.

A chance created by Doucoure saw him fire a ball into the area that DCL got a touch on that took it away from Richarlison arriving at the back post. An excellent run forward by Godfrey saw him beat two players before finding Richarlison only for the shot from the Brazilian to be way off target.

James Rodriguez was booked for a foul on Mane just outside the Everton area as four added minutes were signalled. Mina with a good header and Godfrey with a block cleared the danger, Everton getting down the other end to eventually win a corner as Adrian pushed a Gomes cross behind.

The Michael Keane header was about the only plus point for the Blues from a first half in which, being truthful, Everton had been largely second best – lots to improve upon in the second half.

No more changes by either manager for the second half as the Blues kicked off attacking the Gwladys Street End of the Grand Old Lady.

Liverpool with two early efforts, Fabinho and Henderson both firing over the bar, early warnings for Everton to tighten up around the edge of the area. Rodriguez fired a great ball across field and out to Lucas Digne and his instant ball into the area was perfect for DCL only for him to completely miss his kick when a goal looked a certainty.

Allan and Robertson collided in midfield, both needing treatment before carrying on. Everton still were nowhere near the fluid best of recent weeks, even Lucas Digne firing stray passes to cough up possession when trying to release Richarlison.

Some good possession at last for Everton and a number of crosses led to Keane finding Rodriguez for a sweet cross to the back post where Richarlison arrived only for his short range header to come back off the post.

An hour gone and the game was poised on a knife edge, Digne getting back to concede a corner that saw DCL head clear before the next Everton move again saw Gomes play a loose ball. Gomes redeemed himself moment later feeding Rodriguez into space to bend a low shot that Adrian pushed away for a throw-in.

Mane was booked for a crude challenge on Lucas Digne on 66 minutes and two minutes later Gomes too picked up a yellow card for a foul on Fabinho.

In the 72nd minute though, the visitors regained the lead, as a poor clearance from Mina from a Henderson cross fell perfectly for Salah to lash home and give Pickford no chance.

Carlo Ancelotti reacted by sending on Gylfi Sigurdsson at the expense of Andre Gomes, hoping the Icelander could boost the attacking options from the Blues midfield.

A long ball from Keane found DCL only for Robertson to get back and clear ahead of him getting back to deny Salah another shooting opportunity. Pickford with a stunning save denied Matip from the resulting corner kept the deficit to just one goal.

Salah found by Fabinho was again denied by Pickford with another smart save ahead of the Blues hitting back again on 81 minutes. Rodriguez threaded a ball down the line for Digne to cross perfectly for Dominic Calvert-Lewin to climb, climb and climb again to plant a superb header into the corner of the Liverpool net.

With seven minutes to play, Fabinho caught Rodriguez who was clearly unhappy. Allan saw yellow for what I’m not quite sure as the game became frenetic, both sides looking for a late winner. Controversy in the 88th minute as Richarlison and Thiago crunched together and Michael Oliver immediately pulled the red card from his pocket for the Everton player.

Five added minutes were signalled and Liverpool with the extra man poured forward for a winner, Jota and Mane getting in each others way before Henderson slotted home a pass from Thiago only for VAR to rule it out for offside against Mane.