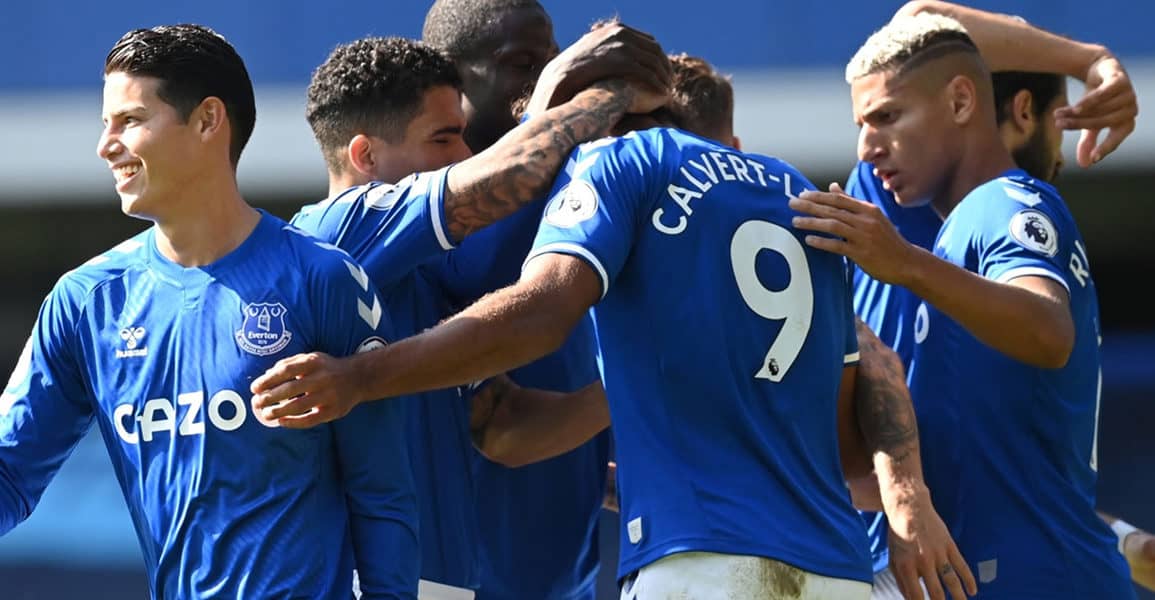 We Hate It When Our Friends Become Successful

As the window slammed shut and 7 games have been played, Everton find themselves in the somewhat unnerving position of being 3 points clear at the top of the league, into the quarter final of a cup competition and having completed transfer business which seems to have been met with universal support and subsequent on field validation. The contrast to the pitiful end to the previous season could not be marked, and for the majority of the fanbase there is a slightly dream line utopia to what has just happened. A core part of Evertonianism, in as much as it exists is the dangerously entrenched belief that good things can’t happen to us. Even myself, a somewhat optimistic Evertonian is having to privately caution myself on writing a roundly bolshy analysis of the summer window and the season to come. The club has got itself into a position that is scarcely believable.

One obvious lesson from this is that you are never quite as far away as you think. It’s probably a lesson we would do well to heed. The famous 1984/5 all-conquering team were also rans 18 months previously. No matter how far you feel like you are away, you are nearer than you think. All you can focus on is the next big decision you have,

The summer window feels a significant and important validation for Marcel Brands. At the start of the summer I ran a twitter poll which showed an approval rate in the mid 60’s. A much bigger sample on this website indicated he was as low as the high 40’s. While this by no means a vote of 0 confidence in him, at the end of last season he was a man under pressure to deliver. In truth not just the signings he’s made, but the way he has negotiated and revamped the squad for under £70m is little short of astonishing. He has been helped of course by having a high profile manager alongside him, but he has been able to work with the manager to deliver on the goals the club needs.

I have touched upon in my previous article Lift Off the skills of the first 3 big signings so won’t spend much time on this. Niels Nkounkou and Jarrad Branthwaite, both recruited for look extremely promising for players who are just 18 and 19 respectively, and fit the profile of recruitment which will almost certain gather substantial value over the coming years. Ben Godfrey also has a unique profile of a young man who is around 6 ft 1, with an eye catching muscular build which aids his speed across the ground. He is also very comfortable on the ball. That combination of power and finesse is not massively common, and while he is very ropey at some of the basics of defending (tackling, interceptions, clearances etc) the gamble must be the raw ability and physique he has is much harder to find than more elementary defending is to teach. His versatility, being able to play in midfield and at full back could prove invaluable as we begin to trim the squad. So while there was a substantial initial investment in him, he has the raw ingredients to be a success at the club.

The final, and perhaps most underwhelming deal of the summer was goalkeeper Robin Olsen. In a lot of cases it was met with disappointment and borderline bemusement. The main sentiment appears to be why couldn’t we have found a more natural option to be a number 1. I have sympathy with the club. They had obviously taken the decision that Pickford would be the number 1 this season. Having made that call, with 2 days to run in the window, and scouting around primarily for loans, it’s really very difficult to see too many options that are eye catching. This plight was made harder when teams in our own division changed stance to view us as a threat, and would not sanction loan deals for their unwanted players. For me, Olsen is an improvement on Lossl and is a viable alternative to Pickford this season if his form does not pick up. My instinct is that Ancelotti demanded such an alternative following the mistake in the Brighton game, and he may be more open to dropping Olsen in than some in the wider press think.

The league itself is looking more open than it has in 3 or 4 years. I had speculated in previous pieces that both Manchester City and Liverpool’s dominance of the league could not last much longer. Both clubs found themselves in the top 6 or 7 teams for oldest players. That, alongside teams beginning to find chinks in the quite bespoke nature each side set up meant that at some point the eye catching performance’s would begin to regress back to what might be called a mean finish. I sense Manchester City are a year further along than where Liverpool are. Arsenal, Tottenham and Chelsea look to have strengthened while United have shot themselves in the foot somewhat. It all hints at a more competitive league. Below the top 6, Leicester, Wolves and Aston Villa have all made decent starts, and Crystal Palace/Brighton and Leeds look like they could cause better opponent’s problems. So I sense a league that is more congested from top to middle, with perhaps the bottom 2 or 3 teams getting cut adrift.

As for Everton- there have been few more impressive starts. We have an aggregate of 24 goals for, 8 against from the opening 7 games. The last time we won 7 straight games was the 1890’s and of the last 3 occasions we started with 4 straight league wins we finished 4th, 1st and 1st. It gives some relevant context to the start that has been made. Some sides will win their opening 2 and struggle, a handful may win 3 and struggle but very few start with 4 wins and end up finishing a long way down the league. As always there are some important caveats to add, namely on the last 3 occasions we won our first 4 league games (1978, 1969 & 1962) the previous season to that we finished in 4th, 3rd and 4th, so had a team that was already competing at the top end of the table. Last season we finished 12th, so it is a marked jump up. That being said, the omens are broadly very positive and when taking alongside the performances in the league cup are grounds for cautious optimism.

While there will be far more bespoke and worthwhile previews of the derby game, for Everton it’s a very significant one. While 4 wins to start a season is impressive if you start to match 5 and 6 straight wins you begin to cement yourselves as a legitimate challenger for the title. As things stand Everton are currently joint 4th favourite for the title (not something I can ever really remember in my time following the club) and a win in the derby would likely see that shorten in to being a 3rd favourite.

After the 1st couple of games this season I spoke to a good friend, and Manchester United fan, and asked him, how many games would Everton need to win consecutively at the start of the season to be considered a title contender. He kindly told me why we were not a title contender (mainly based around Pickford being a liability) but when pressed on how many games we would need to consecutively win in order to change this view he answered “5-you need to win the derby” before helpfully adding “your record isn’t very good against them is it”?

It is not just the significance of the 5th straight win, but it would an enormous boost of confidence is Everton could defeat the all-conquering Liverpool team. Even if it may not get acknowledged in the wider media (I sense it would) privately for the players and particularly coach Ancelotti you sense it would feel a totemic result and underline the sense that a new mentality is emerging under his guise.

There was a question posed in one of the many interesting Everton related podcasts about Ancelotti has to manage going forward now we are found in this situation. Andy understandably said he needs to manage block of games, and aim at a certain level of points per game. At this stage, I don’t see that. I sense Ancelotti will take each game as it comes, and try to avoid Everton players getting ahead of themselves. With each win that comes, confidence grows and performances begin to get more honed. The players are beginning to learn the habit of winning and keeping things as simple as possible with each game makes the most sense. Whatever the result in the next game, I sense Ancelotti will try to take each game as it comes.

On this sites Podcast (with Max Carlyle and Andy Gray) Gray rightly noted the point that it is a case of “when” not “if” we lose a game. We have to accept that and it is worth acknowledging this now. This team will lose games. It may even lose the derby but what is critical is the response to this. As fans we have a part to play in this, in trying to avoid overblown conclusions and to place results within the context they sit. If we lose the next game, our worst case scenario is that we are joint top of the league. Best case scenario is we remain top outright. We would have all taken 12 points from 5 games (from a series of fixtures we picked up just 8 in in the previous season).

The side to me has all the hallmarks of a team that could do very well, with one possible exception (the goalkeeper). The centre backs are well balanced and 2 of them look as if they can chip in with important goals. The fullbacks are solid defensively and in Lucas Digne offer an attacking threat. In midfield we are combative and we have great balance, variety and goals across the front 3. At this point we are probably a top goalkeeper (or an emergence of Jordan Pickford) away from challenging at the top end. It’s not inconceivable that the penny drops for him, though at present it appears more unlikely with each passing game.

So for Evertonians up and down the country, enjoy it. These are very much the good old days. Ride the wave and lets enjoy seeing where the journey takes us.