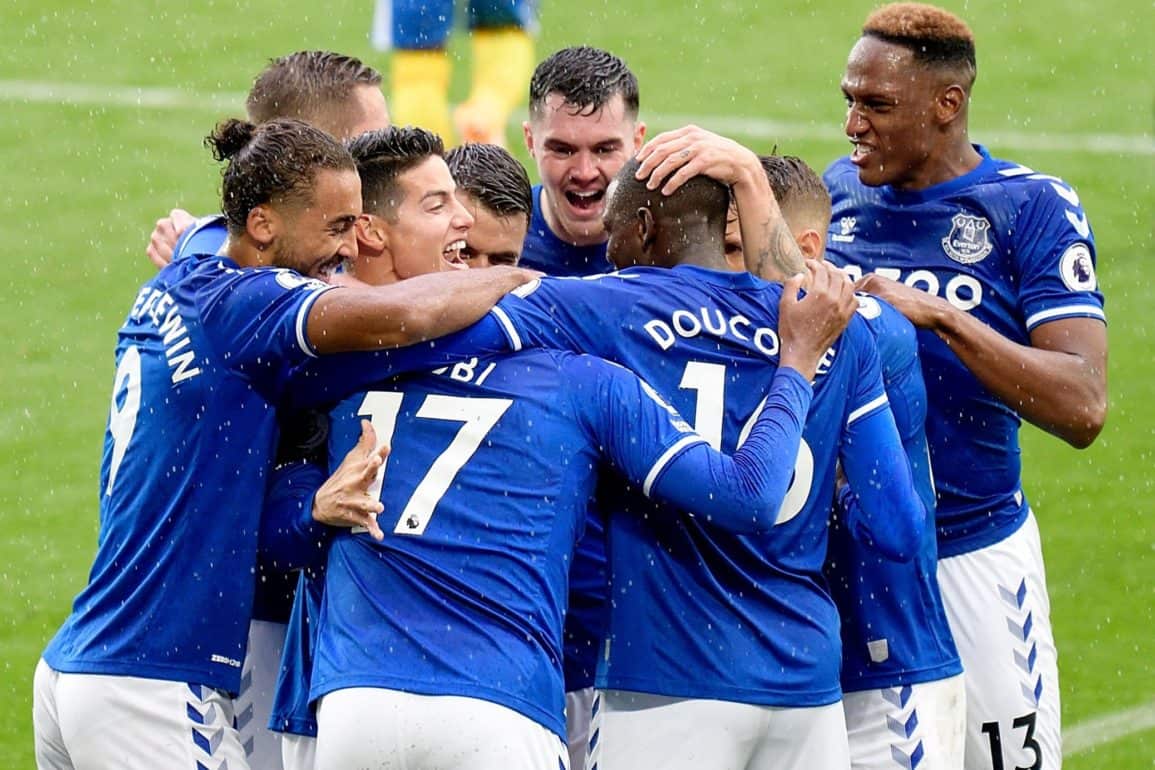 Everton’s dazzling start to the season continued today at Goodison Park with a 4-2 victory over Brighton, extending Everton’s winning start to 4 straight games in the Premier League and 7 in all competitions.

It was not Everton’s best team display, but they still managed to score four and take all three points, which is a mark of a good team. Two of our three starting midfielders did not play and Richarlison was forced off early after exacerbating his ankle injury from Wednesday.

However, the Toffees found a way to win despite adversity, which is an encouraging sign of the new mentality that Carlo Ancelotti has brought to Everton Football Club. Here are my player ratings from Everton 4-2 Brighton.

The match reports from today will yet again discuss a big error from Jordan Pickford in goal. He fumbled a tame effort from Leandro Trossard in the 41st minute which led to Neal Maupay’s equalizer. One wonders how much longer Pickford can continue his dreadful run of form before his place in England XI is threatened. He was a bit more assured in the second half, but it was a very poor mistake in the first half that seals his fate in my player ratings. He simply has not good enough so far this season, and there is nowhere for “England’s Number One” to hide.

I thought Seamus Coleman was very good again today before he was forced off due to an inconspicuous knock in the second half. He marauded down the right as he usually does, impressing with a few fantastic turns and composed passes, such as when he was cornered by two Brighton players by his own corner flag yet still managed to find a perfect pass that led to a lovely passage of play and a half-chance on the Brighton goal. I sure hope he will recover in time for the Derby, as I think I’m not alone in saying I’d rather not see Tom Davies at RB.

Michael Keane’s performance today was not very notable. It was Yerry Mina yet again that stole the show defensively. Looking back on his game now, all I can think of is Micheal Keane letting Neal Maupay’s equalizer trickle through his legs on the goal line. It’s not like Micheal Keane was awful today, he just wasn’t particularly good. Maybe I’m being harsh, though.

Yerry Mina was absolutely superb today. Goal aside, he was incredible at the back, making several goal-saving tackles, blocks, and headers, the most poignant of which were when he stooped and put his body on the line to nod the ball over before Dunk inevitably hit the back of the net and his incredible late block on Trossard to spare Abdoulay Doucoure’s blushes. Add to that the fact that he absolutely dispatched a header into the bottom corner in first-half stoppage time, and Yerry Mina is very unfortunate not to be Man of the Match. Unluckily for him, there just happened to be a certain compatriot of his stealing the show going forward.

Similar to last week, it wasn’t a vintage performance from Lucas Digne, but nonetheless, he was very solid defensively and got into some good areas. His link-up play with Iwobi, and lesser so Richarlison before his substitution, was as consistent as ever, and he remains a key part of Everton’s success as of late. The conditions may have not suited his attacking forays quite as much, but he did his job well defensively and will now meet up with the France squad during the international break. Job done.

Gylfi Sigurdsson has not been receiving his usual amount of criticism recently, and that’s because he’s actually been playing pretty well. He had the assist on Calvert-Lewin’s opener with a fantastic left-footed cross to the back post and was sure on the ball throughout the game. That being said, I still think he is a downgrade on Andre Gomes, who when fit, is the best player in our squad for that free-floating role in the midfield three. Having a 45 million pound player as a back-up in that position is a real plus for Everton, though, and that contributes to the impressive squad depth currently being displayed by the Toffees. Overall, a reasonably good game for Gylfi Sigurdsson.

Doucoure made his mark for the first time in Everton colors, getting the assist on James’ second goal. He and Tom Davies blazed around the midfield in the first half, and Doucoure was seemingly everywhere at times. That being said, his level dropped off in the second half, assist aside, and he made an awful error that Yerry Mina somehow managed to atone with a goal-saving block on Leandro Trossard late on. Doucoure has been a key addition to Everton’s new-look midfield, but he needs to cut out these errors in order to really push on. Nonetheless, it was a good performance from the big Frenchman.

Tom Davies’ energy was as apparent as ever today, and he did well to adapt to playing right-back for the final 30 minutes after Seamus Coleman was forced off. I thought Davies was alright, but we clearly lacked the presence of Allan, as Brighton dominated during extended periods of the first and second halves. Davies did what he needed to do though and on top of a few great sliding tackles, he made a fantastic block on Neal Maupay to deny him a goal that would have made it 3-2. Tom Davies did well filling in, but I will not be sorry to see him return to the bench after the international break.

What is there to say? Before his move to Goodison Park, questions arose regarding James’ grit and whether he could perform on cold wet English nights. Today he answered those definitively. James applied the finish to two devastating Everton moves, as well as providing an absolutely perfect free-kick delivery which Yerry Mina thumped into the side netting on the stroke of half time. James absolutely ran the show, showing his ever neat passing and quality on the ball, including two irrefutable finishes he was never going to miss. It still boggles my mind to think that Marcel Brands managed to capture his signing for free, and whatever pay packet he is receiving has been well worth it so far. What a player. Man of the Match.

It was unsure whether Richarlison would play today after being forced off due to a twisted ankle midweek. He looked his normal self in the opening 25 minutes; direct and positive. He drew many fouls as usual, and that ended up being his undoing, as a tackle by Tariq Lamptey seemed to aggravate that ankle injury, and Richarlison was subsequently replaced by Alex Iwobi. He walked straight down the tunnel. He may have been able to continue, but I think it was the right move by Carlo to preserve him, as he will be desperately needed against Liverpool in two weeks. Let’s hope he can make a full recovery over the international break.

Another game, another goal for new England international Dominic Calvert-Lewin, who continues his white-hot run of form. He rose above the Brighton back-line before heading home Gylfi Sigurdsson’s left-footed cross after a short-corner routine. It was a fantastic header which left Mathew Ryan no chance. He was relatively quiet otherwise but could have definitely scored in the second half if Theo Walcott had picked the right pass. DCL has now scored in each of the first four Premier League matches of the season and has scored 6 in that time. It truly has been an unbelievable start for the 23-year old, and I think it’s safe to say that Evertonians everywhere will be delighted for him when he hopefully makes his England debut next week. Well deserved.

Alex Iwobi was forced to come on pretty early in the game, and it took him a while to really get into the game. I thought he was relatively poor for a while and even tweeted about it literally seconds before his brilliant assist for James’ first goal. He also played a fantastic ball into the box for Doucoure, who assisted James’ second, and so Iwobi did end up having a big impact on the game. It’s never easy to come off the bench and play in conditions such as the ones we saw today, and despite taking a while to get into the game, he showed his quality and continued what has been a decent start to the season for the Nigerian.

I was surprised to see Fabian Delph’s name absent from the starting XI today, but he came on for Seamus Coleman and slotted straight into a deep-lying midfield role. I didn’t think he was particularly good, as, despite a few neat passes, he seemed to get overrun by the Brighton midfield during his time on the pitch. Brighton really started dominating when Delph came on and Davies was moved to right-back. It was an uninspiring performance from the veteran, in my opinion.

I don’t really have much to say about Theo Walcott, other than that the gulf in quality between him and the man he replaced was outrageously obvious in the last 10 minutes. He could have had an assist if he had rewarded Calvert-Lewin’s lung-busting run on the counter late in the game, but he passed Iwobi into the trouble and the move broke down. Theo Walcott was really only there to give James’ legs a rest.