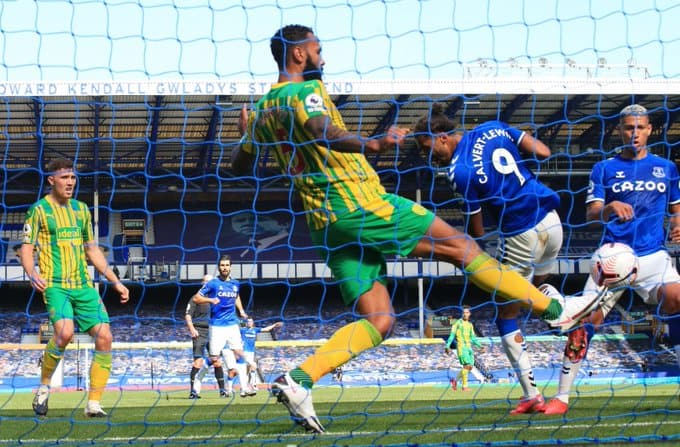 There wasn’t much to note from Jordan Pickford’s performance. He potentially could have gotten something on the first goal from Diangana, but his defenders let him down really. The freekick was an absolute beauty, and it took a slight knick off Yerry Mina’s noggin, so I can’t really fault him for either of West Brom’s goals.

Among a game full of superstar performances, Seamus Coleman’s performance wasn’t one that caught the eye. He was caught out of position on West Brom’s first goal but otherwise wasn’t particularly great or particularly disappointing. A decent shift from the skipper.

For me, Yerry Mina was Everton’s worst player today. The first goal was a result of very poor defending from the big Colombian, who failed to step forward on Grady Diangana while he had the chance, therefore giving him the space to fire a dipping strike past Jordan Pickford. I also should note that he did not jump while in the wall for Matheus Pereira’s freekick, and if he had, the ball certainly would not have arrowed into the top corner. Not King Yerald’s best day.

Despite looking a little bit shaky at the back, Micheal Keane ended up being the match-winner today for the second game running after heading home the first against Salford midweek. He cleaned up the rebound of Richarlison’s header and for that reason, I can’t give him anything less than a 7. I’d love to see Big Mick Kegger continue to get his name on the scoresheet.

Lucas Digne’s delivery was a bit off today, despite the fact that his freekick led to Michael Keane’s eventual winner. His corner taking, specifically, was wayward, as there were multiple times in the first half that he hit the first man, before then sailing the ball over everyone on his next attempt. James took over corner duty in the second half for a reason, and that led to DCL’s third of the game. Not the greatest day for Lucas Digne, but not awful at all.

I personally don’t think Abdoulay Doucoure was nearly as effective in this game as he was against Spurs. Especially during the first 25 minutes, Everton were being overrun in midfield, leaving the back four very exposed. Diangana’s goal on the counter was a result of that. Doucoure is undoubtedly a very shrewd addition to Carlo Ancelotti’s side, but I expect better from him than what he put out today.

Allan kept the tempo in Everton’s midfield today, and was much, much better in the second half than he was in the first, probably partly due to the fact West Brom were down to 10 men. In the first half, he seemed to push too high up, and the backline was left vulnerable to onrushing Albion attackers. I’m sure Carlo will ask him to be more disciplined in the future, but it was still a very decent performance from Everton’s new midfield pitbull.

Andre Gomes looks like a new player now that he has two strong partners in midfield who are capable of covering for him and winning the ball back. He has the freedom to pick pretty passes and feed the ball into attackers in good positions to shoot or swing in crosses. However, he did get caught on the ball a few times, most notably when he lost possession at the beginning of the second half, forcing Allan to foul Matheus Pereira, who banged the subsequent free-kick top bins. Nonetheless, Gomes still looks to be a player revitalized.

When I saw Banfield’s tweet about James’ move to Everton being a free one, my jaw dropped. This is proving to be an absolutely unbelievable signing by Carlo and Marcel. James’ quality yet again stole the show today, as he scored an absolute peach of a goal in the 45th minute to give Everton a 2-1 lead. In the second half, he lofted a beautiful pass into the path of Richarlison, who set up DCL for a tap in, and the Colombian also delivered a beautiful ball from the corner flag which was nodded home by Calvert-Lewin for his hattrick. What a player, what a performance, James Rodriguez.

This one is quite self-explanatory. Dominic Calvert-Lewin scored a fantastic number 9’s hattrick today and has made a quite talismanic start to the season. He improvised incredibly well to back-heel Everton’s equalizer into the net in the first half, before sprinting into the box in the second half to tap in Richarlison’s cross, as well as scoring a great header from a corner to complete his hattrick. He is the first Everton player to manage one since Wayne Rooney’s treble against West Ham in November of 2017. Yet another fantastic performance from the 23-year old, and the match ball to go with it.

Although he failed to get on the scoresheet again, Richarlison was instrumental in Everton’s menacing attack today, registering 3 assists and playing a key role in build-up going forward. His work rate is superb, and it should not be understated how important he is to Carlo Ancelotti’s side. even when he doesn’t manage to score. Richarlison is a shining star in this team, and I don’t see that changing anytime soon.

Despite getting into some good positions, Alex Iwobi’s final ball was lacking a bit today, but after all, it is his first match in quite a while after recovering from a knock just a few days ago. Overall, it was encouraging to see the situations he managed to get himself into, but his end product let him down, and not for the first time.

I actually think Gylfi Sigurdsson was quite good today. He picked up where he left off in the Salford City cup tie and whipped in an absolutely delightful cross that Richarlison smashed into the top right corner, but the goal was unfortunately ruled out as the Brazilian made his run just too early and was caught offside. Sigurdsson’s passing was sharp and he actually passed the ball forward on quite a few occasions! An improvement from the end of last season, for sure.

I don’t think I can quite judge Moise Kean’s performance, after being on the pitch just 12 minutes plus stoppage. He was very positive and direct, running at the full-back quite a few times, and seemed no short of confidence when attempting a rabona cross that was blocked. He was also playing out of his normal position on the right-hand side, so I won’t give Moise Kean a grade, but I do like the mentality he had while on the pitch.