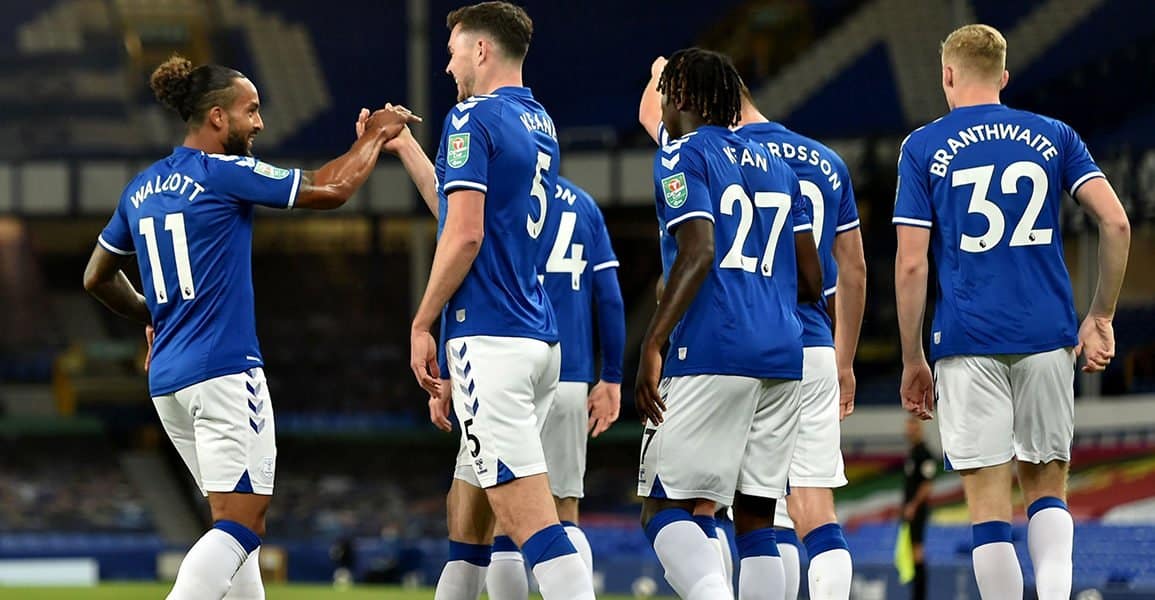 Everton eased their way past SalfordCity and into an away trip to Fleetwood with a calmly dominant and in the end convincing performance that saw an impressive debut for Niels Nkounkou and Anthony Gordon lively throughout the ninety minutes.

Carabao Cup action at the Grand Old Lady pitched Don Carlo and our new look Blues against the Class of 92 supported Salford City, sadly with no crowd in attendance to welcome our three new players to their new home.

With the prize for victory being a third round tie away at Fleetwood, the Blues England defender Michael Keane set the tone for the game against Salford when he said, “Performances and results like we got against Spurs mean nothing unless you go and back it up the week after and the week after that. We have Salford on Wednesday, and on paper, we should be winning but if your mentality is not right, they become tough games. We have to make sure we are on it, we have already spoken about that – and we will be. We want to finish as high as possible in the Premier League but, we also want to get on a good cup run and see if we can win something. They are lower league opposition but it is still a huge game for us.”

With Mason Holgate ruled out for at least eight weeks with the toe injury suffered in pre-season, it seemed likely that manager Carlo Ancelotti would retain Keane and Yerry Mina at the heart of the defence, to build and strengthen their partnership understanding. Whether our Italian maestro would make changes to the side that comprehensively dealt with Tottenham on Sunday remained to be seen but, the TV audience – especially the new-found Blues fans in Colombia and Brazil – were eager to see more of Allan, Doucoure and James Rodriguez.

For Salford City a visit to Goodison Park and becoming the 151st different club the Blues have faced was something of a milestone for the club that came into being in 1940. Now supported by former Manchester United players including the Neville Brothers, Ryan Giggs, Paul Scholes and Nicky Butt, the club nicknamed The Ammies have gone from strength to strength in recent seasons and now proudly reside in League Two, the old Fourth Division, where they claimed their first point of the new season from a 2-2 tie with Exeter City last weekend.

In charge of the first team is a wily campaigner in Graham Alexander and the former Scottish International looked forward to the tie when he commented, “It’s a massive tie in the size of the Club we’re going to play, the venue, the history of Everton is so famous and prestigious, so from that point of view it’s a great tie for us because there’s absolutely zero pressure on us and the players to go there and win because the gap in the level that they play at compared to us is massive. But we’ve got to go there and enjoy ourselves, and actually hold our heads high, show pride in our work, show that we are good players and that we are a good team.”

He continued, “That’s the thing about this game, I know there’s no pressure on us but I know that in ourselves we put pressure on ourselves to perform well all of the time including in training and any game we play, so from that side of it the players have got nothing to lose except to go out there and show what good footballers they are. We know it’s a massive task for us to go and get a result, but we go there with belief in the way that we play, what we have in our own changing room and take the game on, but we have to look forward to it, it will probably be one of the only times this season that we’ll be the underdogs so we have to enjoy that status.”

In charge of proceedings on a cool evening was referee Marc Edwards.

Salford absorbed some early Everton pressure before breaking down their right and eventually seeing a shot fired high over the bar. Bernard with a cross from the left found Walcott in the area, his header beating the hesitant goalie but also clearing the bar.

A good turn of pace from Gordon down the left took him away from his defender, his cross deflected behind for the first corner from which the Blues opened the scoring in the 8th minute… Gylfi Sigurdsson sent in the set piece and Michael Keane rose purposefully at the near post to power home his downward header for the opening goal from six yards.

Salford responded with a nice move that saw Towell fire in a shot from 20 yards that went straight at Virginia who saved confidently. Bernard was playing behind Walcott and Kean, and his pace was causing the visitors early problems. A long ball from Keane found Walcott and his pass inside found Davies who sent a low shot beyond the keeper and the far post.

Neat skills from Nkounkou saw him bring a save out of Hladky as Everton continued to press forward, Davies having a second shot and then Moise Kean got into the box to shoot narrowly wide. The Blues weren’t going gung-ho, preferring to build steadily and then hit the final yards with pace, Nkounkou again proving a threat on the left with a neat turn and low cross that Salford were happy to clear after the keeper parried.

Jarrad Branthwaite went down on 22 minutes with a left leg injury that needed some attention before disappointingly having to leave the field limping to be replaced by Lucas Digne.

Everton continued to probe patiently while Salford worked hard to deny them the space to get behind their defence. areas where the home side really should have been looking at to stretch the visitors defence and get crosses into the area.

Walcott took a short pass from Kean to drive into the right hand side of the Salford area only to fire his shot wide of the target. Nkounkou with a clever ball sent Gordon into the box, his cross quickly blocked and cleared by Salford but, the young French player was making a fine impression. Gordon collected a ball out wide and cut in to curl a shot that Turnbull got a deflection on to concede a corner on the right that again found Keane, but the header went wide.

Into the final five minutes of a first half dominated by the Blues and a Kenny cross from the right aimed towards Kean was cleared by Eastham. Nkounkou t Davies and onto Bernard, and the Brazilian stepped inside, looked up and fired in a curling shot that Hladky did very well to save low to his left hand side at the expense of another Everton corner.

A competent forty-five minutes from the Blues to lead at the break but, a higher tempo after the interval would surely be the instruction from Carlo Ancelotti… and a word in the ear of Moise Kean wouldn’t go amiss either.

No changes by either manager during the interval and the first real attack went the way of the visitors but another rising shot from distance was way off target. Everton should have doubled their lead on 49 minutes as a lovely cross from Sigurdsson picked out Kean only for his header to hit the crossbar and go behind for a goal kick.

More patient build-up play from the Blues led to a cross from Nkounkou going all the way across to Walcott who found Kenny for a shot deflected away for a corner that came to nothing. Good pace again from Gordon on the left saw his cross come out to Bernard who crashed his shot just wide of the target. Everton were knocking on the door of a second goal that would settle the outcome. Salford hit back with a right wing cross from Wilson to find Hunter who fed Towell but again he couldn’t keep his shot down and it sailed high over the bar.

Henderson was booked for bringing down Theo Walcott before another Salford break saw Henderson find Thomas-Asante, his shot being deflected away for a corner. The visitors were now enjoying their best period of the game and made their first change on the hour mark, Andrade replacing Wilson to play two up front alongside Thomas-Asante.

A good break by Nkounkou saw him get away on the left and send in a low cross that neither Kean nor Walcott could get on the end of. Thomas-Asante become the second Salford player to see yellow for a clumsy challenge on Jonjoe Kenny. Niels Nkounkou again caused Salford problems down the right side of their defence before a cross at the other end from Touray saw Henderson climb above Digne but fail to direct his header on target.

Salford captain Eastham got in the way of an ball from Sigurdsson looking to get Kean into a scoring position and finally the second goal came as the impressive Nkounkou found Gordon and his cutback cross was crashed home from twelve yards by Gylfi Sigurdsson on 74 minutes.

Salford made a double change, Elliott replacing Thomas-Asante and former Everton midfielder Darron Gibson on for Threlkeld for the final quarter of an hour. A quick reaction save from Hladky denied Theo Walcott after more good work from Niels Nkounkou worked another opening.

Everton were still looking to add to their tally and a short ball from Bernard saw Kenny curl a shot just over the crossbar. The woodwork again denied Everton a goal as a shot from Sigurdsson shaved the post and then Gordon crashed a 25-yard shot beyond the despairing dive of Hladky to come back of the upright. Gordon though continued to be a threat and it led to him winning an 85th minute penalty that saw Moise Kean make it 3-0.

Gordon hit the woodwork again as he followed up on a rebound after Hladky denied a Moise Kean header.

A comfortable victory for Everton and progression to face Fleetwood in the next round. The biggest plus points on the night were the form of Anthony Gordon and the impressive Niels Nkounkou, the disappointment, despite his goal, was the apparent inability of Moise Kean to impose himself on the game from open play.