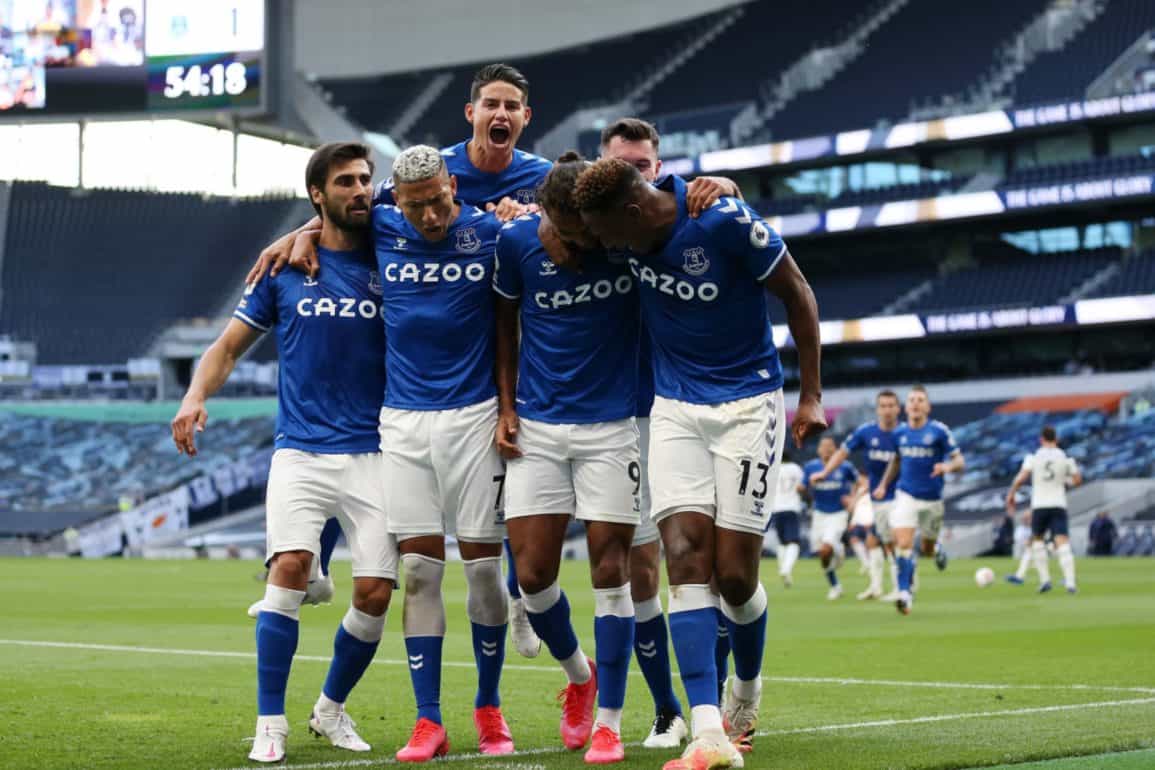 Is it too early for Jingle Bells?

What a difference a midfield makes to a football team, and in Gomes, Doucoure, Allan and James Rodriguez, Everton now have a midfield to go up against anybody… oh, and a towering header from Calvert-Lewin topped an excellent opening day of the campaign.

Carlo Ancelotti and his new look Everton trekked south to the capital for a mouth-watering season opener against Jose Mourinho and his Spurs outfit on a lovely, sunny autumnal afternoon at the new White Hart Lane.

Mourinho was expected to choose from an almost full strength squad that saw Japhet Tanganga out with thigh injury and Giovani lo Celso taking a late fitness test on a hamstring strain. Spurs didn’t include fullback Danny Rose whose future at the club remains up in the air, as he’s not been allocated a squad number.

Whilst openly admitting he’d like to add another striker to his forward line options, Mourinho was no doubt hoping Harry Kane could continue his incredible form against the Toffees that has seen him bag nine in the last nine games between the two sides.

Jose commented pre-game about the continuing absence of fans in football grounds when he noted, “My message is one of empathy. If I was a fan in love with my club, with the best stadium in the world, with a big desire to come back to the stadium to support my team, I would feel very much frustrated. In the end, I feel privileged, because I can be there, and my first words are for all of you who would love to be there and can’t be there.”

With three new signings added to the Everton squad and both Yerry Mina and Andre Gomes recovered from minor knocks, all Evertonian eyes were eagerly awaiting to see which eleven would make open the new season in the Royal Blue shirts. Mason Holgate – with the toe injury sustained against Preston – was the only absentee for Carlo Ancelotti to select from to face Spurs.

There was much speculation of the three new players, Allan, Doucoure and Rodriguez, all making their debuts and in his pre-game press briefing Ancelotti was happy to advise, “They are all in good condition and I am happy they have no problems, they have trained all week and are ready to play. I don’t know if they are able to play 90 minutes – or if they are going to start – but they are available. Allan and Doucoure were training at their clubs before coming here, so were already in good shape physically. James started to fully train this week but, he is fit.”

The Godfather went on to highlight the qualities that saw him keen to and succeed in bringing Abdoulaye Doucoure to Goodison from Watford. “Abdoulaye is a fantastic midfielder, a complete midfielder. He can defend well. He is a box-to-box midfielder. He can bring energy to the club and a different quality. We don’t have midfielders with his kinds of characteristics. We have midfielders with quality and midfielders who are tactically good. He is the only one who is box-to-box. I know him really well, what he did with Watford. He is a player with strong character and he uses that in games. These are the reasons he is a good signing for us. He is going to improve the quality of our squad.”

And one final pre-game thought came from the great Neville Southall who tweeted, “There is no reason for Everton to fear anyone, There never has been. We just need to believe.” Amen to that Big Nev… he knew a thing or two about winning didn’t he?

Our referee was Martin Atkinson.

Early involvement for Jordan Pickford as Son fired in a shot from just outside the area, the Blues keeper handled it comfortably and tried to get the Blues going with a quick clearance that went astray. Kane tried to send Son in on goal but Seamus Coleman was alert and quick enough to clear the partial threat.

Everton were patient in their build-up play, James with a good ball picked out Digne only for his early ball intended for Richarlison to be intercepted and cleared. Early indications suggested that Everton were going to be stronger on the ball and in possession this season, Allan and Doucoure making a definite impact in the midfield area in the opening quarter of an hour, giving Gomes more scope to push forward.

Everton should have opened the scoring in the 16th minute when a shocking ball for Alderweireld was picked off by Richarlison who took it on, rounded Lloris to the outside and then stumbled before firing high and wide.

Son won the games first corner with the ball being deflected behind off Coleman, who Spurs seemed to have identified as the potential weak link in the Blues rearguard; the corner was easily dealt with.

Yerry Mina tried a speculative shot from some distance that sailed over the bar before Son, again being a nuisance, crossed to the back post where Kane wasn’t quite quick enough to capitalise on the half chance. Richarlison played Gomes in down the left channel, Alderweireld clearing his cross aimed for DCL. A quick break saw Gomes find DCL who brought Richarlison into play to find James whose shot was deflected easily into the hands of Lloris.

James sprayed a ball out to Richarlison wide left and he cut in to win the Blues first corner with a shot that was deflected, Hojbjerg clearing the set piece for a Blues throw-in. Doherty then deflected a Digne cross behind for a second corner that saw Spurs counter attack at speed, Moura finding Son who fed Alli rather than Kane, Pickford pushing the Alli shot over the bar for a second Spurs corner that Keane defended well.

A break instigated by Doucoure saw him drive forward to feed James who jinked inside off his right foot to fire a left footed shot that went just wide of the target.

Moura went in hard on Allan who wasn’t best pleased with the challenge that the referee saw as a free kick to Spurs, the home side wasting the opportunity. Doherty to Kane and he continued his run into the box to take a dinked return ball, Pickford with a good save with his right leg to deny the former Wolves fullback.

James again with a good turn to find Richarlison who turned away from his marker to fire a low shot straight at Lloris as we approached the interval. James with a push on Davies gave Spurs a late free kick that Son delayed to then hear the half time whistle. Honours even at the break but, already a marked improvement in the Blues midfield.

Jose Mourinho, obviously bothered about how much possession the Blues had had in the first half, made a change for the second stanza, Moussa Sissoko replacing Dele Alli.

Spurs won an early corner as Keane headed a long ball intended for Kane behind, the Blues cleared the set piece easily. Keane found DCL with a ball down the right channel and his ball into the box found James but, the Colombian screwed his shot from twelve yards well wide of the target with Bogota waiting to explode in celebration. James then took a ball from Coleman to pick out Richarlison at the back post, the Brazilians header was disappointing.

Everton were pressing strongly and a Gomes shot was deflected over for a corner that saw Moura pick up the headed clearance to breakaway, Doucoure athletically getting back to deny him.

On 55 minutes, Everton finally got the lead their domination of possession deserved… a free kick wide on the left saw Digne send in a peach of a cross for Dominic Calvert-Lewin to rise like a stag in the mating season and power his header into the net with Lloris rooted to his line.

Jose – I always win on opening day – Mourinho was clearly displeased with his sides slack marking and just before the hour mark, made his second change replacing Winks with Bergwyn.

Everton made their first change in the 68th minute as Gylfi Sigurdsson replaced Andre Gomes who must have enjoyed his return to the side in a midfield that clearly suits his style.

Moura saw a header easily saved by Pickford and the Blues countered with Richarlison curling a shot just wide of the target. Into the final twenty minutes and it should have been two nil as Richarlison easily beat Doherty to again curl his effort from the left across the face of goal and narrowly wide.

Spurs were struggling to clear their lines as a cross intended for DCL wasn’t dealt with properly and Coleman fired in a shot that Lloris was happy to hold onto. Pickford with a decisive punch cleared a moment of concern and Spurs made their third change as Ndombele replaced Doherty.

Moura won a corner on the Spurs right, Son finding the head of Kane who couldn’t keep the ball down and it sailed harmlessly over the bar. Davies won a corner on the left off Seamus Coleman as Spurs tried to find a way back into game, Pickford with another decisive punch getting the ball clear of the penalty area. Spurs were huffin’ an’ puffin’ but not really causing the Blues defence any serious concern as we entered the final ten minutes.

Sigurdsson found Doucoure to slide a ball through for DCL, his early shot gathered by Lloris. A poor challenge by Hojbjerg on Richarlison left both needing treatment and the former Southampton player was rightly booked for his indiscretion. DCL was still full of running in chasing down a long clearance from Pickford, retain possession and set up a pitchwide passing move before he was replaced for the final couple of minutes by Moise Kean.

Everton looked so comfortable in possession and with Doucoure and Allan looking imperious in the centre of the midfield, picking a Man of the Match could be lead to an interesting post-game poll. Four added minutes were signalled and Tom Davies came on for a cameo role replacing James Rodriguez.

Hojbjerg threw in a late cross that Pickford claimed well, the Blues keeper took a lot of criticism last season, but with a new midfield protecting the back four, we could yet see the best of the England number one as he kept his clean sheet and the Blues deservedly claimed the points.