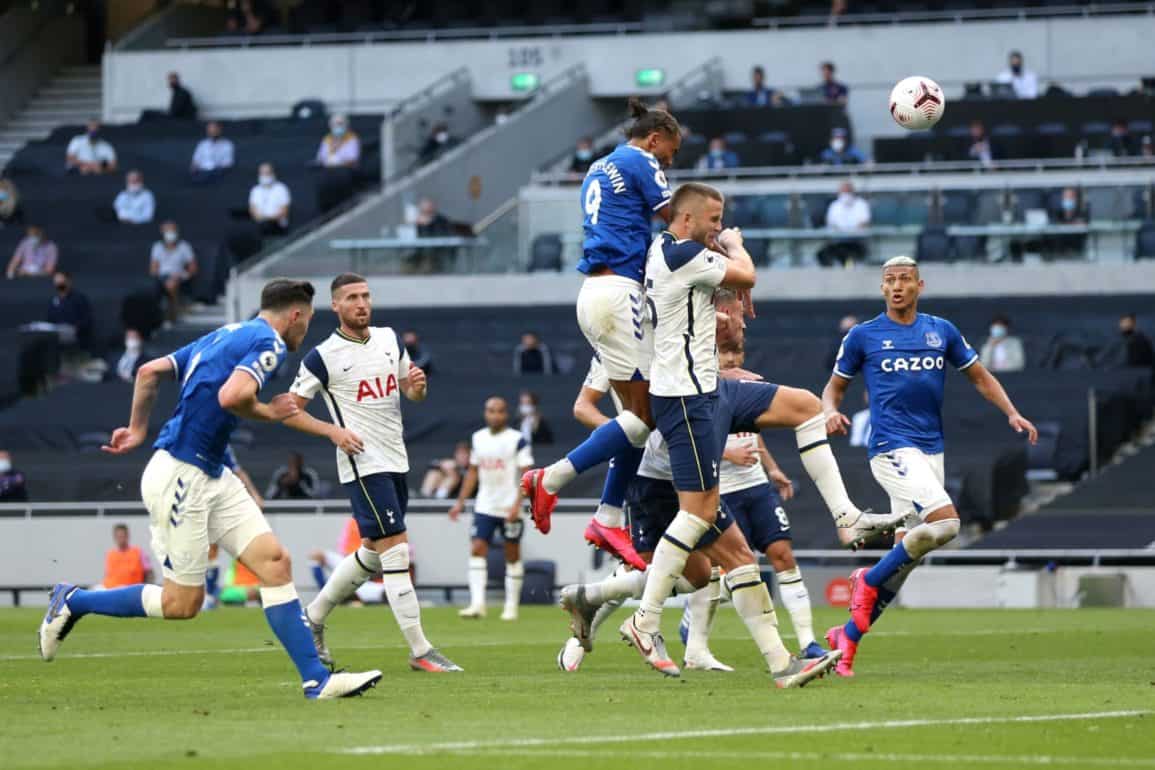 Everton got their 2020/21 season off to the perfect start with an incredibly impressive 1-0 win on the road at Tottenham Hotspur Stadium. It really could have been 3 or 4, as Everton looked a side rejuvenated with the three new signings in the starting XI. The second half was especially encouraging, as going forward, the Toffees looked dangerous every time they broke forward, and defensively, they did not allow Spurs the time or space to create any good chances at all. This was overall, a fantastic team display and an incredibly exciting start to the season. Here are my player ratings for Everton 1-0 Spurs.

I have to say, this is probably the best performance we’ve seen from our number one since his impressive debut campaign. He made a very good save from Dele Alli’s shot, which proved to be Spurs’ best chance of the game, as well as making a great kick save to deny Doherty. He commanded the box incredibly well and looked a player rejuvenated. A good start to a career-defining season for England’s #1.

What a performance from the skipper. Despite an apparent mismatch against Son down Spurs’ left-hand side in the first half, Coleman shut down the South-Korean star and made many impressive tackles. He was phenomenal in the second half as well and had a real shout of being MOTM.

Yerry Mina’s performance didn’t catch the eye, which I believe is a good thing. He did what he needed to do. He looked comfortable on the ball and won the headers he needed to win. He also looked assured while defending set-pieces, which is a problem that has plagued us for years. Overall, a job well done.

A very similar performance from Michael Keane as the one Yerry Mina put forth. He picked up where he left off last season after being arguably Everton’s best player after the lockdown. He was very confident defending the box and made many important clearances, as well as giving Spurs’ danger man Harry Kane no space to operate in the box.

Lucas Digne once again showed why he is one of the best left-backs in Europe right now. He defended incredibly well, and of course, was very involved in linkup play and chance creation. His freekick delivery that led to the goal was absolutely magnificent. Great performance.

Carlo Ancelotti may just have found Everton’s desperately needed Idrissa Gueye replacement. Although he misplaced a few passes, Allan was a soldier in the midfield and made many tackles and interceptions that helped Everton constantly disrupt Spurs’ build-up play. His combativeness in the midfield was crucial in earning a clean sheet against a very talented team going forward.

Doucoure was another key figure in the more than obvious transformation of Everton’s midfield. He used his body well but had a few sloppy touches and passes while in possession. He did, however, make a crucial tackle on Lucas Moura, who would have been clean through on Pickford’s net if it weren’t for the Frenchman’s perfectly timed challenge. I think Doucoure will only grow in confidence and will be a very important player for the Toffees this season.

As I suspected, the presence of Allan and Doucoure in the midfield allowed Andre Gomes to play the role he is best at. He did not have nearly as much defensive responsibility in the 4-3-3 Carlo employed in North London, which allowed him to get into good areas to progress the ball and retain possession. He had a few very nice balls into space and tight turns around the Tottenham press. A very good performance from a fan favorite.

Colombian superstar James Rodriguez did not fail to impress in his Premier League debut. From the first whistle, it was easy to see James’ class and ability on the ball. He cut in superbly on his left, swinging balls across to Digne and Richarlison, as well as just nearly missing a curling shot toward the bottom left corner. He had some fantastic first touches and worked hard. This was not a performance that indicates he is a “luxury player”, as he was defensively sound and was instrumental to many of Everton’s attacking moves. I think it’s safe to say that every Evertonian will be more than excited to see more of him soon.

Despite the fantastic hold-up play and turns that we’ve come to expect from Richarlison, this was definitely not his best game going forward. He missed too many opportunities, the most poignant of which was when he rounded Lloris before losing his footing and missing an empty net. He did not look to be at his sharpest, but even so, was still very dangerous cutting in from the left-wing. I expect more from him in future fixtures, but it was not an awful performance at all.

DCL was quite absent in the first half, but he well and truly stamped his mark on this match, scoring the winning goal with a thumping header that flew past Lloris in a flash. In the second half, he ran Spurs’ defenders ragged down the channels and he was unsurprisingly solid with his hold-up play. Despite a lack of impact in the first half, Calvert-Lewin has to be my MOTM. Big players show up in big moments, and that is exactly what he did. Match-winner.