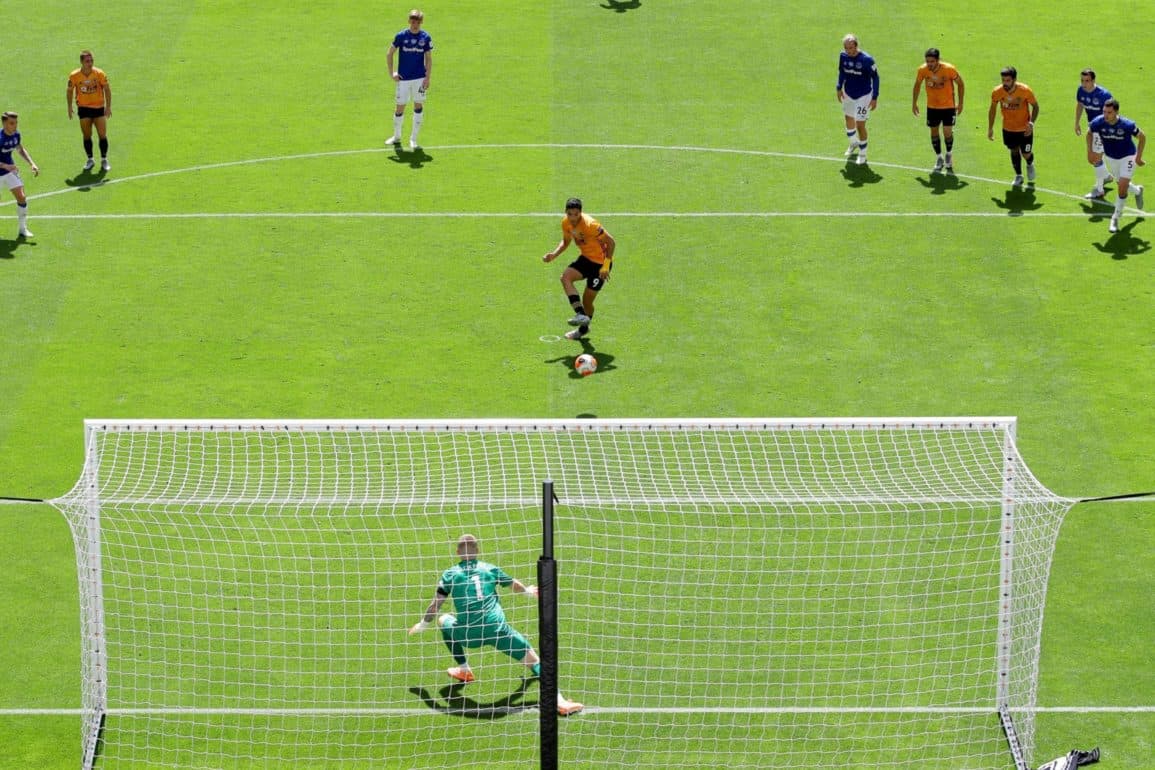 Goals either side of half time from a Jimenez penalty and a Dendoncker header set Wolves on their way to an easy victory, a third stirke by Jota the icing on the cake as Everton were soundly beaten.

In need of a morale boosting performance, Everton travelled to the Black Country to face a Wolves side beaten in added-on time by Sheffield United last time out.

Wolves were expecting midfielder Pedro Neto to return to first team action but they had a doubt over Adama Traore who dislocated his shoulder at Bramall Lane, the fourth time he’s incurred this injury this season.

Manager Nuno Espirito Santo was confident his side would bounce back from that defeat when he commented, “Football teaches everybody that it’s up and down. It’s the way that you react from bad momentum. This is what makes your character and builds the team.” He continued, ”The talent is there, the knowledge is there, we need confidence – persistence and resilience to search achieve things. Keep believing in the good things you do, try new solutions because all the teams know each other so well, so it will require new things. Everybody has to reinvent themselves each game.”

For Blues manager Carlo Ancelotti, Mason Holgate remained a doubt following the injury sustained at Spurs last Monday, as did Andre Gomes who left the draw against Southampton before half time with a knock to his ankle. With Theo Walcott named on the bench, only Fabian Delph remained unavailable for selection.

The noon kick-off at Molyneux came less than 72 hours after the Southampton game, and a full day less than Wolves had had to rest following their last outing, a fact not lost on the Italian who remarked, “It will be tough, for sure. Wolves are fighting for Europe so I expect a really tough game. We want to keep fighting and keep going until the end of the season. The fact Wolves have had one more day rest is important. I have to take care of the line-up. I want to keep it fresh and do some changes for the game. We don’t have time to recover properly.”

In charge of proceedings on a bright and sunny afternoon was referee Anthony Taylor.

Comfortable early saves by both goalies saw Pickford deny Podence and Patricio foil DCL sent in down the right by a ball from Walcott. Wolves with more of the possession in the opening stages however, the initial 3-5-2 set-up of the Blues saw Digne dropping back to make it a conventional 4-4-2 to pose the home side a problem.

Jimenez turning on the edge of the box to beat Mina saw Digne in quickly to concede the first corner that Wolves could make nothing of. A patient build-up by the Blues saw Walcott send in a tempting cross just too far in front of the strikers, and they kept the pressure on through Digne and Baines to find Gordon for a nice turn to work an opening only to see his shot blocked by Coady.

Digne saw the first yellow card of the game for a pull on Jimenez as he looked to break into the Blues half and the first drinks break arrived with the balance of play fairly level, neither side having worked each others defences too hard.

A good ball from Podence for Jimenez again saw Digne show his pace to get back and deny the Spaniard with Pickford pouncing to gather the loose ball. Pickford had to be sharp to get down at his near post as an inadvertent touch on the ball by Walcott fell nicely for Podence to fire in a low shot. Wolves were now pushing for the opener and Jimenez juggled the ball before attempting a bicycle kick shot that Pickford again saved comfortably.

Mina went down on 29 minutes with a right thigh problem and after treatment walked off the pitch gingerly to be replaced by Seamus Coleman.

Wolves were still targetting the right side of the Blues defence and a cross from Neto saw Pickford collide with Digne to fumble the ball and Keane complete the clearance. A chipped ball from Davies toward DCL saw the striker go down on the edge of the box with only a half-hearted and unsuccessful appeal for a free kick, and in added-on time, Podence got past both Baines and Gordon to turn in the box and drew the foul from Lucas Digne to give the home side a penalty that Jimenez coolly slotted to give Wolves the half time lead.

A second change for the Blues for the start of the second half saw Jarrad Branthwaite enter the fray for his Premier League debut, at the expense of Leighton Baines, to complete a more conventional back four with Coleman, Keane and Digne. And his first involvement was to give away a free kick on the right that saw the ball floated into the area by Neto for Dendoncker to direct a deft header beyond the reach of Pickford for two-nil.

Neto went down with a left leg problem and Wolves were forced into a change, with Jota replacing him. The break in play saw Carlo Ancelotti make a double change, Bernard and Iwobi replacing Walcott and Gordon respectively.

Michael Keane saw yellow for a foul on Jimenez on 57 minutes with Everton desperate for something inspirational from somebody, somewhere. Wolves were still looking the more likely and Pickford was extremely fortunate to prevent a third goal as a short range effort Podence escaped his grasp and he just managed to grab the ball on the line.

The Blues final change came on 63 minutes, Moise Kean replacing Richarlison who had seen precious little action such was the Blues inability to build through the midfield and bring the Brazilian into the game.

Wolves defended an Everton corner and Neves sent Jota free and Pickford made up for his earlier error by racing off his line to deny the Portuguese to keep the game alive. Iwobi sprayed the ball wide to Digne and his pull back cross found Sigurdsson only for his shot to be deflected away for a corner.

The Blues best chance of the game so far came when Bernard threaded a ball through for Keane to find Digne for a shot across the face of goal, only for the Frenchman to be ruled offside. However Wolves struck with deadly effect from the restart, as Neves fired a superb 40-yard crossfield ball to Jota and he crashed his shot past the advancing Pickford to rubber stamp the home sides three points.

Digne with a cross from the left found the head of DCL, Patricio saving his downward header comfortably enough.

Wolves sent Moutinho on for Jimenez with 13 minutes left on the clock.

Digne went down with cramp inside the final ten minutes but with all the substitutes used, he had to carry on. Everton were lucky not to fall further behind when another quick break by Wolves saw Jota on the left cross into the area to find Traore all alone eight yards out and he hit the crossbar with the goal gaping in front of him.

The final whistle really couldn’t come soon enough for Everton as three games in a week with only one point to show from three disappointing performances has clearly outlined to Carlo Ancelotti the sheer size of the task ahead of him if he is to somehow turn this struggling bunch of players into a team that can compete and contend.

Wolves though were still looking for a fourth goal and Traore burst forward down the right and tried to find Dendoncker at the near post. Four added minutes were signalled and again, it was Traore bursting forward and running away from Davies and Sigurdsson with Digne finally blocking his way.

The final whistle eventually came as a merciful relief from another toothless performance from Everton while Wolves were still eyeing possible Champions League qualification.