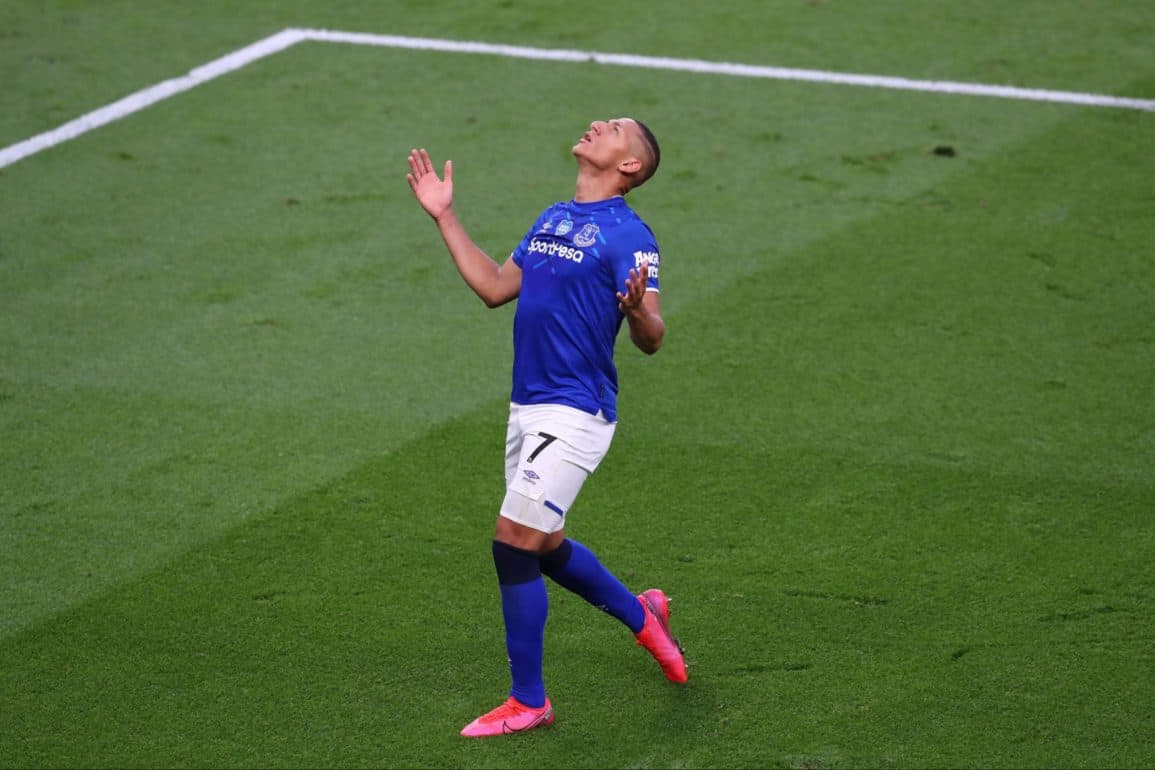 A deflected own goal off Michael Keane saw the Blues go down at Spurs and remain in eleventh place with any faint hopes of European competition next season having surely disappeared.

Project Restart continued with Everton featuring in the Monday Night game away to Jose Mourinho and his stuttering Tottenham side fresh from their VAR affected 3-1 loss to Sheffield United.

The Portuguese was unable to call on defenders Juan Foyth or Japhet Tanganga and had a fitness concern with Dele Alli having reportedly suffered a hamstring strain in training on Saturday.

Mourinho commented, “There was something today in training with Dele, but when I say ‘something’ it’s because I don’t think it’s big, and because I don’t really know what it is. The bad thing of a press conference 48 hours before the game is that there is still a training session tomorrow, so you cannot know what I do not know, if he’s available or not. If you ask me at this moment, I would say that he will be available, but, I don’t know.”

With both sides part of a cluster of clubs still harbouring hopes of Europa League qualification, this was likely to be a lively affair as a draw would suit neither club nor manager.

For the Blues, manager Carlo Ancelotti expected Richarlison to recover from the ankle knock that saw him leave the victory over Leicester early. And Djibril Sidibe had recovered from a foot problem to make himself available but neither Theo Walcott nor Fabian Delph were close to first team recalls.

Ancelotti spoke glowingly of the emergence of Anthony Gordon into the first team squad, “He is doing really well and is ready to play for Everton, no doubt. He improved in the past six months and how he is playing [in training and games] gives me a lot of confidence and trust in him.”

Our referee at the new White Hart Lane was Graham Scott.

Spurs with the early pressure winning two quick free kicks with Pickford strangely conceding a corner when he could have let the ball go harmlessly out of play. A minute later though he was quick off his line to deny Kane who was adjudged offside.

Everton weathered the early Spurs attacks and settled into a pattern that began to frustrate their hosts, defending in numbers and closing down quickly in the final third of the field.

Richarlison won a free kick after Ben Davies appeared to accidentally tread on his foot and Sigurdsson tried to thread a ball for DCL but, he’d strayed offside. The game was still a bit scrappy, the sides trading free kicks as they tried to impose them selves on each other.

The best chance of the opening twenty minutes went to the hosts as Moura fired in a long-range shot that went wide with vain calls for a corner. The Blues countered with Gomes chipping a ball forward for Iwobi to chase but, Lloris was quick off his line to head clear just outside his penalty area.

Spurs opened the scoring on 24 minutes as a shot from Kane fell nicely for Lo Celso and his shot on the turn was going miles wide only to be cruelly deflected past Pickford off Michael Keane.

Mason Holgate saw yellow for a stiff challenge on Lo Celso as Spurs broke quickly Kane and Son, the result a free kick just outside the Everton area on the let hand side that Dier curled over the wall and the crossbar. Holgate went down needing a bit of treatment after the goal kick, Yerry Mina warmed up as a precaution.

Everton won a corner as Richarlison fed Coleman bursting forward and then a second that saw Lloris easily claim the cross from Digne. Andre Gomes conceded a free kick for a soft foul on Son giving Spurs another free kick in a dangerous area as Holgate left the field to be replaced by Mina on 36 minutes. Kane lined up the kick and his effort hit the wall and flew out for a corner. A shot from Spurs Davies then hit Tom Davies at the expense of another corner, Mina with the clearing header.

Mina tried to get Digne away down the left channel, but Aurier was alert to clear for a throw-in which saw Alderweireld head the ball behind for a third Blues corner. DCL got to the back post and forced Lloris into conceding another set piece that Digne swung in and Gomes fired high and wide as the ball was only half cleared.

Another quick attack from Spurs saw Kane feed Moura with Digne making a key challenge to deny him at the expense of a corner that Pickford didn’t claim and it went out for another corner, good work at the back though by DCL averted the Spurs threat.

Five added minutes were signalled on a half that Spurs had had the better of, but only had the deflected goal to show for it. As for the Blues, an increase in pace, tempo and work rate together with a large helping of self-belief was needed for the second half. In the final seconds, Mina picked off a ball from Moura and drove forward to find Richarlison and the Spurs defence didn’t close him down and his shot from twenty yards went just wide of the target.

As the players left the pitch, Lloris and Son appeared to have something of a hissy fit with each other.

Anthony Gordon replaced Alex Iwobi at the start of the second half as the Blues desperately needed to get some intensity into their play, and look like they actually wanted to win the game and go above Spurs in the table.

Sissoko took the legs of Richarlison and was rightly booked for the cynical challenge. Everton got forward and eventually Davies fed Gordon who lined up a 25-yard shot that lacked the power to overly trouble Lloris, but at least it was on target.

A long ball from Alderweireld found Son to get away from Mina and force Pickford into a save low to his right, Keane mopping up and clearing the loose ball. DCL and Gordon worked the ball wide on the right with DCL crossing too close to Lloris for Richarlison to get on the end of. Moura on a jinking run crossed to Son who fed Winks for a shot that had power but went well wide of the target.

Approaching the hour mark and Everton were in even greater need of some inspiration, too many players simply going through the motions, nobody taking command and driving the team forward… had travelling fans been there, they’d have been fed up by now at this showing. And the lack of intensity was epitomised by a poor cross from Gomes, under no pressure, that sailed wide and behind for a goal kick.

Kane with a deft layoff found Lo Celso and he sent Son away to fire a curling shot across the face of goal. Moura then ran away from Sigurdsson to feed Son and Pickford was called into action making the save.

On 67 minutes, Everton made their third change, Bernard replacing the completely anonymous and ineffective Sigurdsson. The second drinks break came and with 23 minutes to play, Everton needed something urgently to get them back into the game and rattle Spurs who were looking increasingly comfortable.

Davies to Gordon to DCL to try and find Richarlison as the Blues worked straight down the middle only for the move to break down as DCL strayed offside but, it was a little better and certainly more direct. An Everton free kick from out wide wasn’t cleared and Moura clumsily fouled Davies to give the Blues a shooting opportunity free kick just outside the area. Bernard fired the shot low and Winks deflected the second effort from Davies out for a corner. Digne swung it in and Kane got the clearing header.

Spurs Davies saw yellow after a foul and shirt pull on Richarlison.

Into then final fifteen minutes and Ancelotti made a double change, Sidibe and Moise Kean replacing Seamus Coleman and Tom Davies respectively. Jose Mourinho immediately sent Bergwijn on for Son, ahead of Lamela replacing Moura.

It was now or never time for the Blues if they were to rescue something from this dismal trip to the capital, Aurier conceding another free kick that was cleared and lofted back in for Keane to find DCL but his was hurried and the ball cleared where Gomes conceded a free kick that saw Alderweireld booked for time-wasting.

Gomes capped a poor evening with a yellow card for a foul on Lamela ahead of Kean fouling Lo Celso.

Kean and Bernard found space on the right for two quick crosses, but the Spurs rearguard were more than a match for them. Four more added minutes saw Vertonghen replace Lo Celso and Spurs easily run down the clock despite a late rush from Mina and Keane that ended with Sidibe missing the target.

To say this was a dismal performance is a gross understatement, and the manager will surely be completely non-plussed at how poor his side were against a bang average Spurs.