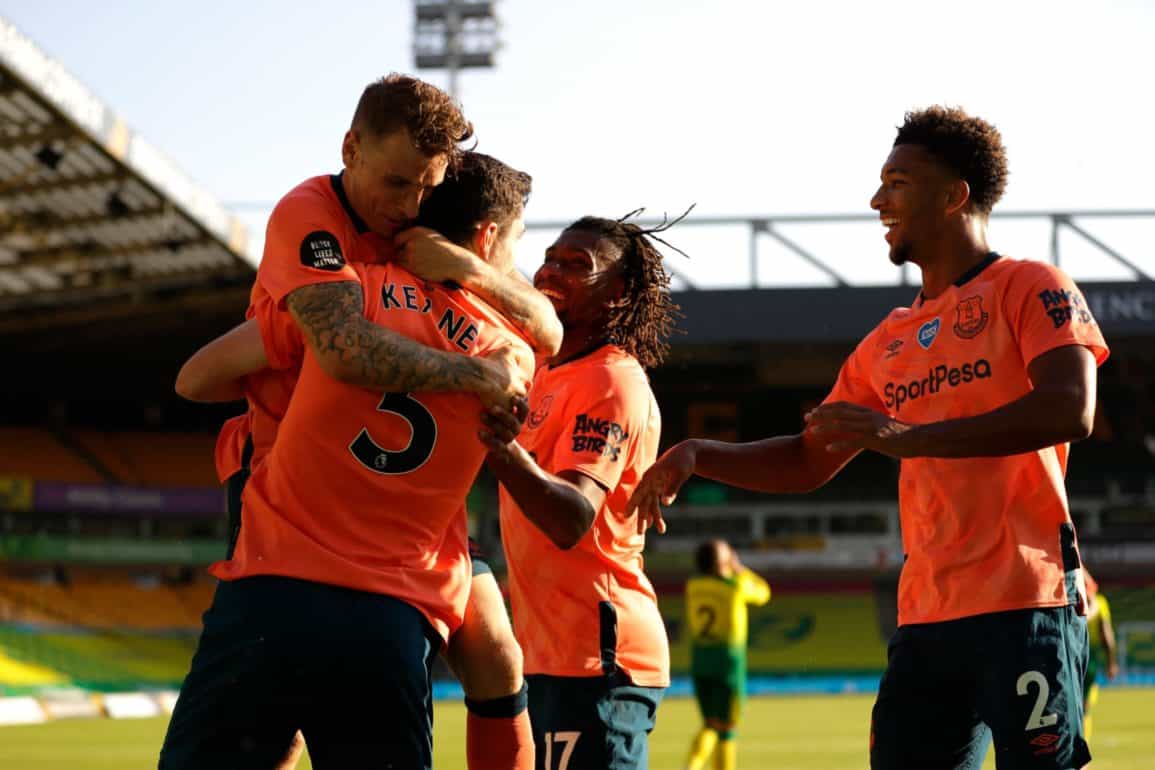 Keane the deciding factor, dominant at the back and sealing the points.

A deft and guided header from a corner by Michael Keane proved just enough as Everton got back to winning ways on a blisteringly hot evening at Carrow Road. Everton were not at their best but just about did enough against a doomed City side.

After a creditable draw with them from across the park on Sunday, our beloved Boys in Blue travelled to the land of the Broads to face relegation haunted Norwich City.

And there was equally if not more pressure on Everton to get a result as there was last Sunday. Getting up for the ‘derby’ should never be an issue, but maintaining and even improving on that level of commitment against the Canaries was even more crucial as Carlo Ancelotti continues to assess his squad ahead of the summer.

Five points adrift at the bottom of the Premier League table, Norwich appear doomed to the drop and German manager Daniel Farke knows his side needs at least five wins from their remaining eight games to have any chance of playing top-flight footie next season. It’s a huge ask for the Canaries and Everton will be keen not to be one of those much needed victories as they themselves retain faint hoes of qualification for European competition next term.

Beaten 0-3 by Southampton last weekend, Farke had defenders Byram, Hanley and Zimmerman all out for the rest of the season nut, no further injury concerns following the loss to the Saints. Midfielder Marco Stiepermann had recovered from Covid-19 to declare himself fit to play.

Farke though will look back to the corresponding game at Goodison back in November when his side won at Goodison, a game he remembers fondly saying, “The last Everton game was a long time ago, but we know when we’re good in our topics we can beat anyone if we’re at our best level. With individual quality like Everton, there is a bit of hoping they aren’t on their best day.”

But he was also realistic when he noted, “They have a hugely experienced coach in Carlo Ancelotti, his teams are so well set-up in attack and then can get back to defend, even Liverpool were struggling. It says a lot about the club and him. We know we’re the underdogs.”

Carlo Ancelotti was pleased with his sides performance and sticking to his gameplan against ‘them’ on Sunday and knew the Blues had to take that confidence and impetus into the Carrow Road encounter. In his pre-match press video call, our Italian maestro noted, “In the game [against Liverpool], the team was fantastic on the physical aspect, I was a bit surprised, “I am also sure it will be more difficult in the next game because we didn’t have a lot of time to rest. We have to be focused to repeat the same performance. Norwich have had two more recovery days but, fortunately, there is not only the physical aspect in football, there is the mental, tactical and technical quality we would like to show tomorrow.”

He added pointedly, “Our goal is to compete until the end of the season, to try to climb the table, to try to find a position where next season we can play in Europe. This is the target, it is difficult but the teams in front of us are not so far ahead.”

With the transfer of Morgan Schneiderlin to Nice having been completed, Ancelotti was still without the injured Delph, Mina and Walcott and so, the side to face Norwich was expected to be selected from the same squad that was named on Sunday.

Our referee on a balmy evening was Andy Madley.

In the warm evening sunshine, Everton took to the field resplendent in their salmon pink away kit and Norwich made them play the first half facing into the sun, a ploy to make things difficult for Jordan Pickford on crosses and high balls maybe.

A quiet, steady opening saw the home side waste an early free kick while Everton were trying to get Digne and Bernard together down the left flank with Iwobi having switched to the right to link with Coleman. Two crossing opportunities in quick succession for Bernard saw his first for Richarlison cut out and the second reach DCL who couldn’t direct his header on target.

The home side appeared happy to let Everton have more of the ball, in similar fashion to that which the Blues employed on Sunday, relying on a quick counter attack to trouble the Blues rearguard. Klose was lucky not to see yellow for a clear foul on DCL as the Blues centre forward looked to break away on a ball from Gomes.

The first save of the game came when Hernandez saw his shot deflected and Pickford was happy to watch the ball graze the post on its way behind for a corner that was easily cleared. A long cross from Lewis was headed down by Aarons and Holgate was cool and calm in clearing the ball as Norwich enjoyed a few moments of attacking play ahead of the first drinks break.

DCL getting to an early ball from Keane couldn’t overly trouble Krul in the Canaries goal and approaching the half hour mark, it was Norwich who were looking the more likely… the Blues badly needing to rekindle the intensity they displayed against Liverpool.

A heavy challenge by Holgate on Duda saw a free kick awarded just outside the Everton area but the wall stood firm, the shot cannoning off the legs of Michael Keane and the danger was averted.

Bernard and Iwobi combined for a cross too long for Richarlison and Norwich cleared, but this was the first sign of true intent from the Blues in a largely lack-lustre first half to date, and this against a side rooted to the foot of the table. Krul was quick off his line to clear a long ball from Davies aimed at DCL making this observer wonder why TD went route one rather than looking to bring the Everton midfield into the game?

DCL and Iwobi combined for DCL to turn well and cross for Richarlison, but Godfrey got back with a telling header to deny the Brazilian any chance of testing Krul. Norwich wasted another free kick and as half time loomed, changes during the interval would surely have been in the thinking of Carlo Ancelotti.

In added-on time, Pickford made a good save from a long range effort from Rupp on the end of a long ball from Tim Krul, but the teams left the field with the scoreboard idle and most of the TV audience probably fast asleep, such was the lack of intensity and quality on display.

Gylfi Sigurdsson came on for the second half at the expense of the well below par Tom Davies and the Blues went straight on the attack winning their first corner that came to nothing. Norwich then saw a corner conceded by Holgate cleared with ease as the game continued with all the intensity of a low-key pre-season friendly.

Bernard bursting into the box was closed down by three Norwich defenders but finally, some semblance of urgency had appeared, and with Alex Iwobi looking more intense, maybe things were about to pick up.

Ten minutes into the second half, and from a corner Everton took the lead. Lucas Digne swung it in and Michael Keane climbed to guide his header well beyond the rooted Krul and inside the far post.

Everton were now looking much more interested and playing with more pace, DCL with a neat control, turn and shot that Krul tipped over the bar for another corner that he then stretched well to punch clear. Everton won another corner as a move down the left ended with a Richarlison shot being blocked. DCL met the long set piece but his header was weak and easily gathered by Krul.

The midfield with Sigurdsson and the now revitalised Iwobi were looking much more combative and efficient, if the rise in tempo could be maintained, then a second, game-killing goal was surely on the cards?

Digne went down holding his right leg following a tackle on McLean, the ball then going for a Norwich corner off Sigurdsson, Iwobi at the near post clearing again a poor set piece by the home side. A good break by DCL down the right flank saw support arrive too slowly and too late, and the next Everton raid saw Bernard find Iwobi to cross for DCL but his header was disappointingly well off target.

A free kick, following a foul by Digne on Aarons, caused a moment of anxiety at the back and we moved into the final quarter hour with Everton ideally needing a second goal to crush the Canaries’ flagging spirits. Buendia and Pukki caused another moment of alarm with Pickford racing off his line and not getting g there, but the Blues had numbers back and Norwich could get the ball back into a telling area.

More changes on 78 minutes saw Moise Kean come on for Richarlison while Norwich added Idah for Hernandez, and Vrancic on for Tettey. Kean made his mark in the wrong way with his first involvement being in receipt of a booking for a foul on Vrancic.

DCL fired a shot straight into the arms of Tim Krul when a pass to the right for Iwobi might have been the better idea, but give the number 9 credit for having the confidence to take on the shot.

Cantwell replaced Lewis and Leighton Baines replaced Bernard, Carlo Ancelotti obviously feeling the experience of Baines might be needed to see out the final four minutes to take the points back to Merseyside.

Anthony Gordon got a cameo appearance replacing Alex Iwobi ahead of Idah shooting on the turn, the shot deflected away for a corner which brought a second as six minutes of added time were signalled. Moise Kean broke away to win a free kick that saw Digne curl his effort over the wall and the crossbar too.

Added-on time was largely huff ‘n puff stuff from Norwich and a speculative high ball into the box saw Klose foul Pickford, and the clock ran down, Everton taking the points and Norwich dejected as the drop looms large in their sight lines.