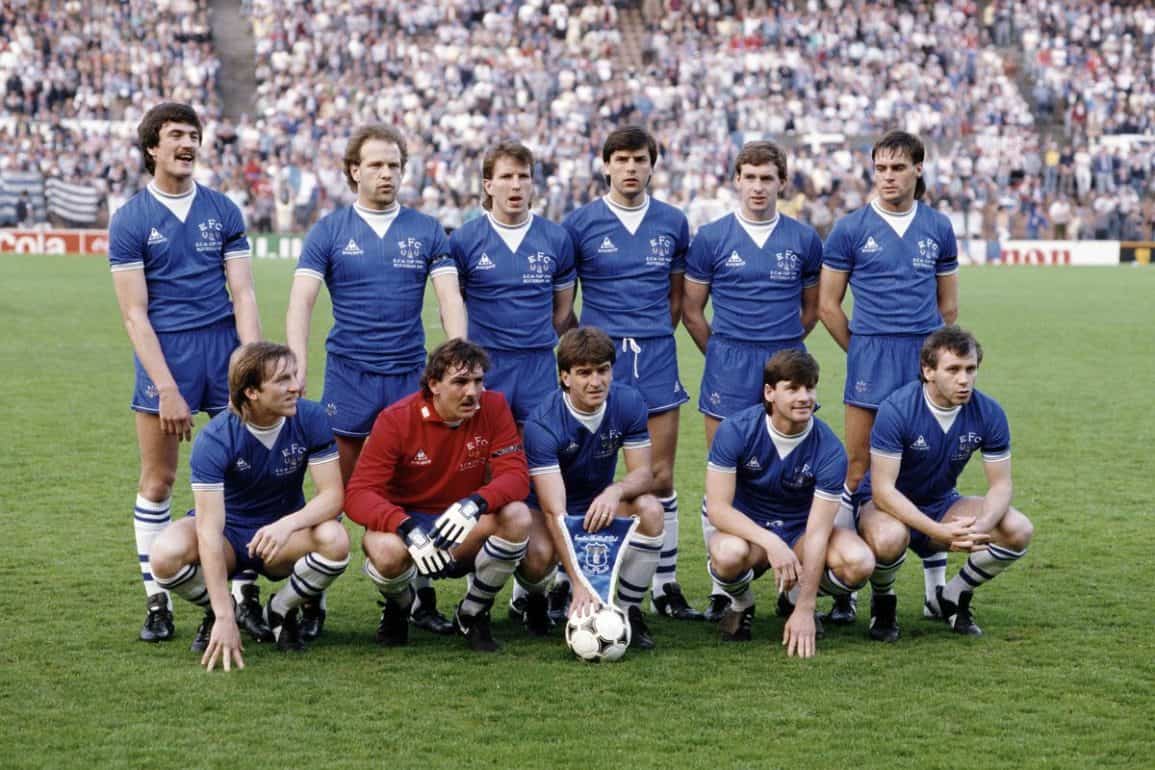 Finally, Evertonians had what they had longed for: the chance to stake a claim on the European stage. The vanquishing of Bayern Munich earlier in the season had booked the Blues a place in the Cup Winners’ Cup Final in Rotterdam.

There they would meet Austria’s Rapid Vienna (who had won the previous season’s ÖFB-Cup). Rapid had enjoyed a slightly easier semi-final against Dynamo Moscow, who they had beaten 4–2 on aggregate.

Although certainly no ‘Bayern’, any club that could make the final needed to be examined, and Kendall did just that:

‘I went out to run the rule over them at the earliest opportunity,’ he later wrote in Only the Best Is Good Enough. ‘What I saw that night delighted me. They were nowhere near as good as Bayern and I knew we could beat them quite handsomely.’

Some of the players had come to the same conclusion after they too had watched Rapid play.

The Austrians’ second round, second leg game against Celtic had been replayed after Rapid’s defender Rudi Weinhofer had fallen to the ground and claimed to have been hit by a bottle thrown from the stands (later proven to be untrue). The replay took place at Old Trafford, which the Viennese team won 1–0 (going through 4–1 on aggregate).

‘A few of us, Reidy, Inchy and Sharpy and I, went to watch the game in Manchester,’ remembers Andy Gray. ‘We all agreed that there had been nothing in that performance to give us any reason to fear them. We knew we were the better side.’

With the championship wrapped up against QPR earlier in the month, Everton had the luxury of heading out to the final in Rotterdam free from the prospect of a title run-in.

‘Although we had the FA Cup Final a few days later,’ says Kevin Ratcliffe, ‘at least the league, the winning of which is always a gruelling slog, was out of our minds. We could concentrate on beating Rapid, which if I’m honest, we all thought we would. It wasn’t just that they seemed weaker, we also felt invulnerable. We could have been playing anyone and that confidence would still have been there.’

The game itself would be taking place in the Stadion Feijenoord in Rotterdam, a ground that was two-thirds the size of the St. Jakob Stadium in Basel, which had hosted the previous season’s final between Juventus and Porto.

This meant that only a fraction of those Blues who wanted to go were able to get tickets. For those that did, the build-up was memorable:

‘It was a great experience,’ recalls Phil Redmond of When Skies Are Grey. ‘To be honest, it was more like a party. I’d gone over to Munich for the semi and that was tenser. I don’t think anyone could see us losing against Rapid, considering just how good we were. So there was a happy atmosphere. None of the anxiety you usually get with the Blues. I think we’d used all that up against Bayern.’

For the players, the sight of the thousands who had travelled to lend their support was a welcome one, as Kevin Ratcliffe remembers:

‘It felt as though the entire place was filled with Evertonians. That’s how loud and present they were. They seemed to completely outnumber the Rapid fans. With that and the size of the place it was almost like we were playing at home. You look up at that when you come on to the pitch and just think how amazing it is. That level of support was worth a goal start.’

From the first kick, Kendall’s predictions that Everton would be too much for the Austrians to handle proved prescient. As the Liverpool Echo reported:

‘They [Vienna] appeared to be totally overawed by the prospect of meeting the English champions. Unsure at the back and reluctant to venture out of their own half they simply sat back attempting to weather a ferocious onslaught which was near ceaseless.’

Everton were dominant, specifically in the centre of the park, with Reid and Bracewell afforded so much time and space it must have felt like a training match.

‘Sometimes when you think you’re in for an easy game, it doesn’t turn out like that,’ recalls Pat Van Den Hauwe. ‘Maybe complacency kicks in and you underperform, or perhaps the opposition are fired up and perform better than you imagined they could. But on that occasion, it was as straightforward as we hoped it would be.’

Southall, for all intents and purpose, was a mere spectator, and was not called on to make a save of any description until the half-hour mark (and that was from a wayward back-pass).

A goal for the Blues was on the cards from the off, and eventually, with five minutes to go until half-time, one appeared to arrive after Mountfield rose to meet Sheedy’s ‘training ground’ free kick and head the ball to Gray, who managed to get a foot on it to steer the ball home.

‘I remember getting up to celebrate and being stunned that it wasn’t allowed,’ says Gray. ‘The linesman had flagged for offside on Degsy. It was a mistake, though. The goal should’ve stood. We should have gone in at the break one ahead.’

But it wasn’t to be, and so, improbably, as half-time arrived, the scores were level.

‘Exactly how these two poles apart sides found themselves walking from the field on level terms at half-time will remain a mystery for some time,’ reported the Echo, continuing: ‘Everton, who have adapted their bustling domestic style to suit the European game with admirable ease, had an embarrassingly high percentage of possession.’

Unsurprisingly, Rapid came out with a bit more venom after the break, and early on Everton found themselves defending for the first time that evening. The game could have been very different had Krankl’s shot from the right, which took a wicked deflection off Pat Van Den Hauwe, crept under the crossbar rather than bouncing off it.

But the effect of whatever was said by Otto Baric to his players at half-time gradually dissipated, and as the game wore on, normal service resumed, with Everton continuing to press and dominate the Austrians.

The goal, which the Blues had threatened to produce since the first exchanges, did eventually arrive in the 57th minute, when Sharp latched on to a misplaced back-pass, rounded the keeper and chipped a pass through to Gray.

‘I had an open goal’, says Gray, ‘and just volleyed the ball into the net. It was an incredible feeling. And it was the goal that killed the game in my opinion. Our opponents had shown little before that, and after we scored, you got the sense that they had nothing to offer.’

Everton were rampant from that point onwards, rarely giving Rapid any space to breathe. A second goal seemed inevitable, and it came when, as the Echo reported, ‘Sheedy’s corner from the right was flicked on by Sharp, Mountfield ducked and after the ball had eluded the outstretched legs of three defenders Steven arrived at the far post to volley home sweetly.’

At 2–0 up, Everton appeared to be in total control. ‘It was as one-sided a final as you could imagine,’ thinks Simon Hart. ‘I think by this point, Everton were almost better than the competition. We were English champions, by some distance, and probably were better suited to the European Cup. We were possibly the best side in Europe.’

But – even when dominant, playing at their best, sweeping all before them – this was still Everton.

‘Everything was going well,’ recalls Kevin Ratcliffe, ‘when, totally against the run of play, Rapid got back in the game.’

An innocuous through ball to Kranjčar on the edge of the box was deftly back-heeled by the Rapid midfielder past Ratcliffe into the path of Krankl (possibly in an offside position). The Austrian forward then took it around Southall and put the ball neatly away.

‘It was a bit of a blow’, says Pat Van Den Hauwe, ‘to have been so dominant and with just five minutes left suddenly find ourselves with the prospect of defending a narrow lead. Luckily, it wasn’t a prospect that lasted very long.’

If this had been the Everton of Mike Walker, Roberto Martinez or Walter Smith, then you would expect a capitulation to follow that goal (in the exceptionally unlikely event one of their sides would reach a European final). But this was the Everton of Kendall (Mark 1), and so what happened was exactly the kind of response a supporter would want.

‘Undaunted Everton hit back straight away from the kick-off,’ reported the Echo, ‘tearing forward to expose a flat-footed defence which had charged forward to seek an equaliser. Sharp fed Sheedy out on the left and the Eire international made no mistake from 12 yards, firing high into the roof of the net to officially open the celebrations.’

‘I think the Rapid fans were still celebrating when I put the ball away,’ says Kevin Sheedy. ‘Although, not for long, because at 3–1 that was the game over. It was the perfect response. And a scoreline that was no more than we deserved.’

To the delight of the thousands that had made the trip and the many more watching at home, the whistle blew shortly after, and Everton, for the first time in the club’s history, had claimed a European trophy.

‘It was a special feeling lifting that cup,’ says Kevin Ratcliffe. ‘It was an amazing moment for me. A real honour.’

The victory left Everton, as FA Cup finalists, tantalisingly close to the ‘Treble’. Sadly, as most Blues recall, a knackered Everton side faced Manchester United a few days later and lost 1–0, the extra effort just being beyond them.

‘It was disappointing,’ admits Kevin Sheedy. ‘But we still had so much to be proud of. To win the league and the Cup Winners’ Cup marks that side out as a great. Rotterdam still stands as one of the club’s most memorable moments and I was honoured to be part of that.’