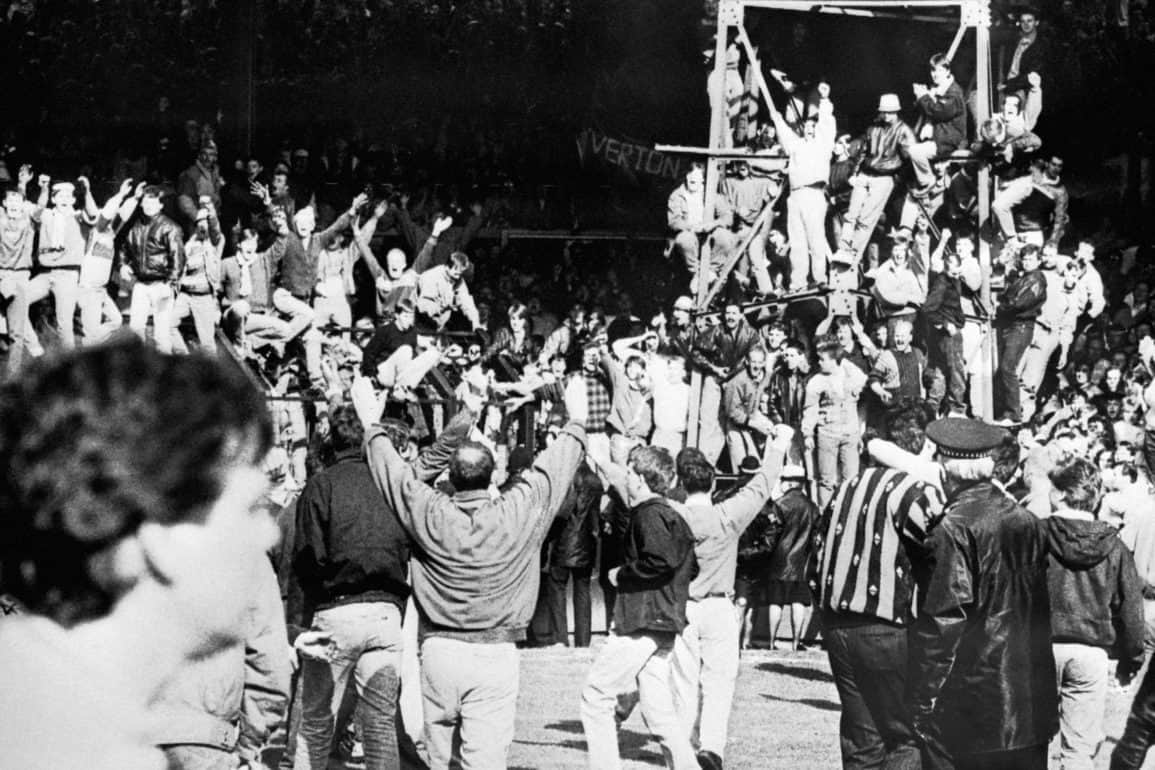 Jubilant Everton fans celebrate on the pitch after their team had clinched the League Championship following their 1-0 win over Norwich City.

The 1985/86 season had been a tough one for Evertonians. Although filled with good games and good moments, it had ultimately been one characterised by misery and frustration as the club was pipped to both the title and the FA Cup by Liverpool. By the narrowest of margins, Everton had turned what could have been one of the greatest seasons in the club’s history into one best forgotten.

It was a campaign that ended with both teams touring the city in open top buses: trophy-less Everton parading in advance of silverware-laden Liverpool. For the Blues who attended in an act of near-pathological loyalty, it was a dark moment.

The summer that followed had then thrown up its own challenges. The club’s top scorer, Gary Lineker, was sold to Barcelona, and there were rumours that Kendall might follow him to Spain too. Although this latter fear never materialised (at least that season), when the campaign kicked off, Everton seemed to lack the rhythm they had enjoyed during the previous year.

‘Losing Lineker obviously took some adjusting to,’ argues Kevin Sheedy. ‘But, added to this, we also had an extensive injury list, which impacted on our form. Amongst others, Neville was out for a few months and Peter Reid and Paul Bracewell also had lengthy lay-offs. It’s always hard to get going when your side is both disrupted and suffering from the absence of key players’.

Those who had been brought in to bolster the squad in the summer, such as the centre-half Dave Watson from Norwich City, the midfielder/defender Paul Power from Manchester City and midfielder Kevin Langley from Wigan Athletic, gamely (and with varying degrees of success) attempted to plug the gaps.

‘Everton were OK as a side,’ says Simon Hart, author of Here We Go, ‘and still knocking around the top of the table, but that sense of fluidity and strength that had become the hallmark of a “Kendall” team seemed to go missing at times. There were reasons for it, but you got the feeling early on that maybe this wasn’t to be our year.’

But any fear that the club might not have what it took to mount a concerted title challenge was partially allayed by Everton’s form over Christmas and New Year.

‘I have always regarded the Christmas and New Year programme’, wrote Kendall in Only the Best Is Good Enough, ‘as arguably the most important period of a league campaign and it was our inspired form between 20 December and 17 January – when we won six games in a row – which was ultimately to prove decisive.’

The title race was very far from over, but, as Kendall also wrote, ‘by winning at places like Newcastle United and Aston Villa we had sounded a chilling warning to our closest rivals.’

Everton’s main rival for the title was Liverpool (again), and despite that strong showing over the Christmas period, the Reds were setting the pace. Between Boxing Day and mid-March, Liverpool established a nine-point lead over Everton (albeit having played a few more games). But that’s when everything changed.

‘In my long years of following Everton I’ve never known anything like it,’ says Phil Redmond of When Skies Are Grey. ‘You expect Everton to fall apart, not Liverpool, especially not that version of Liverpool. But somehow, the wheels just came off their season and Everton kept going. It was wonderful.’

Suffering from a spate of injuries and a draining League Cup run, Liverpool faltered, and by early April Kendall’s team had not only made up the distance but even managed to edge out in front.

‘We then went on another strong run,’ recalls Kevin Ratcliffe, ‘which virtually guaranteed us our second title in three years.  We got that sense of invincibility back, something that had been such a characteristic of the 1985 team. It was as though we just expected to win every game we played.’

It helped that, as the season wore on, some of Everton’s stalwarts returned to the squad on a more settled basis – the kind of experienced and talented players that sides chasing the title needed. But equally handy were some of those additions that Kendall brought in, both in the summer and during the campaign.

Paul Power, bought with the intention of him being a cover player, ended up playing in all but two of Everton’s league games that season, filling in at left-back and left midfield. Wayne Clarke, who arrived from Birmingham City towards the end of the campaign to provide cover up front, scored five goals in ten games during a vital period for the Blues. And last of all, Ian Snodin, signed from Leeds United in January, gave the Everton midfield a much needed boost.

All in all that season, Kendall used 23 players. This was significant by the standards of the time. As a comparison, Liverpool only used an average of 17 in the course of winning their titles between 1972 and 1986.

‘1984/85 had been a team performance when it came to winning the league,’ argues Kevin Ratcliffe. ‘We had a few players, like Kevin Richardson and Alan Harper, who covered and who were absolutely essential. But by and large the team was mostly unchanged for a significant chunk of the season. In 1986/87, everything was about the squad. What we did that year was, to a large part, dependent upon the support players that Howard was able to bring in who did such a magnificent job.’

It was also a squad that managed to rise to the challenge of losing a goalscorer like Lineker by sharing responsibility for finding the back of the net. In the league, Steven led the way with 14, followed by Sheedy with 13 and Heath with 11. Elsewhere, Clarke and Sharp hit five, Power got four, and Stevens, Watson and Mountfield got three apiece. Across the squad as a whole, theirs was a cumulative tally that enabled Everton to top the scoring charts.

With five games to go, this squad of all-talents had the opportunity to tie the title up at Anfield.

‘It never happened, we lost,’ remembers Dave Prentice of the Liverpool Echo. ‘But how wonderful would that have been? Especially as it would have been payback for the misery of the season before. Sometimes you can’t have it all, though, can you?’

A draw against Manchester City at home in the next game meant that Everton had to travel to Carrow Road to tie up the title against Norwich City.

The 5,000 Blues who had made the trip to East Anglia got an early boost when Everton took the lead not long after kick-off with a goal that came from an unlikely source:

‘I have no idea how I ended up in the Norwich penalty area in the opening minutes,’ recalls Pat Van Den Hauwe. ‘But I did! I remember the ball coming across the six-yard box, I think after Norwich had failed to clear a corner and it just sat up nice for me, so I belted it. One Nil! It was the perfect start to the day.’

Despite Everton getting an early lead, Norwich were not cowed. Everton seem to have an unerring knack across the decades of facing opposition on title-winning occasions who seem intent on spoiling the party. The Canaries were chasing their highest-ever league position and before the game had outlined that they were determined to have a go at the Blues.

‘We had 86 minutes to defend that lead, and at times it wasn’t easy,’ recalls Van Den Hauwe. ‘I remember that their winger was giving me a tough game. Norwich were determined not to be rolled over. It was quickly obvious that this would not be a walk in the park.’

But, despite their intent, the home side didn’t carve out too many clear openings. Drinkell and Rosario had two decent first-half headers, but that was the limit of their threat. And at the other end, Everton could have extended their lead on a few occasions, most notably when Bruce had to clear off the line from Steven.

Norwich’s problem was the Everton defence, which according to Ken Rogers in the Liverpool Echo, was imperious:

‘Dave Watson in particular was in commanding form, looking solid and confident against his old club. Skipper Kevin Ratcliffe was an inspiration throughout and both Van Den Hauwe and Gary Stevens showed their international class against lively wide men.’

‘As the end of the match approached,’ says Kevin Ratcliffe, ‘Norwich had run out of ideas and it seemed clear that the title was coming back to Goodison. After the misery of the previous season, that was a glorious feeling.’

As champions that year, Everton became the first club to receive two title trophies: the Today League and the traditional league title trophy (the former being a crappy little trophy that would look more at home at a regional sales awards in the stationery industry).

It might not have been as swashbuckling as 1984/85, but in some ways the 1986/87 title win was more impressive. Against the odds and often with a patched-up side, Everton had triumphed.

‘A squad effort is harder to pull off,’ argues Graeme Sharp. ‘And so, the way that Howard brought players in and chopped and changed the side in response to adversity just showed what a great manager he was.’

Pat Van Den Hauwe’s winner vs Norwich is one of hundreds of Everton moments captured in the Everton Mishmash! Available here.