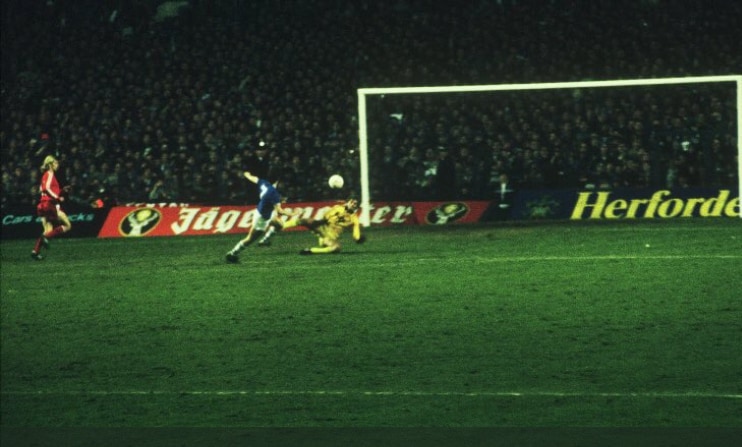 Prior to the 1984/85 campaign, Everton’s record in Europe had been patchy to say the least. In contrast to other big clubs, such as Manchester United, Spurs and Liverpool, all of whom had prospered on the European stage, success for Everton had never been remotely close.

‘And that stung a little,’ admits Simon Hart, author of Here We Go, ‘specifically when set against Liverpool’s record. There was a sense that to match them we not only had to succeed domestically but we also had to thrive in Europe too, just as they had been doing.’

As victors in the 1984 FA Cup, the club had been England’s entry into the following season’s European Cup Winners’ Cup.

After an early scare against University College Dublin, when Everton had made a meal of getting past the Irish part-timers, progression to the semi-finals had been relatively formulaic, following straightforward victories against Inter Bratislava and Fortuna Sittard.

Between the Blues and the final now stood Bayern Munich: European football royalty at its finest.

Marshalled by Lothar Matthäus, and with a side packed with international quality, including Belgian goalkeeper Jean-Marie Pfaff, the abundantly gifted Danish midfielder Søren Lerby and the talented German forward Dieter Hoeneß, the Bavarian giants were widely regarded as the strongest side in the competition and, as further testament to their strength, would go on to win the Bundesliga that season.

The first leg, played in the Olympiastadion München, was a tough game for the Blues. ‘We went out there a bit of a patched-up side,’ remembers Graeme Sharp, ‘missing both Andy Gray and Kevin Sheedy, both of whom failed late fitness tests. I think I played alone up front as Howard really just tried to contain Bayern. The final score of 0–0 was regarded as a success.’

In between the first leg and the second, Everton were kept busy. Not only was a second consecutive FA Cup Final appearance booked (following a 2–1 win over Luton Town in the semis), but in the league the club also maintained that season’s impressive run of form. As the Cup Winners’ Cup showdown approached, Everton topped the division, ten points clear of nearest rivals Manchester United.

‘We were on great form,’ says Andy Gray, ‘playing well and on course to win the title. But that didn’t mean we were necessarily fancied in Europe. Nobody gave us a prayer and it was understandable why. This was the mighty Bayern Munich playing against a bunch of kids and a few old pros like me and Reidy. We were a bit of an unknown quantity I suppose, and so the question for those watching was probably whether we would rise to the occasion or buckle in the face of a more experienced opponent?’

On a balmy night in April, the moment of truth arrived. With Gray and Sheedy fit again, Kendall could put out his strongest side. He was also able to count on the rapturous support of the crowd, nearly 50,000 of whom were wedged inside Goodison.

‘The atmosphere that night was incredible,’ remembers Graham Ennis, editor at the time of When Skies are Grey. ‘Think of any other great Goodison occasion and then times it by ten. The place was heaving and the noise was breath-taking. You could hear the shouts in Bootle! You have to remember that there were only about 50 Bayern supporters there. We had 50,000 Blues, under the lights and completely behind the side. The crowd was like an animal, some threatening beast that was determined to get Everton through.’

In the first half, Everton were unquestionably the better side. But, despite their evident dominance, clear-cut chances were limited. Sheedy came close with a free kick, Sharp with a header, and there was also a decent penalty shout when the ball appeared to strike the arm of Dremmler in the box.

‘I don’t think Bayern knew what hit them,’ says Andy Gray. ‘Compared to other performances that season, we weren’t playing with the same degree of fluidity. Instead, physicality seemed to have been given more emphasis. That was the game plan and it worked. Bayern looked rattled.’

The Germans, both during and after the match, were not happy with Everton’s physical approach. At one point, Bayern’s manager, Udo Lattek, protested to the Everton bench, shouting, ‘Kendall, this is not football.’ The response from the bench, according to Kendall in Love Affairs & Marriages, was a loud and unanimous ‘F**k Off!’

In a later interview, Kendall outlined that this approach had been deliberate. ‘We decided before the game to bomb them. I felt the best way to approach the tie was to put them under immediate pressure. The Germans were never able to settle, with the strikers challenging for everything. With the tackles flying in, Bayern were never going to be able to clear decisively around the box and the key factor was picking up the second ball.’

And yet, despite Everton’s physically domineering approach, it would be the Bavarians who would take the lead. Against the run of play, Kögl played a neat one-two that caught Everton’s high defensive line off guard. He charged through on goal and attempted to go around the onrushing Southall, who, to the crowd’s delight, managed to check his run. Unfortunately for Everton, the ball bounced off Southall’s chest to Hoeneß, who took his time and calmly put the ball past the two defenders who had got back to cover the line. The scoring of a vital away goal now meant that Everton would have to score twice (and concede no further) to progress.

‘The moment that ball went in it was like someone had deflated a balloon,’ recalls Andy Gray. ‘Just for a second, all the life was sucked out of Goodison. But, to the credit of the fans, it didn’t last long. Within moments, they were up again, willing us on to get an equaliser.’

Despite continued dominance, Everton went in at the break one behind. Kendall revealed his half-time thinking in Only the Best Is Good Enough:

‘The tension in our dressing room at half-time was so palpable that you felt you could reach out and grasp it. I told my players not to worry but to carry on playing as they had been. One of the important things was that we would be attacking the Gwladys Street terracing in the second half, a section which is made up of supporters so fanatical that, at times, they seem to be almost capable of sucking the ball into the net.’

Within minutes of the start, that’s just what happened. Stevens launched a long throw into the box, which Gray was able to flick on into the six-yard box.

‘I got in front of my marker,’ recalls Graeme Sharp, ‘and was able to get the deftest of touches on the ball, just enough for it to bobble into the bottom corner. I remember the noise from the crowd after that. It was like nothing I had experienced before.’

The atmosphere, which had been electric all night, appeared to become even more charged. According to Andy Gray, when added to Everton’s physical approach, it tipped the balance in their favour.

‘I’d not heard a noise like that crowd. And you could see that Bayern were suffering. It was intense. And they were also finding our physicality harder and harder to cope with. When you saw their players lying down on the pitch whingeing about a particularly tenacious tackle, then psychologically you knew we’d got the better of them. And that was a hugely important part of the battle.’

For the next 20 minutes, the Blues hustled and bustled, creating a few decent chances and barely letting the Bavarians get their foot on the ball. Even though at 1–1 Bayern were still in the stronger position, it only ever felt like one team would emerge victorious and that it was a case of when rather than if another Everton goal would come. When it did, with 15 minutes left, it came courtesy of Andy Gray:

‘Another huge throw-in from Gary Stevens came into the box,’ Gray recalls, ‘where the Bayern keeper and a few defenders managed to miss the ball, which then fell perfectly for me to sweep it into the net. I remember the noise from the Gwladys Street almost hitting me when the ball crossed the line.’

For those watching on, the feeling was near indescribable. ‘It’s hard to put into words what it felt like,’ says Graham Ennis. ‘I think we all knew that Bayern were the best we would face and that this Everton side could beat what was left in the competition. So, not only had we come from behind against a giant of the game, we thought we were on our way to a final that we could win.’

And it was about to get better. ‘With a few minutes left I found myself with the ball in the left-back position,’ remembers Kevin Sheedy. ‘I looked up and was waiting for Andy Gray to make a run, all the while having 50,000 Blues screaming “man-on”. When he did, I pinged the ball through.’

Gray took the ball in his stride, controlled it and then threaded it past Nachtweih to Trevor Steven, who had surged forward in support. With the keeper and Nachtweih closing in on him, Steven took the ball a few paces and chipped an elegant finish into the back of the net – spinning off, right arm held aloft as the entire stadium ignited.

‘It might have been the valium coursing through my body (given to me by a nurse in work to cope with the nerves),’ says Phil Redmond of When Skies Are Grey, ‘but what a night that was. Anyone who was there could never forget it. It was magical. A one-off! The greatest game to ever take place at Goodison and an atmosphere unmatched.’

Everton won that night because they wanted it more and were prepared to put aside the football that had worked so well in the league and adopt a more primitive, but no less effective, approach to the game. It proved what a shrewd tactician Kendall could be, and, more importantly, it had booked the Blues a place in the club’s first-ever European final.