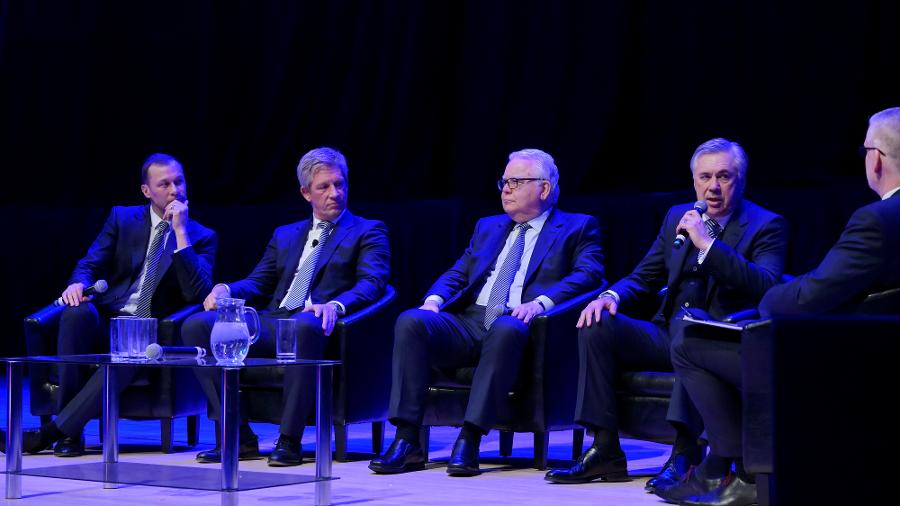 It is safe to say that Everton do an AGM like no other organisation. After announcing a lucrative £30 million purchase of “an option” for the naming rights to the new stadium from billionaire Alisher Usmanov’s USM holdings, proceedings switched rather surreally to the unveiling of a statuette of club legend Alex Young. In order to make this unveiling “more relevant”, the Sculptor a Mr Kelly admitted that he’d been asked at the last minute to add the name of the clubs new manager Carlo Ancelotti to the base of the statuette. At this point Carlo himself was invited up from the audience to admire Mr Kelly’s “Golden Vision” and in the process received a bit of a history lesson on Everton Football Club.

You can just imagine that club chairman Bill Kenright had seen the said statuette a few weeks earlier and like a proud Primary School Headteacher insisted thar Mr Kelly bring his creation along to to show it off to all of the parents (shareholders) at the annual “big assembly”. Despite being placed in a rather awkward situation, as expected Mr Ancelotti quickly demonstrated his renowned adaptability and warm personality, making every effort to appreciate Mr Kelly’s fine efforts. It is as a result of these qualities that some of Europe’s finest players, including Cristiano Ronaldo hold Carlo Sncelotti in such high esteem.

As Marcel Brands said tonight, the timing was very kind in providing Everton with the opportunity to recruit a manager with such an incredible CV and reputation. It is well worth repeating that OUR manager has won the European Cup/Champions League 5 times, twice as a player and 3 times as a manager, with 3 different clubs. He’s also won numerous League titles including Serie A (as both a player and a manager) and the Premier League and Bundesliga as a manager. We of course must not forget the UEFA Super Cups, FIFA Club World Cup and countless domestic cups (including the FA Cup) he has won as a manager. One thing is very clear, we now have a Manager second to none, an individual who has true gravitas. I was majorly impressed by how he dealt with the reaction to the Anfield defeat in the press conference prior to the Brighton game. There was a real aura of calm throughout and Carlo’s humour in dealing with the “Finch Farm 7’s” training ground ambush diffused the situation perfectly.

In many ways he reminds me a little of Howard Kendall. He has that special personality that so many of his players have consistently gravitated towards. His players genuinely enjoy socialising with him (look at the fact that Terry, Lampard and Cole took him out for the night after he was dismissed by Chelsea). Like Kendall he’s a little bit “old school” in many ways, we’ve all seen the images of him puffing away on his cigarette on the touchline, it reminds me so much of Howard with his drink in hand.

Yet like Howard he’s clearly very tactically astute and is highly adaptable in his approach. He’s already shown he’s not afraid to go direct if either the situation or the limitations of his players benefit from it. After years of Martinez and Silva being ideologically obsessed by a set tactic, which has seen players being shoehorned into roles they just weren’t capable of, its a hugely refreshing change.

With excellent recruitment as we have seen at Manchester City, such formations and tactics can work wonders but Everton’s recruitment has far too frequently not delivered players that fit with the managers’ desired 4-2-3-1 tactic. Even under Marcel Brands, who I rate, there have been failures in recruiting players matched to the demands of the formation favoured previously by our clubs coaching staff. Brands did make a concerted effort tonight to say that Zaha was never a realistic target this summer. Yet the Iwobi transfer came out of nowhere in the last few hours of the transfer window, after weeks of talk of Zaha (which even included Zaha himself handing in a transfer request, based as he admits on Everton’s interest). Likewise Iwobi himself has openly expressed his surprise at the speed at which his last minute deadline day transfer to Everton materialised “out of the blue”.

It was clear from where Iwobi was primarily utilised by Silva this season that he was brought in to playthe wide right forward “Zaha” role. What is blatantly clear to anyone who has watched him play for Everton is that he lacks genuine pace. This is something that should have been obvious from any scouting report or simply from communicating with Arsenal fans who watched the player week in week out.

Silva clearly wanted a wide right sided player with good, or even exceptional pace to compliment Richarlison on the left. A player capable of interchanging with Richarlison to unsettle opposition fullbacks. Silva quickly realised he hadn’t got that type of player, which resulted in Iwobi becoming a less frequent starter in that position. I must however add that I believe Iwobi has a future at Everton as he has shown, sound technical ability, good physical strength, a good awareness of his teammates position, and an ability to find himself in goalscoring positions.

I am genuinely excited for what I’ve seen from Ancelotti so far (minus the Anfield debacle). Those elements of Ancelotti’s character that remind me of Kendall make me feel even more nostalgic for those glory days of the 80’s. The likelihood of course is that Ancelotti will never come close to matching Howard’s achievements at our club but I’m so excited to see him give it a go!