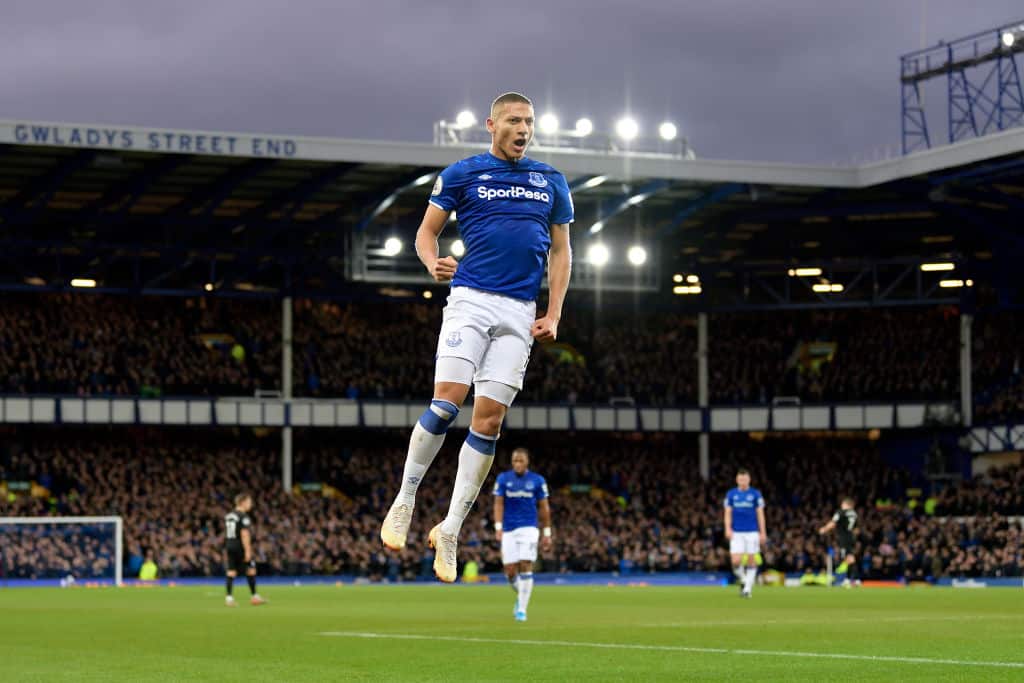 Richarlison the difference as Blues stutter to victory

Not the most convincing performance from Everton, but Carlo Ancelotti will take some heart from a hard-fought victory with Brazilian forward Richarlison earning the points with an excellent first half finish.

A massive game for Everton after a week of trials, tribulation, supporters anguish, alledged player reactions and much, so much, wailing and gnashing of teeth.

Carlo Ancelotti addressing the media in his pre-match press conference countered claims that one or more players had reacted to dressing room criticism of their performances in the FA Cup defeat last weekend saying, “The spirit in the squad is good. There was disappointment over the game against Liverpool, but we have to look forwards. I understand the fans frustrations, it is normal when you lose a derby. I hope tomorrow the atmosphere will be good, we need the support of our fans and a great performance to react well. We have worked well this week and I hope tomorrow we will give a good performance and most importantly, try to win… our target is to go up the table.”

In respect of strengthening the squad in the January window he commented, “If there’s a possibility to improve our squad, then that is what we’re going to do. I cannot mention names, but all the names in the papers are wrong.” He notably added, “We’re not looking for a goalkeeper, we want a player that can improve the quality of the squad.”

In brighter news, whilst confirming that Alex Iwobi, Jean-Pierre Gbamin and Andre Gomes were all still unavailable, Don Carlo advised that he expected Gomes to begin light training as early as next week and that he sees that as being, “good news, he is doing very well.”

With no other injury concerns and news that Cenk Tosun has gone to Crystal Palace on loan for the rest of the season, for the visit of Brighton, the Don selected our starting eleven thus: Pickford, Sidibe, Keane Holgate, Digne, Walcott, Sigurdsson (c), Davies, Bernard, Richarlison and Calvert-Lewin.

Our visitors, Brighton, meanwhile don’t envisage any or much activity in the transfer market as head coach Graham Potter confirmed, “I’m very happy with the group, happy with everybody. If nothing happens with this group and we work between now and the end of the season, I’m totally fine with that. At this time of year, people link people with different clubs, that’s just the noise of the transfer market.”

Whilst he didn’t envisage any incoming to the Amex Stadium, rumours suggest record scorer Glenn Murray could leave Brighton on loan before the end of the month in order to secure more regular game time. Potter was definitely without defender Dan Burns and Solly March, but had Murray available while loanee Aaron Mooy would face a late fitness test, as he looked to record a first ever win for the south coast team at Goodison.

On a blustery, cool afternoon, our referee was David Coote.

Brighton with an early free kick after a could by Sigurdsson on Jahanbakhsh saw a momentary hesitation in the Blues defence before Pickford claimed the high ball. Everton got forward and Walcott bursting into the area appeared to be clearly impeded, but the referee and eventually VAR decided otherwise, much to the annoyance of another full house at Goodison.

It had been a decent opening quarter hour from the Blues, looking to get the ball forward with Sidibe and Walcott working well together. However, they let the tempo drop over the next few minutes and Carlo Ancelotti was animated on the touchline imploring for them to move the ball quicker and more decisively.

Bernard released DCL down the left and he turned to chip a cross yo the back post that again, was just too strong for Richarlison to get on the end of. The next attack came down the right with Sidibe and Walcott working the ball to Bernard for a shot that appeared to hit a defenders hand, but there was no review.

On the half hour there was confusion as Richarlison went down off the pitch on the Main Stand side with nobody on the bench realising, Holgate putting the ball into touch to raise awareness.

The first save of the game came on 36 minutes as Keane found Davies, onto Bernsrd and he found Richarlison on the right for a powerful low shot that Ryan in the Brighton goal did well to get down to.

The deadlock was broken two minutes later as the first really incisive pass from Sigurdsson saw Bernard find Richarlison in the Brighton area and he twisted away from his marker to curl a beauty beyond Ryan into the far corner.

At the break, Carlo Ancelotti will have been pleased to have the lead but would surely have told his team to be more assertive in possession.

No changes by either manager for the second half that the Blues began brightly before a loose ball from Digne was picked off by Trossard who got away from both Sigurdsson and Davies only to shoot weakly wide.

Everton won an early free kick and corner but neither produced any end product and then Duffy with a long ball found Trossard who controlled, cut inside and saw his shot beat Pickford but hit the crossbar.

Sidibe found Digne with a cross field ball to play a one-two with Bernard for his cross to be blocked for another corner. Everton still weren’t firing on all cylinders and Brighton were proving tough to break down.

Brighton made a double change on 61 minutes, Alzate and Gross replacing Jahanbakhsh and Montoya before two more Everton attacks came to nothing on poor final balls from Sidibe and Bernard.

Sigurdsson fed Walcott for a deep cross from the right that Bernard reached to find DCL, Ryan blocking his close range shot. Holgate, cool in defence, found Digne and his long ball for DCL saw the forward fouled but still get his shot away, Ryan again saving well to keep it to just one-nil.

Everton survived a scare on a Brighton raid as a cross from Gross saw Holgate head behind, just over the crossbar. Changes came on 71 minutes, Fabian Delph replacing Bernard and Murray replacing Stephens for the visitors. Seamus Coleman came on three minutes later for Walcott.

Everton had a second goal ruled out for handball in the six-yard area, Pickford made a good stop to deny a good header from Murray, and Carlo Ancelotti decided he needed more height at the back on 83 minutes, Mina replacing a tiring Digne.

Another late scare saw Murray get on the end of a loose ball, thankfully his effort beating both Pickford and the outside of the post.

Four added minutes were signalled with Brighton still not beaten into submission and Everton defending doggedly. Pickford was booked for protesting too hard over a Duffy foul on Holgate.

And Goodison breathed something of a collective sigh of relief at the final whistle, and three hard-earned points secured.