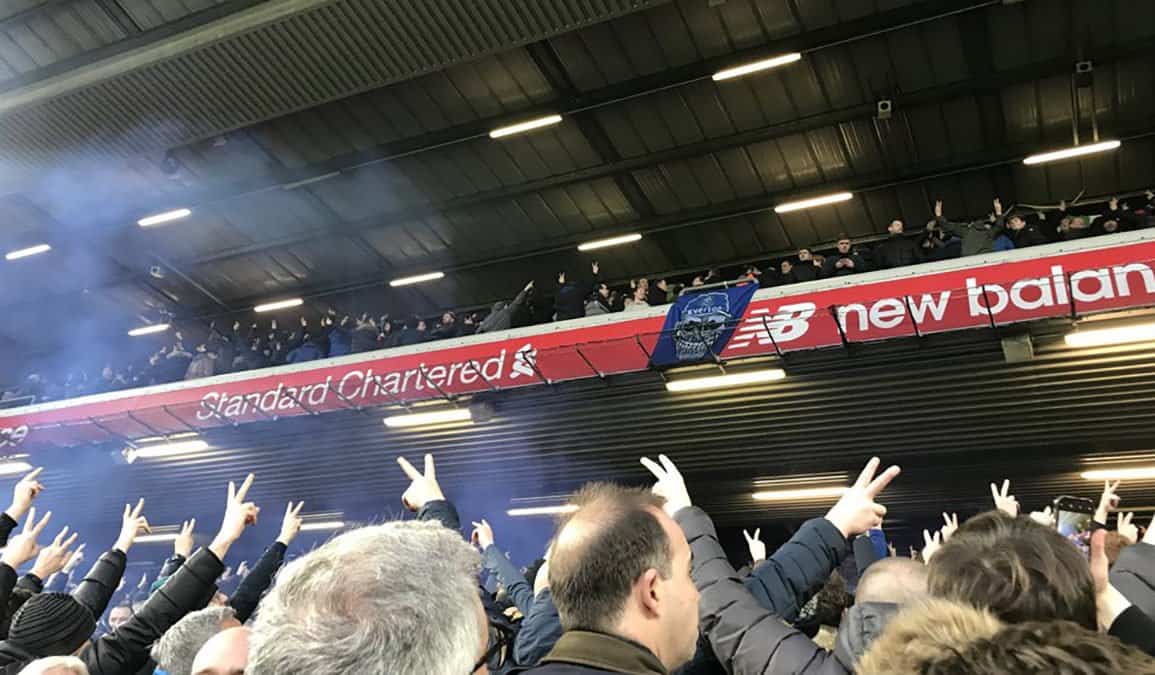 The defeat at Anfield in the 3rd round of the FA Cup seems to have shattered any notion of an early honeymoon period for new manager Carlo Ancelotti. What would have undoubtedly seemed an imposing task at Christmas was qualitatively ratcheted up following a pitiful Anfield defeat. It presents the sort of epochal moment for the new management team far earlier than they would have wanted or ideally liked to have seen.

There is a good argument to say that the performance put in at Anfield was the worst we have seen over the last 20 years or so. In a single moment, all of the worst aspects of the club were laid bare in a glaringly transparent manner in front of the nation on live terrestrial television. While the game seemed an annoyance for Liverpool, for Everton it could well be the most significant game of the season thus far, being it was the biggest competition they could realistically win. In the moments after the defeat, the parallel realities of being trophyless for 25 years, not winning at Anfield in 20 and not winning a derby in nearly 10 years became as blunt as a needle in the eye. That the defeat was imposed by a weakened Liverpool side that for large portions of the game looked as if they were waiting for defeat to be confirmed is a cruel complication to add to the morose feeling of emptiness that followed the game.

We could linger on the game itself, though I would posit that the wider significance of the event provides more of a wake up call than the specificity of the match itself. From a tactical viewpoint I felt we tried to maintain possession in dangerous areas (our own third) too often. It invited Liverpool onto us and gave their players and crowd greater enthusiasm and confidence than was necessary. In defence, Mina and Coleman are not comfortable in possession and in midfield neither Schneiderlin nor Sigurdsson want the ball. For Liverpool’s younger, more energetic team, Everton trying and failing to build from the back was akin to a red rag to a bull and encouraged increasingly ambitious pressing. This was never dulled by Everton taking the pragmatic option of firing the ball over their heads and having them chase backwards.

The disappointment above is only doubled when we consider that Liverpool had looked particularly susceptible to leaking chances in the first half on the few occasions Everton were a little more direct and put a combination of passes together. Phillips who had looked badly out of his depth in the first half was able to watch the 2nd half with the play in front of him and centre forward Calvert-Lewin primarily occupying his partner Joe Gomez. If there was a game plan that Liverpool manager Klopp would have wanted Everton to try to play, it’s hard to think it would have looked closer to the one we tried to play.

Inevitably some of the blame for this will have to lie at the door of Ancelotti. Though he is just 2 weeks into the role I am a little surprised as to why utilising 2 strikers and playing in a more direct way has been jettisoned so quickly. I have serious concerns in the short to medium term if he wants to try to transition the group of players he has into a group that will be able to play out from the back. Consecutive managers (Martinez, Koeman & Silva) have all opted for this approach, and each of them have died on that hill. I have serious reservations that Everton seek to go down this path again.

More broadly though it is the players that have to carry the blame for such an abject failure. The idea that Everton can or should turn on Ancelotti is absurd. Everton will never have a better manager than him. It’s worth noting that the performance was not a bolt out of the blue, but in many cases confirms only concerns that have been long held amongst Everton supporters for some time. Coleman, Walcott, Schneiderlin and Sigurdsson now have to be under serious scrutiny.

The easy answer is all should be sold or moved on. This is easier said than done. Everton sit half way up the league and there will be a perception from other Premier League teams that if they are not good enough for Everton, then why would they be good enough for their own team? This problem becomes intensified when you consider the sizeable wage packets that players are meant to be commanding. You have the same problem when selling abroad, quite simply the wage considerations of the players involved make it improbable that teams on the continent can sign players. The consequence and legacy of spending money badly is ultimately lingers on for the duration of a players contract. There ought to be serious questions asked of all of those on the board, including it’s chairman who is the one constant through what has been a shambolic 4 years. Have employees of the club been held to account to the right degree, and if not why has the chairman been unable to do so?

The acceptance of that reality presents a unique difficulty for Ancelotti. The 4 names mentioned above are by no means the worst offenders. There are messers Niasse, Tosun & Martina who contribute less than the 4 culprits mentioned, while players returning from loan (Sandro & Bolasie) arguably present a bigger headache for the manager. There is also potential question marks over players such as Michael Keane, Jordan Pickford and to a degree Fabian Delph. The level of re-build required remains sizeable and is arguably growing rather than shrinking.

However while the blunt realities of the market may prevent an optimal the alternative could also prove to be very damaging. There are certain defeats that signify a turning point in the minds of spectators. Wembley in 2012 seemed to mark the beginning of the end for manager Moyes in the eyes of many Everton supporters. The defeat in the quarter finals a year later seemed to spell the end for Phil Neville. The defeat of Sunday feels like a moment whereby certain individuals reputation will simply not recover in the eyes of the spectators. How Ancelotti manages this situation will prove interesting but there is no good option. I doubt many of the supports will want to see either Schneiderlin or Sigurdsson playing for Everton again.

The final indignity of the club for the club has been the acknowledgement that the process of developing and bringing through local players, at least on the evidence of the weekend has fallen by the wayside. Many of the young players playing for Liverpool have been involved with youth teams have either been defeated heavily by Everton teams, or alternatively finished below them in the league. While there is some speculation as to Everton putting out older teams (this is simply untrue, the average age of the 2 under 23 teams last season was 19.6 v 19.4) there now have to be serious questions asked about why the production line seems to have dried up and so few players are being given opportunities.

There are legitimate questions as to where are “our” young players. The answer is more complex. Some of them were on the pitch – Richarlinson (22) Calvert Lewin (22) Kean (19) & Holgate (23) all played. Everton have also been happy to move on young players for decent money (Lookman & Vlasic) and also loaned a number out to the championship (or eventually sold them) in the form of Connolly, Dowell and Williams (with Kenny going to Germany). Of the next generation Anthony Gordon’s minutes have been restricted and there seems to be some reticence on offering Lewis Gibson a contract (which given the caliber of clubs interested in him seems a little odd). Last season Mason Holgate was deemed surplus to requirements and loaned to West Brom to play right back, yet this season has reasonable argument to have been our most effective central midfielder and defender. It hints at a system that is not working as efficiently as it ought to do.

It would seem to me from the list above there are players being generated of sufficient quality for the first team, but the transition once they make the step upwards is not being handled as well as it could be. In truth the club have sought a sequence of short termist managers who have prioritized paying older players substantial sums of money and in return for inconsistent and ordinary performances. Had Ademola Lookman been given the game time enjoyed by Walcott might he have ironed out some of the rougher aspects of his game? Had Joe Williams or Keiran Dowell been given a run of games, could they have done much worse than Sigurdsson & Schneiderlin on Sunday? (and thus saved the club upwards of 60 million in transfer fees.) The lesson provided to Everton by city neighbours would appear to go beyond just a defeat on the pitch, but a wider one about optimal development of a clubs assets.

Much of this will now fall under the remit of Marcel Brands. If there is one area Dutch clubs are famed for it is the development of a supply line of talent and it is something Brands himself has spoken of and evidenced in his roles at Alkmaar and PSV. The club now have a manager who has enormous expertise (and who may take a more hands on role in terms of recruitment) which may allow Brands to focus upon strengthening the structures in the club, improving the pathways for younger players and increasing the quantity and quality of young players we have at the disposal of the first team manager. 18 months in, we have had yet seen precious evidence of these things from the Director of Football.

While ensuring safety is the primary focus (and could be achieved over the next 5 games) there has to be better successional planning once that is achieved. While some of the players named above may be required in the short term, few would advocate them having a long term future at the club. Players such as Anthony Gordon (and potentially other younger players) ought to be given exposure as the season goes on over players who we would like to move on in the medium term. This diktat ought to come from the very top and would at least symbolize the introduction of an element of both successional planning and ruthlessness that has been sorely missing at the club for a long period of time. It may also allow for some trust between the club and it’s supporters to begin to be rebuilt.